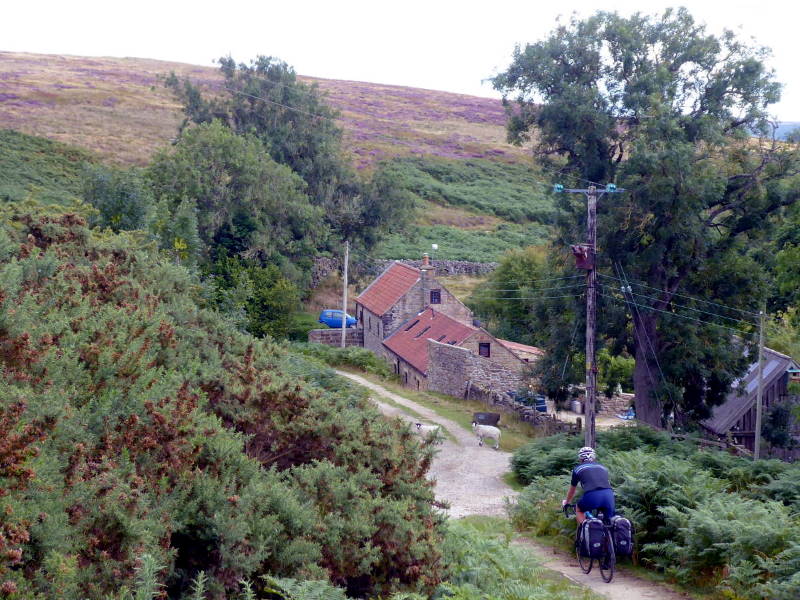 My friend Mark Wedgwood is on a remarkable journey right now: cycling all 204 OS Landranger maps, in order. It’s a 7,000-mile odyssey that will take him everywhere in Britain. To exotic, far-flung places even I’ve never been, like St Kilda, or Skegness. He’s blogging about his journey at ridealltheosmaps.co.uk, and Instagramming on @ridealltheosmaps.

Today I joined him for the final day of his twelfth west-to-east coast-to-coast (a three-day traverse from Whitehaven to Whitby, OS89 to OS94) by riding with him from Darlington and across the North York Moors to the end. It was a very enjoyable day of trim village greens, flat quiet back lanes, and hilly roads across vivid purple moorland.

Most of the images I took from today’s ride consist of Mark’s back in the distance. After three months of cycling about 70 miles a day, he’s faster than me. But some tectonic plates are faster than me.

There were several climbs of 25%. Which, coincidentally, was the same rating I gave our lunchtime cafe, perhaps best left unnamed.

Anyway, we finished our superb ride at the harbourside in Whitby, where Mark rendezvoused with his wife Jenni, and we all enjoyed some fine fish and chips and a pint or two. After that, they adjourned to the Little Angel pub for that premises’ microbrew accompanied by karaoke. I, too, spent a few hours in a boozy atmosphere with out-of-tune singing. Not in a pub, but on my train back home via Middlesbrough.

Mark’s journey will continue through September and October, finishing down in south-west Cornwall.