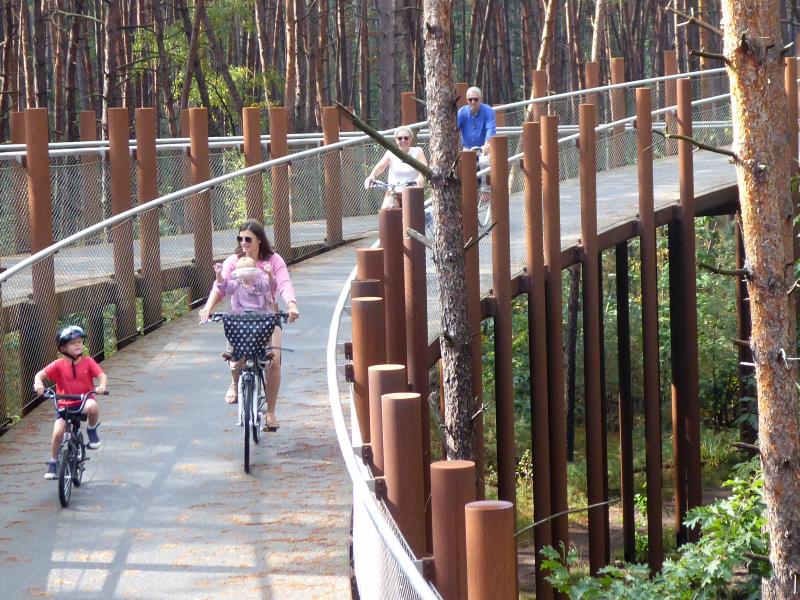 I’m Interrailing with a folding bike for a few weeks with my pal Nigel. Thanks to a special offer earlier this year, I snapped up a two-month free pass for trains around Europe for 327 euros. That’s about £285, which is less than my average monthly energy bill these days. Sadly sleepers aren’t included, which stymies any jokes on the lines of ‘it would be cheaper to…’

Anyway, after a Eurostar from London, and then pitching up in Antwerp last night, we had our first day proper today. We enjoyed two of Belgium’s unique cycle attractions, Fietsen door de Bomen and Fietsen door het Water: ‘Bikes through the Trees’ and ‘Bikes through the Water’. Unique they certainly are. In fact, there’s nothing else like them. More than that, they’re one-offs.

Both were installed recently to encourage bike tourism in Limburg province, in the northeast of Belgium. The initiative is clearly working, because both were very well-used, attracting high-status international visitors from places like York and Cambridge, with names like Rob and Nigel.

‘Trees’ came first, a few km outside Leopoldsburg along gentle back lanes and paths through flat farmland and woods. It’s a double-spiral circuit of bike path raised on metal pillars whose natural rust colour makes them look like wooden poles, and in principle it only takes a few minutes to scoot around its gently counterbalanced rise and fall.

In practice it takes longer. Lots of people, including those high-status international visitors on folding bikes, do it twice or more. And almost everyone stops to take selfies en route, often pedalling slowly, videoing themselves on their phone as they do so, to a self-narration in a world language.

The age range was fairly large, from a few-months baby to ninety-year-olds on upright e-bikes; the bike types were across the spectrum, from basketed shoppers to carbon-frame racers. Diversity is good. I’m a great fan of diversity, so long as it doesn’t include people who aren’t.

All very relaxing and tranquil, especially because there’s no nearby car park, and no cafe, bar or gift shop. Just a path through the trees, and a lot of cyclists.

An hour or two of railtrail later (very good railtrail, smooth and asphalted and wide, through pleasant unscruffy woods, with the odd counter measuring today’s and this year’s bike traffic) we go to the second attraction. Its logo of a bike half-submerged by waves suggests more jeopardy and greater adrenalin than it actually delivers – but it’s another delightful bike thing.

‘Water’ is often described fancifully along the lines of a plummet underwater, a submarine experience. In fact it’s little more than a trench across a compact lake in a woods-and-water park outside Hasselt. The floor dips down so that in the middle, your head is at the level of the water surface either side.

Riding ‘Water’ isn’t much of a thrill, to be honest, but it’s a must-visit destination because of the vibe. It’s busy with all sorts of cyclists, like ‘Trees’, surrounded by nature and calm. Most fun is to sit on one of the benches on the south side and watch cyclists glide down into the trench and turn into heads apparently sliding along on a conveyor belt. Like ‘Trees’, there are no shops or cars or cafes. It’s lovely.

Less lovely was being stung immediately after by something winged and malevolent. My left forearm has swelled up like Popeye’s and feels like a footpump is inflating it at the wrist. I won’t be playing the accordion tonight.

We checked into the friendly industrial-chic hostel in Hasselt. On the reception guy’s recommendation we walked to Café René – on a cobbled street in the old town’s pedestrian district – for our evening beers, which proved an excellent decision.

e2e.bike > Other > Interrail > Interrail 1: Forest jump –through Trees and Water in Belgium