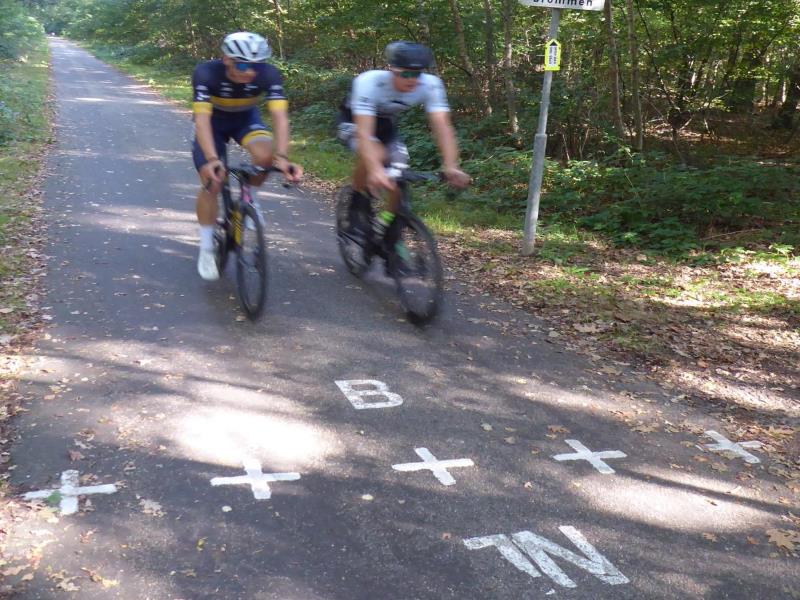 Baarle is a jigsaw puzzle of a town, with some pieces in Netherlands and some in Belgium. Various border disputes over the last century or two (resolved in the European High Court) have resulted in a fractal geography where there are lots of detached bits of one country in the other, some too small to play a game of volleyball on.

Lines of + marks helpfully delineate the boundaries, and their often arbitrary nature – this house and next-door-but-one are in the Netherlands, but the one in between in Belgium – is all part of the charm of the place. Nigel had set his Garmin to beep whenever we changed country, and we could hardly hear each other talk.

From Hasselt we took a morning train or two to Turnhout, and cycled along the (smooth, tarmac, of course) railtrail north to Baarle. After a supermarket lunch on a bench admiring the various enclaves and exclaves – and still not being entirely sure when we should use the one rather than the other – we carried on along the trail to Tilburg.

I was beginning to suffer significantly from yesterday’s insect sting, with my left forearm resembling a child entertainer’s failed balloon sculpture. It was throbbing and painful and I needed to pack it in ice. So Nigel generously agreed to go on a ride for a few hours round Tilburg while I saw in the train station waiting room with a supermarket pack of ice smothering my arm.

There was relief initially but the ice-cube bag proved as leaky as my bladder. The floor was quickly inundated with melted Ardennes spring water, as were my trousers.