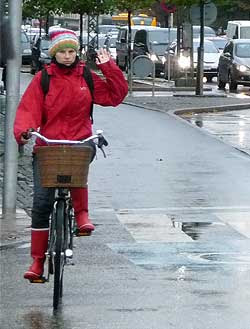 Copenhagen’s cyclists have a hand signal I’d not seen before. It consists of raising one hand level with the head, the palm flat and facing outwards, as if acknowledging a friend (right).

At first you think people are just being sociable and waving to each other, but then you realise it’s a hand signal with a specific purpose. It seems to mean ‘I’m turning left, but not yet’.

Turning left involves crossing an oncoming stream of traffic, because in Denmark traffic drives on the right, instead of London where traffic drives around the Thames Water roadworks. At some junctions, though, you’re not supposed to turn left by waiting in the middle (which you would sign in the normal way by sticking your left arm straight out). 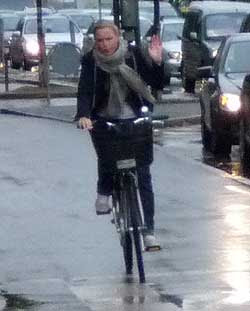 Instead, you join the head of the queue of cyclists coming perpendicularly across you from your right, and wait for the signal to go straight on. To show that you’re going to do this, you do the Copenhagen Wave, like the two lasses in these pictures.

Of course, we have several hand signals in frequent use in London which aren’t in the Highway Code, but I don’t propose to illustrate them.

e2e.bike > Other > Copenhagen v London 4: Not waving but turning