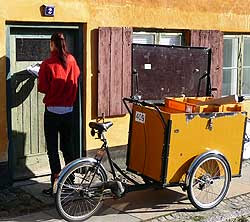 Cargo bikes are a much more common site in Copenhagen than in London.

Denmark’s postal service for instance is keener on delivering mail by bike than Britain’s Royal Mail, which is discouraging the use of bicycles. (And, in the current round of strikes, the use of their own service altogether – though as Bike Radar reports, cycle couriers are apparently benefiting from the industrial action.) 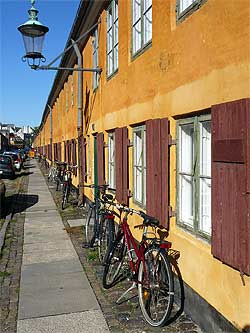 That Copenhagen postie was snapped in the historic area of Nyboder (right), where every ochre-coloured house seems to have a bike outside. Evidently they didn’t build new residential blocks with bike parking in the 1630s, a tradition still favoured by developers in Southwark. 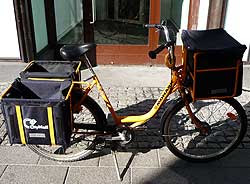 In London, about the only thing you see transported by cargo bike is sandwiches (usually by the Darwins Deli chain). On the South Bank in summer, though, you do occasionally see the odd beer vending or Tourist Information bike.

Things in Copenhagen are on a grander scale, and you see plenty of practical transport solutions like the ones above. I doubt the limo-length fruit’n’veg wagon on the right would cope well with London’s tortuous and cramped cycle lanes though.