So. I was cycling round Ingleton, nestled between the Forest of Bowland and the Yorkshire Dales 50 miles northwest of Leeds, exploring routes for a well-known bike magazine. If you wish you could make a living doing this, well, so do I. 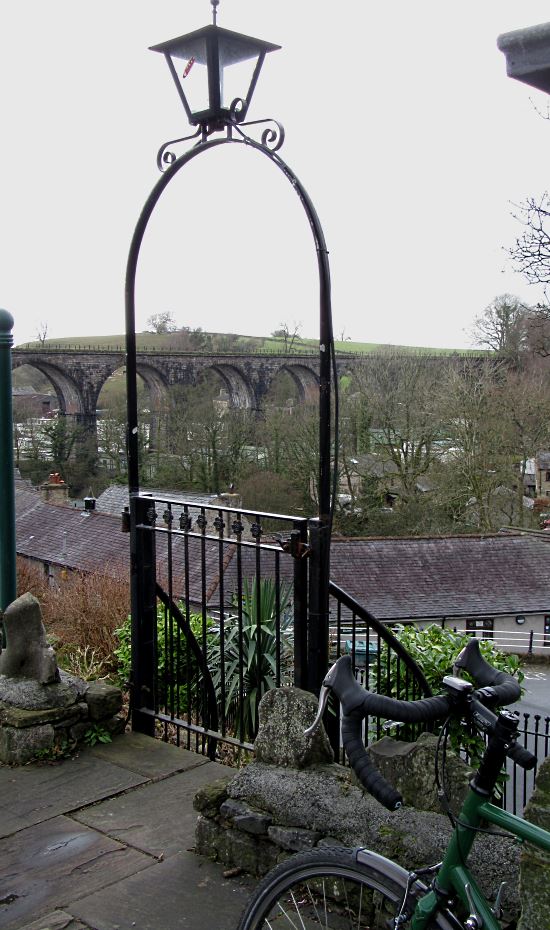 Surrounded by spectacular limestone landscapes, the village is a centre for groups walking the popular ‘Three Peaks‘ circuit (Ingleborough, Whernside and Pen-y-ghent), often for charity.

Perhaps too popular. Locals complain of being overrun by visitors, and the loutish behaviour of some of the trophy-summit trampers, and might prefer that their charity began at home. And stayed there.

Maybe such good-cause mayhem is why the spectacular old railway viaduct across the centre of the village (pic) is closed off to the public: after a few celebratory drinks in the Wheatsheaf, the temptation to lark around on the parapets might prove too much. At least Cave Rescue is only a handful of miles away in Clapham. A charity worth supporting.
Anyway, one of my routes on test was a simple, easy circuit of the Three Peaks by bike – not to climb them, but to see them best as possible from the saddle. The sort of ride that can be easily by done by someone who cycles largely for the excuse to eat cake, drink beer and take amusing pictures. Someone such as me. 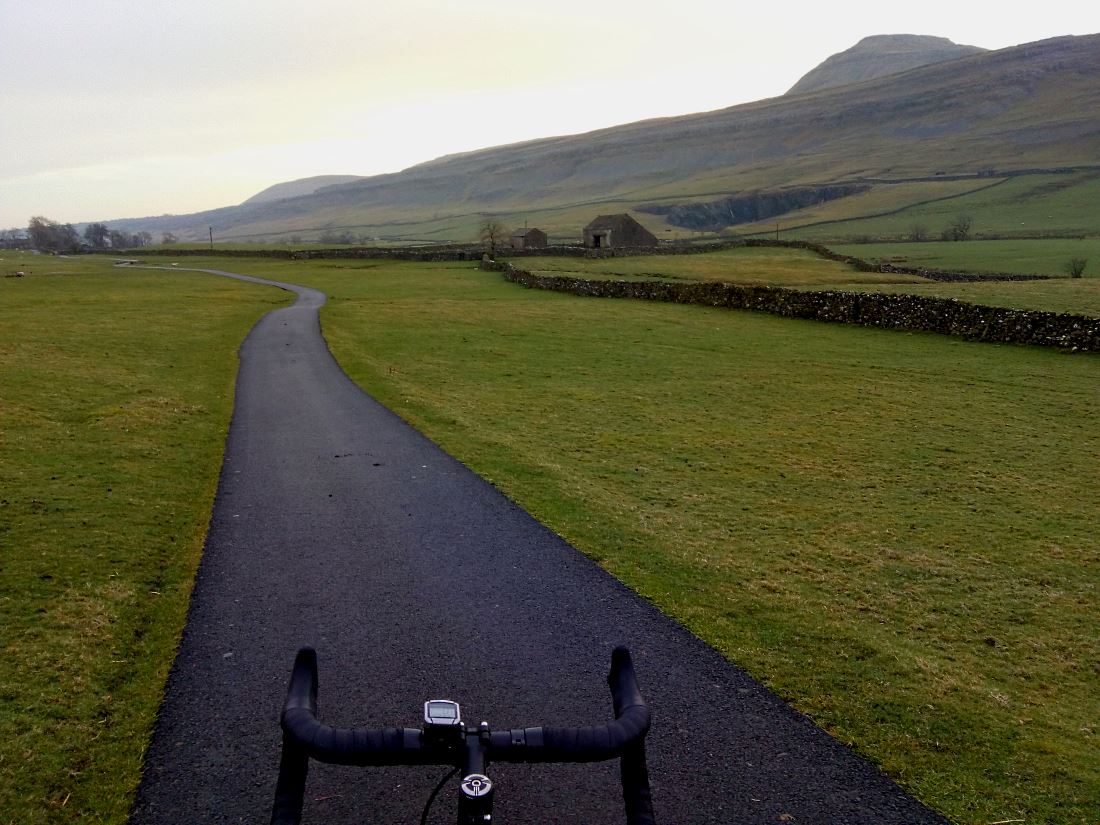 I set off up Oddie’s Lane, which like every other virtually car-free back road I cycled in the area, is astonishingly smooth fresh tarmac: evidently a Tour de France/Tour de Yorkshire spinoff. You could eat your breakfast off it. But, after the stiff climb out of Ingleton that threatened to shake the bacon butty from Seasons’ lovely bakery off my back rack, I was glad I didn’t have to. Fortunately the road, and my stomach, levelled out to give thrilling views of Ingleborough (pic). 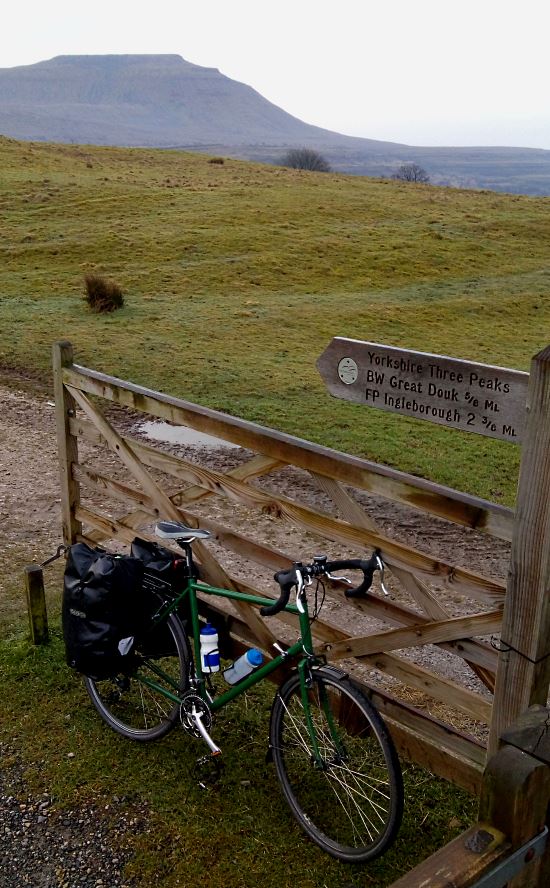 For cyclists wanting to walk up Ingleborough (723m/2372ft, 3hr return) the place to leave the bike is at the Old Hill Inn, just up from which a path goes to the summit (pic). Walkers have been doing this since the late 1800s, which looks the last time the Inn’s exterior was maintained. 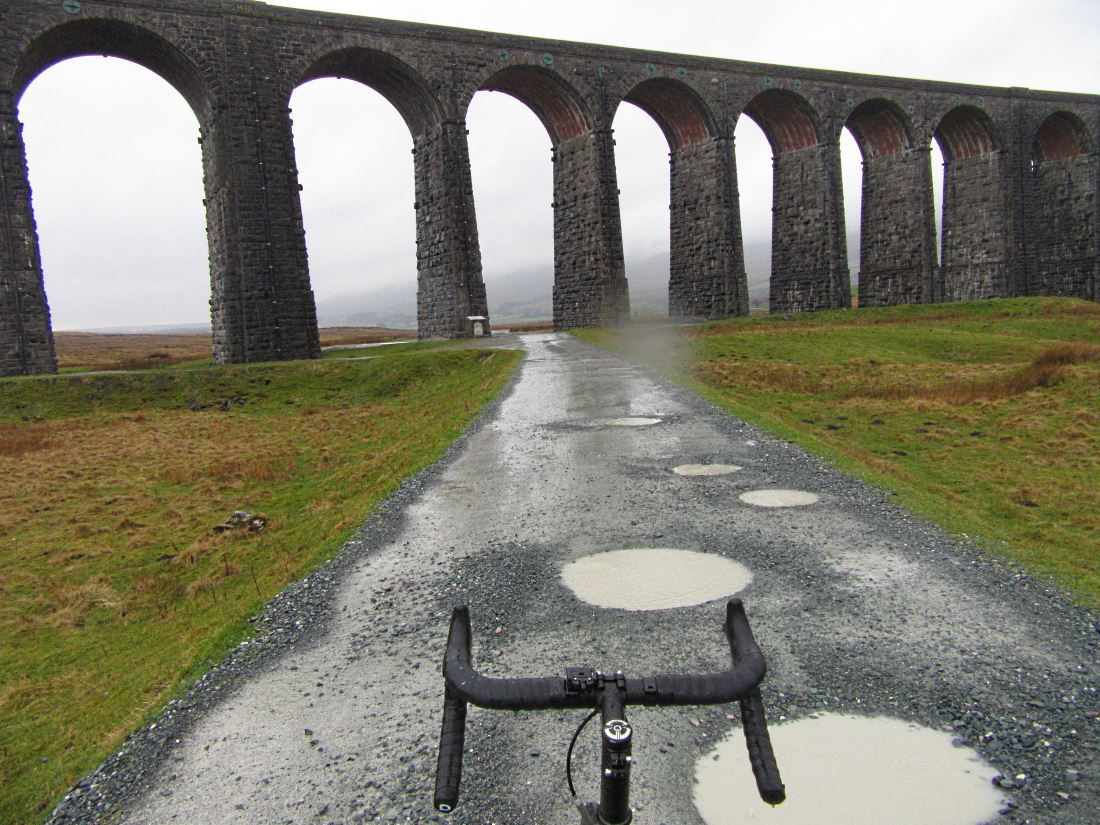 Less than a mile up the road is Ribblehead Viaduct (pic), one of Yorkshire’s iconic sights. Yes, Yorkshire, despite what Visit Cumbria thinks: I work to the traditional pre-1974 boundaries. I’ve now been here four times, and each time I’m filled with wonder. I wonder when the rain’s going to stop.

The summit of Whernside (736m/2415ft, 2hr return) was somewhere up there in the clouds. It was gloomy, wet and grey, and so was I. There was nowhere to shelter and dry off at all. Except for the adjacent Station Inn pub, which luckily had something flaming yellow, warming, and real: ale. Er, and a fire, too. 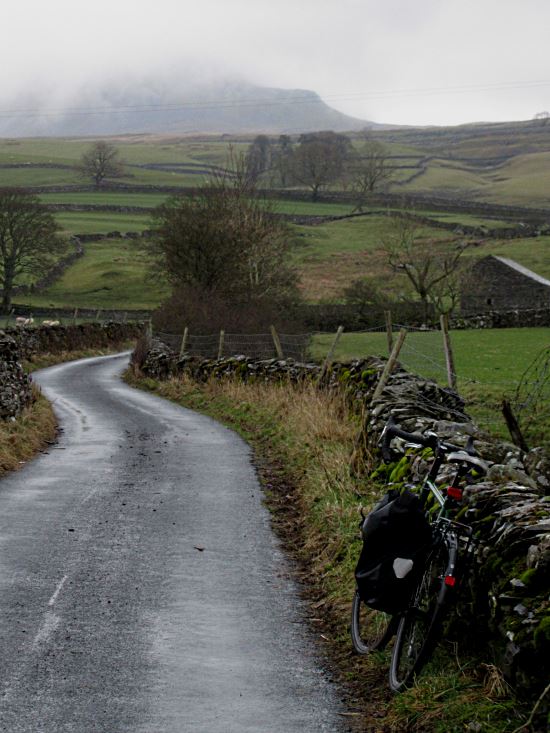 A few miles further on clockwise was Horton-in-Ribblesdale, another place descended on by hordes thanks to its place at the foot of Pen-y-ghent. Which, to judge by its name, must be the highest point in Belgium (694m/2277ft, 3hr return, pic).

The famous cafe just by here is sadly closed down since last September, much to the chagrin of walkers wanting their documents stamped, and of cycle bloggers hoping for a warming coffee. 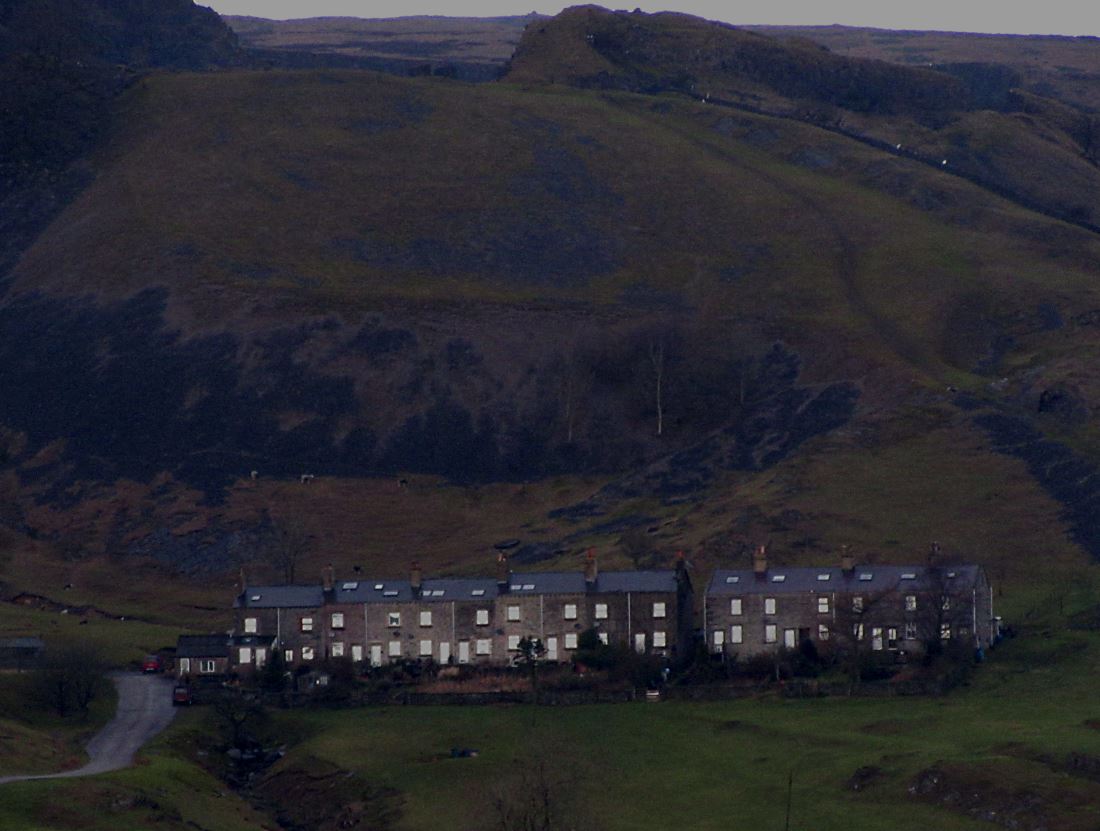 I looped back to Ingleton via a section of the Way of the Roses, the 170-mile coast-to-coast from Morecambe to Bridlington that’s said to be the UK’s second most popular bike route (the C2C being the first). I did it in April 2010 slightly before it officially opened, getting frozen stiff in Settle and sunburnt in York. This time, passing the quarry near Helwith Bridge, I saw this row of houses whose windows had a spooky glow (pic). It was like being in a 1960s sci-fi film, perhaps as one of those incidental non-speaking roles who come to a horrible end.

Anyway, I got back to Ingleton and celebrated my own Three Peaks circuit – not for charity, in a well-behaved group of 1 – with a pint. 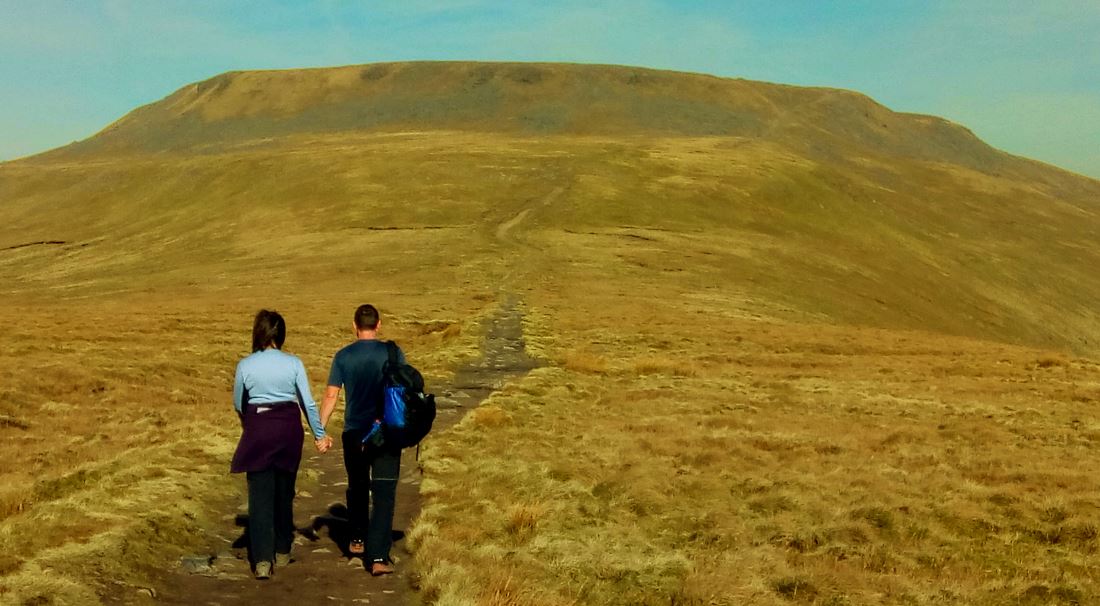 As it happened, two days later I did indeed walk up Ingleton, with my friends Si and Sue (pic). It was a gorgeous, sunny and warm April day. Which was rather worrying, as it was still February. 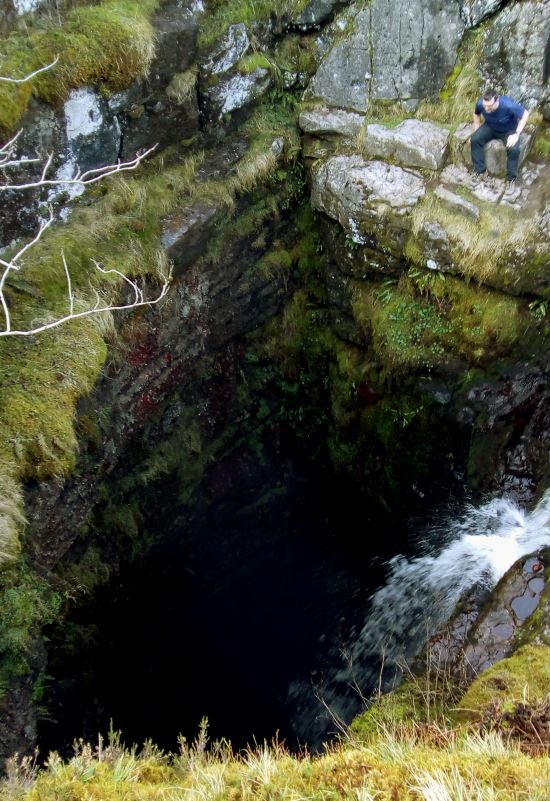 We also stopped off to admire Gaping Gill (pic), where a river plunges underground to re-emerge a mile away in Clapham village.

It’s an astounding, dangerous, apparently bottomless black hole whose appearance seems inexplicable. For some reason I was put in mind of Brexit.