A super cycling day of fine weather and finer scenery. 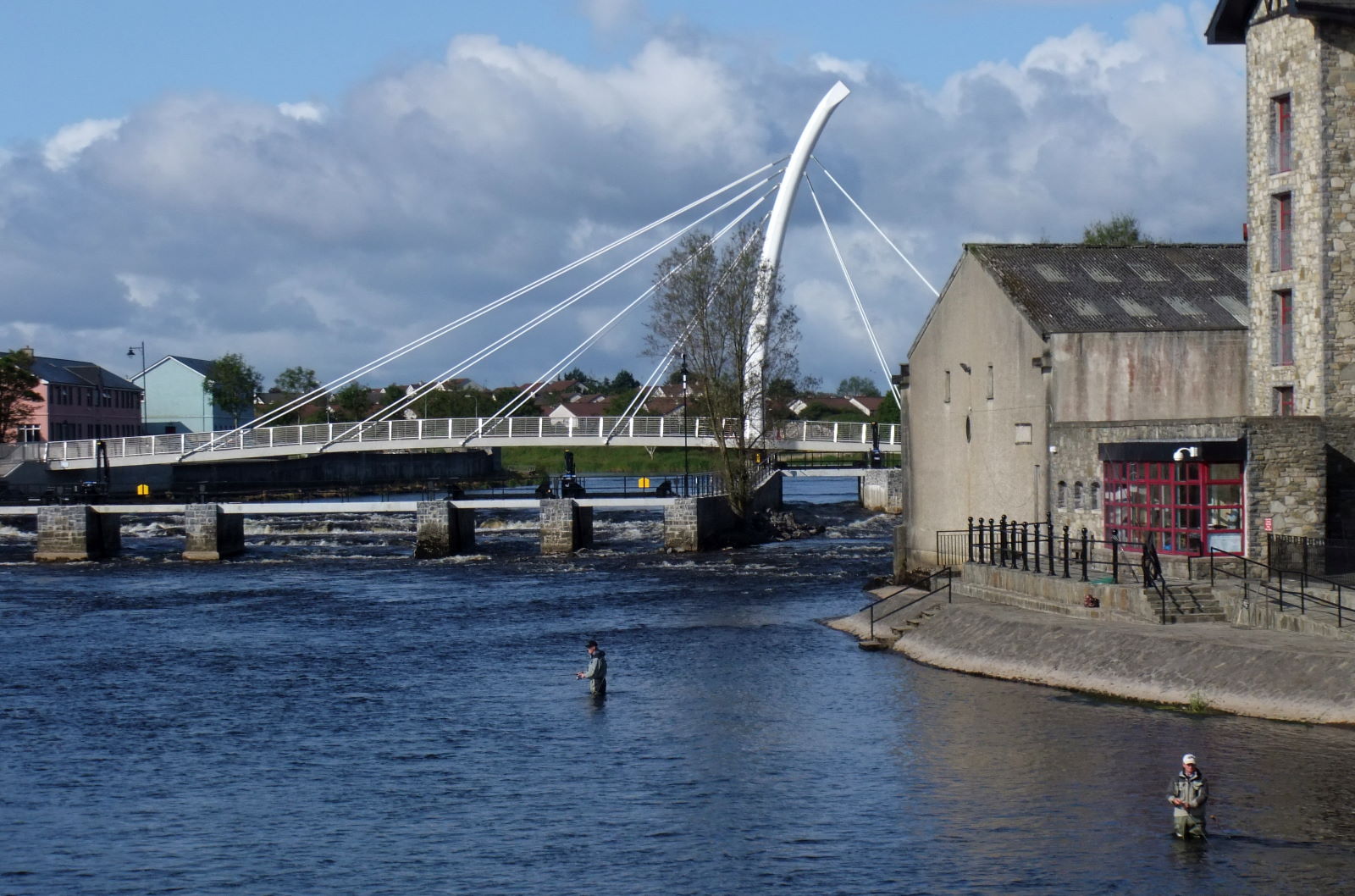 Ballina has salmon fishing right in the centre, and a few chaps this morning were wading in the clear waters angling for a fat ’un (pic). Their waist-length waders would have come in handy for me over the last few rainy days. 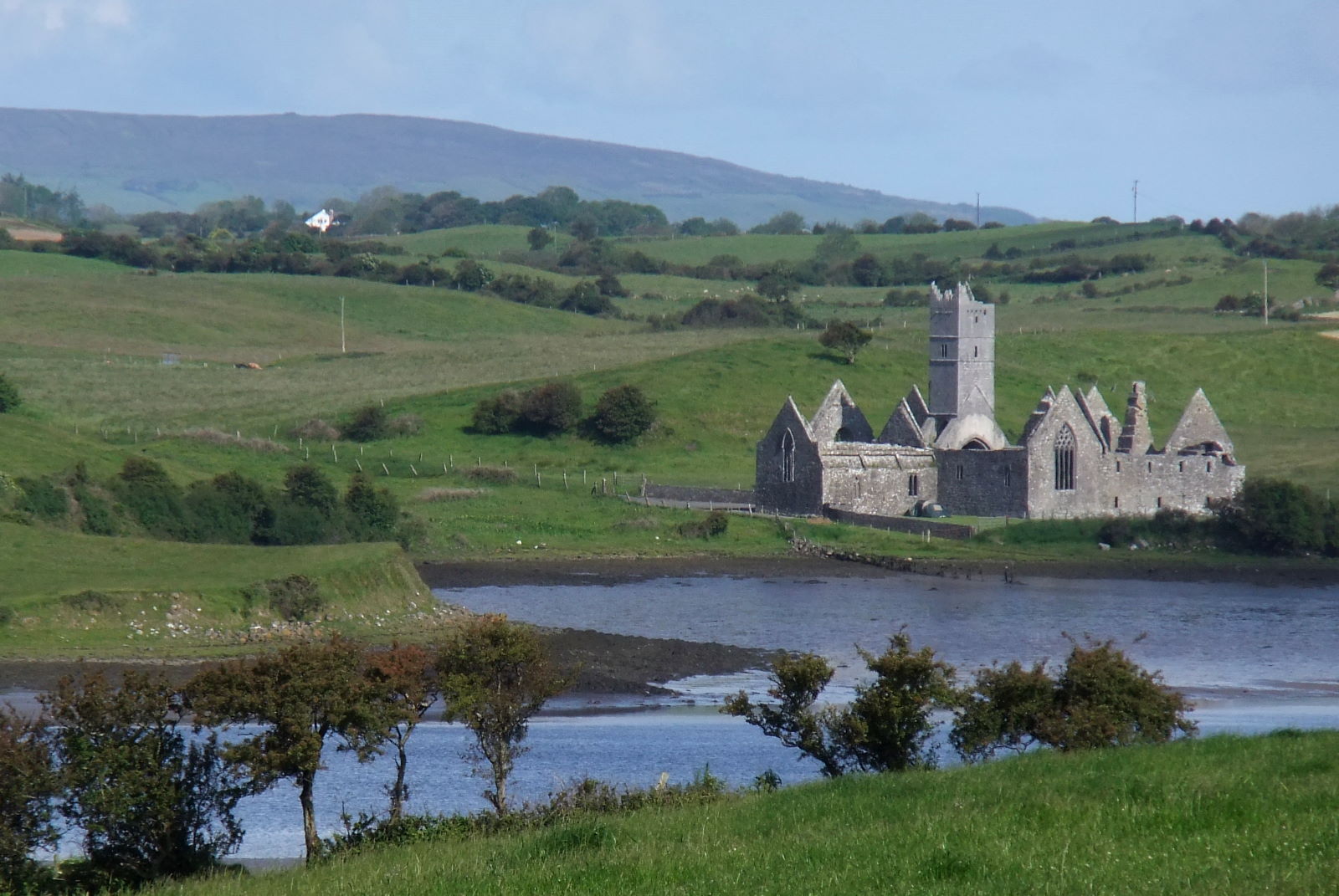 What a fab few hours’ riding! Alongside the Moy everything was lovely and green and blue and clear under the summery sky (pic). Villages, quiet lanes, coast roads, little traffic, no wind, bright and cool… I hadn’t been this happy since yesterday. 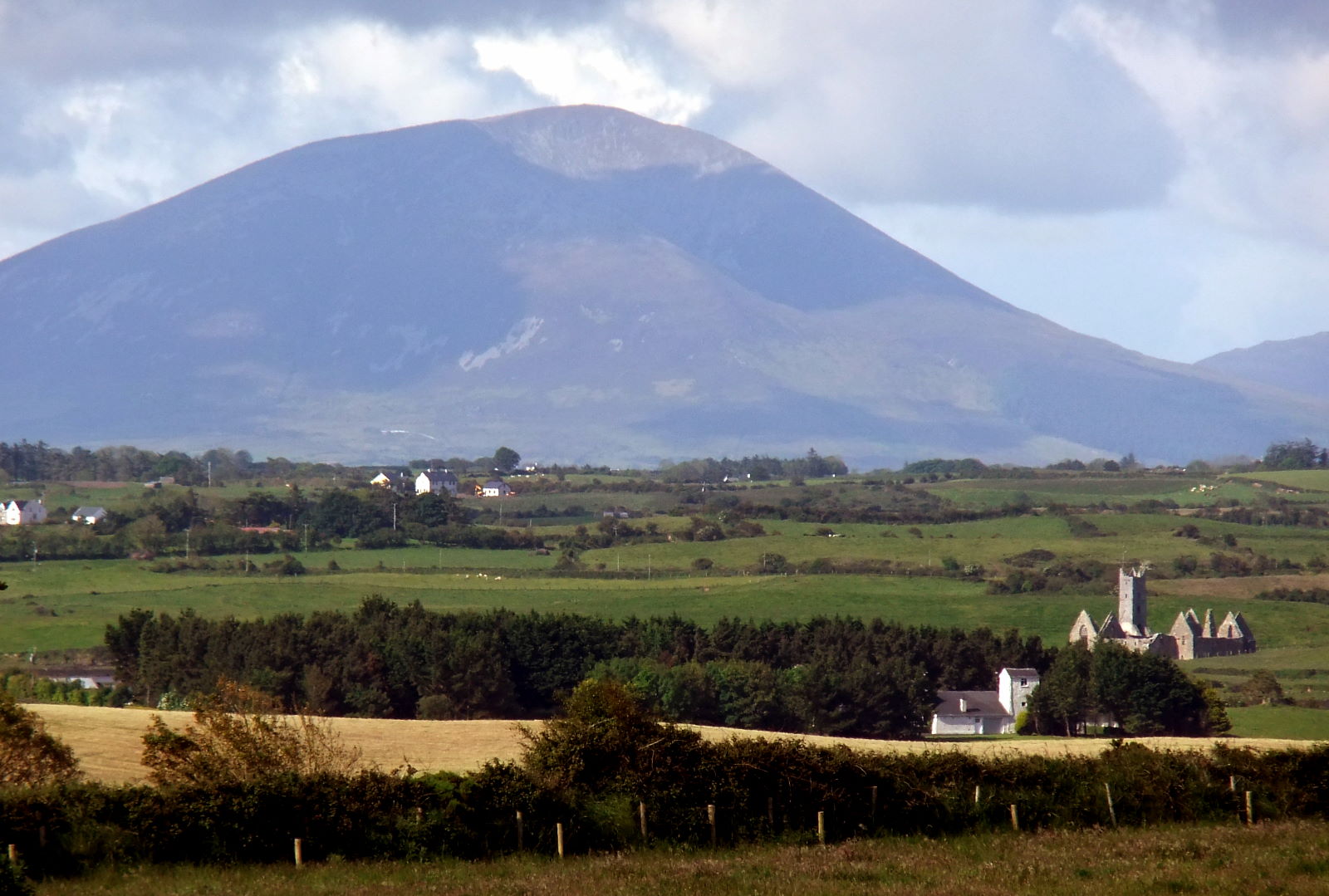 There were lovely views of the hills back in Connemara (pic) and lush estuarysides.

You can see why it’s called the Emerald Isle, despite the fact that emeralds are made of Be3Al2(SiO3)6, in other words beryl, because Beryl would be a funny name for an island. 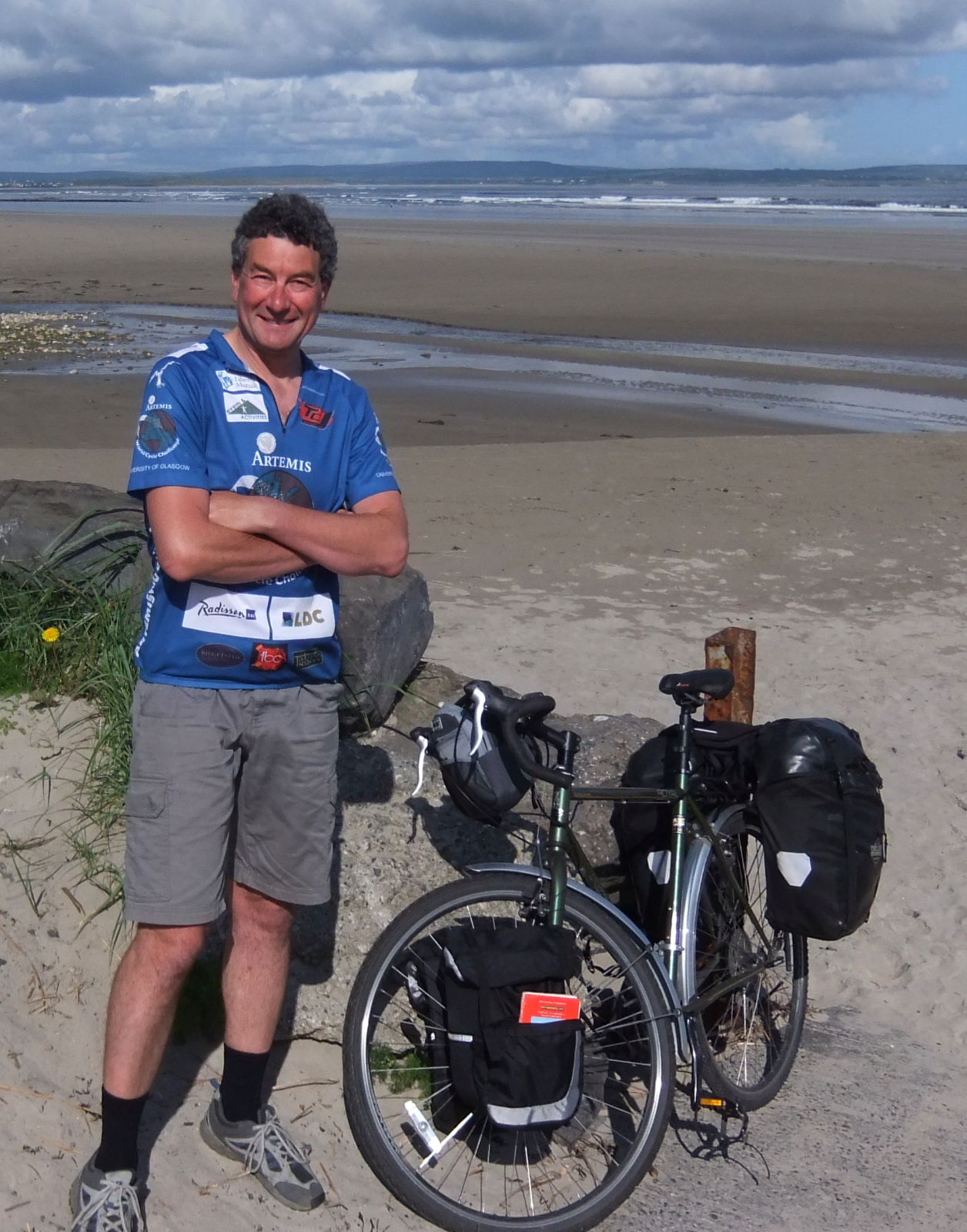 Eventually I rejoined the main road towards Sligo, snacked at a garage, and enjoyed some beachside riding (pic) – though it was too cold for a dip.

Shortly after, around Ballysadare, I found a wallet in the road. Perhaps it had slipped out of a cyclist’s pocket, perhaps, or, more menacingly, been discarded by a mugger.

They clearly belonged to a John Murphy, of Dublin. But what to do? I didn’t have a phone with me, and police stations would be closed for the weekend.

I knocked on the nearest door, and an unfazed lady took the wallet and promised to get on the case of tracking Mr Murphy asap. Should I have trusted her?

Sometimes you just have to make an assumption on the balance of probabilities that someone is honest, even if they look a bit unkempt and eccentric. So I’m glad she did.
Anyway, if you’re reading this, Mr M, I hope you got to see the rugby.

Now in Sligo, I lunched by the riverside at an old bridge. There were some nice trad shopfronts and old pubs, one of them with a bike parked in it, but Sligo felt a tad shabby, while not as rough-edged as Ballina. The waterside views away from the town were all grand, though (pic). Somewhere in the haze to the northwest were the mighty cliffs of remote, off-piste County Donegal; great to visit by bike, everyone said, but it’ll have to wait till next time…

Leaving Sligo, I passed the massive curtain of a mountain north of the town (pic) and got to Ballyshannon around six. I was curious to see the old bridge across the Shannon: because of the way Northern Ireland’s border bulges out westwards, the Republic is split into two by the river here. 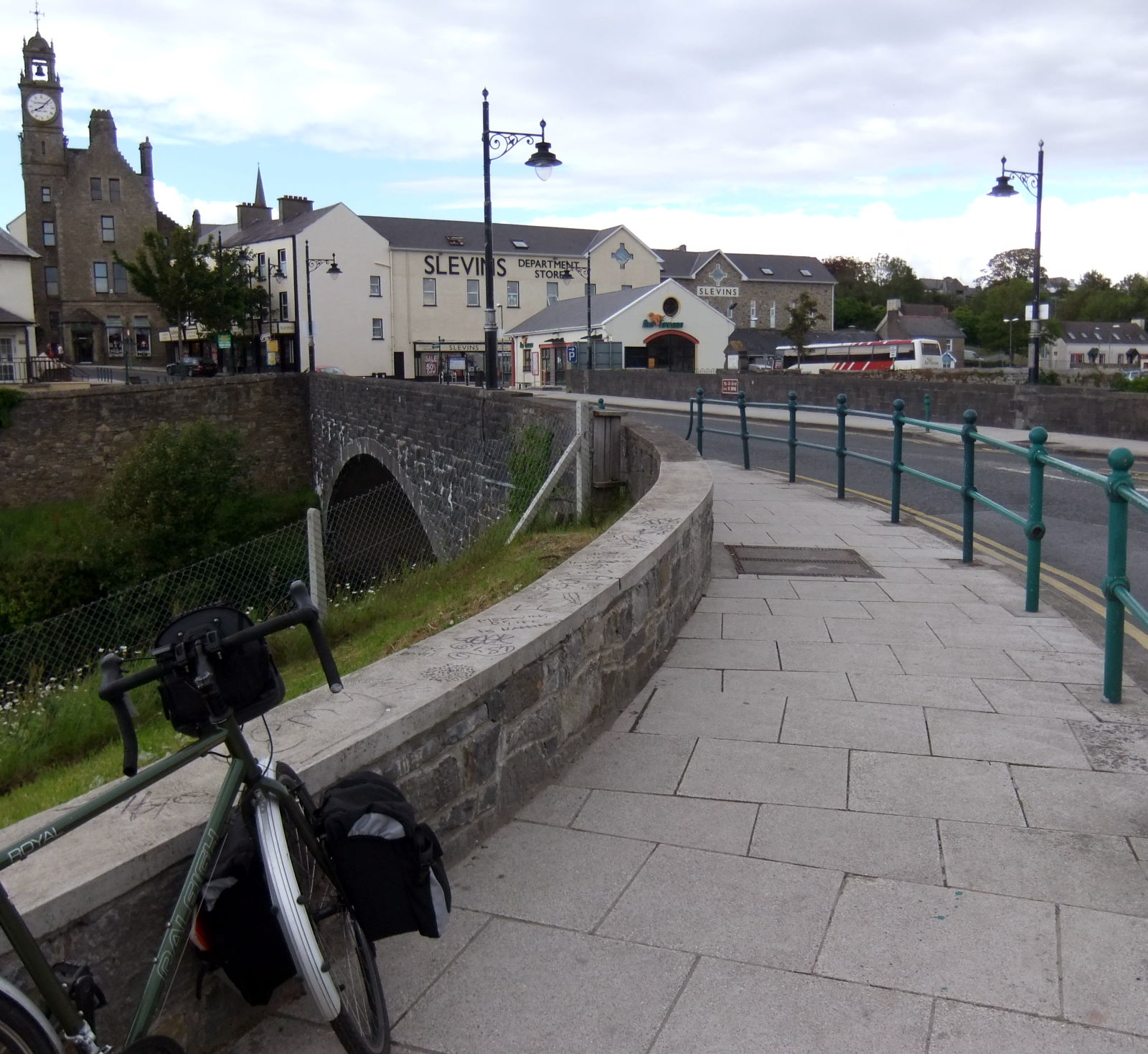 So until 2006, when a new adjacent bypass was opened, the old bridge (pic) was the only thing joining the Republic’s upper and lower halves: the country’s thorax, where Ireland was a mere eight yards wide, and a coast-to-coast walk could be done in five seconds.

My hostel, recommended in the guidebook, was a few kilometres north in the village of Cashelard. But… it was firmly shut.

So I did what you naturally do in Ireland – ask in the pub for information, purchase price one pint – and within seconds one of the amiable bar-proppers had phoned for the caretaker, who duly turned up with the keys a Guinness or two later.

Evidently I crossed some sort of linguistic boundary back in the town. To my ears we were now on a Northern Irish isogloss, and I had to recalibrate my ears slightly to the new colours of the accent.

To my deep joy I found I had the centre to myself tonight. A nice new kitchen with complimentary tea and coffee. A whole dorm just for me with enough fresh towels to reserve sunbed spaces for a small German town. My bike safely inside, in the lobby downstairs. The TV room to myself, with a Premier League hurling match.