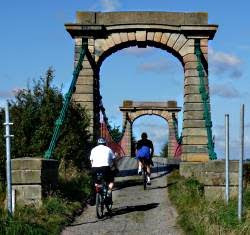 Not far from the Humber Bridge is another crossing that’s a little-known gem, and one that’s effectively only open to pedestrians and cyclists. (Cars can in theory use it, except there’s no road on the other side, only a dirt track.)

Horkstow Bridge (pics), just 20 minutes’ bike ride south into Lincolnshire from the Humber Bridge, is one of Britain’s oldest surviving suspension bridges, dating from 1836. It’s also John Rennie’s only suspension bridge, and presumably the world’s most elegant bridge built solely to transport bricks across a canal. Men of punier aesthetic ambitions than Rennie would have just thrown them over. 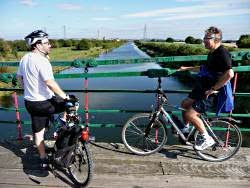 Much of Horkstow Bridge’s charm is because it’s on the end of a remote country lane in a back-of-the-sofa part of England, on the end of a cul-de-sac. Which is an odd place for a bridge. A kind of pocket-sized Clifton Suspension Bridge, it’s only 133 feet long, 14 feet wide and 36 feet above the river, so the Humber does rather dwarf it.

But, like the Humber, you can ride right across it, so what more reason do we need?