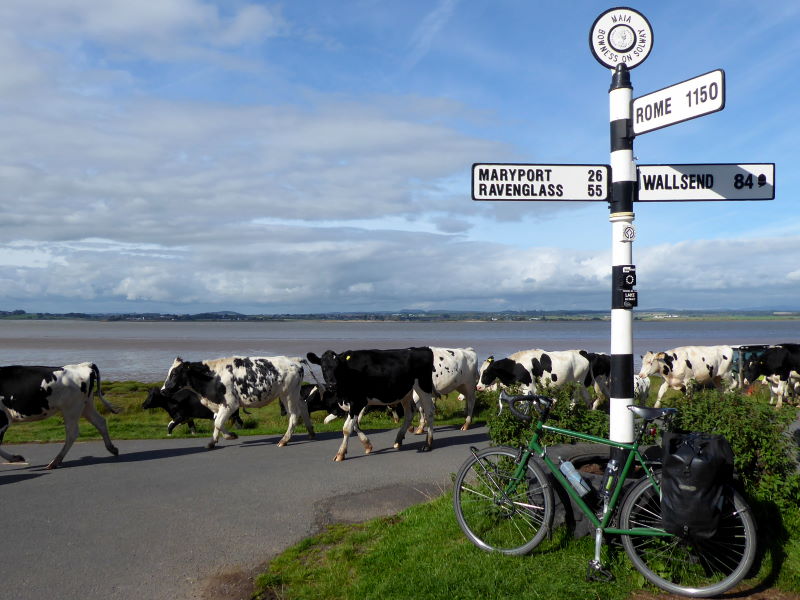 I’m on a diet. A Roman-era diet. I’m following Hadrian’s Wall, eating and drinking only things that the construction-loving Emperor himself would have recognised.

In short, this means no potatoes, tomatoes, chilli, avocado, pasta or other Age-of-Exploration stuff; but plenty of meat, fish and shellfish, crunchy salads, chunky stews, old-fashioned herbs, olives and fruit. And, of course, no tea, coffee or hot chocolate – but plenty of healthy, hydrating posca, the Roman soldiers’ on-the-go energy drink, consisting of two-thirds water and one-third wine.

It also means cycling along the course of Hadrian’s Wall itself. There’s not much left now of the barrier which separated the pesky Scots from the northern limit of the Roman Empire from about 122 till the Romans packed up and left around 410. It stretched from Bowness, west of Carlisle, about 80 miles to Wallsend in Newcastle, but only a few miles of stubbly remains, and some lumpy earthworks, are visible now.

This first day was only a half-day, as the morning was taken up getting to Carlisle, my garrison for the next two nights. I cycled west out of the city, past the grand castle. Botchergate at chucking-out time on a Saturday night may be one thing, but the castle facade on a sunny equinox afternoon is another.

Once as far as Anthorn, the views begin to thrill. You can see the northern Lakes peaks, the hills of Galloway, and the Scottish coast across the Solway Firth. There’s also a rather impressive thicket of government and military transmitter masts, which broadcast messages to submarines.

Having traced a clockwise route round the peninsula I eventually got to Bowness-on-Solway, where Hadrian’s Wall officially began. There’s nothing barrierlike to see any more – it was recycled as building stones long ago, most notably for Burgh’s church, and anyway most of it was turf mounds out here. But there’s a grand signpost, indicating how far away Rome is (1150 miles). From here, however, all roads lead to Carlisle.

I snacked on authentic Roman-style cheese (not cow’s milk: strictly goat’s or sheep’s, and hard, not soft – with flatbread, and dipped in olive oil, delicious). On this gloriously sunny afternoon I could have lazed till the cows come home. Which is what happened. The cows wandered out on to the beach, perhaps desperate for a post-lockdown holiday, and had to be rounded up by the farmer in her tractor. Wow: you have to know what you’re doing to dodge the estuary quicksand on a farm vehicle.

Shortly after the start of my trans-Wall trip I bumped into someone finishing theirs. Jacqueline Greig had done it in Roman costume, for charity. I don’t blame her at all for preferring walking boots over sandals.

The road back to Carlisle is Roman-straight for miles, and the westerly blew me back comfortably to Carlisle, and my guesthouse. Dinner was an authentic hotpot: a hearty stew of bacon, cabbage, leek, beans and trad herbs (lovage, thyme etc) which I’d prepared earlier.

I washed it down with some red wine, purely for authenticity’s sake, and desserted on grapes, for which more wine seemed the obvious accompaniment.