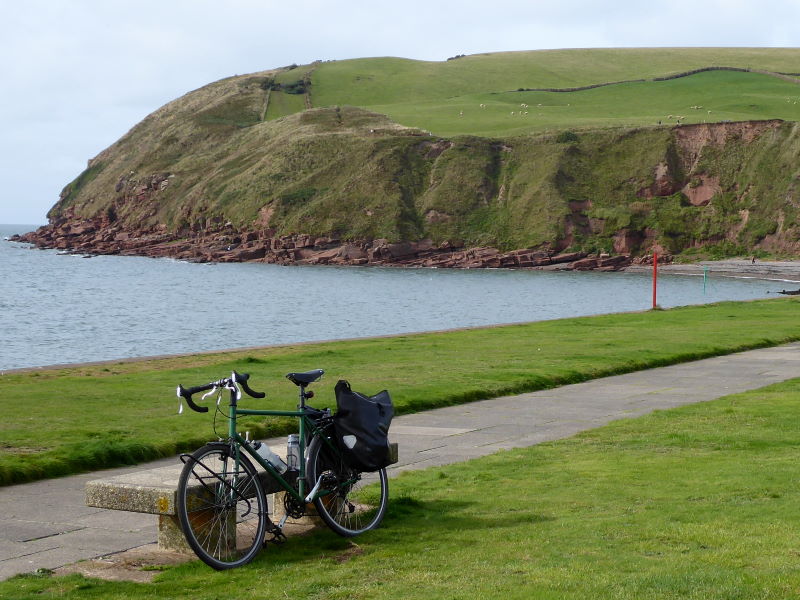 Hadrian’s Cycleway closely follows the very trails that the great Emperor himself never took during his visits to Britain. Hadrian was quite a character: cultured but ruthless, he consolidated the Empire with a largely peaceful tenure.

He was also Spanish, adopted, gay, and bearded, which clearly some purists didn’t like – Roman Emperors had never had a beard before, after all.

Anyway, today I got the slooooooow train from Carlisle down to Ravenglass, and the start of Hadrian’s Cycleway. It heads up along the west coast from here round to Bowness; thence to Carlisle (the bit I did yesterday); and then on along the course of the Wall, or actually avoiding it most of the time, to Newcastle.

Ravenglass is the site of one of the most complete Roman-era structures in Britain, the bath house from the old fort. I had it myself this crisp autumn morning. Roman baths were salubrious places, where users could enjoy a range of spa treatments, hobnob over food and drink, and perhaps even admire public art. Or, perhaps more often, admire local women.

With their copious hot water, squeaky-clean sanitation, excellent plumbing and top-quality artworks, they put me in mind of my guesthouse room, which had none of those.

Stopping to admire the ford at Ravenglass – and take the footbridge alternative instead – I headed up Hadrian’s. The first few miles are a real mix of surfaces: there’s soft sand, clonky concrete, lopsided flags, harsh dirt tracks and rumbly plastic lattice. But then Hadrian’s settles down, and it’s good (and mostly flat) surfaces, the majority smooth asphalt railtrail.

The route takes you past Sellafield, which like all practised con artists keeps changing its name (Calder Hall, Windscale etc). I know some people carp about nuclear power, but I hear lots of glowing reports.

(For ‘aromatic’ read ‘smelly and putrid’. Garum, as their fish sauce was called, was made from fermented innards of swimmy things. The nearest you get to it now is South East Asian fish sauces such as Thai nam pla. I find it very tasty.)

North of Whitehaven, after a tricky road climb and ascent through a park, it’s good flat railtrail virtually all the way to Maryport. There’s a particularly romantic stretch coming in to Workington, where overhanging branches form a cosy tunnel. In Workington centre was the less romantic closure of the path through a tunnel with no alternative route signed, and I swearily had to hump my bike down some steps as a workaround.

I’d had quite enough excitement, and fish sauce, for one day. So I got the train from Maryport back to Carlisle and my guesthouse, where more hearty stew, red wine, and sub-Roman plumbing awaited.