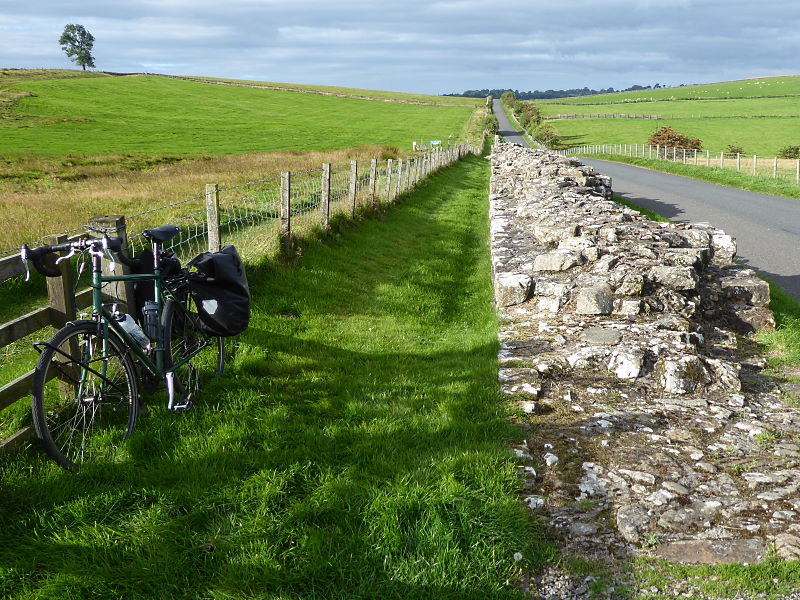 Today was a breeze. Literally. A huge tailwind westerly propelled me at speed along the Wall as if on an e-bike. I set out from my Carlisle guesthouse at first light, following paths through a park and past the town’s very own Leaning Tower.

I somehow ended up following the walker’s path rather than the cyclist’s version of Hadrian’s – I’m blaming the signage, which clearly isn’t idiot-proof – but after clattering over some bumpy riverside paths and across fields, I found the thread again.

Hadrian’s Cycleway makes some curious detours, most notably the one south of Low Crosby, through Warwick Bridge, which is nowhere near the Wall.

At first glance this offers no obvious benefits, and seems a routefinder’s caprice. Were they tracing an outline of the Mona Lisa on GPS? Did they want to drop in on a cousin they hadn’t seen for a while? Did their arm get jogged and the mapping software accidentally snap to an unintended farmland tour at random?

The answer is, of course, to actually cycle it. And then you find the truth.

Still, I did go through a village called How, which amused me. They ought to apply to have a question mark after their name, just like Westward Ho! has done with an exclamation. Some day I must do a Grand Interrogative Ride, visiting Hooe and Wye (Kent), Ware (Herts), Wych (Dorset), and How (Cumbria). I don’t know if Watt Wood (Yorks) and St Wenn (Cornwall) count.

After briefly stopping off at Lanercost – half Priory, half bargain food warehouse – I climbed up to the ridge at Banks, where there’s the first bit of actual Wall: the remains of a tower. There’s more masonry action further along, on the Roman-straight bit of road that goes past Birdoswald fort and museum: here there’s some longish stretches of surviving bricks and mortar.

I dropped in to the Roman Army Museum at Greenheads, which I heartily recommend. There’s some very well-made, cinematic films to see (including a startlingly perspectived 3D one) that genuinely do bring alive what a soldier’s life was like on the Wall, and plenty of lively and absorbing displays and exhibits.

I was intrigued to learn that the soldiers on the Wall were auxiliaries – non-Roman citizens, either conscripts or semi-reluctant signers-up – from far afield: Belgium, Spain, Syria. Auxiliaries didn’t serve in their native countries, for fear they might mutiny alongside the locals. After 25 years’ service they were given a plot of land, a pension and – most attractively – Roman citizenship for them and their children (but not their wife). And here on the Wall, even more attractively, soldiers enjoyed regular easy access to local food and Celtic beer.

So, I felt justified in doing the same. At Twice Brewed Inn, next to Once Brewed, I had a pint of Sycamore Gap, Twice Brewed Brewery’s brew celebrating nearby Sycamore Gap, where a sycamore occupies a gap. It was a beautifully kept, refreshing pale ale, and – I must admit – rather tastier than the posca I’d been hydrating with so far. Posca is two-thirds water and one-third vinegar, disguised with herbs and honey, and tastes as good as it sounds. Horrible, in other words.

(Another version of posca substitutes wine for the vinegar, but hydrating all day in this way seemed a little unwise.)

I dropped in to Vindolanda, a mightily impressive museum with extensive remains of the Roman fort here and another excellent museum. It’s run by the same trust which administers the Roman Army Museum, and the similarities are plain to see, such as the terrible and inadequate cycle parking both have.

Vindolanda boasts a replica of Hadrian’s Wall you can explore, and it gives splendid views over the rugged surrounding countryside. You can see for miles, which isn’t far enough to see any adequate cycle parking.

Just outside Vindolanda, on Stanegate – the old Roman main road – is a unique Roman milestone in situ. The inscription – with a dedication to Hadrian, perhaps with an eye on his visit here – has long since faded completely, but a replica inside Vindolanda shows it all.

The inscription ends with A CORIS M[ILLE] P[ASSVVM] XX (20 miles to Corbridge). Some scholars believe there may also have been some text below saying NON HIC VEH[ENTEM] RAE[DAM] [EST], which means ‘There is no bicycle parking here’.

From here the tailwind whooshed me along Stanegate, exhilarated, to Hexham and beyond. (I rode the stretch after Hexham at leisure earlier this year.)

I eventually arrived in Newcastle, enjoying the grand line-up of bridges in the evening sun.

For the last four miles of the Wall, to Wallsend, the Cycleway runs along a smooth railtrail (well, smooth apart from some irritating tree roots) to the museum of Segedunum, on an old Roman fort. Excitingly, in 2014, the remains of an old Roman Bath House were rediscovered just to the south of it.

More excitingly, with my trip done, I no longer had to deny myself the food and drink I had missed over the last three days. Tea, coffee, hot chocolate. Breakfast cereal. Porridge oats. Fish and chips. Pasta. Pizzas. Curry. Beer with hops.

Almost all of which, I was pleased to see, are available in Wetherspoon’s on the quayside, not far from the train station and my trip back home…