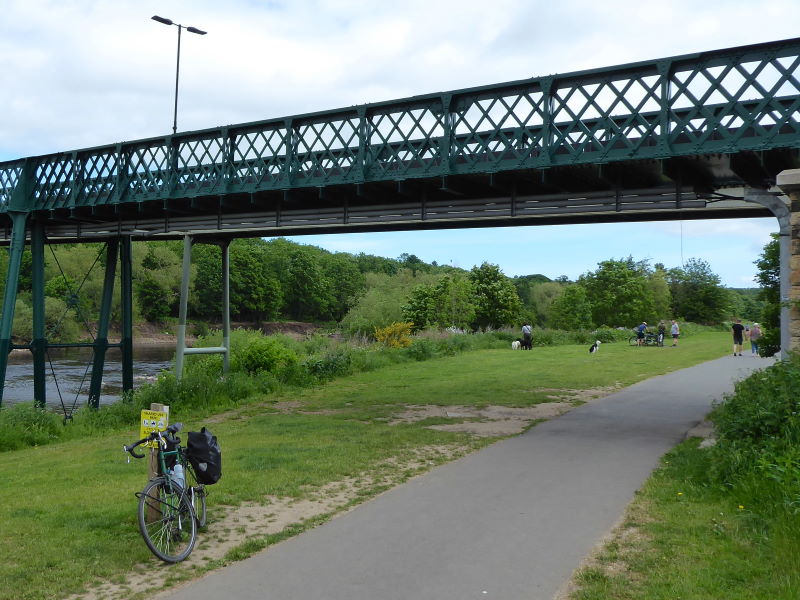 It was all go with the flow today, following the Tyne downriver to Newcastle mainly along the fine NCN72, with a friendly tailwind.

I investigated a few back lanes north and east of Hexham, ending up ruling more out than in for my routes article, but did enjoy some excellent ridgetop views, quiet roads, and bijou little castles such as Halton and Aydon (said to be England’s finest intact 13th-century castle/manor house).

Northumberland is often tagged as castle country on the basis of mighty structures such as Warkworth, Alnwick or Bamburgh – there’s even a Coasts and Castles Sustrans cycle route – but there are lots of small-scale ones too.

From Ovingham, though, I followed the Hadrian’s Wall cycle route along the Tyne back to Newcastle, and a rather fine route it is too – well-surfaced (almost all good tarmac, much of it smooth and new) and with north (NCN72) or south (NCN141) bank options from Ryton. (Sadly, the route south of the river between Wylam and Ryton is closed due to landslip, with no prospect of reopening.)

Newcastle says ‘bridges’ to me, probably in a welcoming Geordie accent, but it’s not only the centre where you have some impressively photographable crossings. At Ovingham there’s a curious double-bridge of narrow ways, one for cars not bikes, the other for pedestrians not bikes – hmm, something seems to be missing there – and at Wylam there’s Hagg Bank Bridge, an invitingly girdery old tramway crossing.

Anyway, I was happy to dawdle my way along the south bank option back into Newcastle, with views of yet more bridges, one of which – the low-level swing bridge – I used to get from Gateshead over the river to the Toon itself.

It had been a splendid little trip, with everything you could reasonably wish for on a bike jaunt: superlative scenery, ancient monuments, friendly people, characterful towns, quiet lanes and decent weather.

Except perhaps easy access to real ale in Hexham. Maybe it wasn’t reasonable to hope for that.

e2e.bike > Other > Route research > Hexham 4: Along the Tyne to the Toon