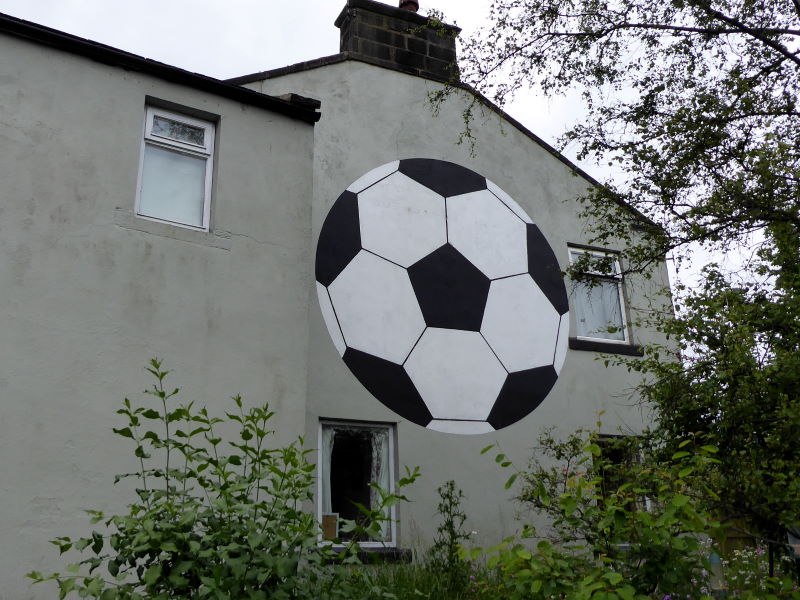 A place called Football. With the 2020 Euros currently taking place right now in, er, June 2021, I couldn’t resist cycling it.

Football is a terraced street in Yeadon, on Leeds’s western outskirts. If you’ve ever flown in to Leeds Bradford Intergalactic Airport, you might have glimpsed it during your white-knuckle descent sideways against the queasy crosswinds. No plane for me of course: I cycled up from Horsforth train station, a couple of miles of uphill slog.

And yes, it’s ‘Football’. Not ‘Football Terrace’ or ‘Football Street’: just plain ‘Football’. For the hundred-odd residents of this rugged cul-de-sac, Football may not be coming home in the Euros, but at least they’re always coming home to Football.

(That map also shows a long-gone ‘Theatre Royal’ on the junction of Football and King St, where aspiring Cristiano Ronaldos or Neymars could polish their acting skills.)

It’s not clear where the titular pitch was – historically, this is an area of quarries, whose workers were presumably the target market for those terrace homes. But the western end of Football, accessible only on foot or by bike, greets you with a large Adidas-pattern football mural on the gable end of the first house. It’s repainted every year by a local decorator.

From the ridgetop position here there are glimpses of Airedale to the west, and closer by, Morrison’s.

Several of Football’s residents happily embrace their street’s curious name. Number 3 is called ‘Left Back’. Number 10 is ‘One-Nil’; number 70 tops that with ‘Seven-Nil’. There’s an Offside, and a Hat Trick. Unfortunately the street isn’t long enough for a Number 110 (which could be ‘110 Per Cent’) never mind a 442 (‘Four Four Two Football’ has a nice ring to it).

And – it’s reported – the ice-cream van plays the Match of the Day theme tune. Not much chance of that today: despite being midsummer’s day, it was chilly, blustery and bleak.

Oh, hang on, I spoke too soon. Just up Windmill Lane from Football is Yeadon Tarn, a rather delightful natural lake with a paved path of a kilometre or so around it. (I couldn’t see any signs saying No Cycling, so I did.) And sure enough, there was an ice-cream van, not playing any football-related jingles though.

This is clearly a place of sporting and outdoors endeavour: someone was enjoying a sailing tryout on the lake, a pair of mobility-scooter users were doing a ‘100 Laps of Yeadon Tarn’ for charity, there’s a golf course to the east, and just down the road is a place called Cricketer’s Green.

I didn’t actually see anyone playing football in Football. There was plenty of evidence of one of Britain’s other favourite pastimes though, pavement parking.

This part of Yorkshire is pretty good for sport-related place names. A few miles north of Football is Pool, and a short ride south of it is Bowling. One day I’ll do a multi-activity trip that consists of playing football in Football, pool in Pool, and going bowling in Bowling. And possibly finishing in Booze.

Anyway, my own final outdoors endeavour consisted of sitting outside Murgatroyd’s to scoff a rather tasty haddock and chips, before scooting back to Horsforth station, all downhill, past that golf course. Which is how I best enjoy golf: freewheeling rapidly past it.

So, for all those people who say I Don’t Like Football, I challenge you. How do you know until you’ve been?

I’m not saying I’d necessarily want to live there, but you know, I rather like Football.