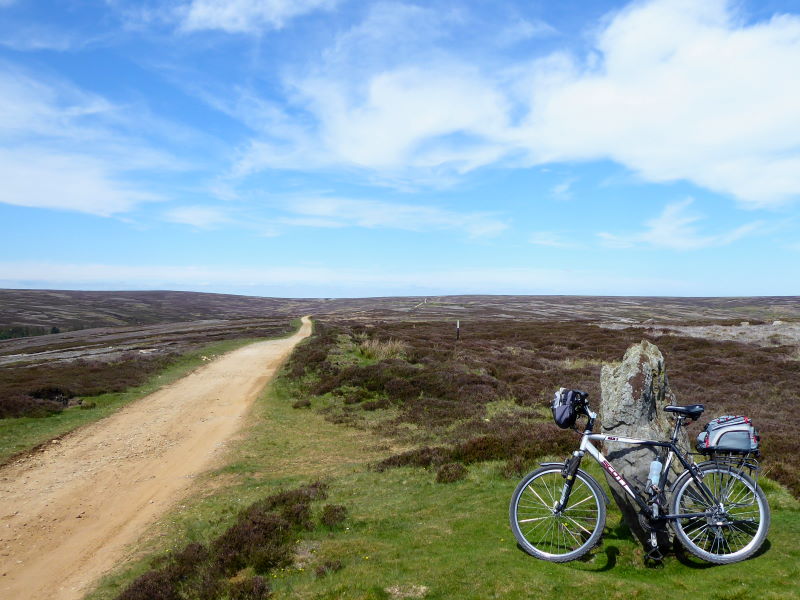 Day 2 of my Bridges End to End featured awesome Moors landscapes all to myself, and the bizarre Meccano-monster bridge at the top of Yorkshire.

I resumed from Malton where I finished Day 1, and conscious of its ‘food town’ image, stocked up with a sausage roll and pork pie from Thomas the Baker in the centre.

A recently improved cycle route runs along chalky tracks north-east out of the centre and, after some pleasantly quiet flat lanes and a steady climb up the southern edge of the Moors, I pitched up at one of my favourite villages.

Hutton-le-Hole – the ‘hole’ is the hollow the village sits in – is a gorgeous-looking little place, its cottages and traditional buildings scattered round a rather rambling green. Sheep wander round uncertainly, staring at you, bleating, and chewing constantly, which makes them look rather dim. As do day-trippers from [insert your least favourite town here].

No, of course, H-le-H was a delightful place to be this glorious morning, and the visitors were all as polite, friendly and sure of their bearings as me. Apparently the thirty listed structures include a K6 phone box and an 1833 sundial, but I was more interested in finding a cafe. I re-energised with a coffee and slab of artisan chocolate from round the corner – I believe in supporting local businesses – and carried on up north out of the village.

I saw this tribute cut into the hillside just north of H-le-H. I expect they didn’t have the patience to say ‘Vote anyone but Tory to protect socialised healthcare from the rapacious neoliberal greed of corrupt, self-serving cronyist privateers of global capitalism’. I hope nobody injured themselves doing it, anyway. That would be a bit self-defeating.

A side lane down to Low Mill gave me stupendous views of Farndale. On days like this I feel there’s nowhere in the world I’d rather be, except perhaps a bit further up the same road.

To get up to the moortop’s north-south offroad highway, Rudland Rigg, I pushed up a steep chalk track that was about as smooth as a relief map of the Moors. Perhaps somewhere in the map was a scale model of this very track, containing its own scale model, etc.

And at the top, an hour or two of bliss. Sunny weather, a good dry track that my trekking bike could just about cope with comfortably, awesome views of purple heather and distant green valleys, and the whole of this to myself. Not another soul was out on Rudland Rigg this lunchtime.

I lunched on my pork pie and a banana to the sound of curlews and the breeze. My two-quid plastic bottle of Hutton-le-Hole tap water tasted as good as nicely chilled Sauvignon Blanc. Not quite New Zealand Sauv Blanc, maybe: South African, perhaps. Not bad though.

North of Bloworth Crossing, something a bit spectacular happens. Suddenly, on the left, you see the Moors fall dramatically away to reveal the flatlands of Middlesbrough, as far as the eye can see, perhaps even your eyes, which will be a lot better than mine. The track continues, marked as the Cleveland Way. Sticking up from a distant moortop you can see the memorial to James Cook, the local boy who according to the old cricketing joke is the only English captain to have toured Australia and never lost a match.

The Cleveland Way becomes a newly-asphalted lane that ski-slopes down the edge of the Moors to Kildale: an outstandingly enjoyable downhill, the reward for that pushing upwards earlier on, and it’s good to know that it’s all flat from here.

Great Ayton was pleasant in the sun, with families paddling in the stream through town, and an adequate cycle path alongside the A172 scooted me effortlessly through Middlesbrough’s outskirts. One little stretch was reminiscent of those abandoned 1930s cycleways that Carlton Reid has been rediscovering.

I’ve had several good visits to Middlesbrough, though it can feel edgy, and there was an edge today. Menacing youths on bikes; swaggering motorists cutting you up to park on double yellows and open doors in your path; druggy-faced people arguing furiously and swearily on their mobile phones while walking down the street.

There are a awful lot of tattoos, too. (Rearrange those words to make grammatical sense.)

But I pedalled past all that, through the centre and past landmarks such as the County Court, and made it to my endpoint, one of Britain’s most remarkable river crossings.

The Tees Transporter Bridge – one of only a handful of survivors of its type in the world – opened in 1911. A weird hybrid of ferry and bridge, it shuttles a platform suspended from spidery girders across the waters every few minutes. At least, it usually does: it was currently closed for repairs, making it all rather peaceful. (I have ridden it in the past: I blogged about it in one of my first Yorkshire Ridings posts, and they’ve clearly refurbed the shuttle platform since then.)

The best view of the structure is from the viewpoint close by, and this – overlooking the quiet Tees – was the finish of my little Yorkshire End to End. I chatted briefly to a chap who’d come from Whitby to see it on a steam train, and he chatted rather less briefly back. Time for my train home…

It’s been a fabulous little two-day trip, from bottom to top of my county, with some quite wonderful Wolds and Moors scenery en route. And a neat complement to my other recent bottom-to-top trip (from Abbeydale to Zebra Hill): that one west side, this one east side. Gritty towns, beautiful villages, remote wildernesses, friendly folks, and splendid scenery everywhere.

By gum, Yorkshire’s a grand county to explore by bike.

e2e.bike > Yorkshire Ridings > Yorks A to Z > Yorks B to B 2: Malton to Middlesbrough Transporter Bridge