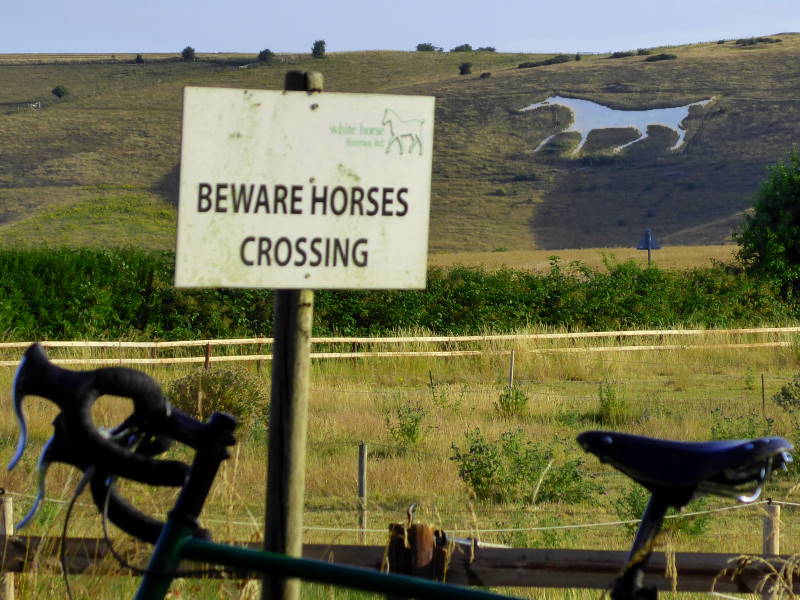 Stonehenge. Avebury. Long barrows. Crop circles… and White Horses. There’s something weird about Wiltshire. Must be those open plains and smooth chalk slopes: a blank canvas to send messages to the gods, or them to us.

Britain has many hill figures in the shape of a giant steed round the country. There’s one in Folkestone near the Channel Tunnel entrance, for instance; an ancient one at Uffington, Oxfordshire, that looks like Picasso drew it; and one in the North York Moors, which I rode to recently.

But over half of them, eight in all, are in Wiltshire. Even the most bonkers conspiracy theorist couldn’t read much into its White Horses, though. The WWHs were all carved out the turf in the last 300 years by people with trowels rather than aliens with laser beams.

And today I rode the lot, for an upcoming magazine article: a lovely 70-mile trip from Pewsey to Westbury on a baking hot day. And I was so inspired, I wrote a three-movement suite for solo guitar to celebrate (you can hear it below).

6.30am Pewsey’s horse, cut in 1937 to replace an earlier lost one, is the smallest of Wiltshire’s eight canonical nags: 20m by 14m, roughly tennis-court size, though it’d be too sloping to play tennis on sensibly. Getting there, like most of the WWHs, involves a long steady 100m-plus climb from the plains up the hillside via a narrow lane.

Like most of the WWHs, the horse qua horse is best seen from below. At the figure itself you can’t tell what shape this irregular patch of chalk is – the heads tend to look more like a rabbit – but you have terrific sweeping views over the vale below and of the gentle hillsides around.

I locked my bike to the fence – needlessly; there was nobody around this early – and walked a couple of dozen metres down the footpath to the figure.

Then it was a hurtle back downhill through Pewsey, past the statue of King Alfred dreaming about Anglo-Saxon unification while the cakes go up in smoke, and then pleasant lanes fringed by crop fields awaiting alien draughtsmanship to…

7am A popular, revered and well-tended hoss since its first appearance in 1812, Alton Barnes’s WWH has been the focus of various installations and festive decorations, including cosplay as a zebra a couple of times.

You can’t get very close on a bike. There’s a car park a kilometre or two away; access is by footpath. I was happy enough just to enjoy the view of the horse from below, with real horses grazing at their farm in the foreground, more interested in chomping grass and neighing than appreciating public art. Philistines.

Next, a glorious ride up and over the ridge, and east along the valley to…

7.30am The only WWH to be mentioned in a school song and only one overlooking a sports ground, Marlborough’s equine was made in 1804 by pupils of a Marlborough college, though not the spiffy present-day Marlborough College, whose song mentions it. (‘Ah, then we’ll cry, thank God, my lads, the Kennett’s running still, / And see, the old White Horse still pads up there on Granham Hill.’)

It’s the least geographically dramatic of the WWHs, and hardest to find. Seeing it involves cycling along a bridleway just south of the town centre; you can’t get close up.

It was too early on this Sunday morning for any cafes to be open, but fortunately a car boot sale on the common above the town was setting up, and Marlborough Lions’ food van there offered sizzling hot bacon rolls and ice-cold Cokes. More gorgeous, quiet back lanes threaded through gentle horsey hill country. I crossed the Ridgeway, Britain’s oldest road and still a wonderful offroad cycle ride, and just over the brow of the hill, with fantastic views from the top to the west is…

9am A square-format hack that dates from 1838, though its precise origins are hazy. The Hackpen horse is unfenced and a short plod down the hill from the Ridgeway car park, and no WWH has better views: it seems like all of the west of England is laid out beneath you, and on a clear day it’s said you can see up to twenty industrial estates around Swindon.

It was a beautiful morning, and I was very happy.

Whoosh! Down the slope, heading west now, to…

10am A characterful little horsey, variously described as ‘animated’, and confusingly, both ‘obscure’ and ‘conspicuous’. Cut probably in 1864 by the farmer on whose land it sits, Broad Town’s gee-gee has a villagey feel, and serves as the mascot of the primary school. NB Broad Town is neither broad nor a town.

There are informal paths up to the horse itself, but the nearest you can get on a public right of way is the track up to the farm. The best view is really from the school.

From now the horses are longer distances apart. I was glad of my early start. A long flat trundle around mazy lanes took me eventually to Compton Bassett (where the White Horse pub, whose sign depicts the next horse, was closed, which was probably just as well or I’d have been tempted to stop for refreshment on this sweltering day). Not far from there was the village of Cherhill and…

11.30am Dramatically set in an amphitheatrical bowl, near a spiky hilltop obelisk, Cherhill’s mare goes back to 1780, and its design may nod stylistically to contemporary thoroughbred portraitist George Stubbs.

Once Cherhill’s horse had a shiny glass eye, made of bottles; now though it’s stone. It’s one of the most iconic of the WWHs, appearing on the village’s welcome sign, the nearby pub sign in Compton Bassett, and many brochures.

It overlooks the A4, no doubt causing many a passing driver to crane their neck and close-pass cyclists inadvertently, instead of advertently as normal. Access to the horse itself, and the obelisk, is from there on a permissive path up to the hillside. There are fine views back down.

A hot, noisy and busy ride – downhill, fortunately – along the A4, then an unpleasant hack up a hilly minor road past a golf course close-passed by impatient motorists, then a downhill to the Kennet & Avon canal and mercifully quiet lanes led to the outskirts of Devizes, and the long gentle cul-de-sac lane up to Roundway and the…

1.30pm Wiltshire has had many WWHs through history: a dozen or more. Many of them were lost to nature, as the grassy overgrowth reclaimed the chalk excavations. Devizes was an example, but in 1999 a new version was carved out on Roundway Hill, northeast of the town, to celebrate the millennium. It’s the most recent of the eight horses visible and visitable today, and the only one facing right.

It’s also the only one with a twinkle in its eye. And all eight WWHs are mares (obviously). Make of all this what you will.

At the top are were the expected sweeping views back down over the plain. I whizzed back down to ride along the canal towpath, which is surfaced all the way through town, going past the kaleidoscopic colours of moored narrowboats on this well-boated stretch of the Kennet and Avon Canal.

It was hot and I needed a break, so I stopped for shady lunch and drink at the splendid canalside pub the Black Horse – yes, I know.

On the western edge of Devizes is one of the wonders of the canal network: Caen Hill Flight, an astounding stepladder of 17 or so locks that bring freewheeling joy to the cyclist, and misery to narrowboaters, who take all day to labour up or down them.

Cycling west here is an extraordinary experience: a whole kilometre of downhill towpath, surely one of the longest downhills on a canal anywhere in the world. I needed the assistance: it was a long way from here along obscure lanes and roads to…

4.30pm Perhaps the most photographable, most iconic, and best of the lot. Certainly the biggest (55m by 52m, about half a football pitch, though it would be easier kicking downhill). Westbury White Horse dates back to 1778, possibly replacing an earlier one. It serves as a symbol of the town, and of the eight WWHs as a whole. Its concrete base makes it bright and overgrowth-resistant, prominently visible from the passing trains zipping between Taunton and London.

I had a long, hot, laborious climb out from Bratton to get there, up a straight narrow lane. But at the top, servicing the busy car park, was an ice-cream van, and – precariously pushing bike with one hand, and holding double-cone Mr Whippy in the other – I explored the plateau. There are huge views to the north over the vale, and the horse is splendidly horse-like in the foreground of most of them.

The best views of it for shape however are from down the lane into Westbury. I took my final horse snaps there and carried on freewheeling into town, and to the train station, to return to Pewsey.

It was a fantastic full day’s riding, tiring but totally satisfying. All eight Wiltshire White Horses bagged, with delightful scenery almost all the way, mostly on quiet happy lanes, and the frisson of Caen Hill locks en route. Chalk this one up as a success.

I’ll put up the route for this ride after the magazine article is published later in 2022.

Listen to my piece for classical guitar, written in 2022. It was inspired by the memories of this day’s ride. It’s in three movements, evoking the ride up to see a horse; the view from the top; and the freewheel back down. (MP3, total 14min 49sec)