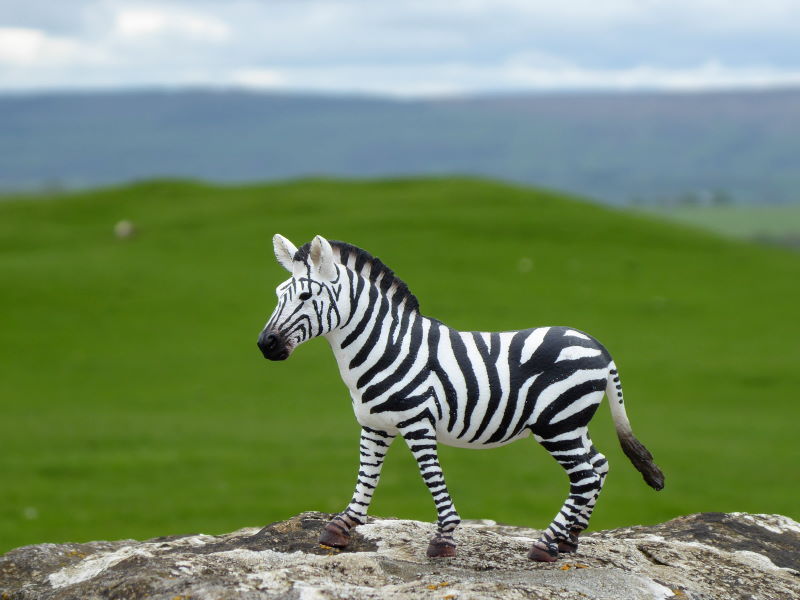 Day 4 of my Yorks Bottom to Top ride involved Yorkshire’s top shepherdess, a zebra crossing a zebra crossing, illegally altered signs, zebra-free MOD ranges, a solar eclipse washout, a Roman Bridge, the northern border at the Tees – and of course the highlight of the trip, Zebra Hill itself. I earned my stripes today.

I had a slap-up cooked breakfast from my kindly B&B host Robin, and set off north up Wharfedale just a little concerned about forecasts of headwinds, which turned out much more favourable than I expected – in fact I seemed to have westerlies behind me much of the way.

I stopped for a quick snap at Kilnsey, the original setting for the soap Emmerdale (Farm). Wikipedia lists 76 TV series set in Yorkshire, from Oh no! It’s Selwyn Froggitt to Downton Abbey via Gentleman Jack and Last of the Summer Wine – quite a range there. (Oddly the list omits Last Tango in Halifax.)

I left Wharfedale at Buckden, turning east up the Cray road, one I’d never cycled before. It’s a stunner, with sweeping views back down to the Wharfe, and then – after the crest – down Bishopdale the other side.

There were countless waterfalls that had sprung up with the recent rain, and I saw a shepherdess guiding her flock across one of them right at the summit. She must have been the top sheep farmer in Yorkshire.

Scooting down Bishopdale I had my first view of Zebra Hill, in the distance, and quiet flattish or downhill-trending main roads took me effortlessly to Leyburn.

I had scoped Leyburn out on Street View, because it has what must be the closest zebra crossing to Zebra Hill. The striped traverses were devised in Britain in the 1940s, to accompany the flashing orange beacons that signified a pedestrian crossing. The name is said to have come from a remark by Labour MP Jim Callaghan. (It is however a tabloid invention that later, as PM, he was supposed to have said ‘Zebra crossing? What zebra crossing?’).

Zebra Hill itself is just a couple of miles up from Leyburn, north of the village of Bellerby. This is a pleasant little place with a green, a pub, and a sundial.

It also has a welcome sign which I couldn’t help adulterating, changing BELLERBY to ZEBRA HILL, and the ‘slow down’ tortoise to a zebra. (There are no signs for Zebra Hill itself anywhere, so this would have to do.)

Nobody knows why Zebra Hill is so named. It appears on the first Ordnance Survey map series in the 1850s, so dates from before that, but none of the three species of zebra (Plains, Mountain, and Grévy’s) are native to the Yorkshire Dales.

So why? One local theory is that it may be related to the travelling menageries – mobile zoos, in other words – which were part of the popular entertainment circuit in the early 19th century. Zebras were a major attraction, and in contrast to other animals (which were typically described as fierce or wild) they were promoted as being ‘beautiful’.

One leading such business was Wombwell’s, which had Darlington connections. Its menagerie certainly visited Leyburn in the early 1800s, so who knows, perhaps someone overcome by stripy equid beauty commemorated the fact in the geographical feature.

There are no zebras mentioned in the Bible or Shakespeare. However, there are three references to ‘cebra’ in Don Quixote. These appear to mean ‘zebra’, though in amongst Cervantes’ menagerie of exotic and fanciful beasts, it’s not certain. You’ll find no zebras in Dickens or Orwell, and only one in Ulysses (the James Joyce one, not the more famous one, you know, the Catherine Cookson one) which anyway is a ‘zebra skirt’, not the actual animal. The literary winner for zebra mentions appears to be the nine occurrences in Karen Blixen’s Out of Africa, which perhaps isn’t surprising.

(The craft of lion-taming is said to have been perfected in Darlington at that time by Wombwell scion Frank Bostock, who discovered that the big cats are afraid of upturned chairs. How? From some sort of improvised self-defence when attacked by a lion in a drawing-room?)

The hill itself is no great peak – more a green rounded top in a field of sheep, 280m / 919ft high – but there are fine views west towards Wensleydale and east to Richmondshire. Next to it is a Ministry of Defence area with no public access.

But I was happy to be here, and it felt an exhilarating place to be, with a definite made-it feel, here on the roof of the Dales.

But I still had some cycling to do to complete the End to End. Piercebridge, on the border, was another dozen miles or so. En route I passed through Richmond, famous for its Regency Car Park which dominates the market square, and grabbed a coffee and cake to fortify me for the last push.

And I snapped one of my favourite signs. The AA put up a yellow plaque in Richmond to mark the 50-second total solar eclipse of 29 Jun 1927, whose line of totality crossed here. Zebra Hill was one of the best viewpoints, but unfortunately the weather was as cloudy and wet as it was today. As the Darlington & Stockton Times recalls, nobody who gathered there that drizzly morning saw anything worthwhile. The next one visible from the UK wasn’t until 11 Aug 1999, and the only domestic one in my lifetime from now will be that of 23 Sep 2090, when I’ll be 130.

I took pleasant, quiet back roads through Aldbrough St John – a village with a rather epic green – and finally a mile or two along Dere St, the old Roman Road through the north of England which crossed the Tees at Piercebridge. The remains of the bridge are in a field by the river, which has changed its course since then.

The modern bridge was journey’s end. My Yorkshire End to End, A to Z, Bottom to Top, complete. Hmm; curious how at neither point is there a WELCOME TO YORKSHIRE sign. To mark my finish photographically I had to make to do with the one for Darlington. That’s where I was heading now, for my train home.

It’s been another mightily enjoyable trip, with many of Yorkshire’s facets on vivid display. Industrial and post-industrial towns; awesome Pennines and Dales scenery; friendly towns and villages; and quirky stuff everywhere.

And the zebra? It’s a model by Schleich of Germany, who make beautiful, detailed and accurate animal figures. It cost all of three quid from Smyth’s. It’s on my desk now, looking at me perkily, a nice reminder of a lovely few days exploring my home county.

Listen to my piece for classical guitar, in three short sections, written in 2021. It was inspired by the memories of this day’s ride. The unusual scale of the first two sections is made up of two clashing halves (E-G-A#-B, ‘black’; B-C#-D#-E, ‘white’) and mimics the way zebras’ moving stripes confuse flies. (MP3, 6min 19sec). You can follow the score of the piece on my YouTube video, or simply hear it in the player below.