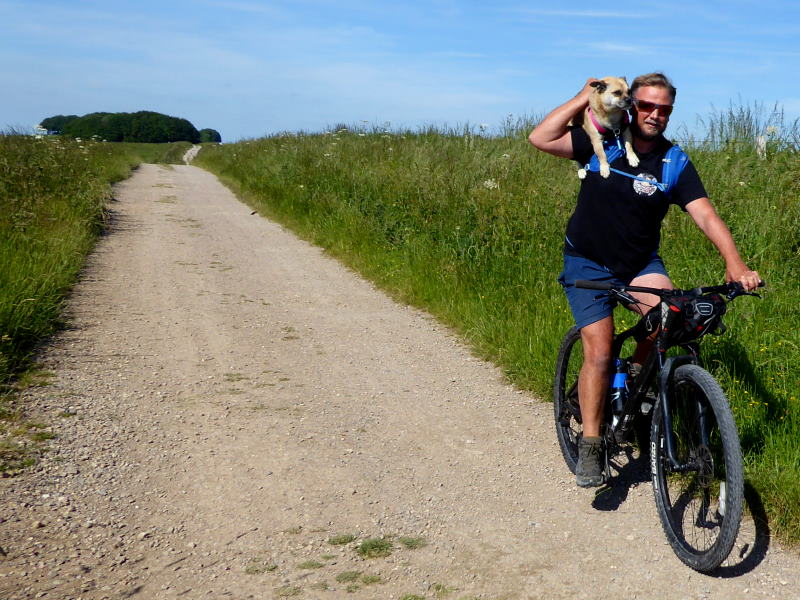 Day 4 of the KAW involved Stonehenge at solstice, bangs and crashes on Salisbury Plain, giant white horses, a canalside pub, mystical Avebury, a man carrying a dog to his ear, and the fabulous Ridgeway.

From Amesbury we took a rather roundabout offroad way to Stonehenge. We’d forgotten it was midsummer day: later in the afternoon, the whole stone shebang would opened up to solstice-worshippers.

Police were gathering and tents were sprouting in the temporary campsites. Cheery marshals told us, with the wry smile of experience, what sort of generally benign mayhem they’d be in for that long evening and short night. There’d be no alcohol, no drugs – they’re banned from the site – but plenty of eccentric spirituality and questionable fashion decisions.

From here the KAW route takes a series of byways across Salisbury Plain. We found this unpleasant, full of bangs and crashes. And I’m not talking about the artillery of the army exercises that occupy the area most of the time, but the awful surfaces. The tracks were an unpleasant combination of deep uncyclable ruts and uncyclable overgrowth.

At first we grasped the nettle – literally: they were thigh-high and ravaged our exposed legs. But with no scenic reward (it’s called ‘Plain’ for a reason) we soon came off on to the roads, which were not quiet but preferable. At Tilshead we stuck to the A360 rather than the Imber Range Perimeter Path, whose visual attractiveness matched its prosaic title.

But, suddenly, at last, from Gore Cross, everything changed for the better. A metalled lane ran up the hillside to the ridge, and became a chalk way with glorious views down to the flatlands west and shapely peaks to the north.

We could see two of Wiltshire’s eight white horses, giant figures carved into the chalky grasses. On a sunny morning, all clean blues, greens and whites, we were the only cyclists on the track. The whole wonderful experience was ours.

Coming down off the ridge at Chirton Maggot through the jungle of a massively overgrown and rutty bridleway was a challenge, but we survived unscathed to lunch at Chirton.

The guidebook suggested the offroad climb up to Tan Hill from here was hard. Given the experience we’d had on surfaces it had implied were easy, we took no chances.

There were other reasons to be wary. My guidebook was donated by my friend Nick, who rode it last autumn on his tourer. On the books’ maps, he circled in black biro the areas he thought had surfaces bad enough to avoid at all costs, some with emphatic bursts of exclamation marks and arrows pointing out on-road alternatives. I’m surprised his pen didn’t run out.

Tan Hill was decorated in Nick’s hand not only with circles, exclamation marks and double-strike arrows, but also, uniquely, an asterisk.

We took this as a sign. I suppose, being an asterisk, it was anyway. (Nick used to lecture on philosophy, so may be able to help me out on questions of semiotics.)

So we cycled joyously along flat pleasant smooth paved lanes to Honeystreet, a canalside village whose Barge Inn is right on the waterside, and had a pint with lunch in the sunny beer garden.

From here the road went up and over the hillside right past the Alton Barnes White Horse, one of the two we saw from the ridge earlier (the other was the Devizes White Horse, created in 2000, and the only one of the eight facing right; trust a millennial to have its own ideas on identity).

The other side was a plummet down towards Avebury. We nearly got wiped out by a school coach speeding round a blind bend towards us on the wrong side of the road. And also on the right side of the road. Because it occupied the entire width of the single-track road.

Avebury has a stone circle. It’s certainly not as monumental as Stonehenge, but is much more intimate, the connoisseur’s choice: you can go right up to the stones, which sit in and around the village, and approach them by a long grassy avenue bordered by lines of mildly dramatic slabs.

There were quite a few amiable hippies here for solstice, looking floaty and dreamy and happy, playing home-made music on drums, guitars and whistles. I thought about stopping to listen to it, but I’d suffered enough psychological damage from that coach near-miss, so I pressed on.

Nigel was feeling out of sorts so he chilled out in Avebury before taking a shortcut to Marlborough, our stop for the night.

I, however, had the joy of the long way round, doing a route I’ve wanted to do for, oh crumbs, thirty years. The Ridgeway is a candidate for ‘Britain’s oldest road’: for at least 5,000 years it was a trading route across the safety of the ridgetops right across the country.

Now it’s a walking route, and the trade is more likely to be in tea and cakes than hides or axe-heads, and the central part – from Avebury to Goring – is cyclable. And now, at last, I was doing it all.

I did the Ridgeway’s first few miles two years ago on a wet, sleety December Sunday, but this was gloriously different: a perfect summer’s day: sunny, cloudless, breezy not windy, warm not hot. After the climb up from Avebury along the Herepath, which sounds like the title of a poem by Ted Hughes or someone, I joined the Ridgeway itself and cycled north.

The first mile or two was slightly challenging – groovy, in a physical rather than fashionable way, and often overgrown – but it soon levelled out to an inoffensively changing mix of gravel track, surfaced car-free road, chalk byway and smooth-enough grass plain. The views were expansive, the feeling world-topping.

A campervan of nice but bewildered middle-class types whose professional skills clearly did not extend to reading maps – I broke the news as gently as possible that the track would soon get impassable and that, with nowhere to turn around, they had a mile or two of reversing in prospect.

My favourite fellow traveller though was a guy on a bike who I thought was holding a boombox to his ear with one hand while, impressively, negotiating some tricky chalk singletrack with the other. But that was no boombox: that was a dog.

I revelled in the views, and snack opportunities, of Barbury Hill’s earthworks ‘castle’ and Smeathe’s Ridge.