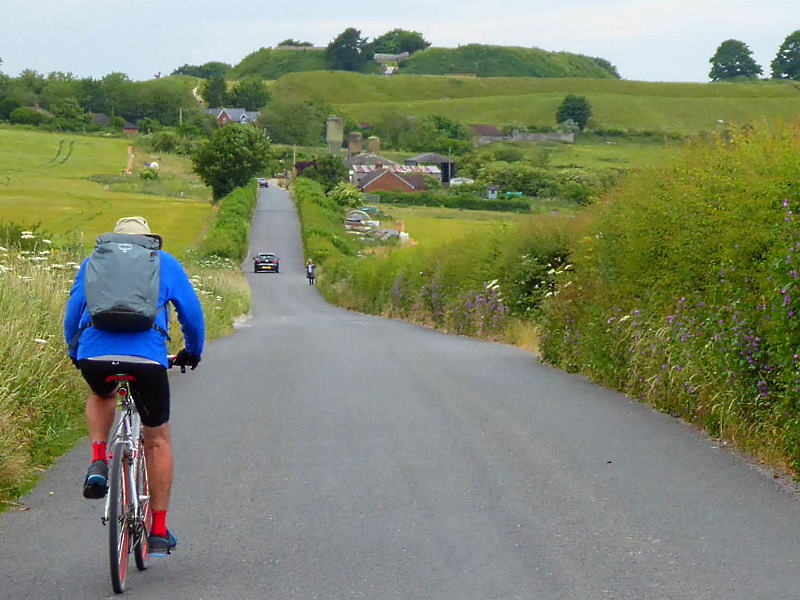 Breakfast at the Sustainability Centre was fruity and healthy, but I still enjoyed it. We shuddered at the memory of yesterday’s surfaces, much as our wheels had on them, and so took some perfectly good and quiet lanes parallel to the official route.

We rejoined it to go up and over Winchester Hill, with a bit more pushing, and took the brief stretch of railtrail to Exton that is like every railtrail in the land.

After the long steady tarmac climb up to Beacon Hill, we again avoided the bumpy, tedious South Downs Way and took roads to Cheesefoot Head. From there it was bridleway past Telegraph Hill and down to Winchester, for many the start and finish of the KAW, but for us the halfway point.

A statue of King Alfred stands proudly in Winchester’s car-choked Broadway, though why he’s holding a sword by the blade instead of the handle is anyone’s guess. No Health and Safety in those days I expect.

Perhaps he’s testing it for a quick bit of barbering work: the romantic late-Victorian work depicts him with extravagant beard, though contemporary coins depict him as clean-shaven.

Alf died in the town in 899 and was buried in the cathedral; in 2014, researchers identified bones recovered from nearby Hyde Abbey as a possible match for him. Life was tough, comforts few and prospects limited in the 9th century, a situation that many offroad bits of the Way today replicate nicely.

Having snapped and selfied at the statue, and having stocked up at another Waitrose, we left the town on decent lanes and surfaced byways. Those tedious, poorly-surfaced, dull-viewed bridleways and paths were behind us at last.

Oh. No they weren’t. After Broughton things got bad again, and after more skiddy, pushy, cumbersome misery up to and including Middle Winterslow, we decided to take roads come what may for the rest of the day. Even the nasty, busy, hectic A30 was preferable to tedious offroad.

And this was in the dry middle of summer. Goodness knows what we’d have felt in muddy weather. Prickliness and tingling in the feet, probably. They’re apparently the first symptoms of trenchfoot.

The wind-blasted earthworks of Old Sarum, an old hilltop fort and original site of Salisbury itself, was a relief. It was just closing when we arrived, and we had the site to ourselves. We struggled to stop the wind making off with our picnic and enjoyed the sight of Salisbury Cathedral rising out the town, down there below.

Good, quiet lanes along the Avon got us to Amesbury (pop. 8,900), perhaps the smallest town in England to have a Wetherspoon.

This proved useful, as our accommodation pub’s bar was closed, and we could enjoy a pint for under half the going price hitherto. For budgetary reasons, therefore, I had two. Nigel, also pleased with the new local economy, had fish and chips, followed by dessert: chicken jal frezi.