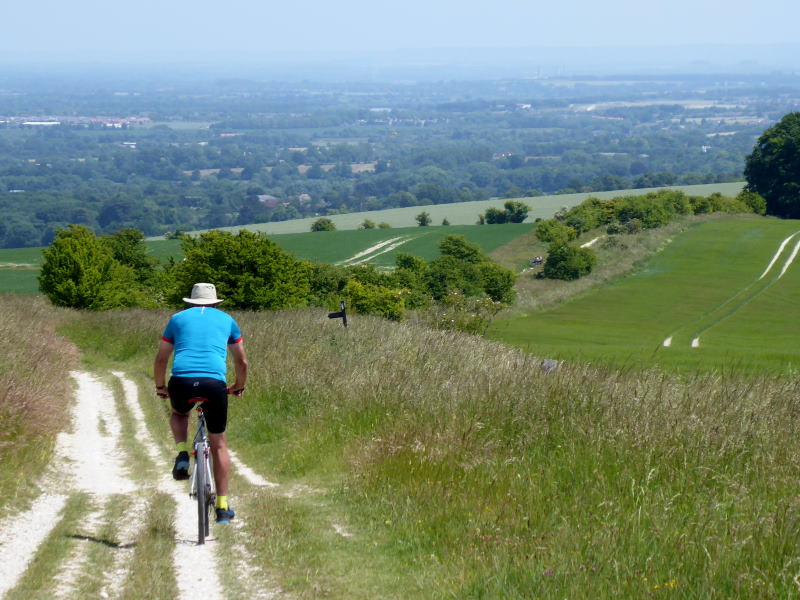 Day 5 of the KAW involved plenty of lovely Ridgeway, an ancient burial site with a poignant modern twist, a bizarre split church, and the completion of the circle back at Reading.

The railtrail swiftly got us from Marlborough back to the route at Ogbourne St George, where we resumed our pleasant eastward progress on good chalk tracks. We passed another white horse – not one of the Wiltshire ones, but the much older Uffington one in neighbouring Oxfordshire, the one that looks like Picasso sketched it.

It used to look more horsey, the guidebook reckoned, and less like a financial services company’s logo. The current look is the cumulative product of clumsy maintenance over the centuries. Not that this mattered, because you can’t see any of it from the route anyway.

You can, however, see lots of sweeping views, usually down over the plains to the north, but occasionally to the south too. The Ridgeway is a cracker.

You can also see a very impressive neolithic creation just a mile along from the white horse. Waylands Smithy is a long barrow built to house some privileged dead 5,500 years ago. You can poke your head inside and see the entrance to the chambers. It’s not quite the Great Pyramids but it’s mighty atmospheric.

There was a poignant addition today: a group of friends were here to scatter the ashes of the late brother of one of them. (Yes, it’s illegal, but, well, what they gonna do? Take the urn’s contents to court?)

The bereaved bloke, another cyclist, clearly wanted to chat, to tell us about his departed brother, about the fun they used to have on their bikes together. Cancer, it was. Sixty-five. Never got to see his pension. He put a brave, jokey face on, and his stories made us laugh. But there were tears in his eyes. There were in mine, too, as I rode away. Crikey. Carpe diem.

From here to Streatley – the end of the cyclable part of the Ridgeway – was a long, generally delightful rumble along decent tracks amid super scenery. We stopped for a snack at a monument, the most vertical thing for miles along the path, and whooped with joy at the long final downhill to the side of the Thames. Mostly because there was the Swan pub there, and we were well thirsty.

There were two final surprises in the ten miles left between Streatley/ Goring and Reading. The first was being expected to cycle through an uncyclable wood, a muddy assault-course of tree roots, fallen trunks and staircases. Bad news for any Daleks hoping to do the King Alfred.

The second was the church at delightful Mapledurham, a quaint village often used for film shoots. It’s one of only two in the country (the other being St Andrew’s in Tichborne, Hampshire) to be split, Berlin-style, into Catholic and Protestant. Most of the inside is regular Anglican, but (fenced off from it, thankfully without watchtowers or trigger-happy guards) a side chapel is firmly Catholic, a concession to the allegiance of the owners of the estate.

A short trundle later and we were back at Nigel’s place, ready for a shower and a drink, the ride completed.

The King Alfred Way is a mixed bag, with some boring stretches and some wonderful bits.

What that adds up in practice to I’m not sure. But I suspect it’s less than the sum of its parts.

In short, if you really like offroad riding, and prefer a bumpy but car-free bridleway to a country lane, this is a great route for you. If it’s the other way round, you will find a lot of the KAW tedious.

Especially as I don’t have to do it again.