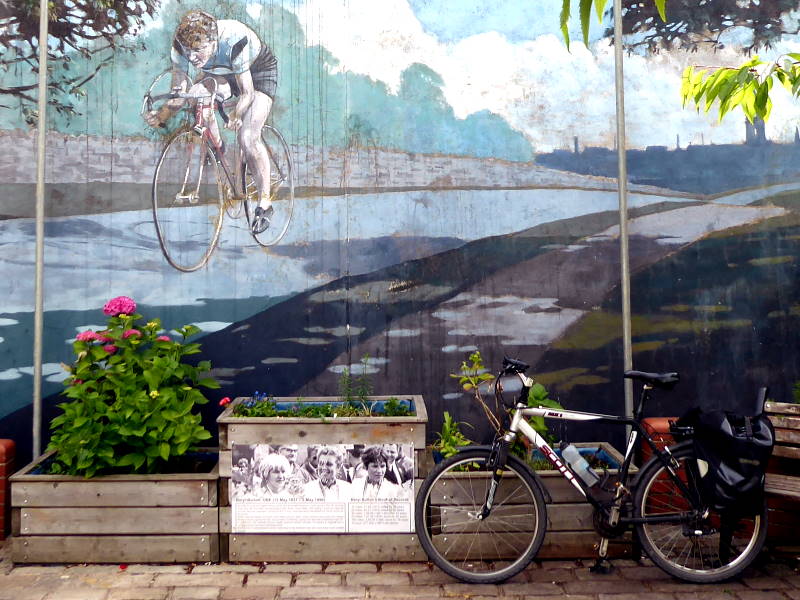 ‘BERYL BURTON OBE / Was a cycling phenomenon’, states the blue plaque in Morley town centre. The ‘Yorkshire housewife’ (as they called her then, instead of ‘cycling superstar’) indeed was. She dominated women’s road, track and time-trial cycling in Britain through the 1960s: almost unbeatable from 1959 to 1983, winning 90 UK championships and seven world titles. Her 12-hour record of 277.25 miles, set in 1967, was famously faster than the men’s record for the time. It wasn’t bettered by a woman until 2017.

Not bad for an amateur who worked on a rhubarb farm, and would cycle back from work to make the family tea before riding out again for an evening race.

She lived in Morley, a hilly former textile town a few minutes’ train ride southwest of Leeds. It celebrates her remarkable achievements with Beryl Burton Gardens, a small area just off the pedestrianised main street.

The mural of her in full swing shows a view unfamiliar to fellow racers, who only ever saw her backside in the distance. Perhaps on the right of her, silhouetted, is husband Charlie. He supported her as mechanic, advisor and driver, in an era when many a Yorkshire bloke might have gone darn t’ pub instead.

Or perhaps it’s just a race marshal logging another unbelievable time. Because the other silhouetted figure doesn’t look like it’s Beryl’s daughter Denise. She became a racer herself, with whom Beryl had an occasionally prickly rivalry, but largely collaborative relationship (they won tandem titles together).

Anyway, as I stood admiring the mural, a local bloke, maybe 60s, stopped to chat. (They’re an approachable lot here in Morley. In fact, they usually approach you.) They’re clearly proud of the town’s sporting overachiever.

Ah yes, he said, we used to see her regular round here. Back pain, she had. Terrible, it were. Rode to blank it out, like. There were her, and t’other lad that were notorious, like – monk, he were. Used to walk between abbeys. Robes, the lot. Nice feller. Beryl, she worked at t’rhubarb farm. Out by Tingley roundabout. Not much left now. Few sheds, all derelict, mind.

My friend informed me of another Morley claim to fame I’d heard of before: an amusing anecdote told by Eric Morecambe on Parkinson (which I remember seeing live) about his emergency dash after a heart attack in the town, rescued by a local man called Walter Butterworth.

(Ah yes, my friend said, we knew the Butterworths. Friend of me dad’s, Walter was. It’s evidently a close-knit community here in Morley. Not a good place to have a clandestine affair, presumably.)

I could have cycled out to Tingley roundabout to see the dilapidated remains of Beryl’s workplace – where, being the competitor she was, would often outdo the male pickers and sorters in stacking finished crates. But Google Maps suggested there was little to see, and anyway I had more Beryl memorials to explore.

Back in Leeds, I rode along the canal to Woodrup Cycles on Kirkstall Road. The side alley wall has a stencil of Beryl, with Charlie and Denise, by local artist Stewy. They’ve had to protect it from graffiti with perspex, so the effect is a bit marred by reflections, but it’s still a grand thing.

From there I headed on the train to Knaresborough. Beryl raced for Knaresborough CC, and the town honours her handsomely. The Beryl Burton Cycleway (NCN636) runs there from Harrogate, mostly car-free.

The last mile is a rather rattly tarmac path alongside fields that plummets downhill through a wood to the riverside, just by a location associated with another famous Knaresborough woman: Mother Shipton’s Cave. Even Beryl would be taking it slowly down here.

At that end of the trail (or the start if you’re going from Knares) there’s an illustrated plaque listing some of Beryl’s remarkable achievements and a memorial stone.

And in the town centre itself, just opposite Knaresborough House on the High Street, is one of the celebrated trompe l’œil windows. Many Georgian-period houses were designed with window-shaped brick spaces, either to avoid window tax or simply for aesthetic reasons. A fashion in Knaresborough is to paint them up to look like real windows with people leaning out of them, waving or throwing things, for instance.

Beryl’s window shows her on the bike, of course, whizzing along to set yet another improbable time, perhaps about to overtake a man and imperiously hand him a sweet as she passes. (Which she did in that 1967 run mentioned above.)

There are other memorials to Burton. Manchester’s velodrome for instance has a display dedicated to her.

And the ‘solar system cycleway’ from York to Selby – opened by Beryl herself in 1987 – has a plaque to her at the site of Escrick station, unveiled in 2022.

And in Norwich, Bournemouth, Hereford, Watford and the Isle of Wight, you can hire a Beryl Bike to get around town. The citybike share scheme named them after Burton (with the gemstone beryl, aka emerald, in mind too).

I decided to channel Beryl’s spirit, but in a different way. No hurtling along for twelve hours at 20mph for me. It was time for me to get home and make the tea.