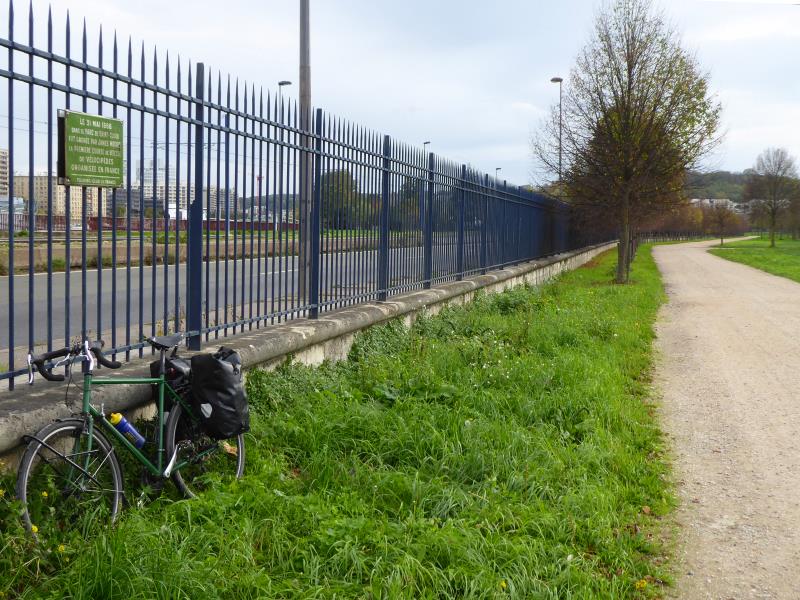 The world’s first ever bike race took place in Paris on 31 May 1868, and was won by English rider James Moore. So the story goes; but as we know, stories are often cobblers. (See also Kirkpatrick Macmillan, Leonardo da Vinci’s designs for a bike, my-helmet-saved-my-life etc.)

However, I was in Paris researching routes for an article, and I couldn’t resist visiting St Cloud Park – the venue for that legendary meeting over 150 years ago – to see what I could see.

Saint-Cloud is about half an hour west of the centre. Getting there was an adventure: Rue de Rivoli is one of many main thoroughfares recently kitted out with lavishly wide cycle lanes, as part of mayor Anne Hidalgo’s excellent reallocation of road space. After that it was up the Champs-Elysées and across some roadworks (more cycle lanes in the making) to the tranquil woods of the Bois de Boulogne.

There’s a cycle track round the racetrack of Longchamp here, and here’s a tip: do it clockwise. If you try it the other way you’ll learn a lot of French slang, shouted vigorously at you by hundreds of road cyclists bearing down on you in bunches.

A pleasant old bridge across the Seine got me to the village of Saint-Cloud itself, where I resisted the siren call of bistros and bars that were rather cheaper than back on the Champs-Elysées.

Cycle historians aren’t convinced: it seems there were several earlier races, and James Moore’s event seems to have been won by someone else in any case. The identification of JM as the first rider ever to top a podium seems largely based on his own, very certain, recollections in later life. Hmm; my grandad had his own equally certain recollections about the old days which turned out to be complete fabrications, so I’m with the historians on this.

Nobody knows the exact course of that first meeting; only its length (1.2km, about three-quarters of a mile). I rode what I thought would be close in feel to their experience, along some half-decent gravel paths lined by trees that didn’t exist then.

It was stirring on this damp, misty day to connect fleetingly with the spirits of those pioneering competitors of half-a-dozen generations ago, careering round on their wooden-frame, woden-tyred, clanky, direct-pedal machines. But, even on my multiply-geared, pneumatic, chain-driven, springy steel-frame touring bike, I suspect they’d have been faster than me.

Many questions remain unanswered. Who actually did win the first race? Were they doped up on opium or absinthe? Did the victors spray champagne on the podium? Were the riders of the second race criticised for not being as tough as the riders of old, ie the ones from that first race?

Anyway, my communing with the ghosts of the past done, I returned to the centre via another excellent segregated path alongside the north bank of the Seine. Nobody knows who won the first bike race, but I could at least doff my chapeau to someone who had revolutionised the world of cycling for the better.

No, not James Moore. Anne Hidalgo.