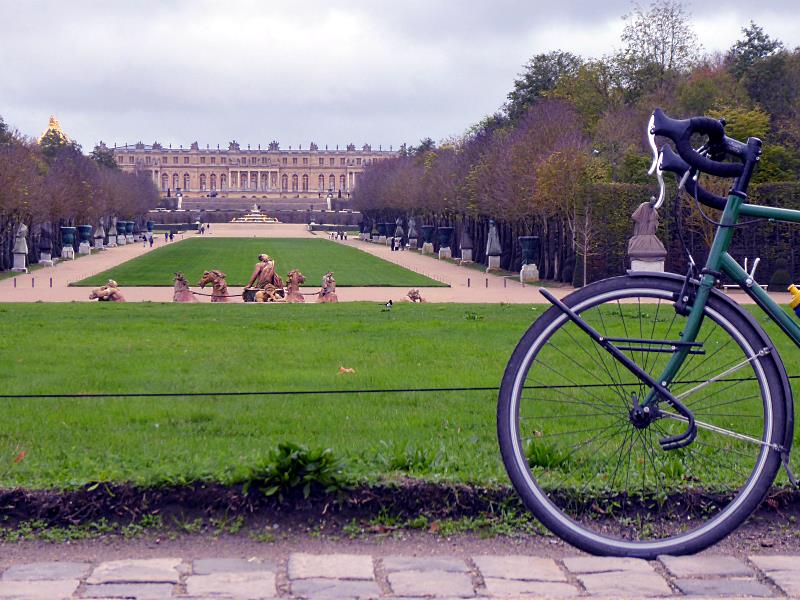 I was researching a circular day-ride today, west from Paris to Versailles and back. I’m a great fan of monarchy as you know, and think we in Britain should preserve it. I hear that formaldehyde is the curator’s choice.

Joking aside, I have great respect for Charles et al. It all goes to show how immigrants, if given appropriate state aid, can thrive despite knowing nothing about everyday life in Britain.

No, but seriously, I have a soft spot for the royal family. It’s a bog in the North York Moors.

OK, enough cheap gags about hereditary privilege. It’s not very appropriate. More appropriate is to have some stupidly pricey ones, at the taxpayers’ expense.

So, anyway, I rode out from central Paris today through the pleasant St Cloud Park, where I was two days ago. This time I carried on west, heading through the quiet woodsy lanes of the Bois de Boulogne, accompanied only by birds and the odd cyclist. This was the French royals’ former hunting ground, before they got hunted down themselves. (St Cloud Park itself has a remarkable history and long connection with royalty, as a Tim Traveller video amusingly recounts.)

Cycle lanes on main roads then whooshed me into Versailles itself, and the grand palace. You can’t take a bike in through the main gates, but half a mile round to the right side is the Porte de la Reine, which welcomes bikes into the grounds.

Sadly, I suspect the only revolutions I’ll be seeing in my lifetime will be of my bike wheels. At least I got plenty in today. After bimbling round Versailles’ many gravel roads and waterside paths, I headed back into Paris on the main roads, the D10 and D910.

Until 2020 these were nasty to cycle, but segregated bike ‘Corona lanes’ put in during lockdowns have been formalised and now run almost all the way back to the Seine, where you can ride along the Rive Gauche on some even better, wider, segregateder, cycle paths, right up to the Eiffel Tower.

Ah yes, the Eiffel Tower. A makeshift structure that was only meant to be temporary, but proved so popular it has become an icon of Paris, which is unthinkable without it now. Funnily enough, the same applies to the city’s rapidly growing network of cycle lanes.