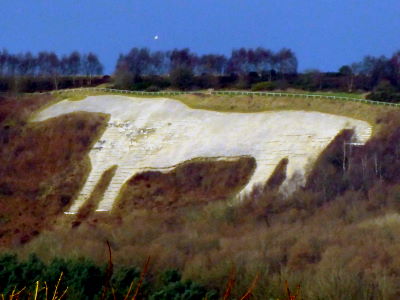 Last week, amid cycle-route research round Swindon, I cycled round a few of Wiltshire’s White Horses – giant figures cut into the chalky hillsides (plus Uffington’s famous, and much older, example).

So today I cycled up to Yorkshire’s own White Horse, at Kilburn, on the southwest edge of the North York Moors about twenty miles north from my house. The quiet roads and farm tracks were dead flat up to the castle village of Crayke (pic), which put me in mind of a Tuscan hill village, except it was freezing cold with a brisk southerly. 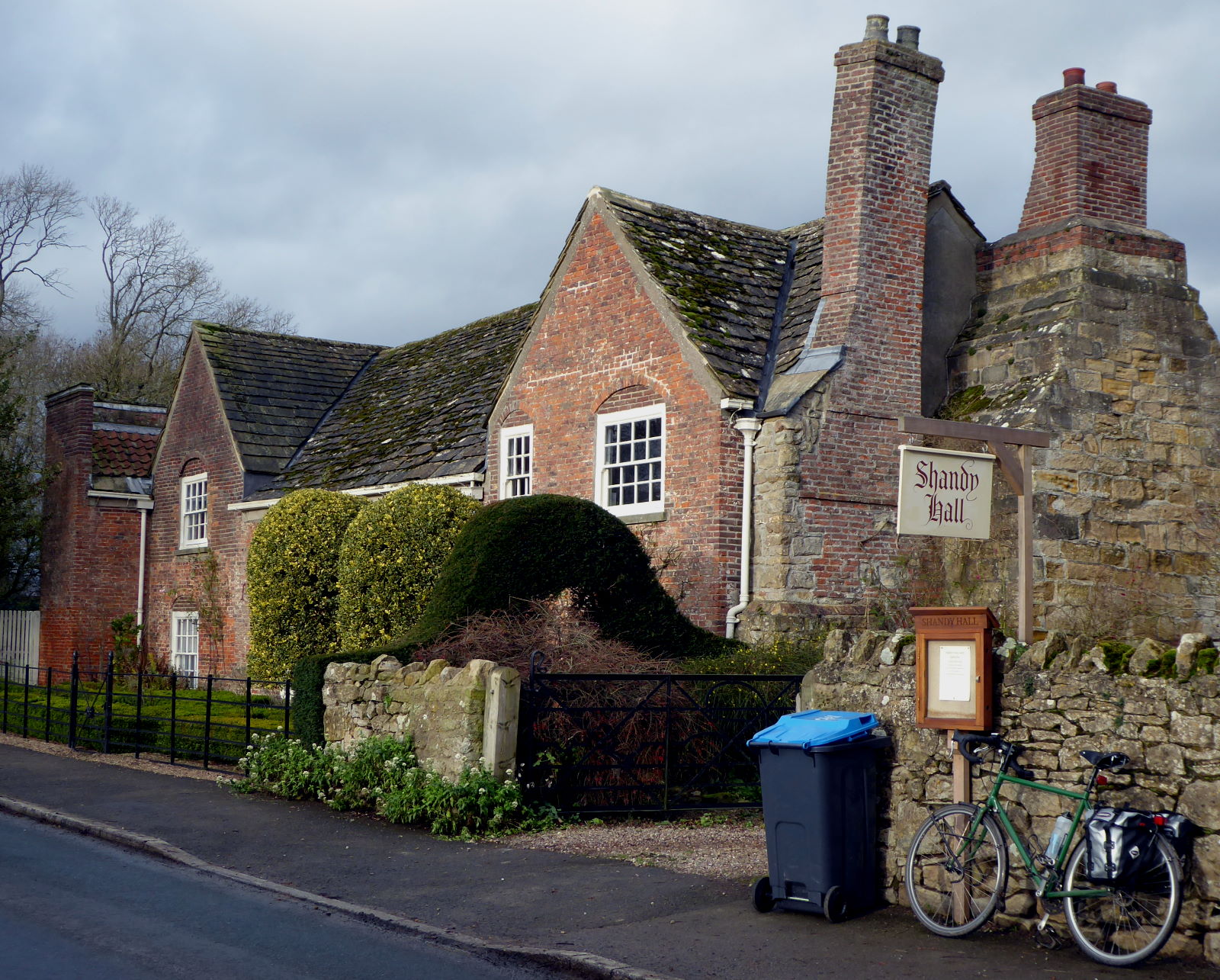 A bit further on at Coxwold, as the landscape started to get a bit rolling, I stopped off at Shandy Hall (pic). This was the home of Laurence Sterne, who wrote Tristram Shandy here in the mid-1700s. It’s a book I found impossible to put down. And I tried everything: drowning it, smothering it, poison… 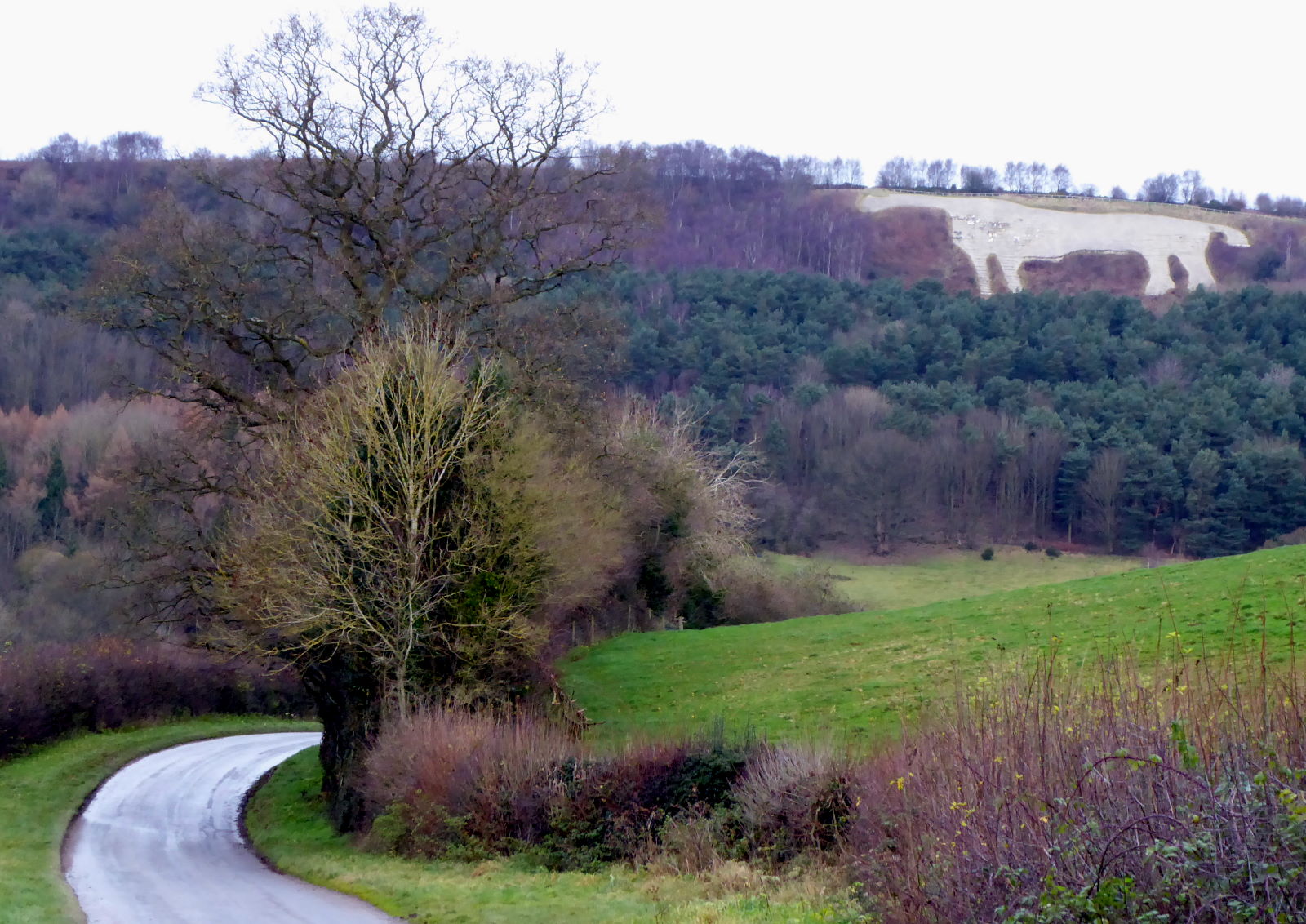 Approaching Kilburn, the horse began to loom. It was built in 1857 on the initiative of a local businessman inspired by Wiltshire’s chalky nags. It’s 314 feet long and 228 feet high, and twenty people can stand in the little grass circle that marks the eye, though that doesn’t sound very wise in these socially distanced times.

Kilburn is also world-famous in Yorkshire as the home of 1930s furniture craftsperson Robert Thompson, whose schtick was to include a small carved mouse figure on his works. Similar luxury murine pieces are produced in the workshop there now – two-grand chairs and twelve-grand refectory dining tables, that sort of thing – though I didn’t have time to pop into the visitor centre.

You can get closer to the horse, but there are two problems. First, the closer you get, the less it looks like a horse, and the more like a vast smear of glaucous gravel. Second, you have to cycle 520 feet up over a mile of 1 in 4, which doesn’t sound any friendlier as 160m over 1.5km of 25%. 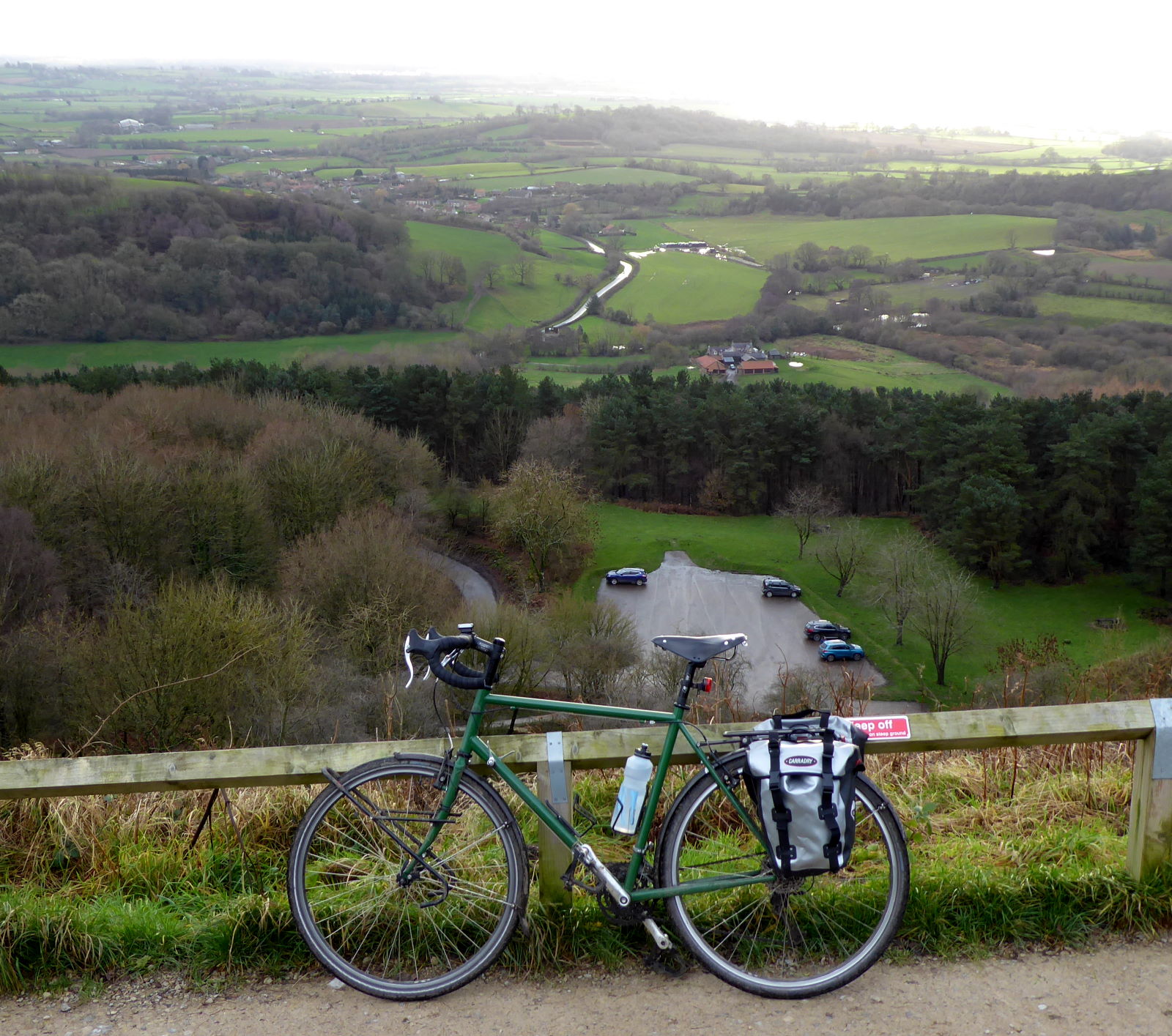 Still, I managed to clamber my way up the switchbacks to the top of the ridge, and enjoyed the fine view back south from the top (pic). I spotted the magnificent, unmistakable towers of York Minster, but then realised they were the cooling towers of Ferrybridge Power Station. 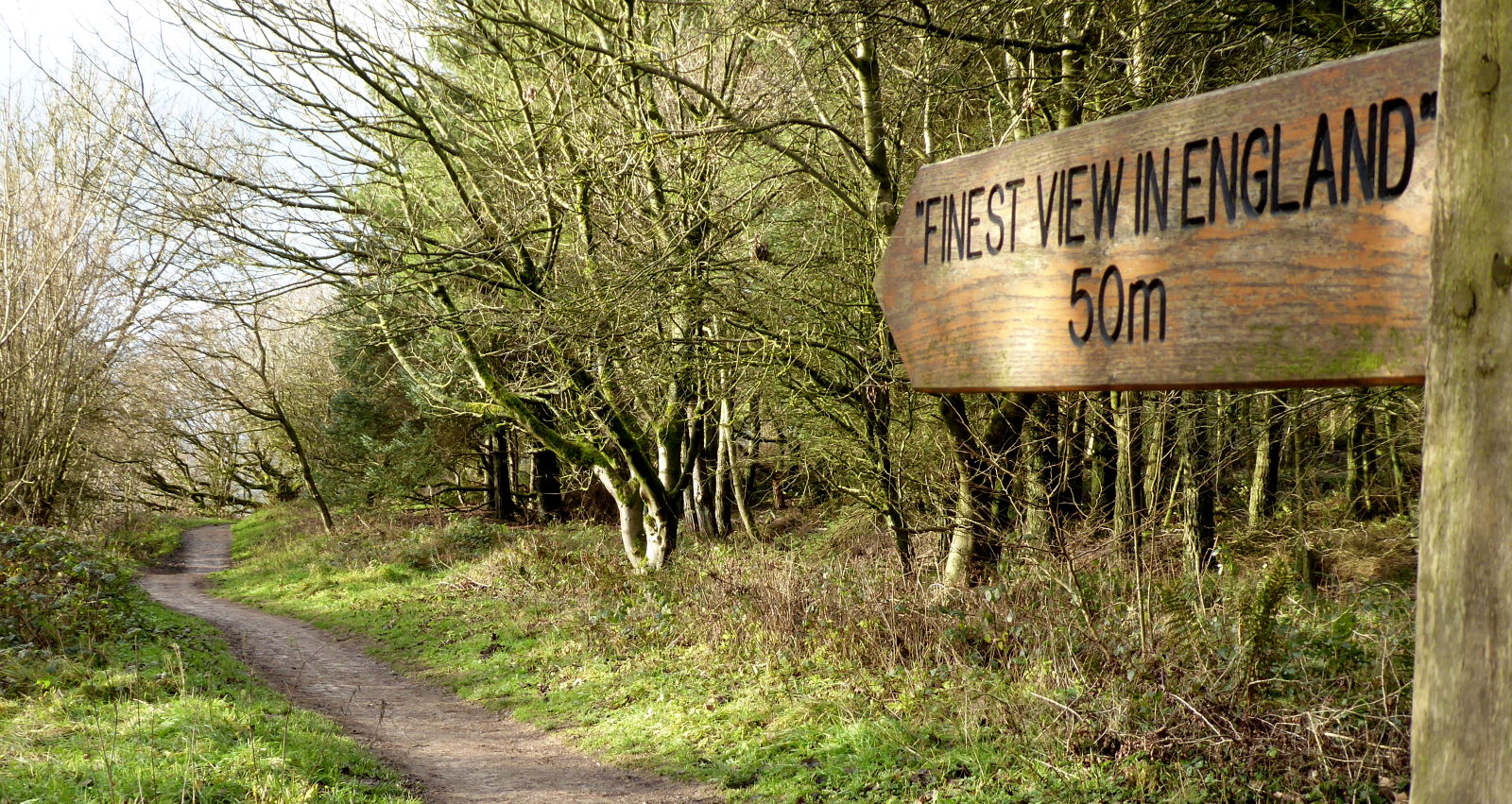 A short ride away, on the top of Sutton Bank, is this sign (pic) for the ’Finest View in England’… 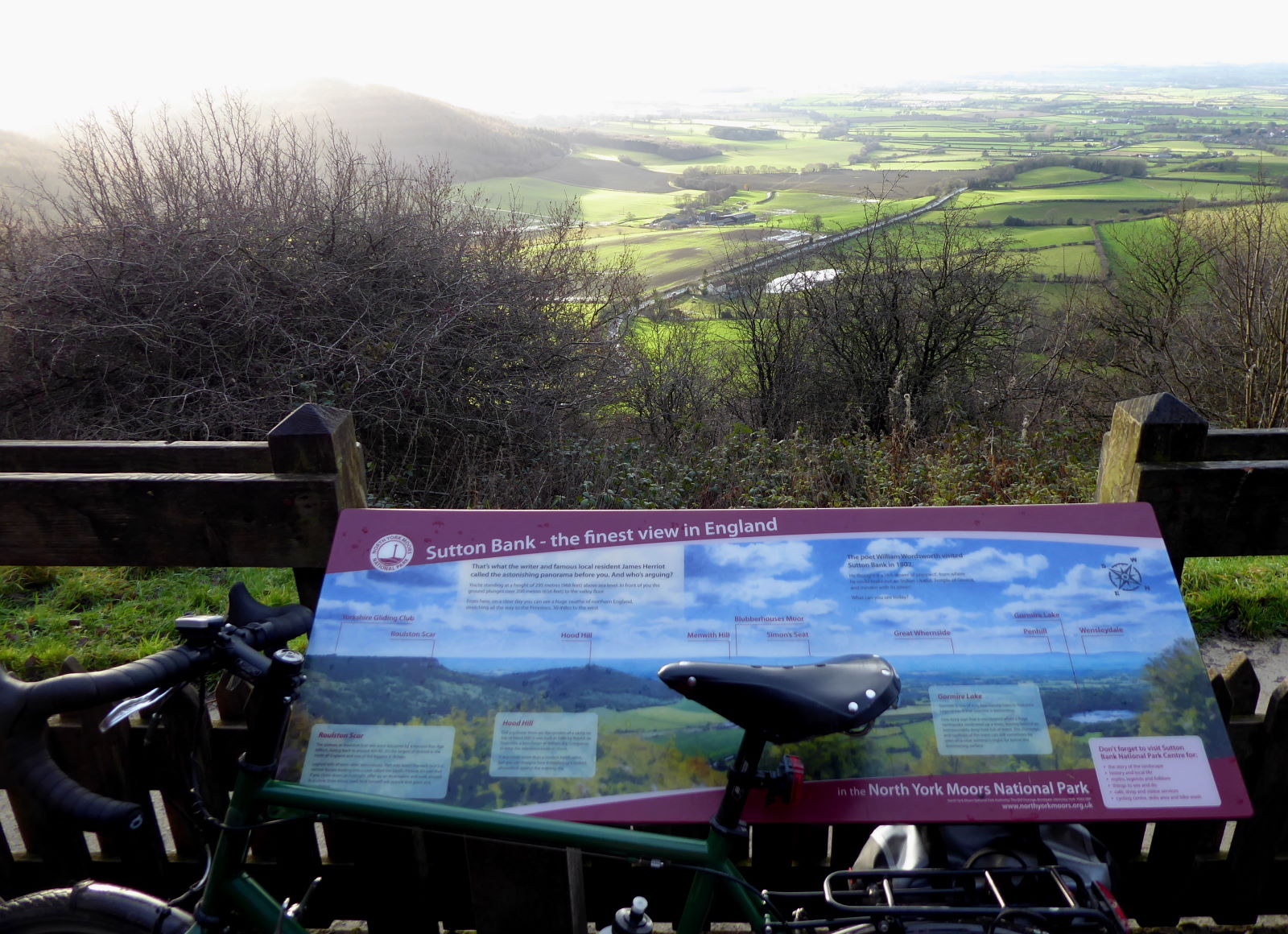 …at least, as it was in the judgement of James Herriot, whose vet novels are based on his experiences in Thirsk just down the hill. I don’t disagree with him – it’s sweeping and grand (pic) – though if you spend your working life looking up the backsides of cows, you’ll be well disposed to any banktop panorama. 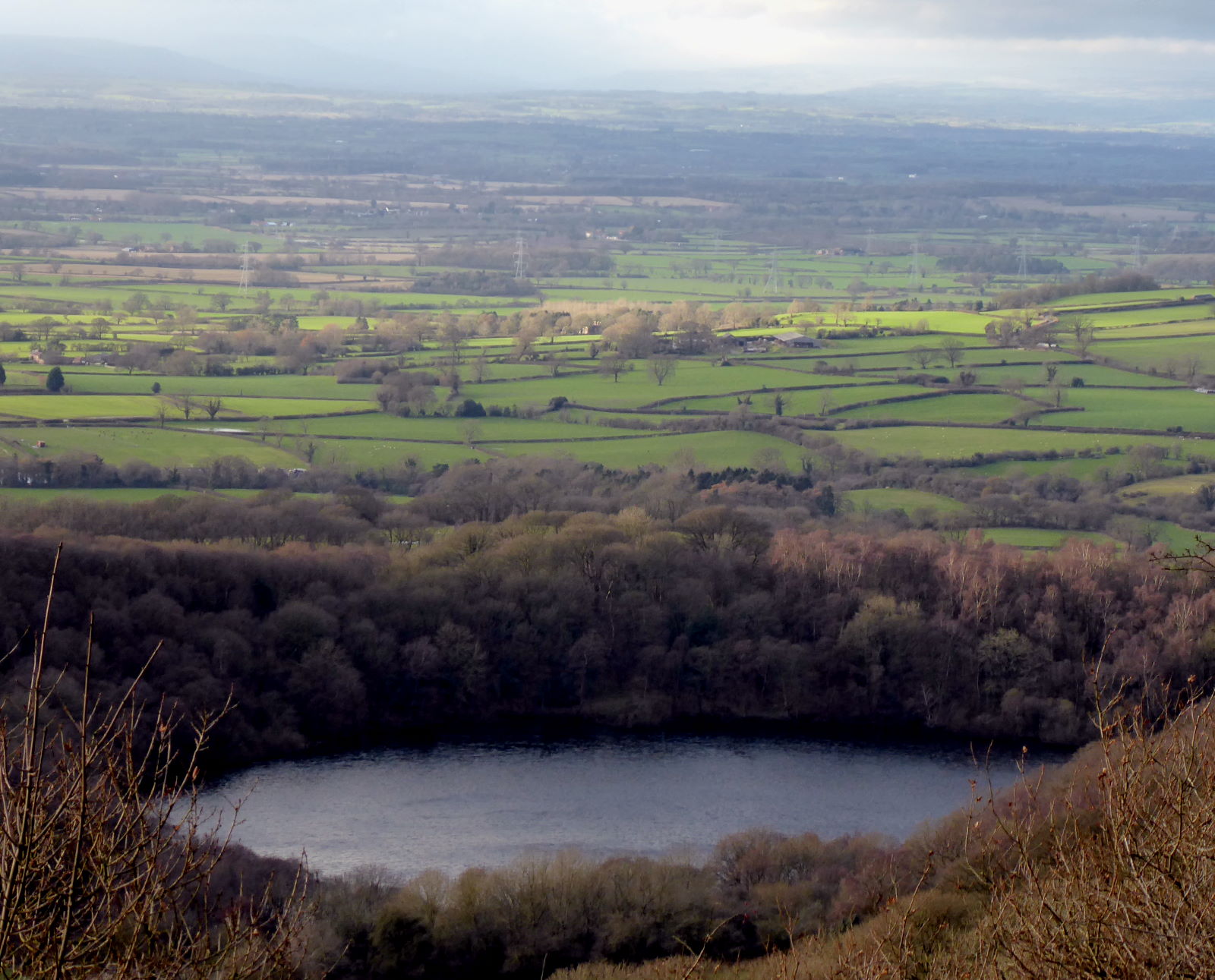 From here you get a good view down over Gormire (pic), Yorkshire’s fourth-largest natural lake. (The first three are Malham Tarn, Hornsea Mere and Semerwater.)

I fancied walking round it, so I rode down a bridleway to the footpath that loops round its shores. I left my bike – I didn’t need to lean it against anything, it just stood up by itself in the deep mud – and walked to the water’s edge. It’s apparently one of the best-rated places for wild swimming in England, peaceful and lush in summer, though on this wintry day it was as gloomy and uninviting as its name suggests. Gormire is also Yorkshire’s leechiest lake of any sort, so skinny dippers beware. 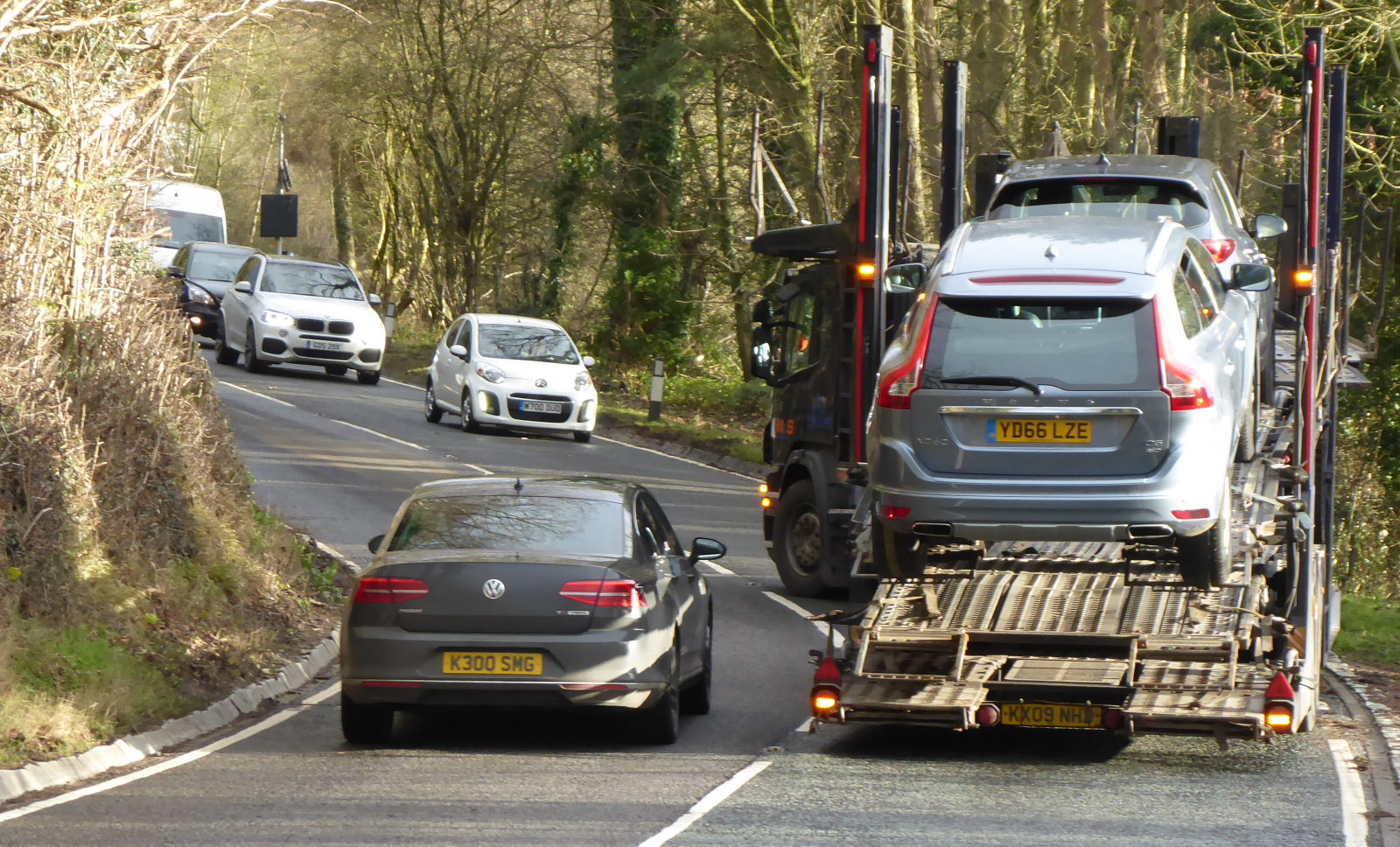 Hurtling down the 1 in 4 / 25% gradient that defines the A170 as it scrambles its way up Sutton Bank, I saw another of the area’s best-known phenomena. An HGV transporting cars had disastrously overestimated his engine’s ability to cope with the hill, and had stopped a short distance up it. Unable to turn round, he had to reverse down on the other side of the road (pic) to concoct his satnav-blaming excuse back in a lay-by on the flat. 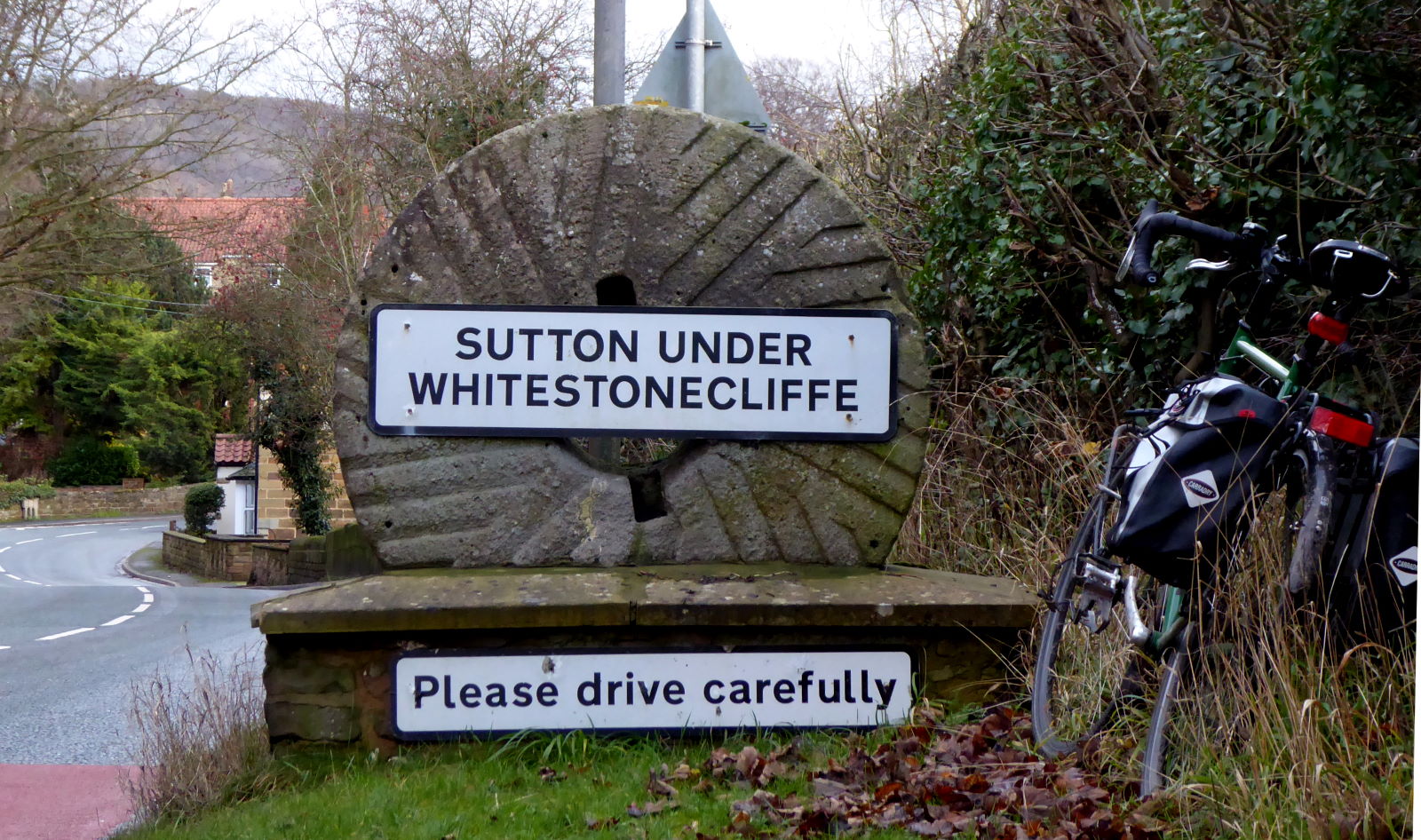 The last sight on this eventful trip was the village of Sutton-under-Whitestonecliffe, a mile or two away. Write it with hyphens (as the signs clearly don’t) and it becomes the longest single place name in England, longer than Cottonhopeburnsfoot in Northumberland, though not obviously as long as Llanfairpwllgwyngyllgogerychwyrndrobwllllantysiliogogogoch.

Well, not quite the last sight of the day. Or the best. That was the cream doughnut that I had from Thomas the Baker’s in Thirsk, awaiting my train home.