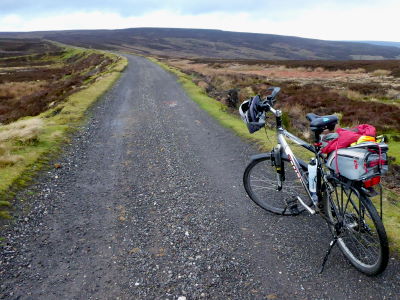 Ever since I was much younger – about 50, say – I’ve wanted to cycle along Rudland Rigg. The unsealed, but decently-surfaced, old track runs ten miles north-north-west over the North York Moors. Drovers used it to shuttle cows and sheep to market, between Kirkbymoorside and Stokesley. I too had a lumbering and fattened-up beast to control: my trekking bike. 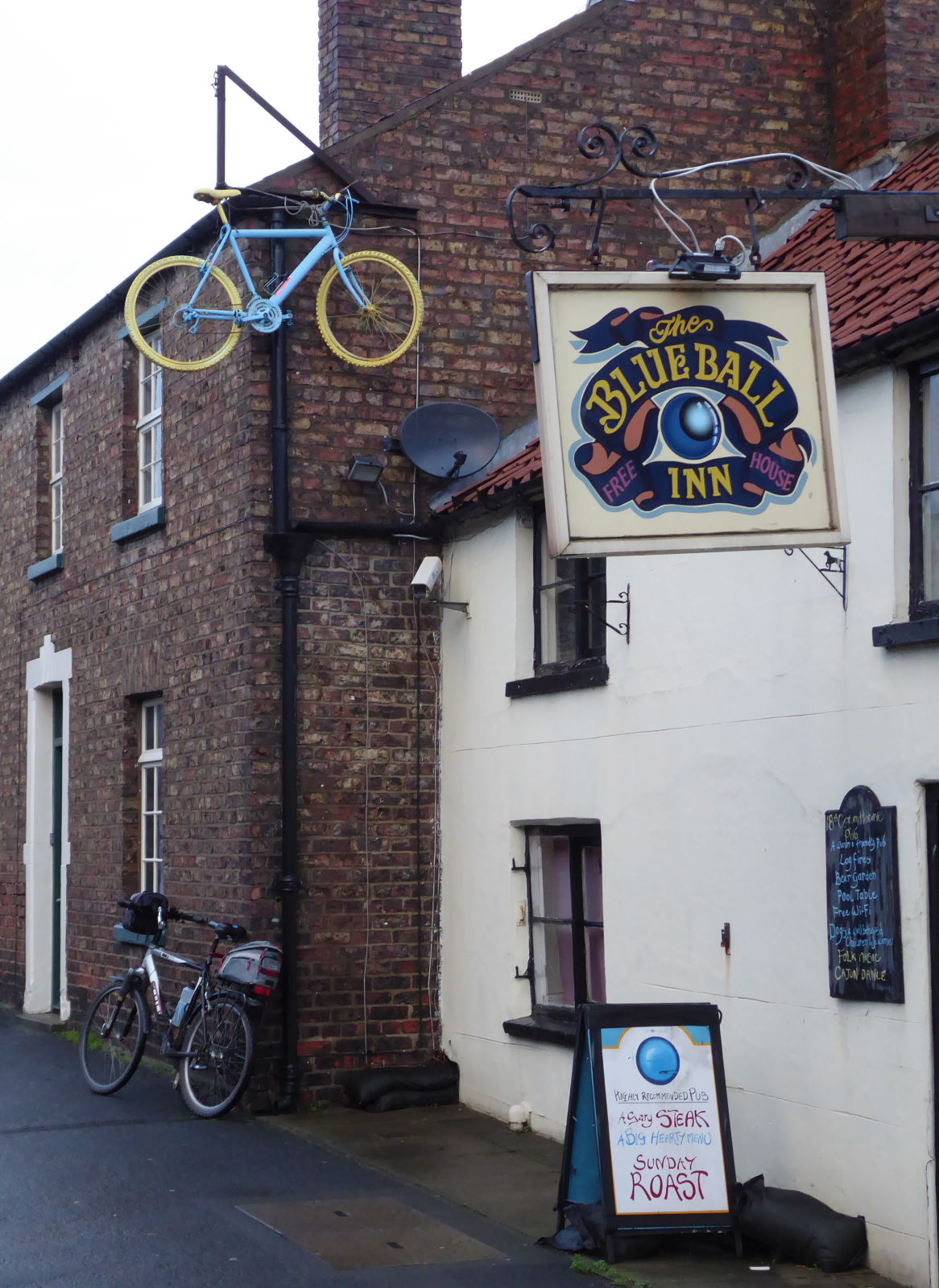 I got a morning train to Malton and cycled north from there. Malton is a great town for artisan food, but a rubbish town for bike parking (pic).

Gliding alongside the River Seven, a watercourse that sounds like a wrongly convicted group, I slid through a Christmassy Kirkbymoorside and took some back roads up to the start of the Rigg just north of Fadmoor. 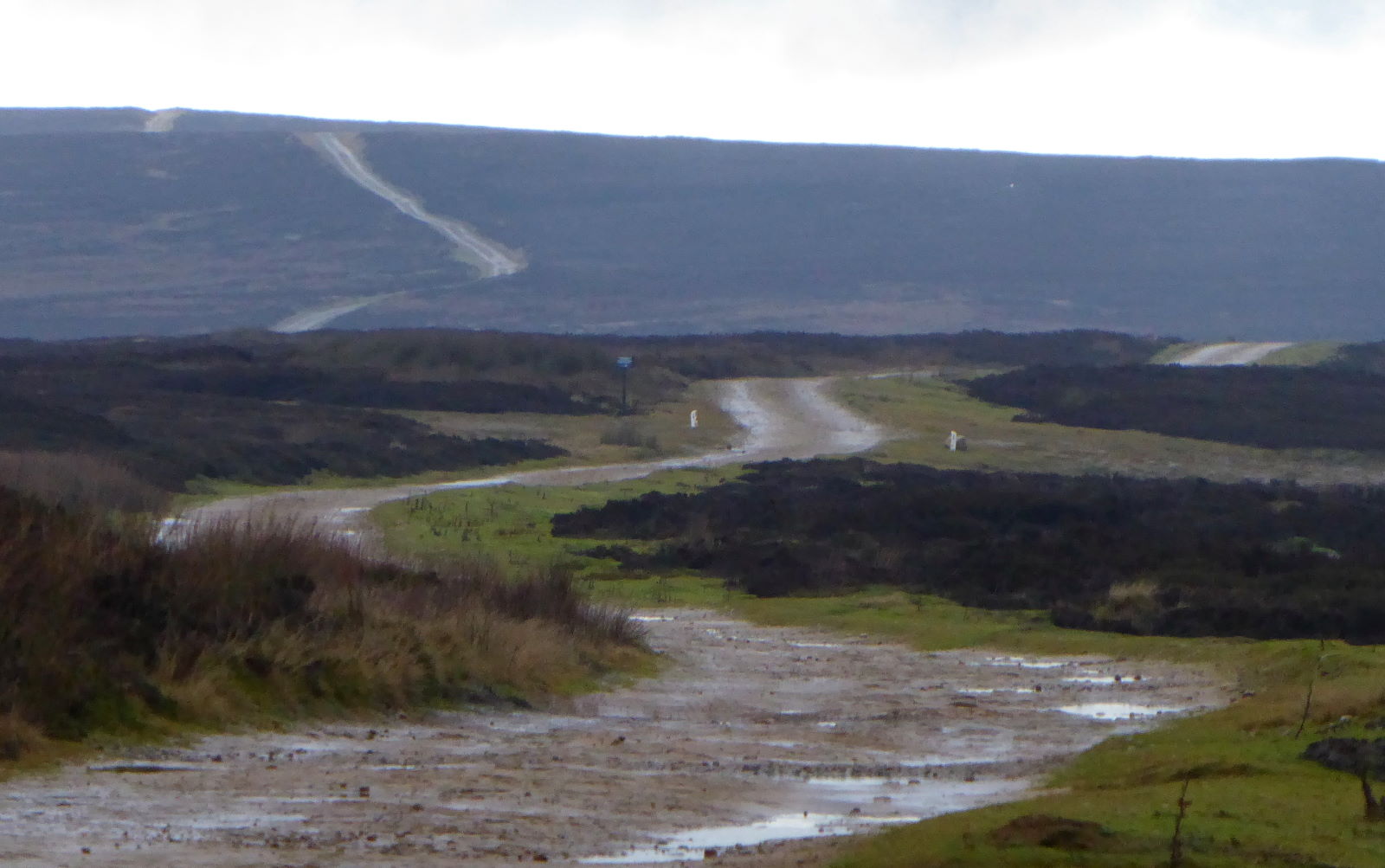 Rudland Rigg looks straight on the map but snakes a bit (pic). Which reminded me: the area is rife with adders in summer, but this was a chilly winter day, so no need to have the air ambulance on speed dial.

The Rigg is one of Britain’s best-known motorable tracks for offroaders. They’re the enthusiasts who drive (a) 4×4 vehicles along ‘green lanes’ and (b) quite a few other people mad, because they’re not such green lanes afterwards.

The Rigg is pretty robust, though, and still in good MTB-able nick. There were fewer puddles than I expected, too, which was just as well: the sunny forecast bore little resemblance to the swirlingly cloudy, if dry, reality. 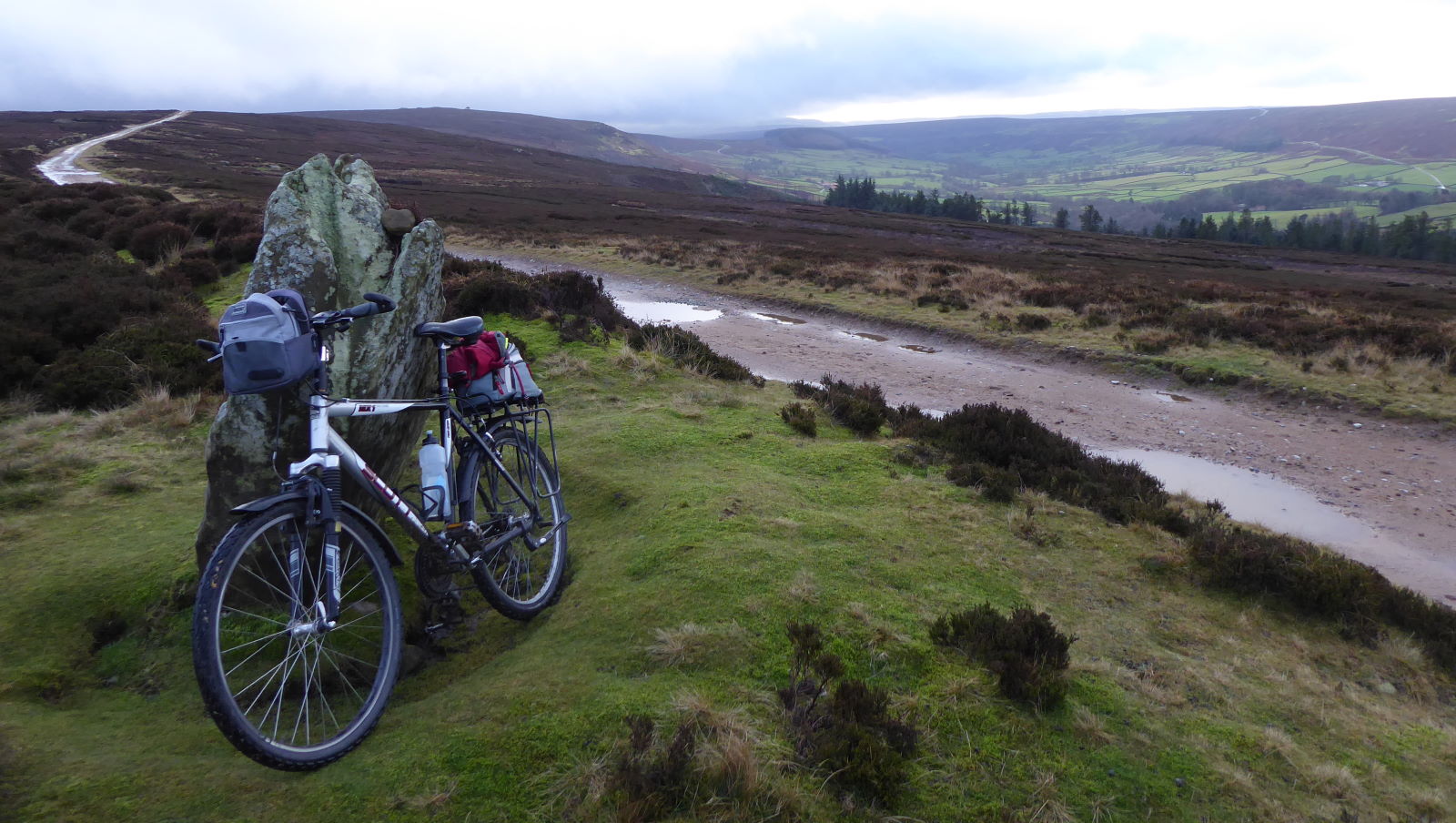 However, on this chilly morning, there was no-one to be seen, and I had the whole track to myself. Social distancing was not a problem.

The very northern end of the Rigg is a steep and rocky hairpin descent down off the moortop, notorious among offroad drivers, who like to post YouTube videos of their attempts to manoeuvre down it. Rough, poorly-maintained, and very heavy going, the videos can be given a miss.

However, I didn’t quite go that far. I turned right off the Rigg at Bloworth Crossing, to take the old mining railway track that meanders along the contours east (pic) and south to Blakey Ridge. It’s flat, and almost all a decent surface of fine black gravel.

I walked this bit as part of the Coast to Coast in 2012, but on foot it’s a long, samey slog, whereas on a bike it’s just a breeze. Most of which was a headwind. 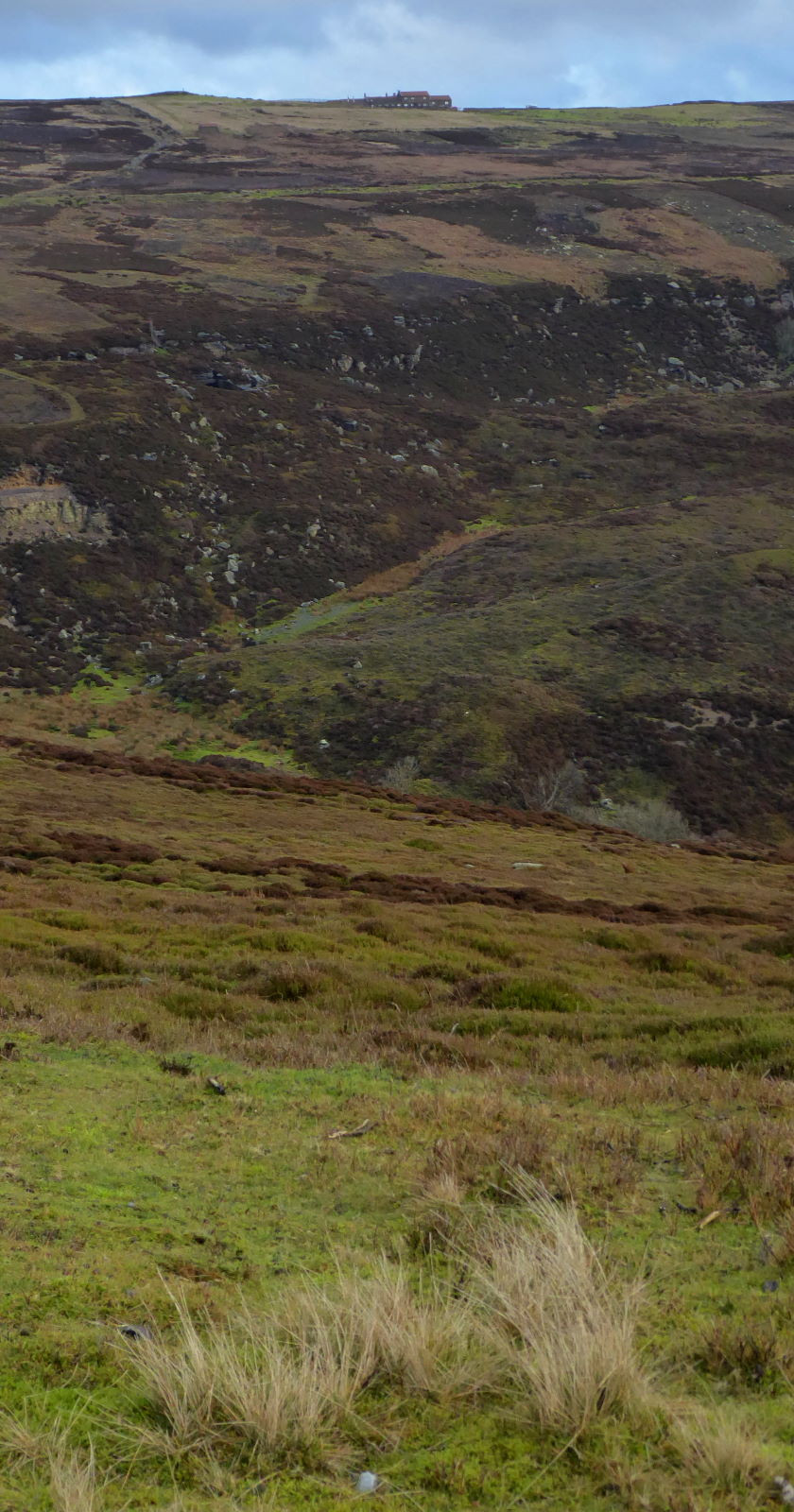 The Lion Inn is spectacularly situated at the top of the ridge (pic).

It was open, but the only way I’d get a pint would have been with a substantial meal, and it was a bit early for that. The meal, I mean.

Besides, I had a pork pie, provisioned from Thomas the Baker in Malton this morning… 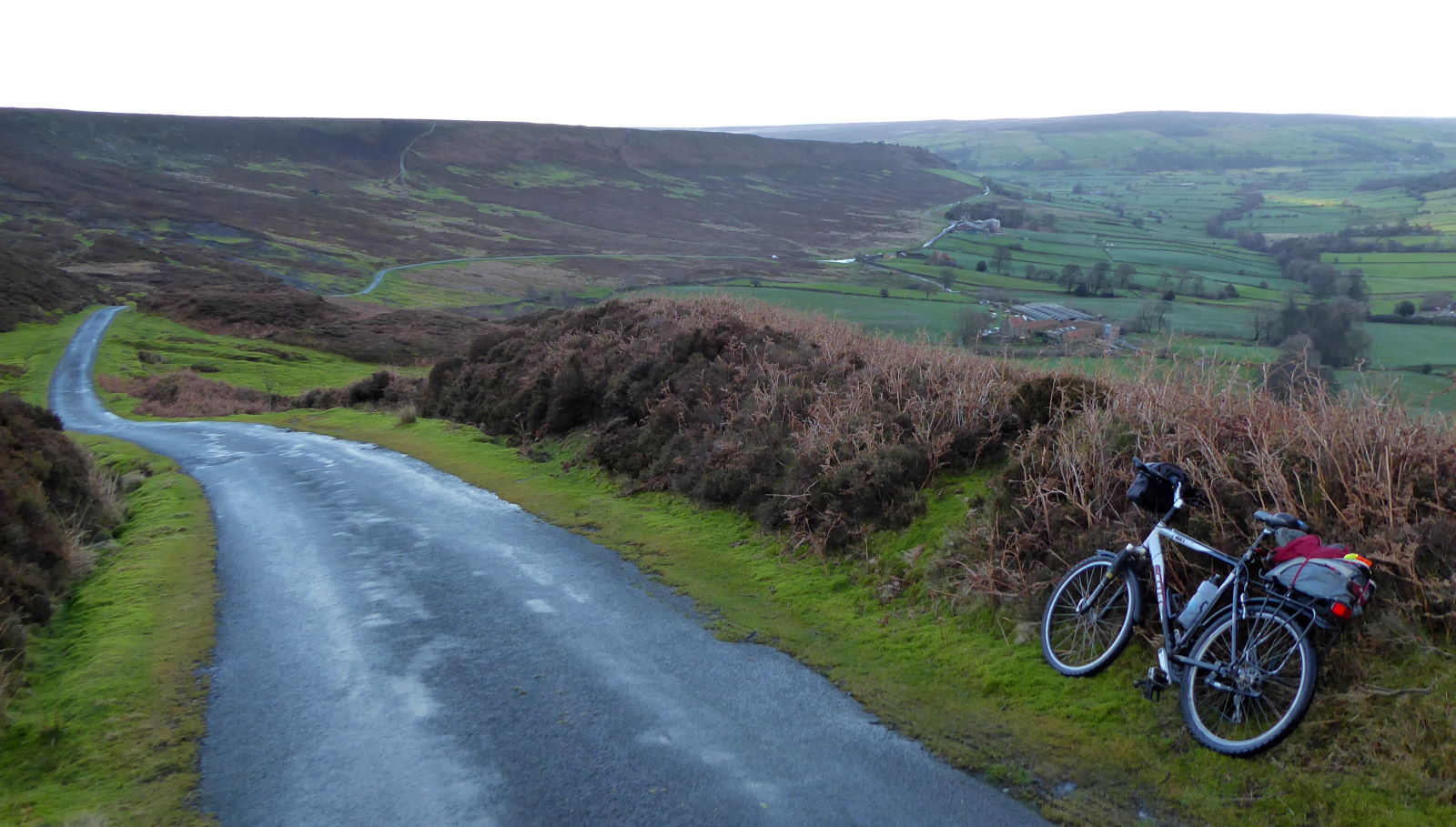 From Rosedale Head there’s a spectacular single-track back lane that rushes joyously downhill to Fryup Dale (pic). I was heading here partly to investigate the Hub Cafe in the dale, a bike workshop and cycle cafe that must be one of the most gloriously-vistaed in the country, but mainly… 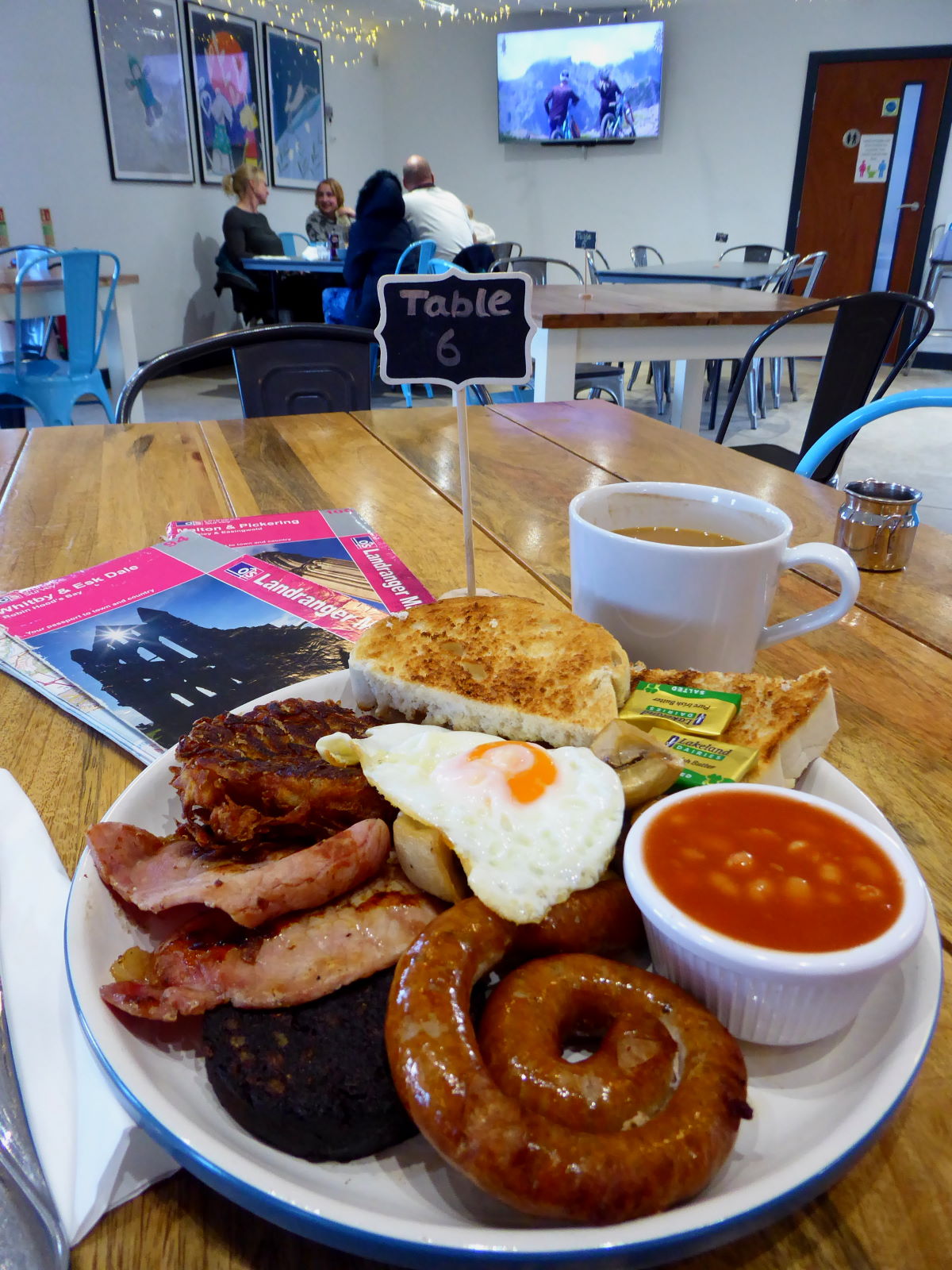 …I couldn’t resist having a fryup in Fryup (pic). This all-day breakfast is, of course, a Hub speciality. I didn’t go hungry after this lot. In fact I didn’t go anywhere for three-quarters an hour. I was too full.

Eventually I made my way in the winter dusk to Castleton, whose Co-op came up with a couple of beers to quicken my long, dark and tedious train journey home.

I’d have preferred a pint or two in a Moors pub, but after that mighty afternoon breakfast, I couldn’t have faced another substantial meal to enable a drink, however thirsty I was.