Mizen Head (pic) isn’t actually the southernmost point in Ireland – that’s Brow Head, a couple of miles east – but it’s the traditional End Point of the island, so that’s where I was going to start. But first I had to get there. (I’m not a multitasker; I work linearly.)

My ferry docked in Dublin in the grey, cool, misty dawn. Cycling off the ferry into a new country is one of my favourite experiences, though this was among the less inspiring: a hemmed-in lorryway in a dreary concrete wasteland. A leprous, intermittent cycle lane got me, with a tussle, to the banks of the Liffey and into the damp, deserted city centre, heading for Heuston station.

Heuston, we have a problem: the booking office was closed. Ah, but only because it was barely 6am: ferry-lag had confused my body clock. At half six it opened, and I shared the train with smart but bleary business types, and one other cyclist. He had a bike trailer, and Greenpeace stickers, and nail varnish, and kinky boots, and a shaved head, and stretched lobes, and a coat that looked like a dress.

I hoped he wasn’t going to commit a murder or anything. I’m not very good at picking people out in an identification parade.

I dozed most of the way to Cork. From here I wanted a bus to as near as I could get to Mizen Head. I could get to Goleen, 7 miles away, but the next one was tomorrow. So I got the 10.30 to Bantry: it’s 27 miles from Mizen Head, and irritatingly I’d be cycling back that way. But I wanted to get going.

I got to Bantry about 12.15 and climbed out of the town, reminiscing about the last time I was here, in August 2000. It was a very uncertain time in my life, with no job, no income and no prospects: just me with my cheap second-hand light green Raleigh touring bike.

Things were better now. I still had no job, no income and no prospects, but I had a cheap new light green Raleigh touring bike.

The weather hadn’t changed since 2000 though. It was still raining. A clammy mist blurred everything, turning the Emerald Isle bathwater grey. I saw someone riding a horse, not for leisure but as local transport, at Ballydehob. Perhaps you can go through deeper puddles than in a car.

At Goleen, immortalised in a Dolly Parton song, I lunched on cream crackers, salami and cheese, and watched four shotgun-toting soldiers in camouflage guard some sort of bank delivery, to the bemusement of some tourists. 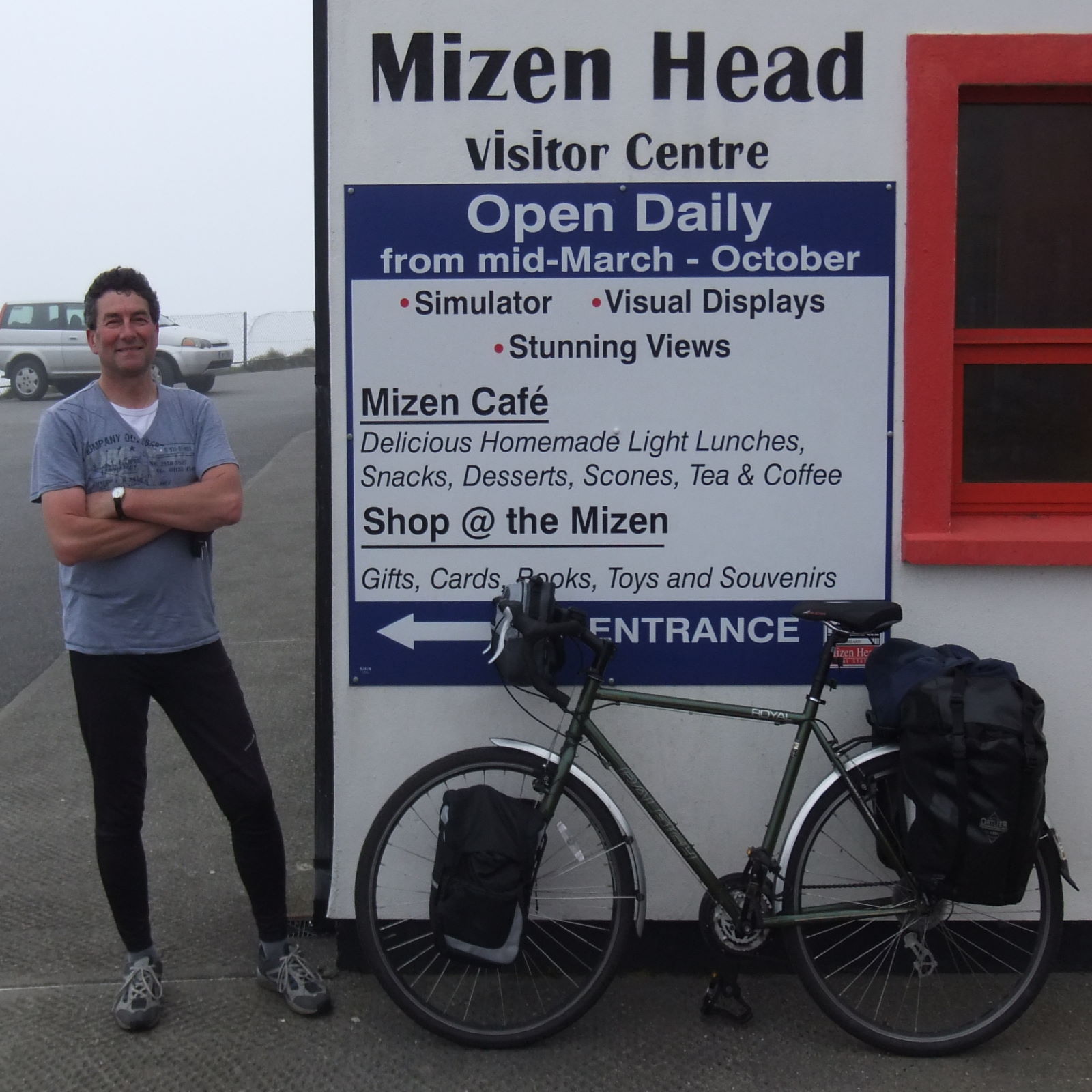 A headwind had been taunting me since Bantry. As I slogged down the narrowing roads to Mizen Head the visibility lessened even more.

Through my misty, wet glasses I glimpsed Barleycove beach down on my left, and followed a car-free road past fields and cows to Mizen Head’s visitor centre (pic).

At least I think it was car-free. Maybe I just couldn’t see them. 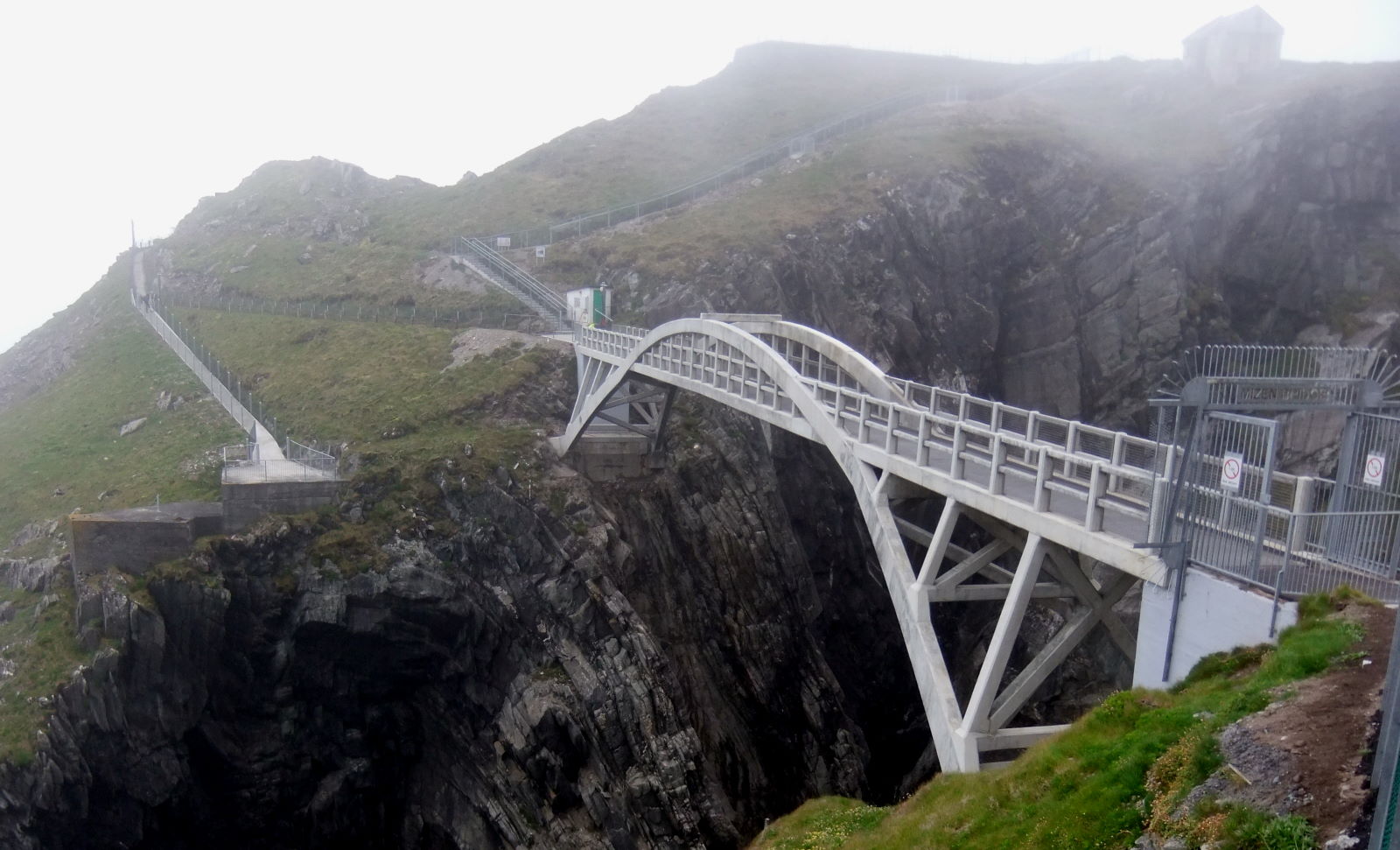 From the visitor centre there’s a walkway to a grand bridge across the gorge (pic) to the near-island at the end of the Head. It has a lighthouse, weather station, and old signal station which is now a museum celebrating Guglielmo Marconi’s work here on transatlantic communication.

Fittingly, an American chap checked my ticket. He seemed part of a three-man team whose job it was to stand around talking about paint. 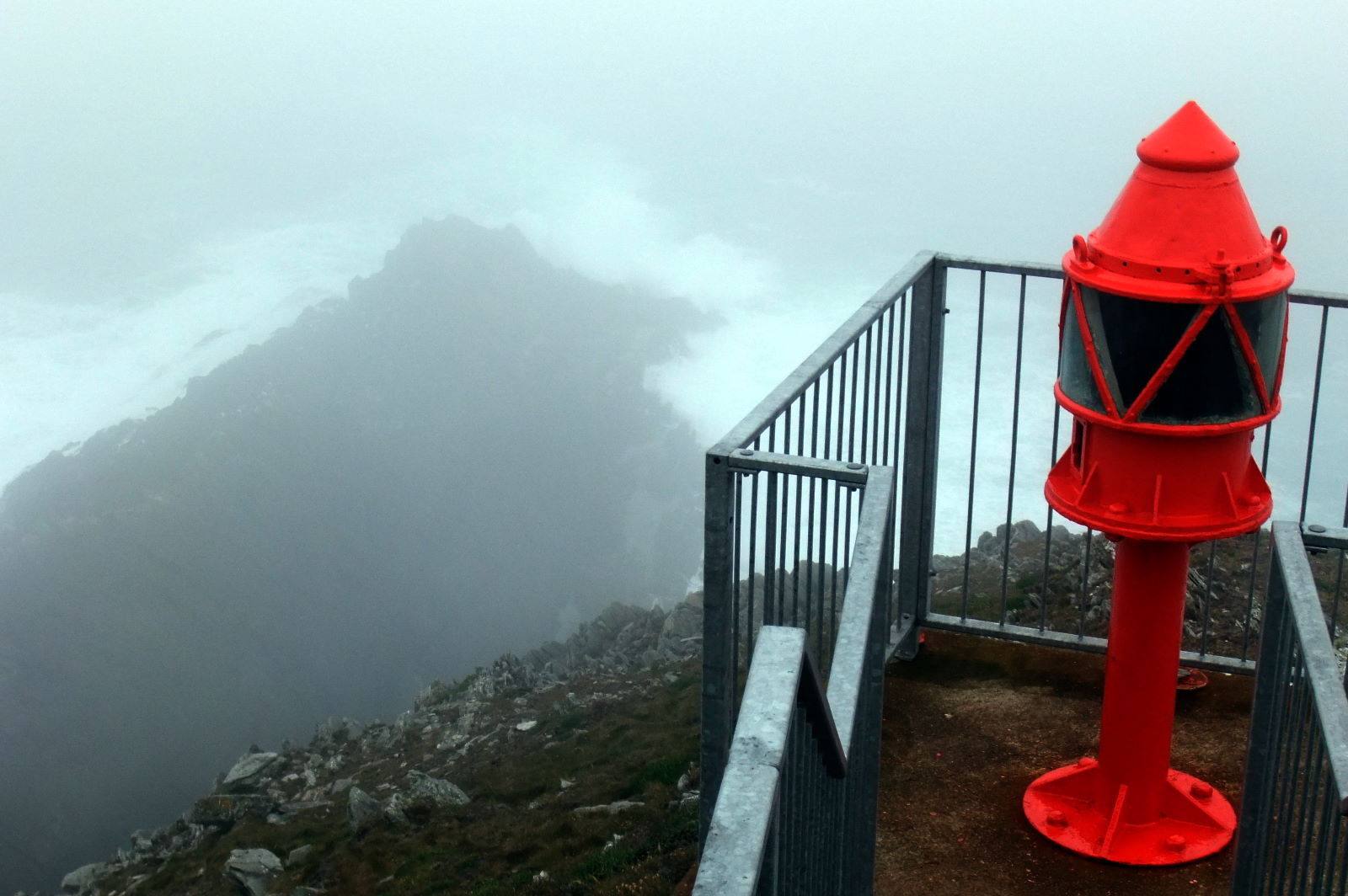 From the viewpoint (pic) I got a stupendous view of the fog.

Now, at last, the trip could start. Thanks to the now-tailwind, I hurtled back to Bantry through Goleen, through Ballydehob, through the same banks of mist I’d groped through on the way out, but seen now from the opposite direction.

It was half seven when I got there, tired and aching. What I wanted was a pint in the charming old shopfront bar I remembered from my last visit, but I didn’t have time: I needed to be at my Glengarriff hostel before dark. 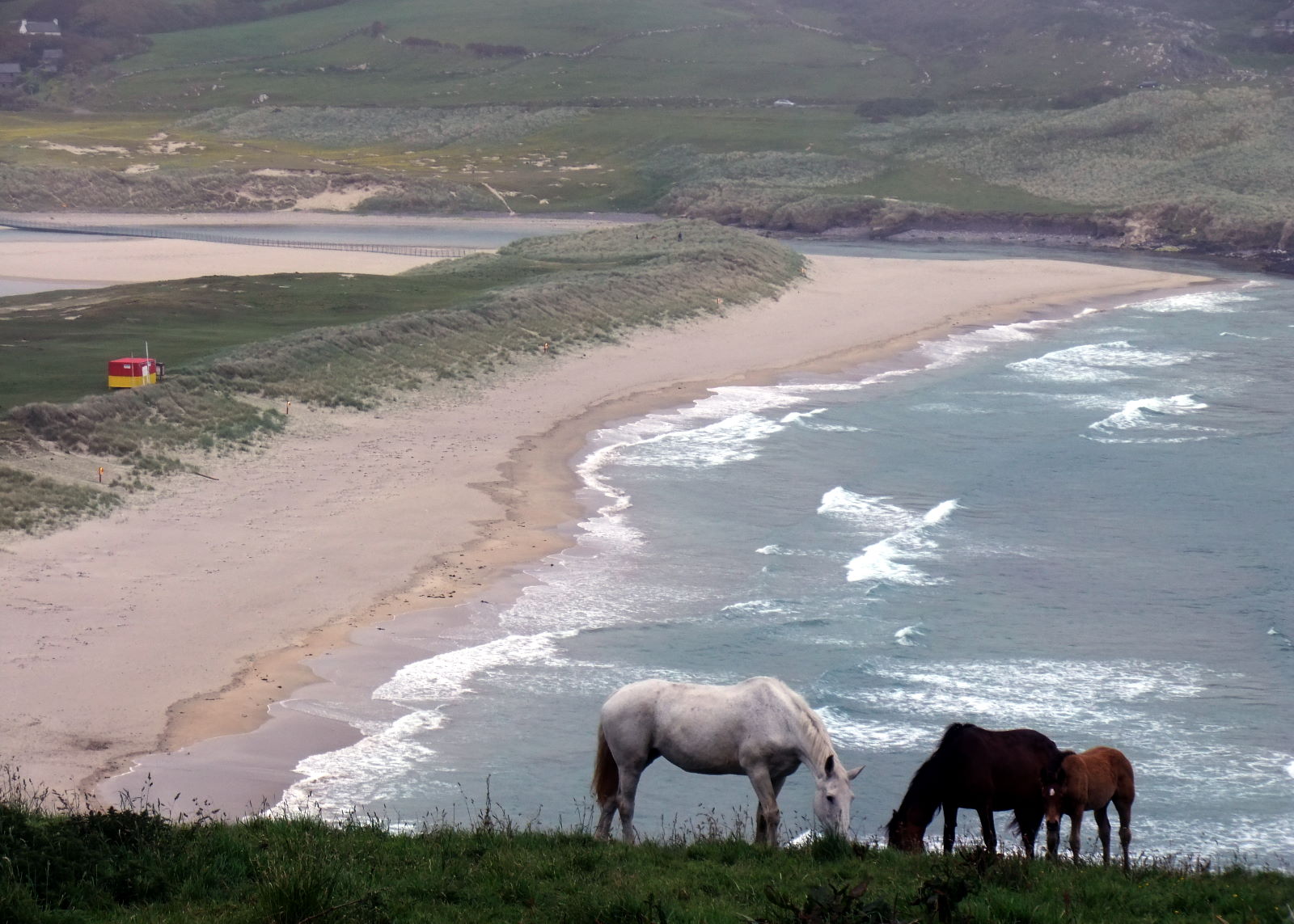 The mist began to clear a little (pic), and I did get a glimpse of things such as my handlebars, and the road surface beneath me. At last, with a mile or two downhill, I rolled, knackered, into Glengarriff. 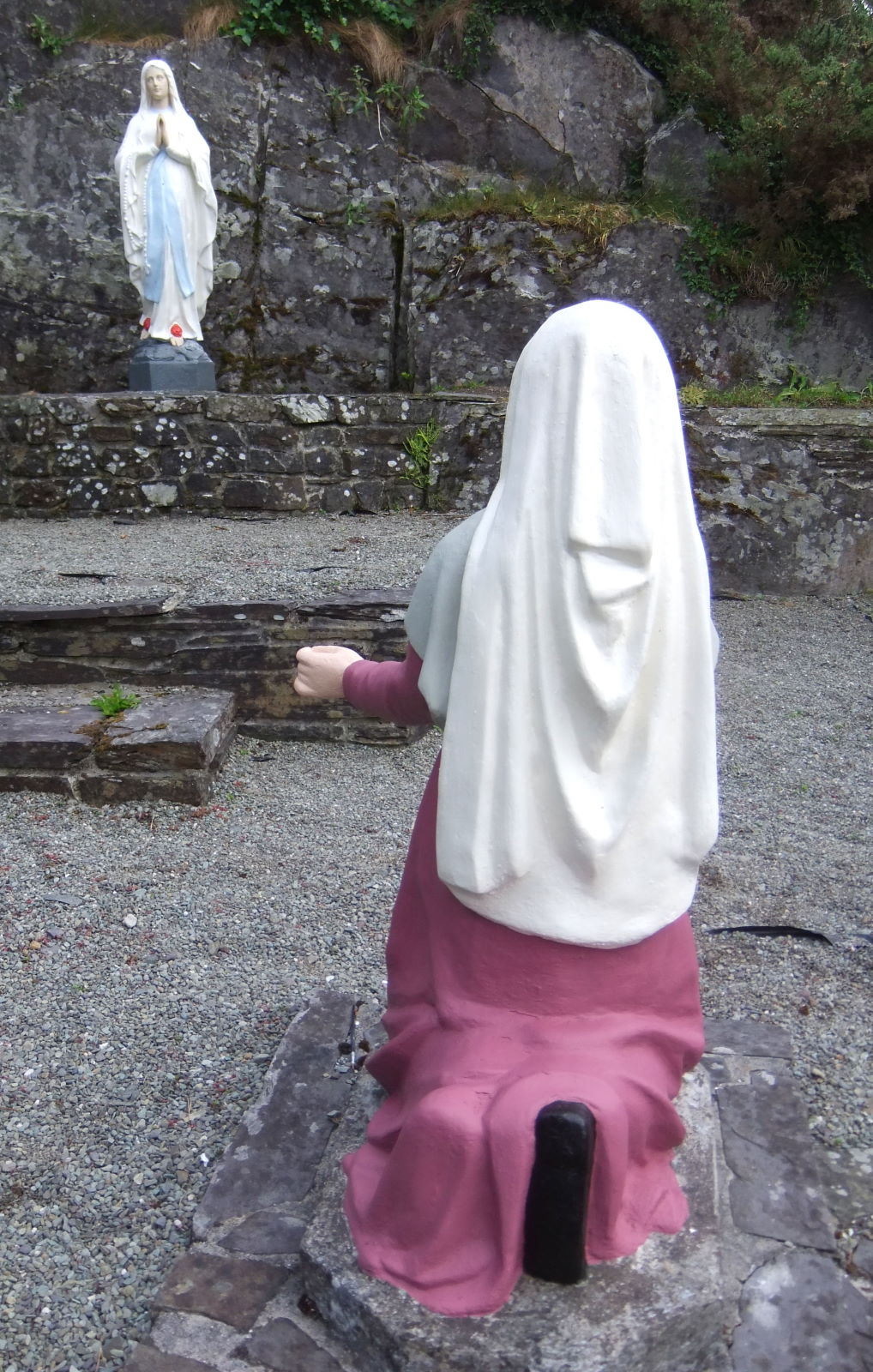 I stopped at this roadside shrine. To date, my prayer has not been answered, but it has reminded me of the old joke: I asked the Lord for a new bike but I never got one. So instead I stole one, and asked for forgiveness.

Phew; now I could relax. I lugged my panniers up to the room, thinking I was either stronger than I remembered or they were lighter than I expected, and unpacked. Time for a shower and change of clothes.

Ah. As I laid out my T-shirts, underpants and socks, I realised there weren’t any. Somehow, back in York, I’d completely forgotten to pack them.

Oh. I had swimming trunks, goggles, two sunhats, a woolly hat, gloves and a scarf, but no change of clothes.

Hmm. I was already wearing all the garments I had that could prevent me being arrested. And, not unimportantly, had been for two sweaty days. So, like, er… what to do?

I needed space to think; an idea of how to tackle this. So I went to the pub across the street and have a couple of pints of Murphy’s.

No, that wasn’t the space to think. That was the idea.