What could be more bracing than a cold shower in the morning? Now I know: it’s putting on yesterday’s washing that’s still wet, thanks to having forgotten to pack spare clothing. Still, once I’d got over that, I could get on my bike and get going.

Except I couldn’t. My back tyre was flat, the result of a mysterious overnight puncture. Last night, hard as an Iranian police cell mattress. This morning, limp as a royal handshake. By the time I’d fixed it, and spent twenty minutes inflating it with my pump that would have struggled to fill a birthday balloon, it was nearly eleven. 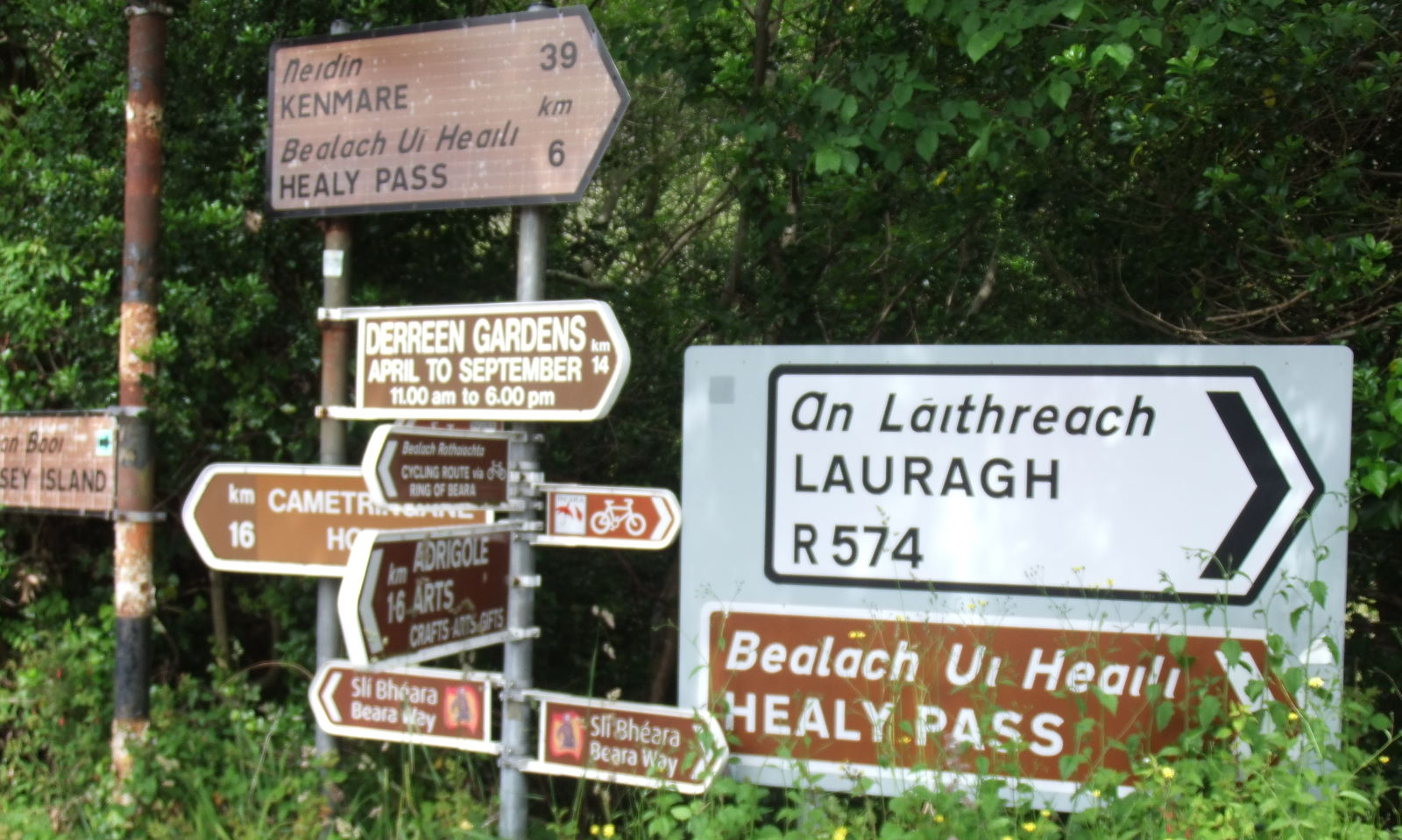 But, as I cursed the cyclist’s devil who sneaks thorns and shards of glass into your tyres while you sleep, the sun began to come out, and I could enjoy the Ring of Beara’s coast road to Adrigole.

At a junction with enough signs to warrant its own ISBN number (pic), I slipped off up the road to Healy Pass, a charming, near-singletrack, old-style winding country affair. It was a gradual gradient all the way, getting wigglier as we neared the summit.
A farmer chatted to me amiably when I stopped for a sandwich, a bachelor with dodgy teeth and a stuttery tendency to ask the same question several times. There was something of an inquisition about my family, so I told the truth, that I had married my childhood sweetheart at 18, and now had three grandchildren. It was just someone else’s truth, not mine. 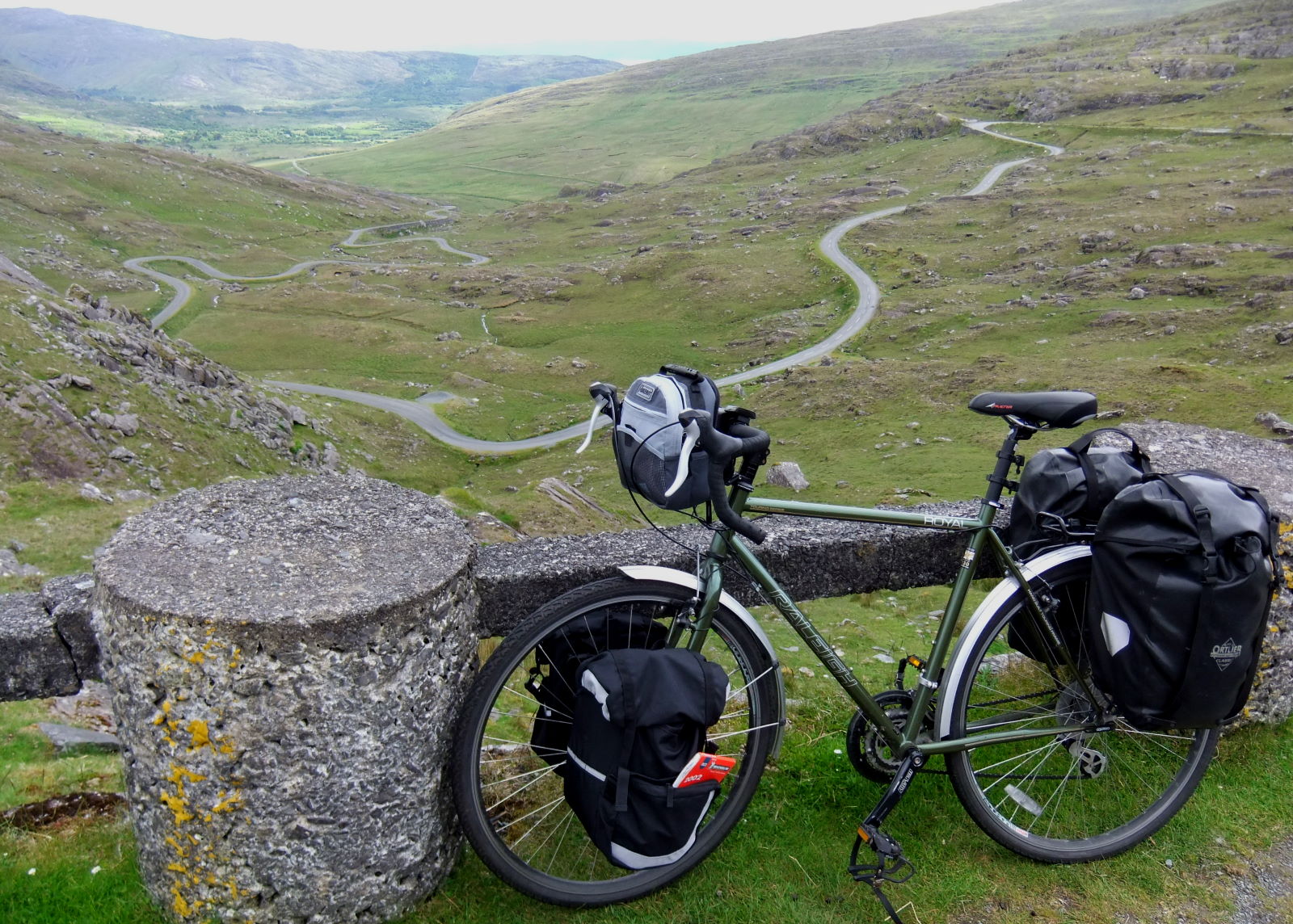 The scenery was rather fab, very reminiscent of my 50th birthday present to myself last year: Cow Pass, Britain’s longest steep hill, vaulting its way from Lochcarron to Applecross in Scotland. The view back down from top of Healy Pass (pic) was similar: a tarmac squiggle, as if one of my nonexistent grandchildren had scribbled on the map with a road-coloured crayon. 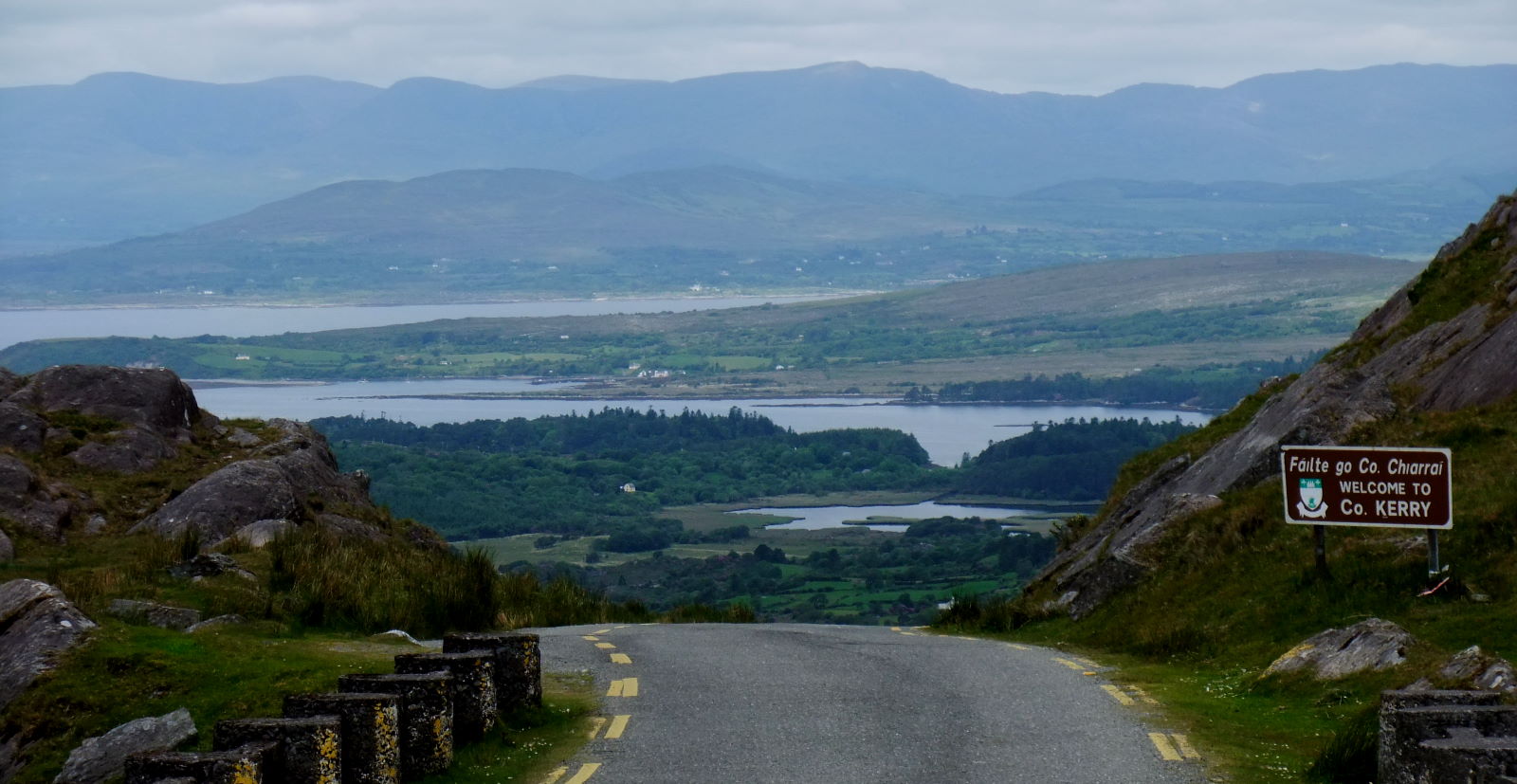 I lunched at the top, looking down to the lush, lakey Kerry side. Now it was a long whoop downhill (pic) to the coast road. It was all quite beautiful: a quayside pub, lush tropical-ish vegetation, verdant greens, vivid flowers of wild purple, yellow, pink, blue, indigo. 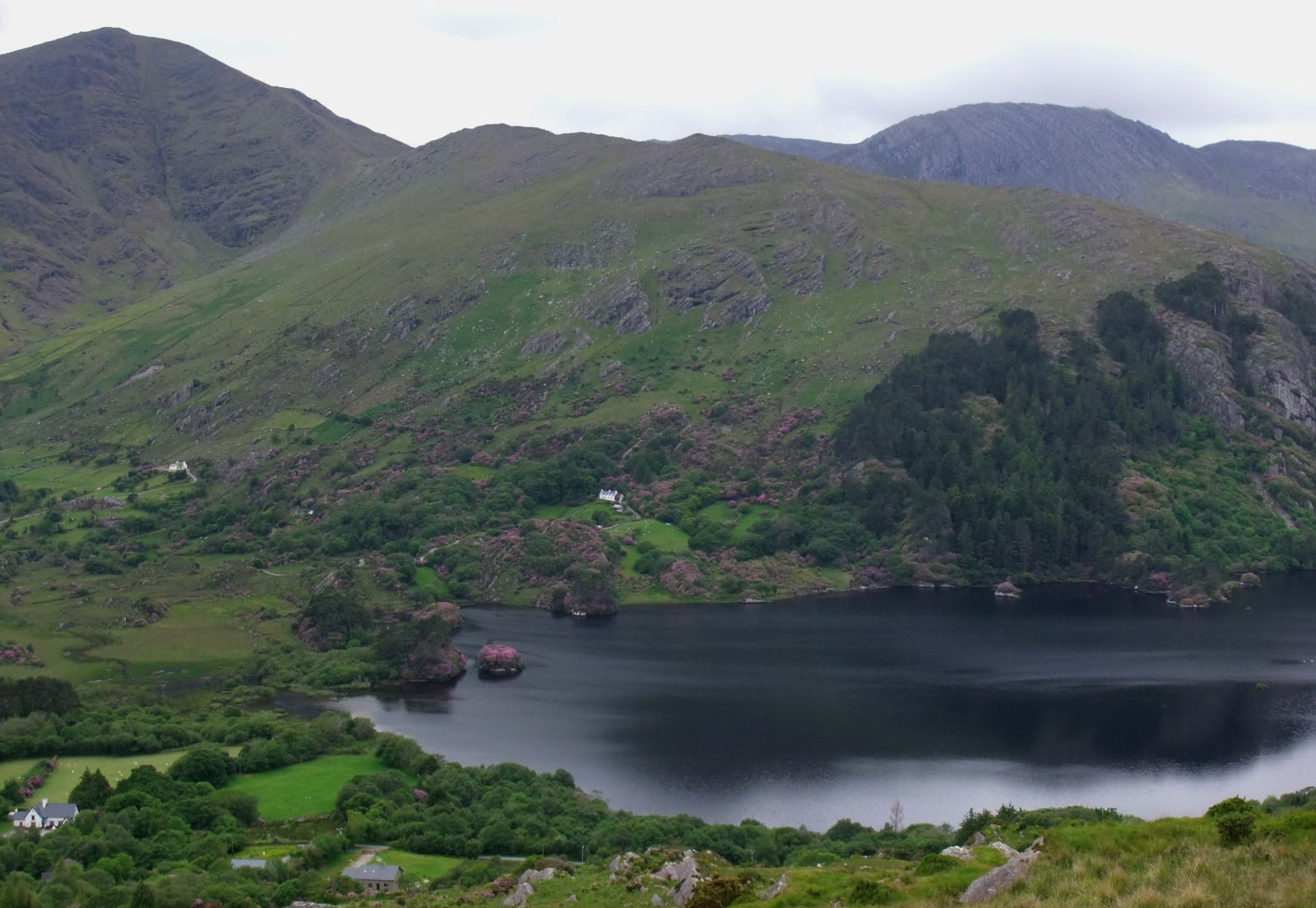 Things were lovely along the coast, and a narrow lane ambled into the woods with rich green vegetation spilling out from both sides and fine views (pic).

It reminded me of New Zealand, except I had a change of clothes with me in New Zealand. A final smooth few miles along the main road took me into Kenmare over the bridge.

A short day, but I had things to do, especially now a second puncture on the back wheel had revealed itself: buy a new back tyre. And underpants. I wasn’t sure which was more vital. 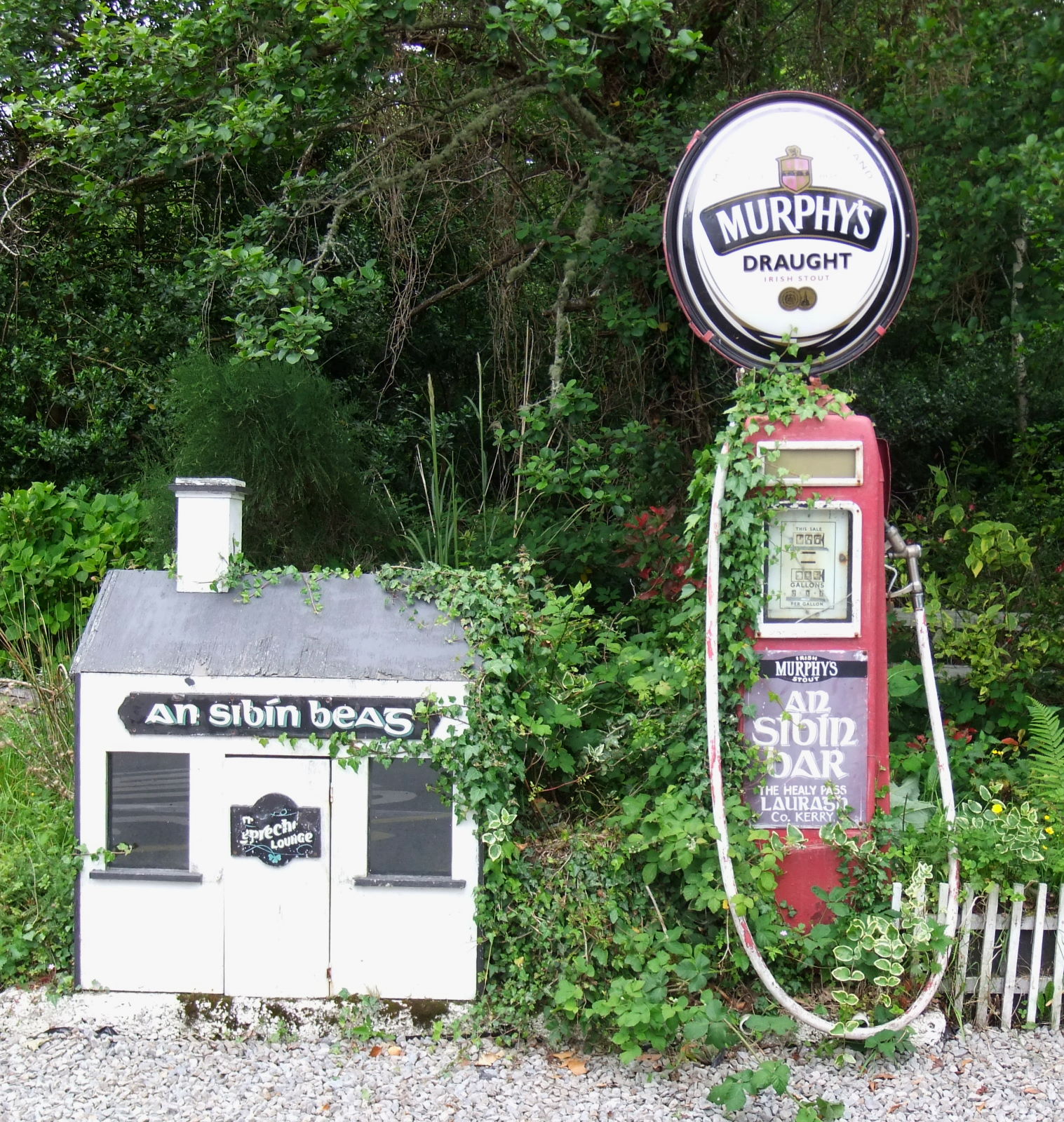 I found what I needed in the town, but crumbs, it wasn’t cheap. No Peacocks or Matalan here. The cheapest non-racist T-shirt I could find was a mighty €17, pair of underpants €9, and socks an astounding €14.

How can one sock cost as much as a Cuban doctor earns in a week? Or a cycling writer earns in a day? Were they imported individually by helicopter? Anything might be possible in a country which apparently dispenses beer from petrol pumps, and where they have pubs for leprechauns* (pic).

I found a tyre for a relatively trifling 17 euros, a Schwalbe with puncture protection, from Finnegan’s the sell-all shop. I checked in to the hostel opposite, armed with a pizza and bottle of wine from the supermarket down the road, and had a pleasant evening chat to my inmates, two late-50s Irish guys.

Jack and Andy had lots of good stories to tell; we drank wine, ate, laughed, and they lent me a track pump. A curious possession, as they were bikeless, in a 4×4. But in Ireland this sort of thing happens.