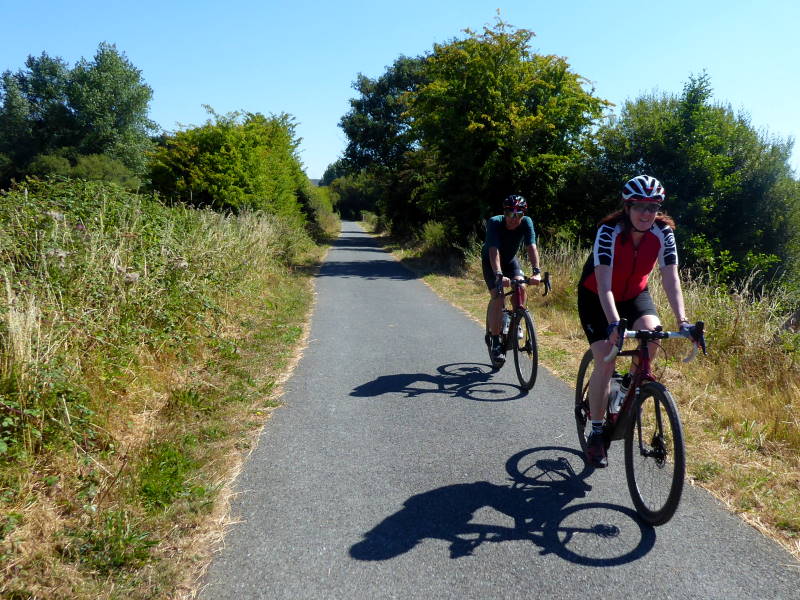 No wonder, in this era of neoliberal capitalism, red squirrels are struggling. Their old ways of social equality and communally-owned hazelnuts have been pushed aside by the aggressive, exploitative, money-making urgency of the greys.

However, on the Isle of Wight, like amiable old lefties with control of some niche council, the reds still cling on. I suspect your chances of glimpsing one on the Red Squirrel Trail are small, though: I saw none.

The Red Squirrel Trail (RST) is touted as the Isle of Wight’s family-friendly ride. It’s mostly offroad, and runs 35 miles or so from Cowes down to the southeastern beaches of Sandown and Shanklin and back. Surface varies from good tarmac to mediocre gravel to frankly awful bridleway, but it’s a decent day on the bike.

I had to use the floating bridge again in the morning to reach the west side of the River Medina in Cowes, joining the start of the RST in town. It’s a good, smooth, paved railtrail for six miles, after which it’s a few miles of gravelly stuff.

I rubbed shoulders with plenty of cyclists and a few horses, which meant there was a bit of a smell, but the horses didn’t mind about me too much.

After some tracks across farmland – hot and continental-feeling on this cloudless day – the route splits into a grand loop; you can take either direction, though clockwise seems the expected way. The one you prefer depends whether you’re conditioned by watching your sundial in the northern or southern hemisphere, I suppose.

The last few miles into Sandown are on nicely paved railtrails. I stopped off for an ice-cream at Pedallers Cafe, right on the RST, but the queue was so long I thought I’d be in Sandown quicker. From there to Shanklin the ride goes all the way along the prom, past beach-huts and alongside the sands. It was all packed today with families enjoying the costa-like weather, and the queues for ice-cream were so long I thought I’d be in Ventnor quicker.

So I departed from the RST and rode alongside Ventnor’s crowded sands, passing more long queues for refreshment, until I got to the end, and the Spyglass Inn. With ice-cream possibilities exhausted, there was no option but to have a beer on their terrace overlooking the beach.

I checked out the historic landslip that has cut the old main road west in two, making it much more pleasant for cycling now that only local residents use it, before heading back north to rejoin the RST at Wroxall.

The few kilometres of the RST either side of Godshill are terrible: a field bridleway that was brickyard-bumpy today and will be bog-muddy in rain, and some awful rough stony tracks that had me cursing. Then it was, a little anti-climactically, back along the way I’d come to Newport, and back to my campsite.

So, Red Squirrel Trail verdict: some parts sweet as a nut, other parts tough to crack. There are friendly signs on some stretches alerting you to the nature en route – bird calls, trees, likely insects – but don’t count on seeing anything red except, in weather like today’s, cyclists who neglected to put the suncream on.