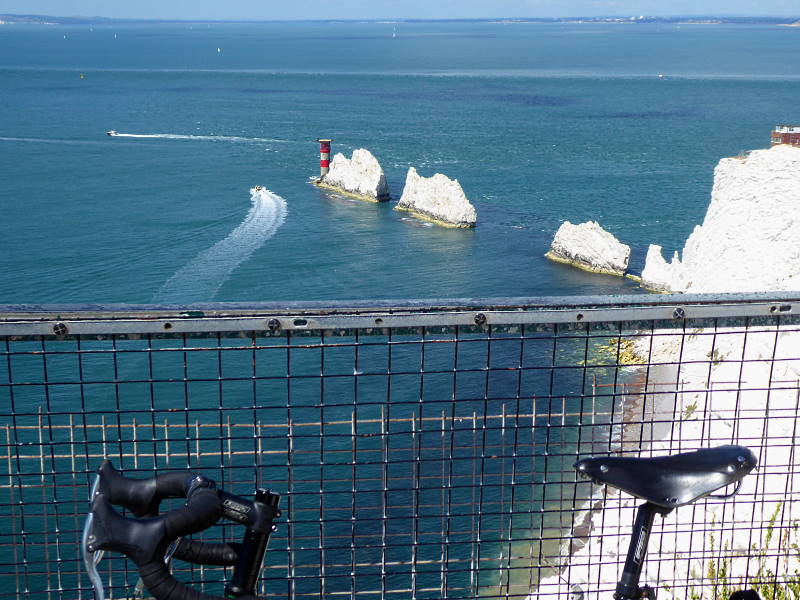 The round-the-island cycle route is the keynote bike ride of the diamond-shaped island off the south coast. And it is indeed a gem. Because it’s got many faces. And it’s hard. It’s sixty-odd miles of ups and down giving some splendid views and scenery along the way, but it also misses a trick or two if you ask me. Which they obviously didn’t.

I arrived on the fast cat ferry from Portsmouth and camped at a farm site outside Ryde. It’s the IoW’s largest town, famous for its historic wooden-planked pier out to the ferry terminal. It’s just a shame there are no puns on, say, popular song titles about the expensive ticket there.

The route is pretty well signed, with two patterns. Blue bikes on a white island denote anti-clockwise; white bikes on a blue island clockwise. This is easy to remember with the mnemonic BBOWIACWBOBIC.

I did the route anti-clockwise, to benefit from the prevailing westerlies for the long eastward stretch across the south coast of the island. Another ferry – well, the ‘floating bridge’ – got me across the River Medina in boaty town Cowes, another place name that sadly has little potential for amusing puns.

Sunny lanes cut inland, past the historic Old Town Hall in Newtown, which was relatively new (it replaced an older one) but still quite old, though not as new as it looks. Confused by this, I rook the rather rubbly railtrail from Yarmouth went down towards Freshwater. From there the standard route heads east, but I wanted to see the iconic view of the island: the Needles.

The chalky stacks can be well viewed by bike. From the tourist honeypot of Alum Bay, a road ambles up west from the car park along the headland. Just over the top is a discreet sign pointing to a viewpoint, achieved by a short steppy section which I hiked my bike along for the featured image of this post.

Progress had been slow, and the detour to see the Needles had added an hour to the trip, but I could now cash in on the tailwind which scooted me east past the beach at Freshwater, and along pleasant, quiet back lanes with that off-Britain island feel, like Jersey.

In Alverstone I stopped at a house invitingly offering free fruit and veg. The occupier – Richard, a cyclist – spotted my tourer, and came out to talk bikes. He was full of excellent advice about places to ride and to avoid on the island, and supplied me with apples from his tree and a water-bottle top-up. Cheers, Richard!

On Richard’s encouragement I therefore side-stepped again from the round-island route and took the lane up to the top of Culver Down, with beautiful views out to the sparkling blue Channel and chalk-white ships. I also acted on his recommendation to have a pint at the curiously isolated hilltop pub there.

The round-island route threads its way along the east coast, past some houseboats and along the expansive village green of St Helens, and then follows minor roads back towards Cowes, and right past my campsite.

I noticed it also went close to Ryde Wetherspoon; it was tempting to detour again and have a pint as reward after a long hot day, but of course I didn’t. That would have been silly.

e2e.bike > Other > Route research > Isle of Wight 1: Round the Island