Gershwin’s song ‘Strike up the Band’ was apparently referred to by wordplay-happy British musicians as ‘Bike up the Strand’, no doubt to the mystification of our mid-20th-century transatlantic chums. 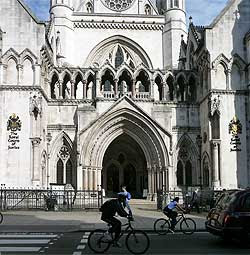 In practice, biking up Strand‘s three-quarters of a mile (no definite article – at least, not according to the streetname signs) can be a very tedious affair, particularly westwards towards Trafalgar Square, or round the traffic-Dante semicircle of Hell known as Aldwych. The road is jammed with lane-hopping buses, taxis, buses, taxis, buses and buses, and the buses can be a problem too. 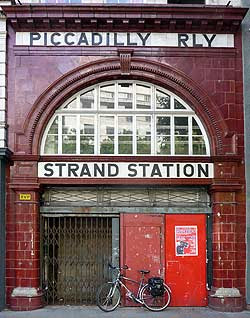 It’s a long and eventful journey though. Starting from the griffin at Temple Bar, the boundary marker for the City, you cycle westwards past the Royal Courts of Justice (above right), the facade of the old closed Strand tube station (right), and Somerset House.

Then, past Waterloo Bridge, you have on your left Savoy Court, the only place in Britain (by repute) where you have to cycle on the right both ways (it’s currently being quasi-pedestrianised though). 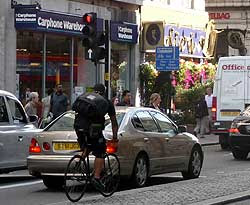 This part of Strand is home to a million shops where you can buy the sort of things you buy in shops. So thick is the traffic, and sometimes the drivers, that you’ll see cyclists scooting along the central reservation past the queues, just because they can (right). It leads you to Charing Cross on your left, before throwing you slightly off-kilter on to the bottom of Trafalgar Square. 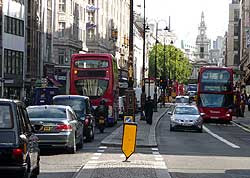 Monopoly’s Strand costs £220. What could this buy you there? In the words of the music-hall song, ‘Let’s all go down the Strand (have a banana)’. For that sum, depending on offers of the day, you could buy well over a thousand bananas from the Tesco Express on Strand.

Bananas can be a measure of cycling distance . We once met a German on a recumbent who ate 31 bananas in the 310km between Berlin and Hamburg, which suggests Strand is about an eighth of a banana.