Vine St may be the shortest street on the Monopoly board – barely 40m – yet, in its short space, it achieves something remarkable: it has absolutely nothing of note at all. No shops, interesting facades or even lamppost to lock a bike to: just a dull, scruffy cul-de-sac with a few rear entrances mooning at you. 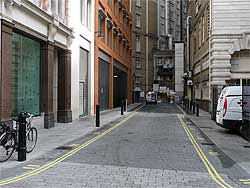 The cipher-street’s puzzling inclusion in the game is down to a police station that was here in the 1930s when the locations were chosen (the orange set represents law and enforcement). However, it’s unlikely you’ll see as much as a Police Community Support Officer on patrol here, never mind a rifle-toting Met marksman. Which means you can break whatever cycling laws you can with impunity here, though it’s hard to see what you could get up to in a street that you could lose down the back of a sofa.

(Of course, London has lots of other short streets, some of them even more bewilderingly minor than Vine St; but that’s straying from Monopoly to Trivial Pursuit.)

Monopoly’s Vine St costs £200. What could this buy you there? Apart from sneaking through the back entrances to a potential shop, there’s no way to spend any money in Vine St. (Unless you do try breaking some cycling law and get caught and fined, but that’s improbable.) The next best thing might be to treat yourself to a dinner for four at Fishworks, the restaurant that occupies the pedestrianised roadspace of neighbouring Swallow St.