There isn’t actually a Marlborough Street (except for the one in Kensington SW3, which is clearly not what they mean). 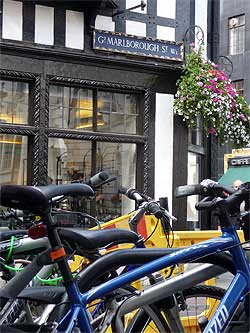 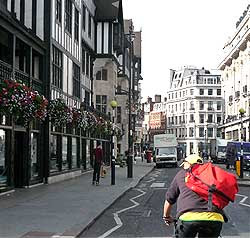 The greater of the two is a shortish, typical busy central London street, with shops and traffic and vehicles parked where they shouldn’t really but of course everyone does anyway.

The lesser is a tiny back-lane notable only for a shop with flowery wallpaper on the outside. 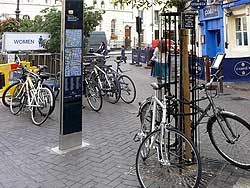 But if you cycle here to shop at, say, the idiosyncratic Liberty’s, half department-store, half ship, you might find parking a problem. There’s not much, and what there is – on the pedestrianised bit that leads off to Carnaby St – is usually full (right).

There are stern notices (below) warning you not to use the railings, which of course everyone does anyway. (I once had to moan about the clothes chain Jigsaw chaining promotional bikes to the railings here, using up a precious parking space with dead weight.) 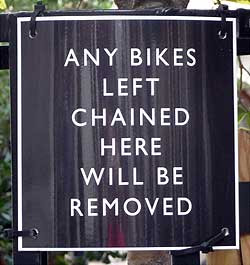 Monopoly’s Marlborough St costs £180. What could this buy you there? With £180 and Liberty’s in front of you, the world is your whelk. Take the scarf room for instance: obviously you couldn’t afford a nice one, such as the £580 Cashmere Ronnie Wood, but you could pick yourself up a cheap and cheerful Hermès scarf for a mere £140, and still have enough for a coffee and cake to boast to your friends about your extraordinary bargain.