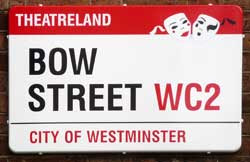 Brief Bow Street, bordering Covent Garden, was the historic home to the Bow Street Runners; it also housed a magistrate’s court, which closed in 2006.

This was a grand building where you had to listen to people in silly outfits droning on at you with arcane jargon, and pay large amounts of money for your folly. Talking of which, across the road is the Royal Opera House. 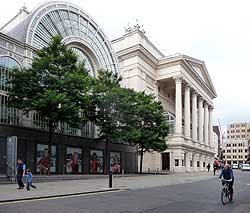 Actually, the ROH (right) is a fine place to cycle to. I’ve done it many times, and often seen people in their poshest clothes bound for an all-star Traviata or Bohème locking up their Bromptons to the convenient and reasonably plentiful bike parking right opposite.

I’ve always turned up in tatty shoes, grubby trousers and a promotional T-shirt garnered free at some PR event. But then they are my poshest clothes.

Bow St is a fairly pleasant cycle, and a popular back-street-ish cycle route north from (or south to) Waterloo Bridge. You can peel off handily for Covent Garden too. 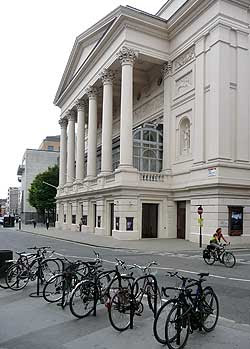 It has a bit of a slope downhill in the bridge direction, and if you time it right you can freewheel across the bike cut-through at the bottom (which is actually Wellington St, quite an electric sort of place) with a green bike signal.

That cut-through runs perpendicularly across a busy footway next to a well-touristed pub, yet it’s surprising how few conflicts there seem to be, given the amount of map-gazing tourists on autopilot on the X axis, and workbound, world-of-iPod cyclists on the Y axis.

Monopoly’s Bow St costs £180. What could this buy you there? It’ll get you a decent seat (though not the best: they’re £210) at the ROH’s Don Carlo, Carmen, or Tristan, except it’ll probably be sold out. So, tell you what, you can keep the money if you like.