This quarter-mile tumult of traffic runs west from Ludgate Hill, in sight of St Paul’s Cathedral, to the griffin at Temple Bar that marks the boundary of the City where Fleet St segues into Strand. 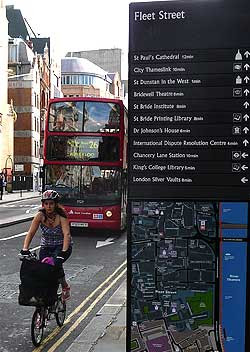 For decades the street name was a synonym for daily newspapers, but they moved out in the 1980s. Reuters was the last major news outfit to leave the street in 2005. Nowadays the Fourth Estate slags off cyclists from Wapping and Canary Wharf instead.

The road is still home to many important organisations, including the intriguingly-named International Dispute Resolution Centre. This may be handy if you get into a territorial conflict with a honking taxi in one of the street’s zig-zagging chicanes where the street switches between double and single lanes. 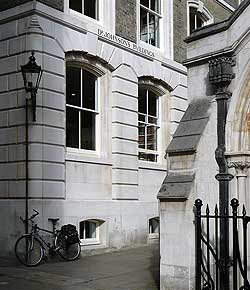 And if the conflict makes it to court, you might be defended by a legal team that trained or practise at one of the many Inns of Court, just off Fleet St. They’re fun to poke around by bike, with their quiet college-like courts and quads just the width of a legal tome from the road.

Just off Fleet St is the fascinating Temple Church. The old HQ of the Knights Templar, it’s featured in the famous book The Da Vinci Code. From the time I picked it up to the time I put it down, I couldn’t stop turning to the next page, to see if I could find something worth reading. 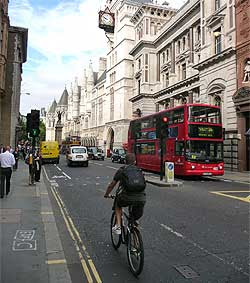 As with most London thoroughfares, there’s nowhere near enough bike parking on Fleet St, even though there are lots of useful shops you might want to park outside.

Last month, for various reasons, I had to take a picture of a certain Fleet St building from a first-floor ledge opposite. As it happened, the first-floor ledge belonged to Hoare’s Bank, which kindly arranged to let me in to take the snap. Just as well all those newspaper hacks have moved out of Fleet St – goodness knows what they’d think in the middle of a financial crisis if they’d seen a bloke standing out on a bank’s window ledge.

Monopoly’s Fleet St costs £220. What could this buy you there? About half an hour of legal time from the snazzier legal practices in one of the Inns of Court. Probably better not to get dragged into any legal disputes, then. Especially libel. Jeremy Clarkson, I take it all back.