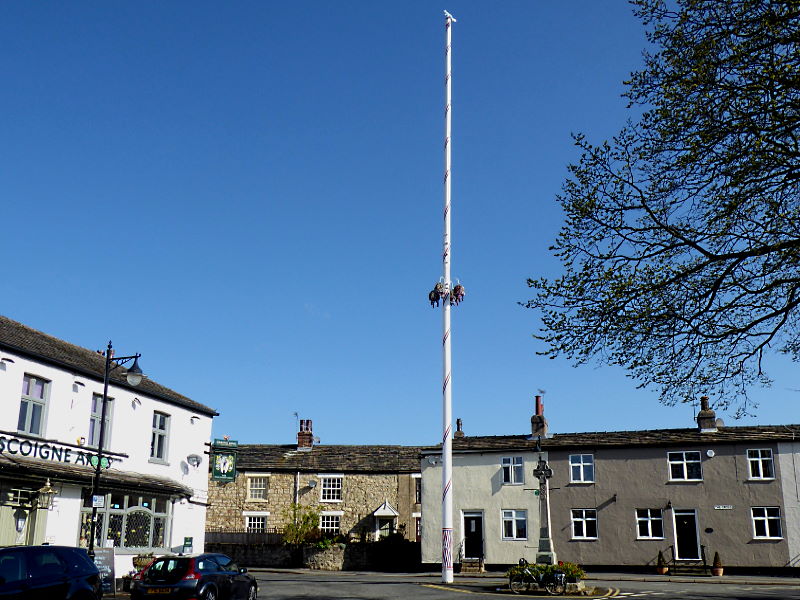 The Archers is set in a West Yorkshire village.

Well, its theme tune is, anyway. And my trip to the place in question formed a lovely little half-day ride on this sunny morning.

The BBC Radio 4 soap may take place in ‘Borsetshire’, somewhere round Worcestershire or Warwickshire, but the signature music is explicitly about the village of Barwick-in-Elmet, a few miles northeast of Leeds.

The famous tune’s lolloping, rustic 6-8 evokes a dance round a maypole. Barwick’s maypole. At 26m (86ft) it’s the second highest in Britain, just a couple of feet shorter than the one in Nun Monkton outside York.

Yorkshire composer Arthur Wood (1875–1953) wrote the piece in 1925 as ‘Barwick Green’, the final part of the four-movement light-music orchestral suite My Native Heath.

However, Arthur evidently wasn’t that familiar with his indigenous moorland. Barwick has never had a green. In fact, the lofty maypole stands in the middle of a road junction, outside the Gascoigne Arms pub, next to a cross commemorating WWI dead.

I took the train to Micklefield and cycled up the old Great North Road / A1 to Aberford, whose name has always confused me. Mouth of the River Ford? Or ford over the River Aber?

But the ‘aber-’ prefix would be in keeping with history. Barwick’s ‘-in-Elmet’ suffix refers to the Dark Ages kingdom of Elmet, which occupied a lot of modern West Yorkshire. Its inhabitants spoke a Cumbric language, related to Welsh, and there seem some historical travel links between Elmet and Wales.

The maypole was just visible on the approach to Barwick along the main road from Aberford, which was busier with cyclists than cars, and revealed itself very impressively on arrival in the village’s centre.

Barwick looks a pleasant and well-to-do sort of place. There are two pubs (the Swan and the Gascoigne, which was a pre-hip microbrewery until 1954); a pizzeria; a Maypole Tearoom; hairdressers; gift shop; a village store; a bike shop in a house, Fine Fettle Cycles; amiable locals; ninja knitting…

There are also helpful info boards, from which I was intrigued to learn that Barwick was an alternative hub in the early 20th century thanks to regular weekend visits by a group of ‘artists and bohemians from Leeds’.

There may be no village green, but Barwick has a green space well worth visiting, and I don’t mean the playing field on the Leeds road. A few yards behind the maypole is a mound: a hill fort that belonged to a neolithic community of a dozen or so huts, and which later became a ramshackle Norman motte’n’bailey castle.

It proved a fine place to clamber up, have a snack, and admire the view that saw it serve as a lookout post for enemy planes in WWII.

I didn’t see any malign aircraft but I did see a red kite. And a fox, though not a real one: it adorned the top of the maypole.

Arthur Wood’s jaunty theme was, of course, jangling in my head like a hangover. The comedian Billy Connolly once suggested it should supplant God save the Queen as the British National Anthem, being far jollier.

But I’m no Archers fan, and not especially keen on the theme tune either; all a bit clunky for me. Plus it sounds rubbish when I play it on guitar. But then so do most things.

However, if you want to chase up the rest of Wood’s suite, one YouTuber has thoughtfully put up the original 1925 gramophone recordings.

The other movements are ‘Knaresborough Status’, ‘Ilkley Tarn’ and ‘Bolton Abbey’; pieces of their time, musty and stark like line drawings.

(They occasionally reminded me of Vernon Elliott’s music for 1960s and 70s children’s animations Noggin the Nog and Clangers. Not sure what Arthur would think of that, though.)

I worked my way back to Micklefield by some pleasant bridleways with Blytonesque names (Bog Lane, Nanny Goat Lane). They were just as busy with cyclists as the roads were, which was very. This stuff about Yorkshire being a cycling county is no myth.

Parlington Lane took me car-free back to Aberford through woods and some surprisingly long tunnels, especially as there seemed no hills for them to be burrowing through.

En route back to the station I dropped in on Lotherton Hall, a manor house and gardens full of picnicking families and a few road cyclists on a tea stop. Some of my female friends complain about the feeling of being looked up and down and judged, negatively, on their appearance. Well, I know how they feel, except it was my bike generating the mild contempt.

I got back to the train station just as the clouds rolled in and the drizzle started. There was a shelter on the platform but someone had been sick in it. Too much dancing round the maypole, perhaps. I bet Arthur never wrote about that.