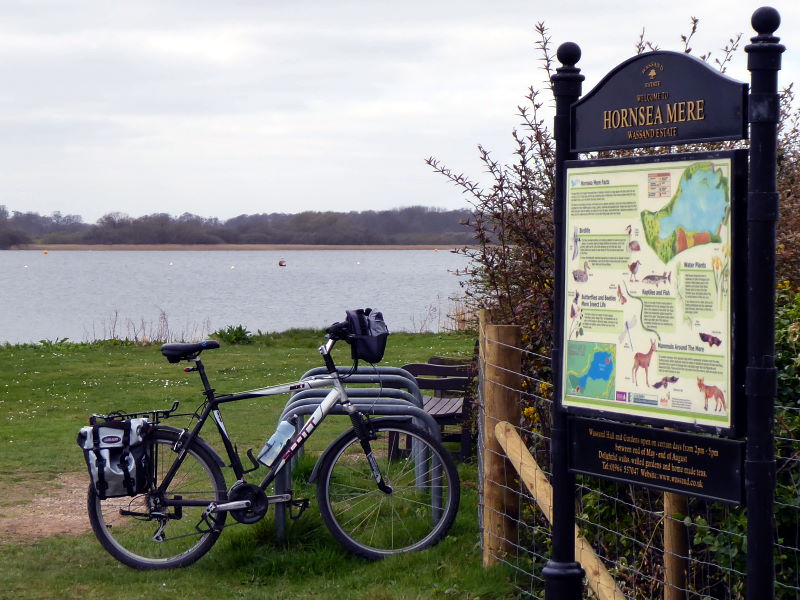 Hornsea Mere is Yorkshire’s biggest body of water. The great county is big on many things liquid – rivers, reservoirs, beer – but not naturally-occurring lakes.

(It even inspired me to write a guitar piece, Hornsea Mere, about the experience. You can hear it in the player below.)

I started at Beverley and headed east. The River Hull dawdles its way down to the Humber from here, and the flat canal-ish landscape can feel quite Dutch. Except for the absence of cycle infrastructure.

A few miles of judiciously selected paths by the side of main roads got me to the village of Seaton, after which a bridleway lined with spring daffodils led through the Wassand Hall Estate to the side of the water itself.

The Mere is glacial, but anyone hoping for heroic alpine landscapes and dramatic valleys will be disappointed. It’s all flat Plain of Holderness stuff round here, with the emphasis on ‘plain’.

And the water itself is not much more than a giant puddle, only 12m at its deepest. It was tried as a flying boat runway in the early 20th century, but quickly abandoned as unsuitable. It was smooth, but also too tacky for anything to take off. And it turned out to be even shallower than it first appeared. My friends who’ve tried finding men on Facebook Dating report similar problems. At least Hornsea Mere didn’t lie about its height and forget to mention the serial bankruptcies.

Those qualities that made it tricky for pilots do make it popular with birds, however. I arrived armed with binoculars, and having done my homework on the Merebirders blog, and saw a Hooded Merganser, whatever that is. Rare, but evidently less impressive – the helpful chap a spotting scope told me – because it’s ringed and therefore a mere escapee.

I also enjoyed a toasted teacake and brew from the cafe, and sat on one of the many benches in memory of those who loved this spot and this view, and understood how they felt. It was all rather calm and pleasant, despite grey chilly weather, too early in the season for hire boats.

The Mere is only a couple of hundred metres from the seafront, through Hornsea town centre. There weren’t too many people out on the chilly, windy sands – and nobody was swimming – but the promenade and cafe tables were fairly packed. I slightly regretted the bacon roll I’d had earlier, because I was now too full for fish and chips, and there was no shortage of places offering that.

Hornsea is the eastern terminus of the Trans Pennine Trail, a 215-mile mishmash of paths, trails and ways from here to Southport on the Irish Sea, which I rode in 2011. Today I was only heading from here to Hull along 12 miles or so of railtrail.

Like many railtrails, the Hull to Hornsea path is delightfully flat, simple to follow and car-free. But also, well, a bit dull, one long barely-punctuated paragraph of grey-green prose. Still, I had a tailwind, there were plenty of cyclists out on it, and I was under an hour from the train station, and my transport back home.

At least it would have been under an hour, had it not been for that other feature of railtrails, a puncture, about six miles from Hull. The puncture was just slow enough, and I was cycling just fast enough, to be worth stopping every mile and pumping it up, but the delays meant I missed my intended service and had a two-hour wait till the next train.

Unable to cycle anywhere, I had to hang around Paragon Station – not the most pleasant of places on a Saturday evening, especially with the waiting rooms out of bounds.

Still, you can’t deny the place has a certain chemistry. Mainly that of alcohol, nicotine, and synthetic cannabinoids.

Listen to my piece for classical guitar, written in 2021. It was inspired by the memories of this day’s ride: sparkling water, flocks of birds, and honking geese (particularly at the end). (MP3, 6min 39sec).