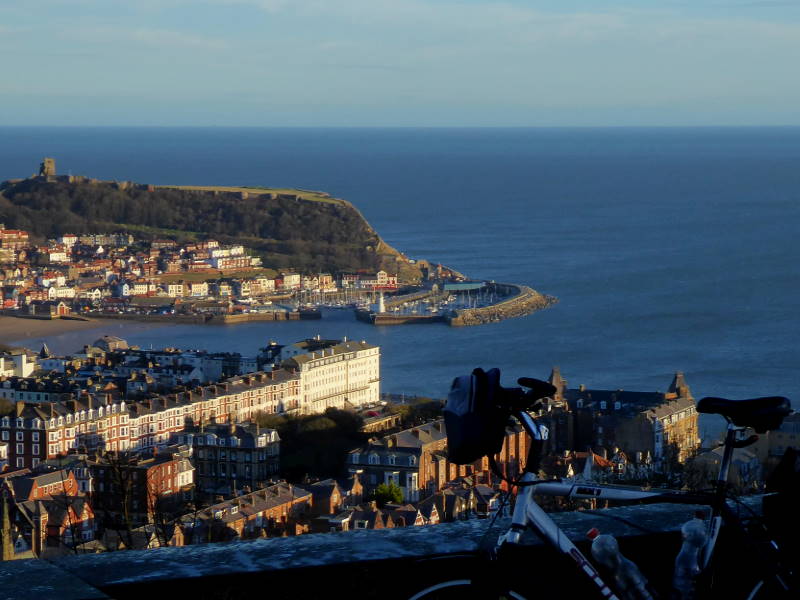 Caribbean? Well, the locals call it ‘Scarbados’, among other less complimentary terms (like many British seaside towns, Scarborough has its share of deprivation). It may have been chillier than the new republic over in the West Indies, but the bright beach huts and golden sands at least photographed well. When I eventually got my ski-gloves off to operate the camera.

Even without a bucket and spade, or a fistful of change to feed the amusement arcades, there’s plenty of quirky and interesting stuff.

Famous residents include Anne Bronte, who died here, and father of geology William Smith, who didn’t. (He was living at 1 Newborough, handily placed between Greggs and Subway, and close to Wetherspoon – a good example of super position* – but caught a fatal chill working in Northampton, which may serve as some sort of warning.)

And the railway station had a set of Gilbert-and-George-esque stained glass windows in homage to WWI poet Wilfred Owen, who lived here while writing many of his sombre anti-war verses. But I was more taken with the bench on Platform 1, which claims to be Britain’s longest at 139m, seating around 170 people snugly, or perhaps just two people very socially distanced.

I was also taken with the Tramway: a Victorian lift dating back to Scarborough’s heyday, when it was one of the first resorts to capitalise on the democratisation of the seaside holiday made possible by railways and progressive holiday legislation for the working class.

There were once five cliff lifts in all; now there are two, and with the nearby Spa Lift closed for the present, this is the only one.

And it welcomes bikes! Hooray! For £1.20, you get a scenic two-minute ride with a bit of friendly history too.

Anyway, I spent a delightful morning riding up to Oliver’s Mount – dodging round some ROAD CLOSED signs en route – for the splendid view down to the South Bay, and an even more splendid bacon roll from the cafe at the summit.

Then it was a swoop down through the woods to Scarborough Mere, a tranquil lake that at 6.5ha is Yorkshire’s fourth, or perhaps sixth, or maybe fifth, largest natural lake. A paved lane goes round its perimeter, as did I, slowly.

I’ve cycled in and around Scarborough many times, especially the Cinder Track, which goes roughly twenty miles on a railtrail to Whitby (and we mean ‘roughly’). But this time I was pleased to discover the pleasant downhill scoot through some lush ravines on smooth paths from Woodland Ravine down through Peasholme Park, with its cod-Chinese temple. (Which reminds me, Scarborough is a great place to have fish and chips.)

In short, I very much enjoyed the relaxed pace of life here at ‘Britain’s first resort’. No point hurrying here.

Especially because half the trains back to York were cancelled.