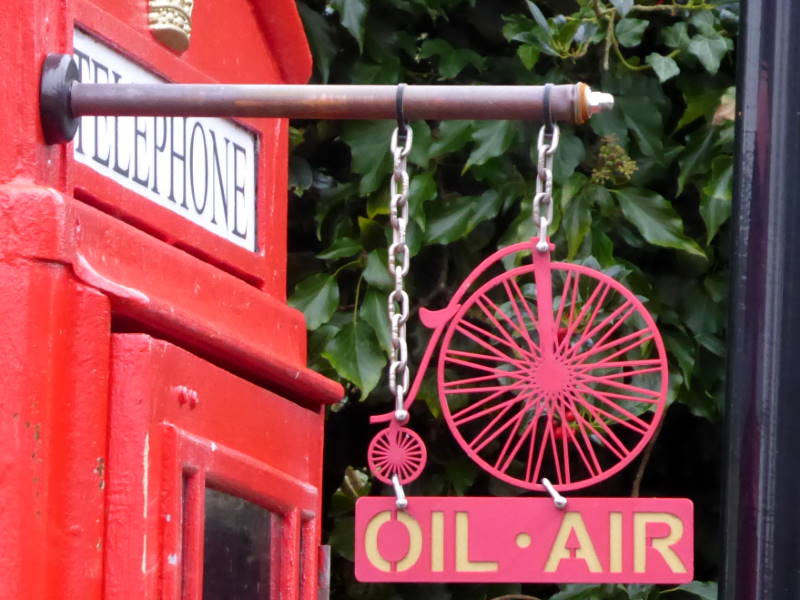 Quick tune-up of brakes while passing by on the Way of the Roses? Day-ride puncture from all that hedgerow cutting? Silence a noisy drivetrain that had put local birders on alert for a corncrake?

Millington phone box, in the east side of the village past the pub, is your answer. It’s surely the only repair hub marked on the OS map, albeit with a phone symbol.

In Monty Python’s ‘Bicycle Repair Man’ sketch, a world in which everybody is Superman (and Superwomen and Superkids) has one secret superhero: FG Superman, whose alter ego is Bicycle Repair Man.

In the sketch, he changes in a launderette when called on to save a cyclist by fixing their flat, rejigging the mudguards and adjusting the saddle.

The real Superman has been associated with booth-based identity switches since the 1940s, fansites tell us, even though he did it relatively rarely. However, if he were to cycle the Way of the Roses – perhaps taking a few seconds to complete the 180-mile pennine traverse rather than the standard three or four days – he would have the ideal costume switching space here.

The bike-friendly booth was spruced up during lockdown by friends and family of Mike and Ali, whose house overlooks the structure. It was mainly Mike’s idea – he’s a keen cyclist – and involved community support: contributors are name-checked alongside the glass panels in the door.

Ali (who is a writer and researcher specialising in Contemporary Gothic: see her website gothicity.uk) happened to be around on my visit. She was happy to tell me about their unique installation. It’s warmly embraced by users, who often leave donations financial or material: tyres, inner tubes, shorts, and a first aid kit have been given, among much else.

On my own travels, phone boxes have often served well as shelter from downpours, and I’ve often noted the contributions left by previous users in those, too. Usually contributions of the territorial-marking kind, though.

Mike, evidently, has been only half-jokingly trying to get their phone box licensed as a wedding venue, so perhaps Superman isn’t the only one who might be undergoing transformations inside it.

It was all rather uplifting to see, and was part of an uplifting day despite the damp solstice gloom. I’d taken the bike-friendly X46 bus from York to Pocklington and done a Wolds loop, round up to Huggate and back along the modestly stunning lane through Millington Wold.

This is one of my favourite parts of Yorkshire, hence Britain, hence the world, for day-rides, thanks to dry chalk valleys’ compact, elegant, gentle curves. On the flat, snaking, valley-bottom roads, it’s like you and bike are a stylus, picking up the vibes from grooves of a vast LP. Made of chalk. And green. With a lot of sheep. OK, so not much like an LP at all.

Of course, Mike and Ali’s bike hub is only one example of repurposed old phone booths. Hundreds, perhaps thousands of the old structures across Britain have found new lives, usually to house defibrillators (the less used, the better) or libraries full of Dan Brown paperbacks (insert your own joke here).

One old booth in Scotland was even turned into a bar: in Kilberry, between Lochgilphead and Tarbert on the west coast. Sadly, when I passed by, it was a bit too early for a couple of drams at the Kilberry Inn. Shame: otherwise I could have had the entire bar to myself.

But Mike and Ali’s phonebox is my favourite. There may not be a phone inside it, but they’ve made a good call.

And Yorkshire is surely Britain’s best county for interesting phone boxes. I’ve come across many in my rides, and you can see my favourites at the Top Ten Quirky Yorkshire Phone Boxes page.

I rounded off my ride with a pint of Bradfield Farmer’s Blonde at the Black Bull in Pocklington, and headed back home on the X46. Ah, modern buses, with all mod cons – wifi, tables, bike spaces, recharging points.

Well, almost all. Not toilets, yet. Luckily York wasn’t that far away…