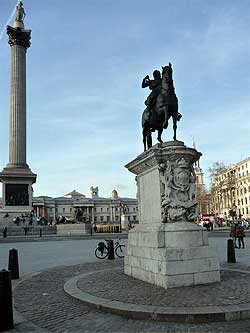 Where is it? Trafalgar Square, at the top of Whitehall, at the statue of Charles I, just under his horse’s bum.

What’s quirky about it? It’s London’s very centre: the point to which a ‘distance to London’, notionally, is measured. It’s the origin of the national roadmap; England’s kilometre-zero. The point used to be marked (from 1290 to 1647) by Eleanor’s Cross, a replica of which now stands in front of Charing Cross Station, a few yards east. You can comfort yourself with the thought that, whichever direction you head from this point, you’re getting away from London. 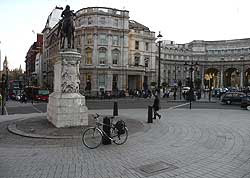 Why bike there? This point is unique in that from a single point, you can see both the seat of the monarchy (Buckingham Palace), the seat of government (the Houses of Parliament), and the seat of a horse. You’re right by Traf Sq too, of course, and you know what that means: you’ll spend the next quarter of an hour finding a cycle rack.