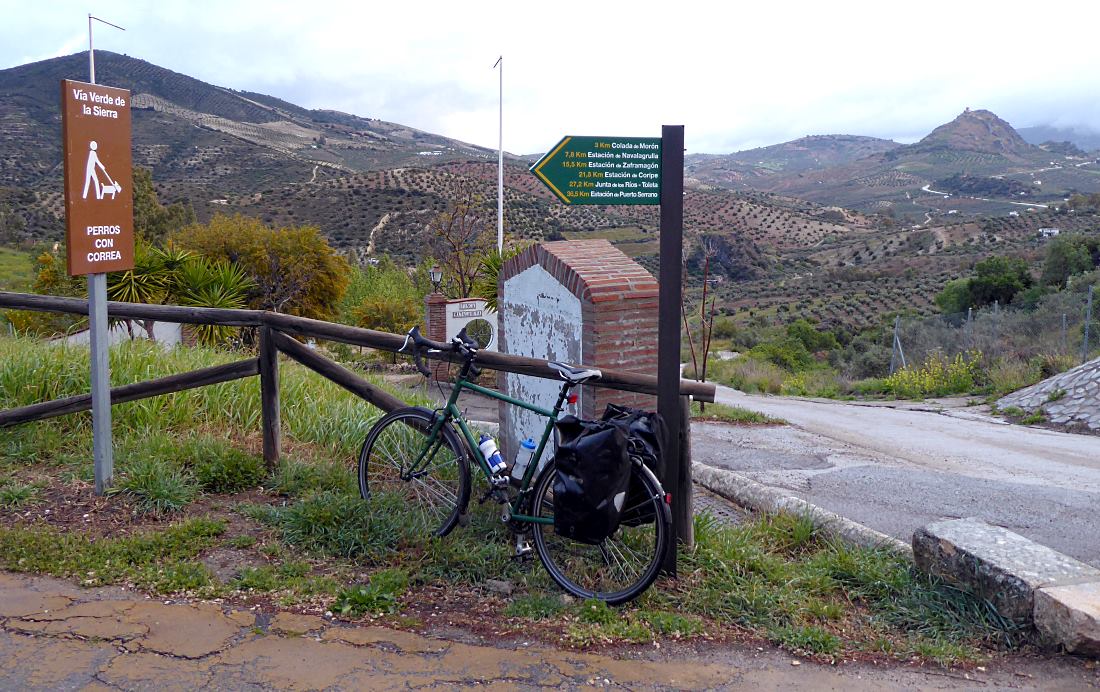 With strong headwinds and heavy showers forecast for the afternoon, I was keen to get an early start on the Vía Verde de la Sierra – arguably Europe’s most spectacular railtrail, which begins here (pic) in Olvera. I prepared myself with a cafe con leche from the bus station cafe, but desisted from adding a whisky or rum like the locals. It was only 8am after all.

The reason for doing it east to west is that it drops 250m, making it level or downhill pretty much all the way. You can freewheel much of the time, though progress isn’t as fast as you might expect, as you’re stopping to take pictures every 30 seconds (pic). 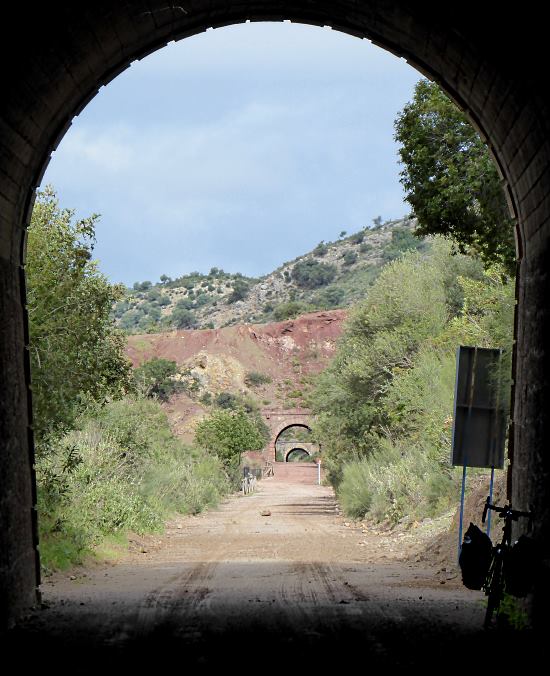 There are over 30 tunnels (pic) on the trail. Some are illuminated; some are too short to need it; some have lights that automatically click on when you ride through; and two long ones (over 500m and curving) are unlit and pitch black.

My front light was charged up and bright, but I pity anyone trying to find their way through without any – it’d be blind, chaotic fumbling. No, this isn’t another Brexit analogy. Because you at least know the tunnel has a logical way out eventually. 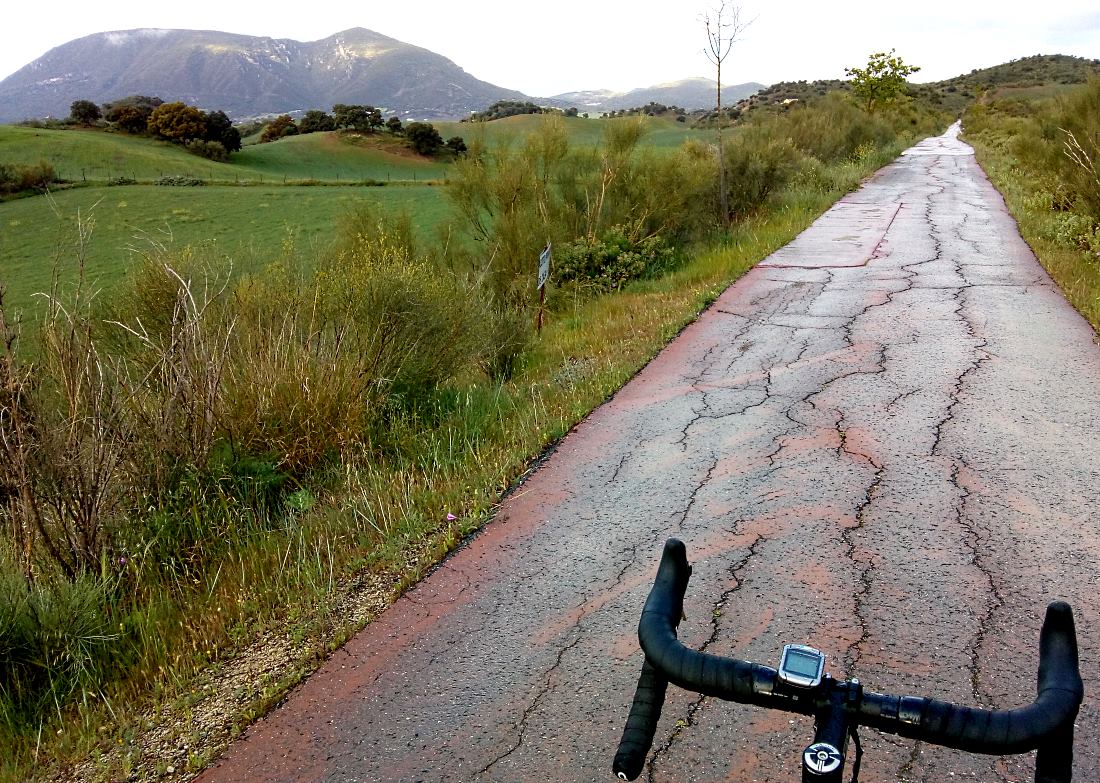 The surface is sealed for the first few km (pic) and then turns into good smooth gravel that my sturdy touring bike eats for breakfast. Rather like what I eat for breakfast when I unwisely skimp and go for Aldi’s muesli.

There are two grand viaducts on the route. Here’s the first (pic). As the image suggests, I had the route to myself all day. Just as well, when you hydrate as often as I do, and supplement that with coffees at the trailside cafes, given that what goes in must come out… 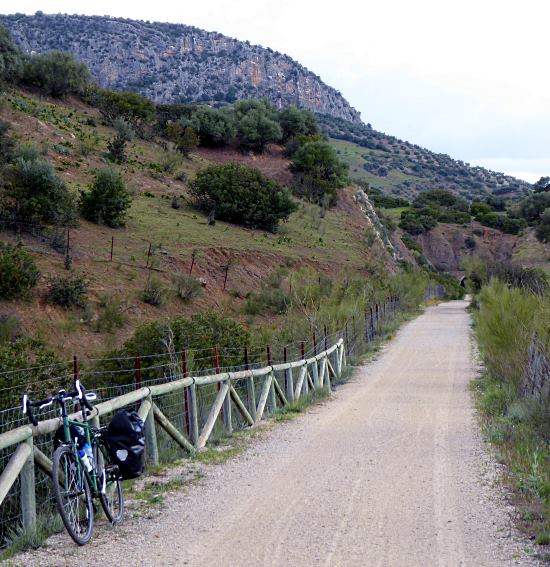 The scenery is continuously impressive (pic). Just as impressive, according to the info boards, is the wildlife, such as swooping birds of prey.

The most exotic animals I encountered though were sheep and cows in the occasional surprise of a farm, and a sprinting snail no doubt trying to escape being made into a tapa in that bar back in Olvera.

By noon the sun was out (pic), it was warm, the headwinds hadn’t showed up, I had chocolate for lunch, and I was happy. 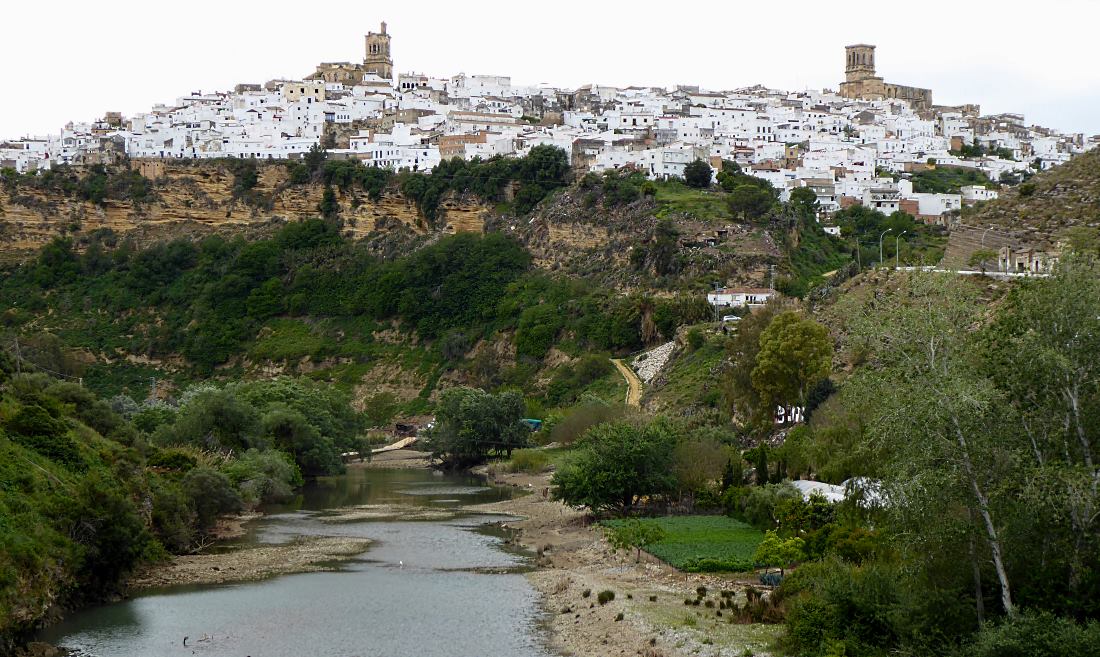 After the end of the Vía Verde de la Sierra, I headed 40km on back roads on the plain to my hotel at Arcos de la Frontera (pic), a popular tourist white-town. Not only did the headwinds now show up, but so did the rain, which in Spain, falls mainly here. On me, in fact. I entertained myself in the slow slog into the drizzle and breeze wondering what Henry Higgins would have made of Eliza Doolittle’s pronunciation of the famous phrase had she come from Hull. 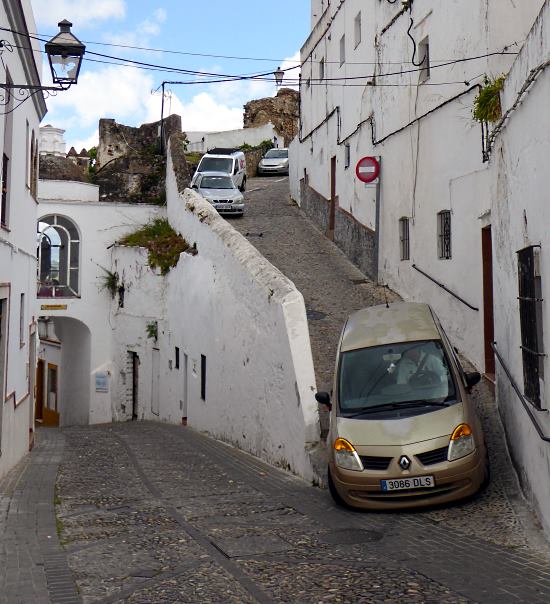 Fortified by a delicious tapa of solomillo con roquefort y patatas fritas and a beer, I dodged the tourists inadvisably driving their hire cars down Arcos’s cramped lanes (pic), many of them only slightly wider than a car, and only slightly narrower than their wing mirrors, and headed happily to my hotel.
Miles today: 53