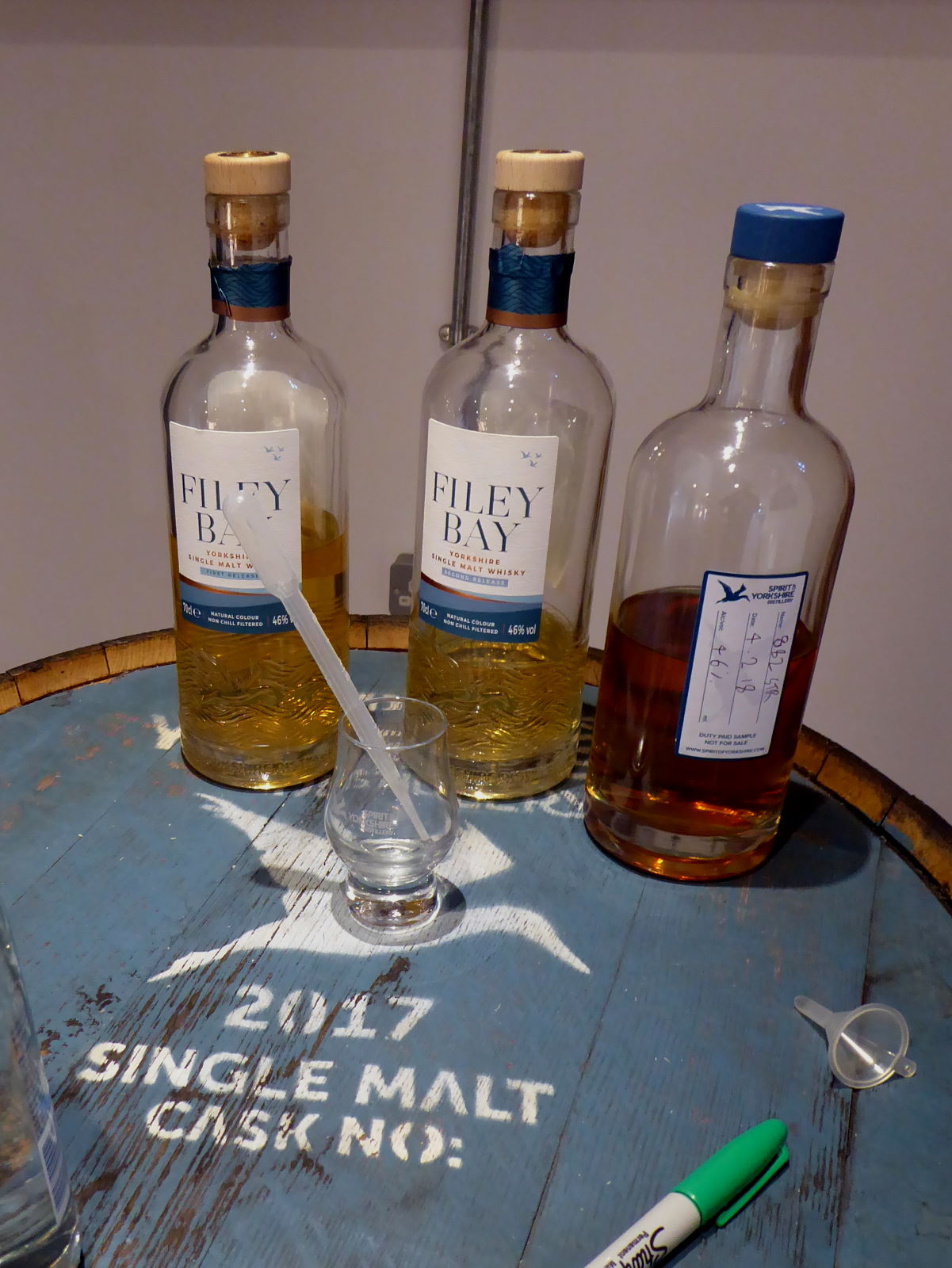 Yorkshire being a sort-of-country in its own right, it was only a matter of time before we got a National Whisky.

Wales has one after all: Penderyn, based in the Beacons and launched in 2004.

And England – the nation bordering Yorkshire – has had St George’s, in Thetford, since 2006.

But in May 2016, the extra-Caledonian whisky club was joined by a distillery in the village of Hunmanby, near Bridlington. Spirit of Yorkshire’s first release, Filey Bay (pic), came this year.

So, never mind Scotland’s Whisky Trail, the dram-hopping tour of Speyside that I cycled in 2015. I can now do a Yorkshire Whisky Trail of my own, from my front door to a distillery, simply by riding 40-odd miles across the Wolds towards Filey.

Which is exactly what I did this cold, sunny morning: a nippy day in prospect in more ways than one. I threaded my way up and down narrow back lanes through hilly villages such as Birdsall, Wharram le Street and Duggleby. All was quiet apart from the odd chirpy dog walker, and the papery rubbing of leaves caught in mudguards. 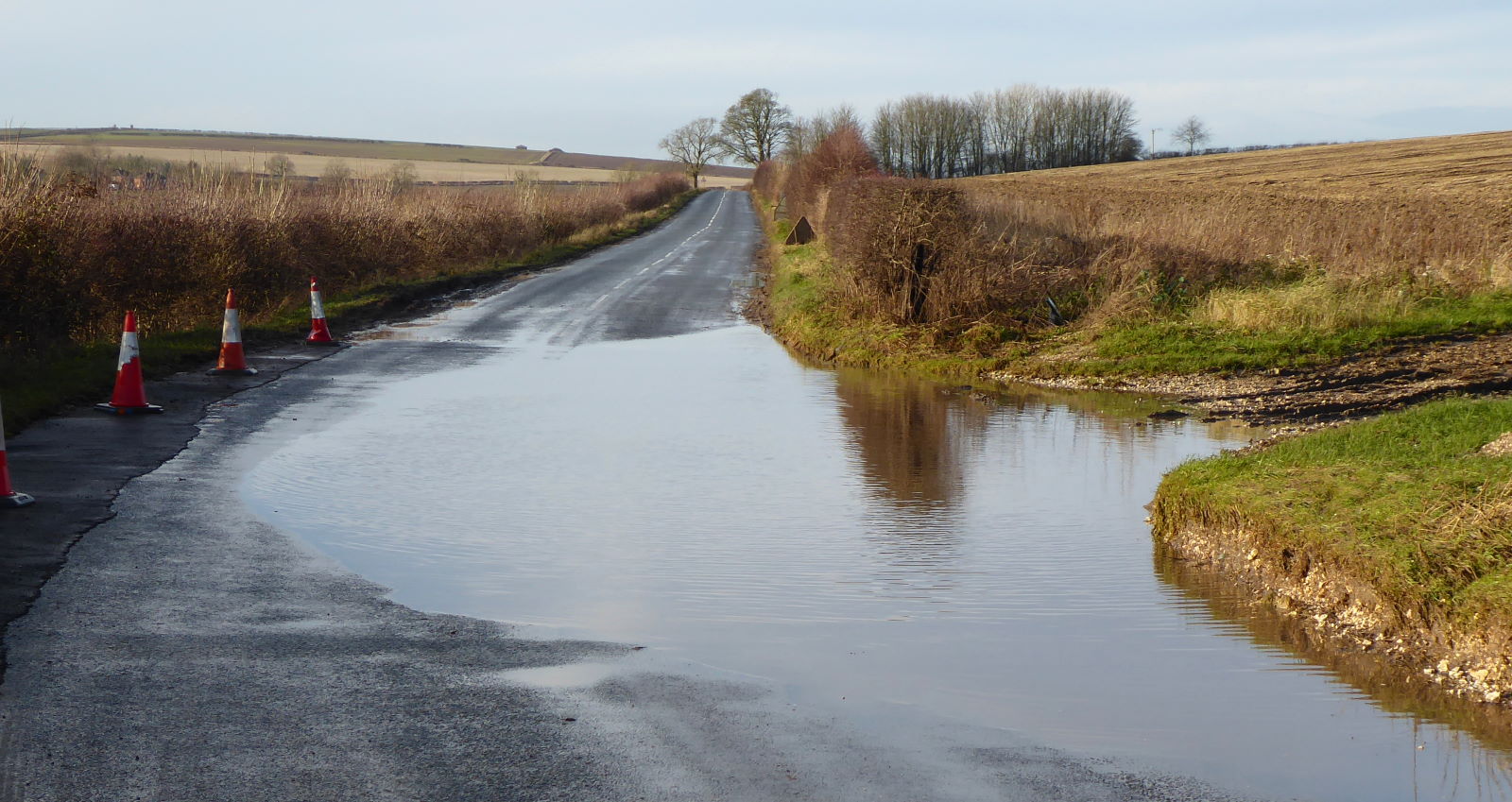 Recent rains had left some monster puddles (pic). The copious local water, filtered by the chalky hills, is a key reason why the distillery is here – but first, propelled by tailwinds and the now flatter roads, I had a brewery to visit. 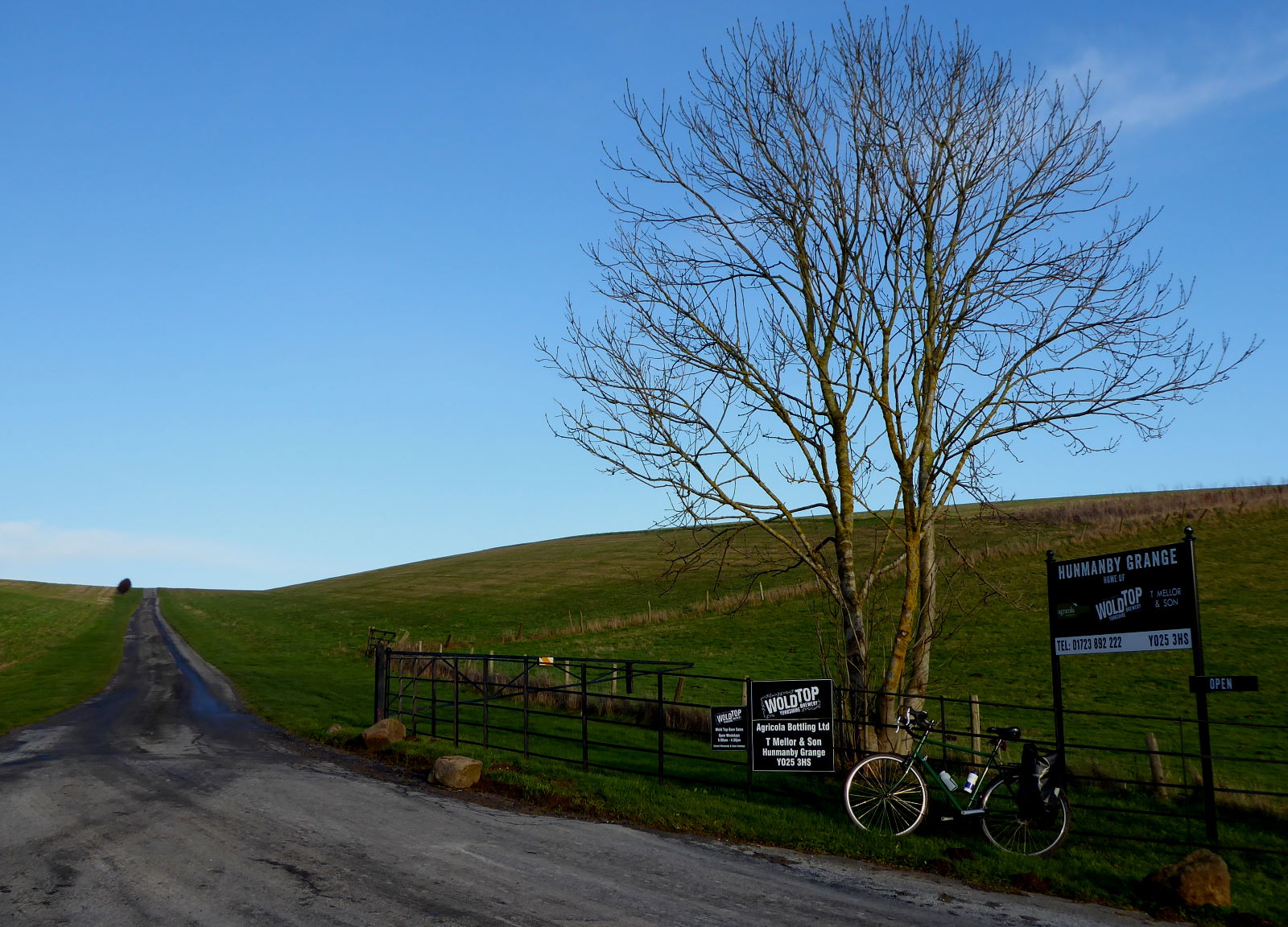 Wold Top Brewery is just outside the village of Wold Newton, in characteristic Wolds landscape (pic). And characteristically on top of a hill.

The scenery round here famously inspired David Hockney, who lived in Brid for many years. The austere beauty of its dry valleys, compact hillscapes and letterbox panoramas reminds me of Eric Ravilious’s chalk landscapes. 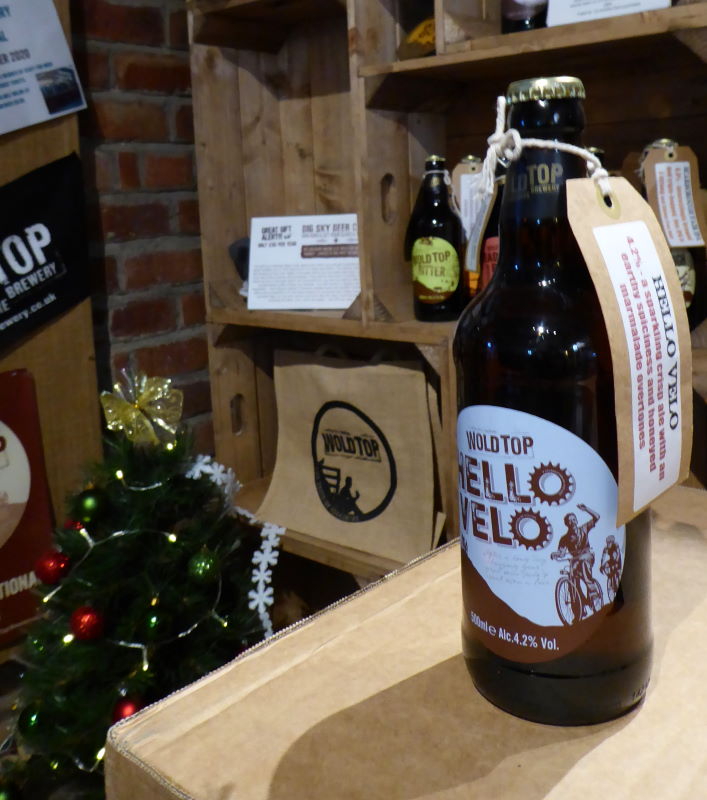 Wold Top starting making beer here in the early 2000s as a diversification from their five-generation farm, using barley from their fields, and water from their borehole.

It was brewed for the 2014 Tour de France (which came to Yorkshire), but has proved durable beyond being a mere festival brew.

See? The TdF has left many positive legacies beyond simply better tarmac on a few Dales roads.

I pedalled on to Hunmanby, with the North Sea now in view (pic). Somewhere down there is the industrial estate I was heading for… Spirit of Yorkshire’s distillery is a modern building with visitor centre and cafe, reassuringly festooned with casks (pic).

Cycling provision is mixed: second-rate butterfly-clips for parking, but they sell bottles of Hello Velo in the shop, so: swings and roundabouts.

Being a sister company of Wold Top means SoY can benefit from its ‘wash’: fermented barley juice. In essence, SoY distills WT’s beer to make its whisky, which gets its flavour rounded off from that long storage in sherry casks.

I tasted some of SoY’s first offering, the Filey Bay single malt, at Bradford earlier this summer, and was impressed: light, smooth and sophisticated, in the same way as my town bike isn’t. 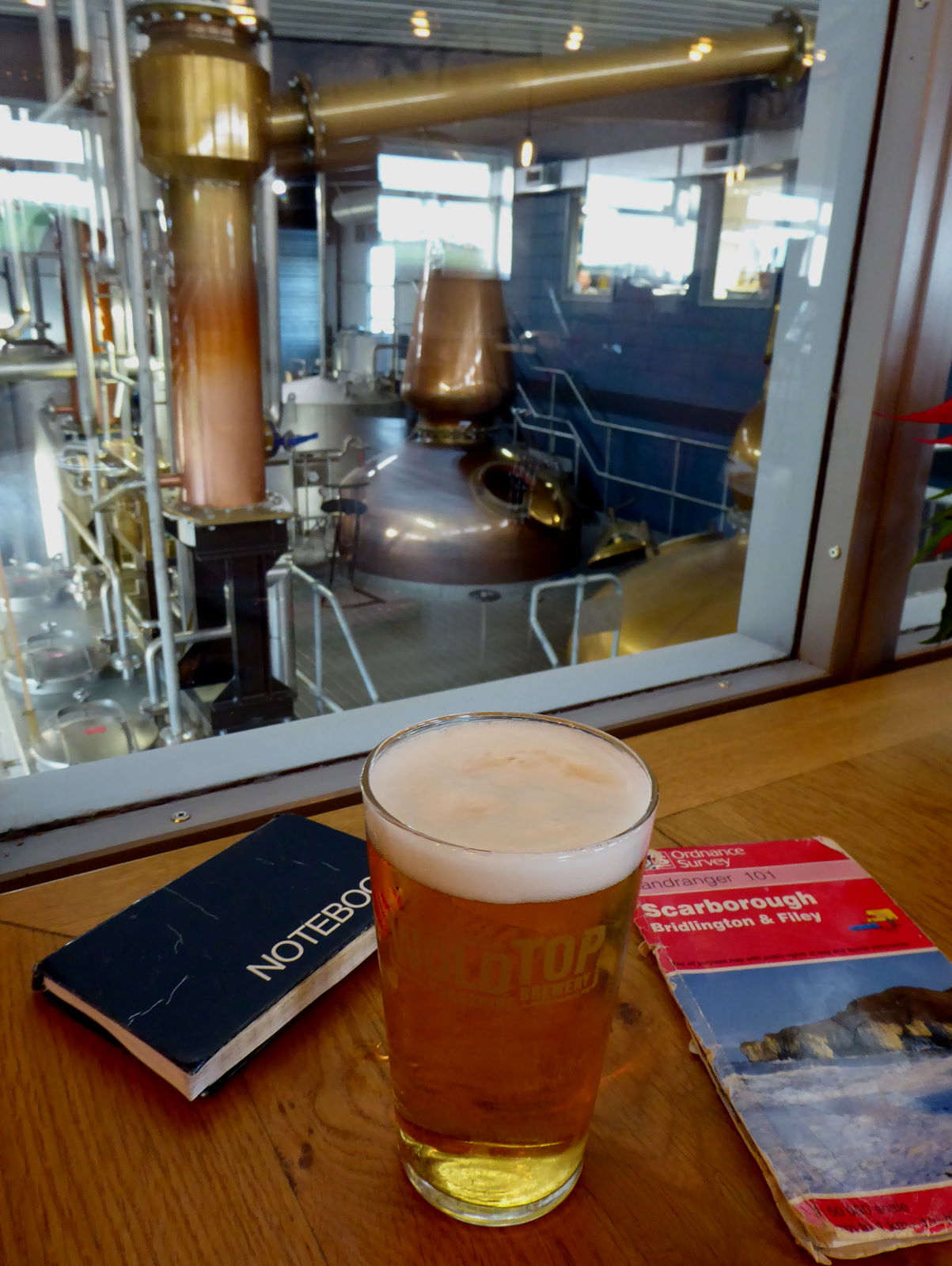 But I wasn’t being a dram queen today. Instead, I had a pint of Wold Top’s Against the Grain (4.5%, crisp and refreshing, hoppy, notes of ginger beer and grapefruit) in SoY’s Pot Still cafe.

The view over the factory workspace (pic) brought to mind my grandad’s joke:
I just found my wife making whisky at home illegally. But I love her still.

(His repertoire of zingers was not extensive; among his other favourites was to ask, whenever a soprano voice was heard on the wireless, Wassup wi’ er? ’As she got ’er ’and fast?) 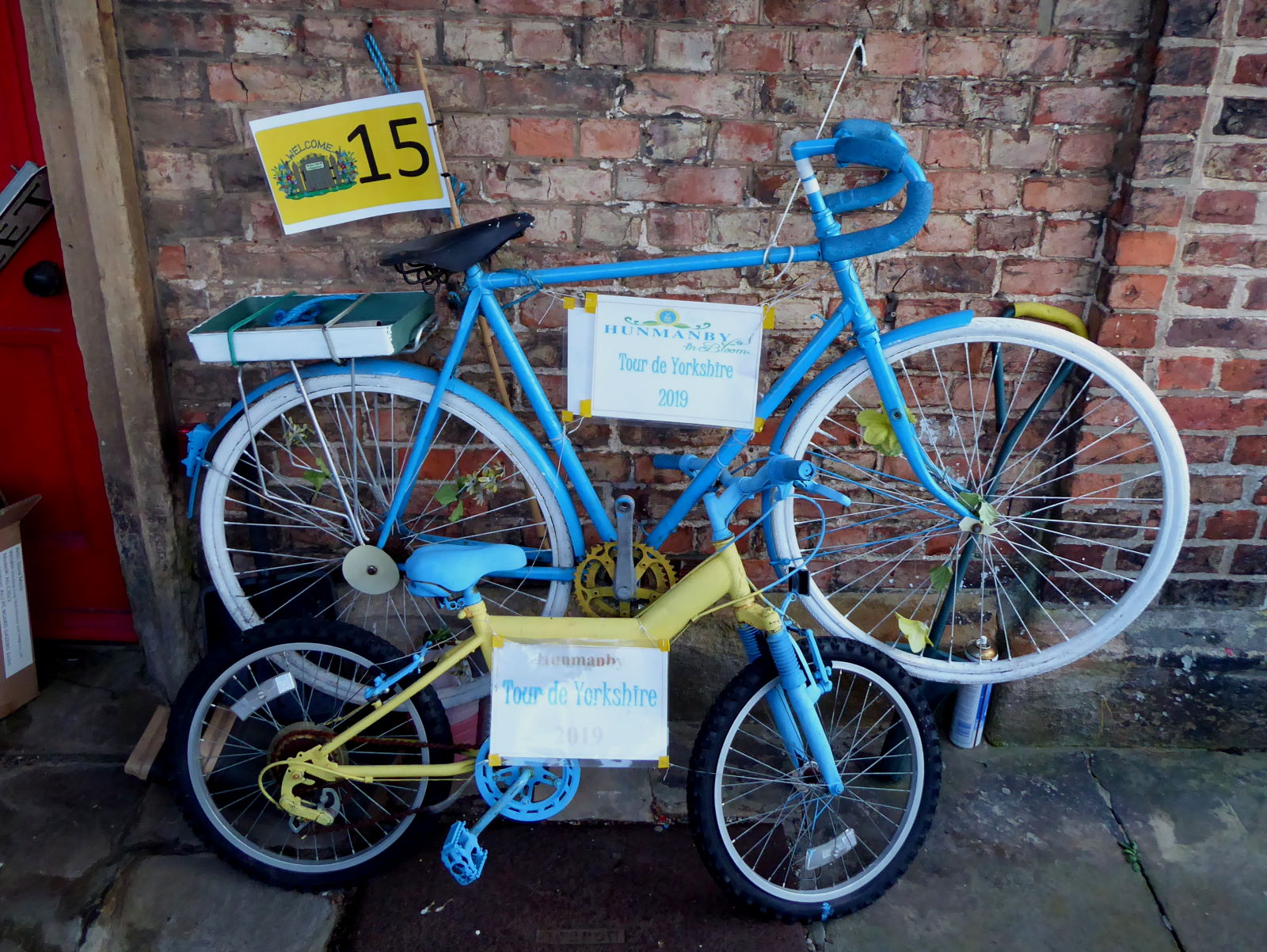 Anyway, fortified by the beer, I was in good spirits, even if I didn’t take advantage of the distillery tour. I trundled to Hunmanby station for my train home, and was pleased to see this domestic celebration of the 2019 Tour de Yorkshire (pic), which went past here. 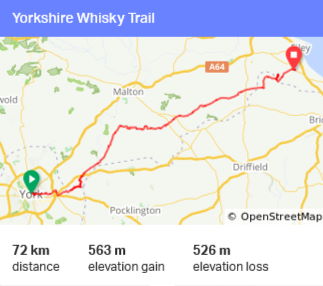 So, that’s settled: Yorkshire now has its own Whisky Cycling Trail (pic), thanks to me, and I suppose Spirit of Yorkshire too.

Anything Scotland can do, so can we.