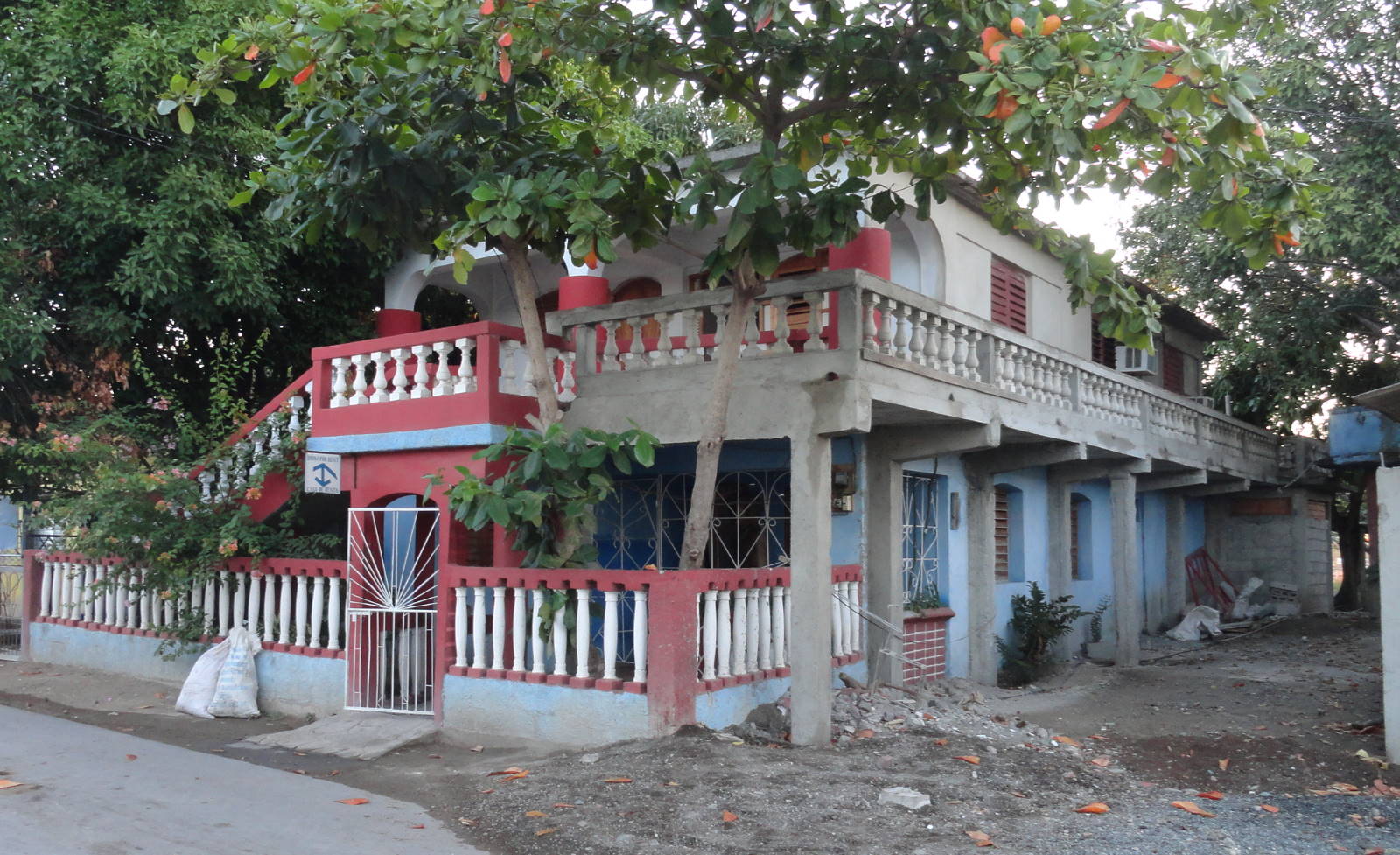 Cuba gets hot in the afternoon, so I’m starting early. My 7am departure today meant no breakfast, and no proper goodbye to my casa’s host: I had to wake him up to retrieve the bike. I felt a bit guilty, because it had been an excellent stay with an entire first floor flat to myself (pic). But only a bit. Luckily, cycling is one belief-system that does not oppress its followers with feelings of guilt.

I had a couple of kiosk rolls for breakfast and admired the hills, splendidly illuminated by the morning sun, before cursing them as I had to push up their steep flanks. On the plateau was a succession of villages and straight undulating roads, some muddy, often lined with queues of people waiting for buses or lifts. Life moves very slowly here; so with my cycling pace, I felt right at home. 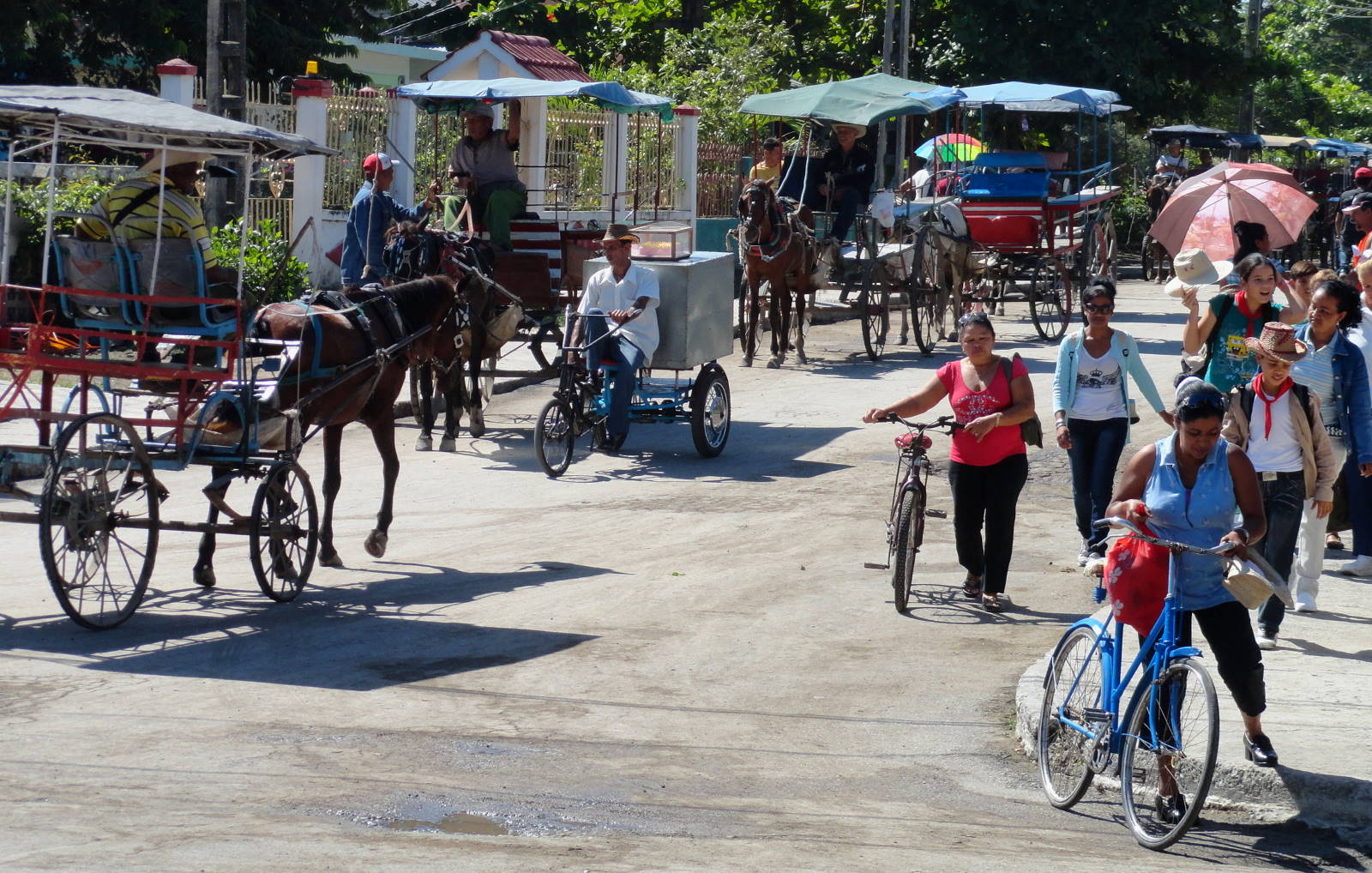 For the second half of the day’s ride I had a slight headwind. This gave me plenty of excuse to stop for refrescos, ice creams and jugos, including my favourite chirimolla (custard apple). At Media Luna, a lively town with a bustling centre (pic), I stopped to snack and peruse maps. 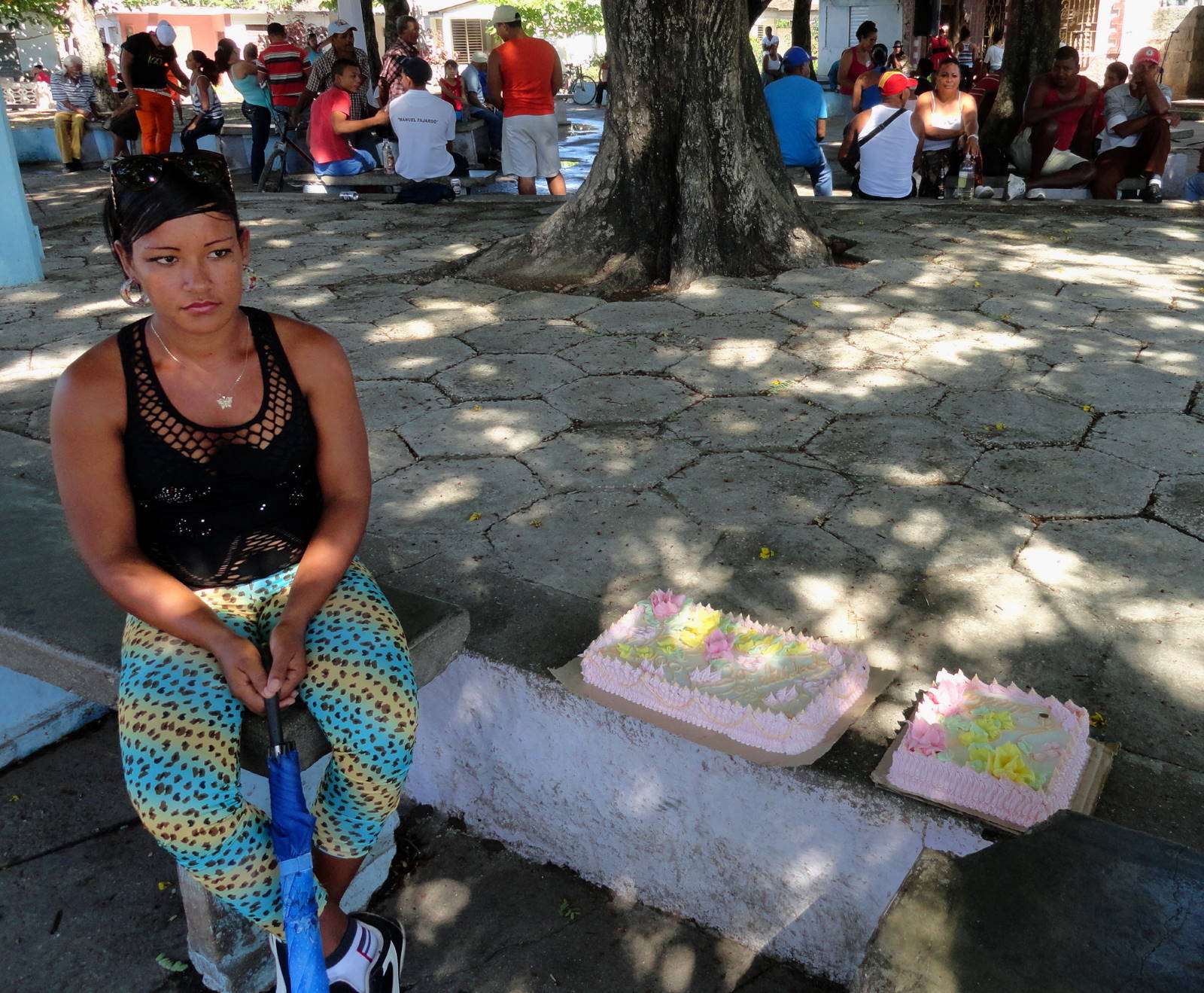 I talked to this young lady about her party cakes (pic). I was happy to realise that my Spanish is getting reasonably good, though I’m rather better discussing food and drink than, say, politics. In Cuba, where many folk are wary of such talk, that’s just as well. Cycling; Cuba; talk cake. Never wrong.

This is Granma province (pic). There’s nowhere quite like Granma: it played a significant part in Cuba’s revolution, being the spot where Fidel Castro, Che Guevara and 82 freedom fighters landed in 1956. Delightfully, the name does apparently come from ‘grandmother’: the area was named after the yacht Granma used by Castro et al, which in turn was named by its US owner, yes, after his nan.

I had fish soup for lunch at a shabby, crumbling cafe, full of old, poor men by the seafront in Campechuela. It was a sobering experience. The soup came in a scarred old plastic bowl that wouldn’t do for a pet in the west, with a battered, rusty metal spoon that would have been thrown away in disgust by a metal detectorist. Including a refresco it was 90 centavos, or less than 3p.

On my way back to the main road I went past long queues of people hoping to buy bread, rice and vegetables. Unlike every other local place I’d eaten, there were no smiles or amiable conversations here. I like the fact that cycle-touring takes you to the real places as well as the honeypots, but I don’t always enjoy what it reveals. 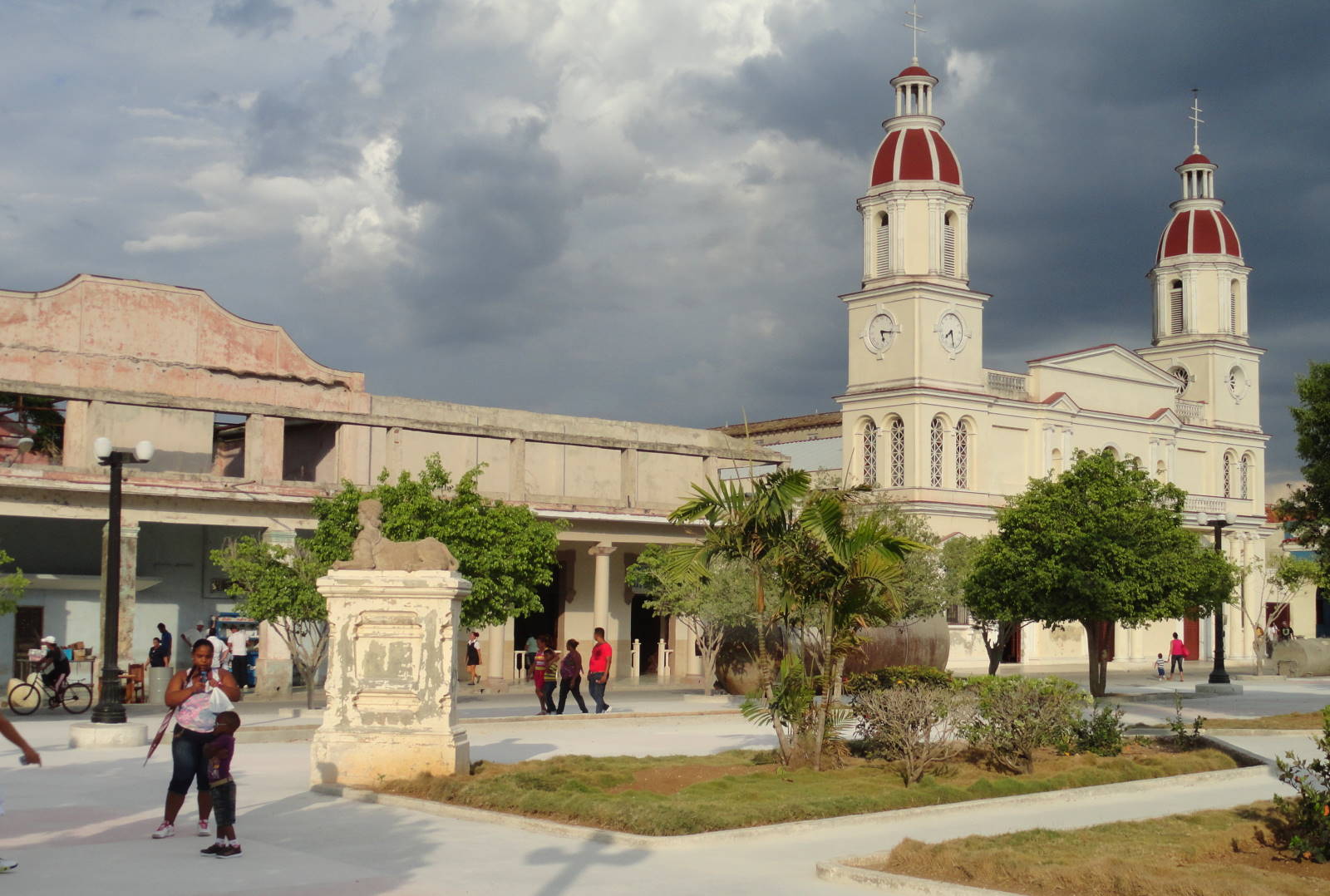 Anyway, I got to my target, the port town of Manzanillo, around threeish. This was altogether brighter and livelier, with a spruce pedestrian centre and some likeable colonial architecture (pic). 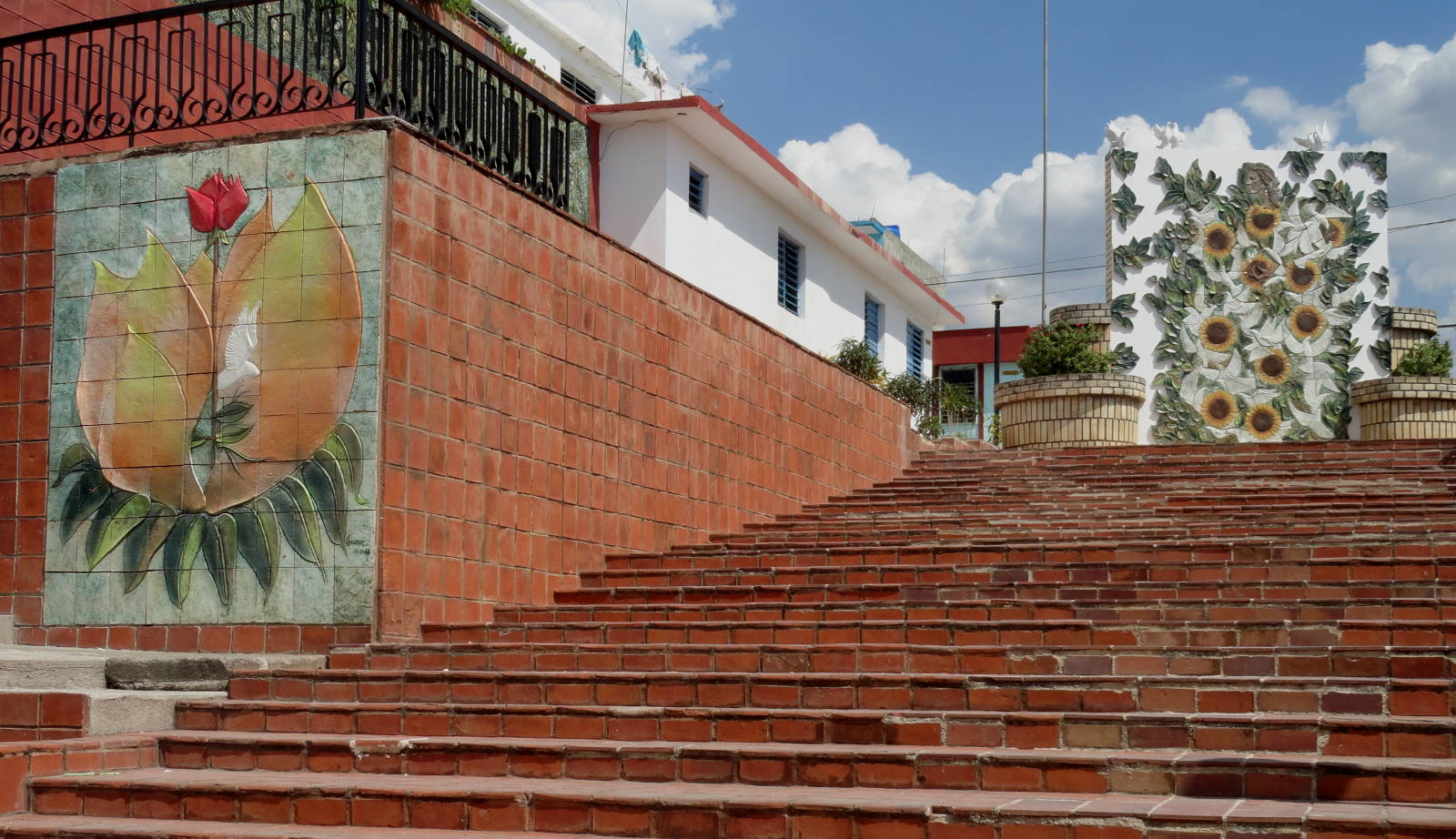 I found a casa right by the steps to the photogenic Celia Sanchez memorial (pic).

It proved the best accommodation so far: $25 got me a lovely, clean, classy double room, a separate lounge with TV, lovely bathroom, a kitchen, a laundry area, even a terrace overlooking the town with ocean views (pic)… and friendly hosts too.

After catching up on emails in the central internet kiosk, I had a couple of beers and a pizza in a restaurant by the main square, and took a can or two back to enjoy on my private terrace. I thought about an early night, but inviting strains of music drifted up from the square reminded me of the guidebook’s promise of the town’s weekly outdoor festival, ‘Street Saturdays’.

I walked back to the centre. It was buzzing, with packed pavement restaurants, bars and kiosks. Picnic tables and seats everywhere were full of locals. A video screen was showing jazz, featuring some legendary musical geniuses. And Sting. Families were out walking and chatting with each other, and there were kids everywhere running around in benign chaos, some enjoying a ride on a goat-drawn cart.

I had an oyster cocktail (spicy sauce, lemon juice) from a stall (2 pesos, TWO PESOS!). I wasn’t sure if I liked it, so I ordered four more to be sure. I hydrated with a refresco or two, and then dehydrated with a large glass of rum. 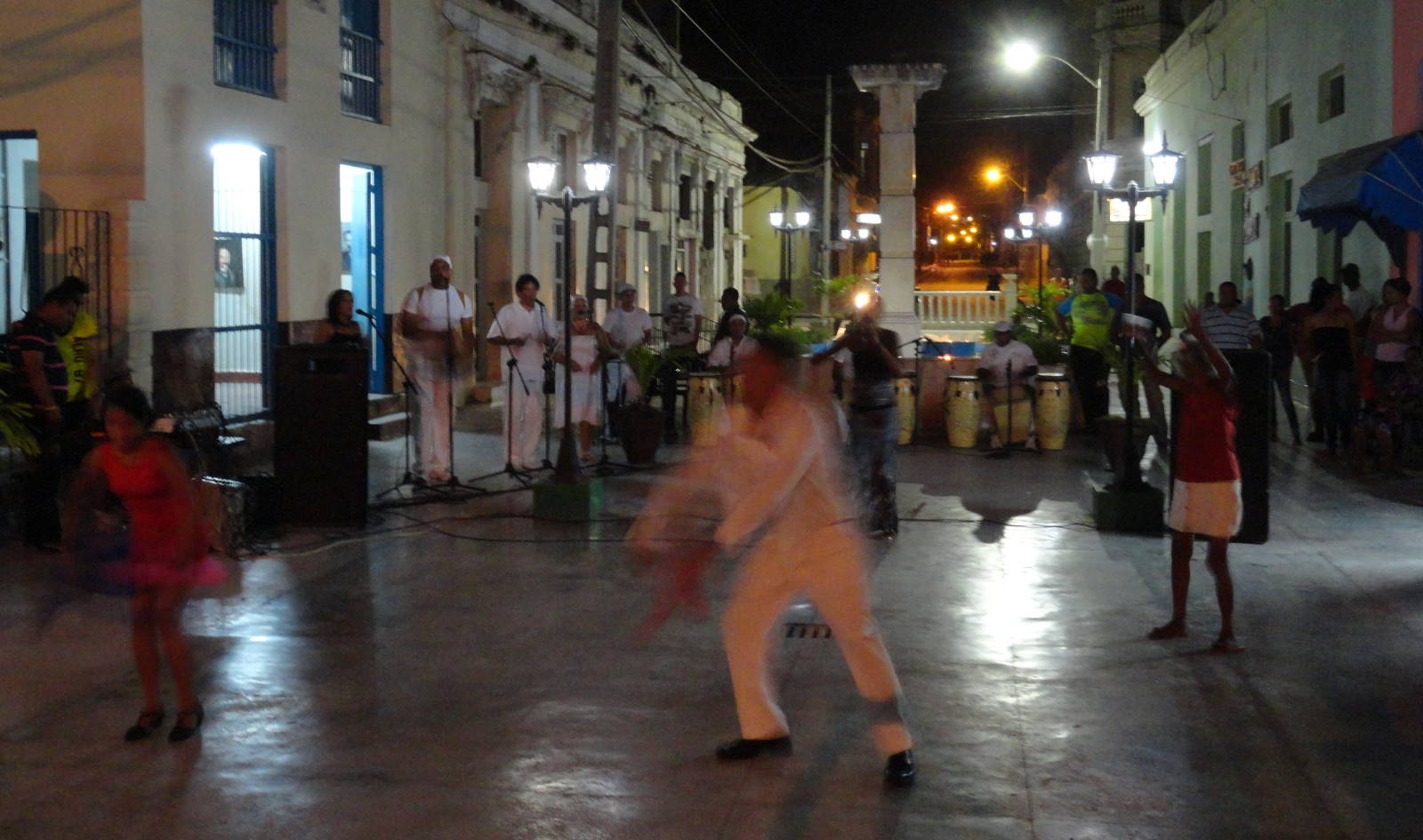 A band was setting up, so I got a couple of beers from the shop and joined the audience on the benches. Wow! As so often in Cuba, even in small provincial towns, the music-making was of superb standard. A folklórico group, local I think, played a mix of African and Spanish-influenced sounds, rhythms and words, accompanied by dancers slinking unphotographably in the warm evening (pic).

And all free, of course. And I was evidently the only foreigner there. I walked back to my casa very happy.