The best day of the trip so far. But it was nearly the worst. And last. 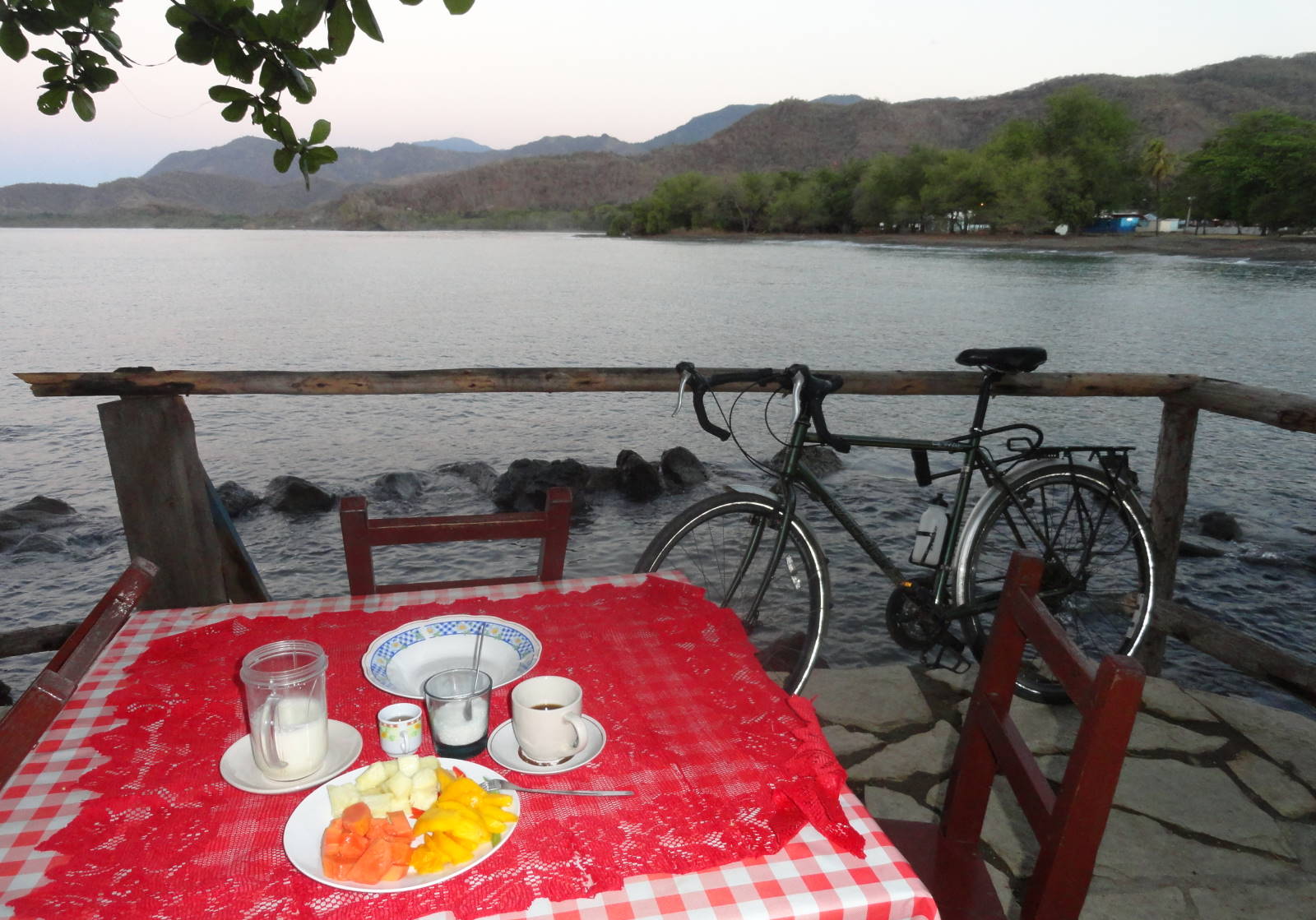 I enjoyed a morning dip and a dawn breakfast of fruit and coffee on the casa’s terrace overlooking Chivirico beach (pic), keen to get going. The sun splashed warm orange on the destination hills and mountains, roughly the same shade my sunburnt face was taking on. 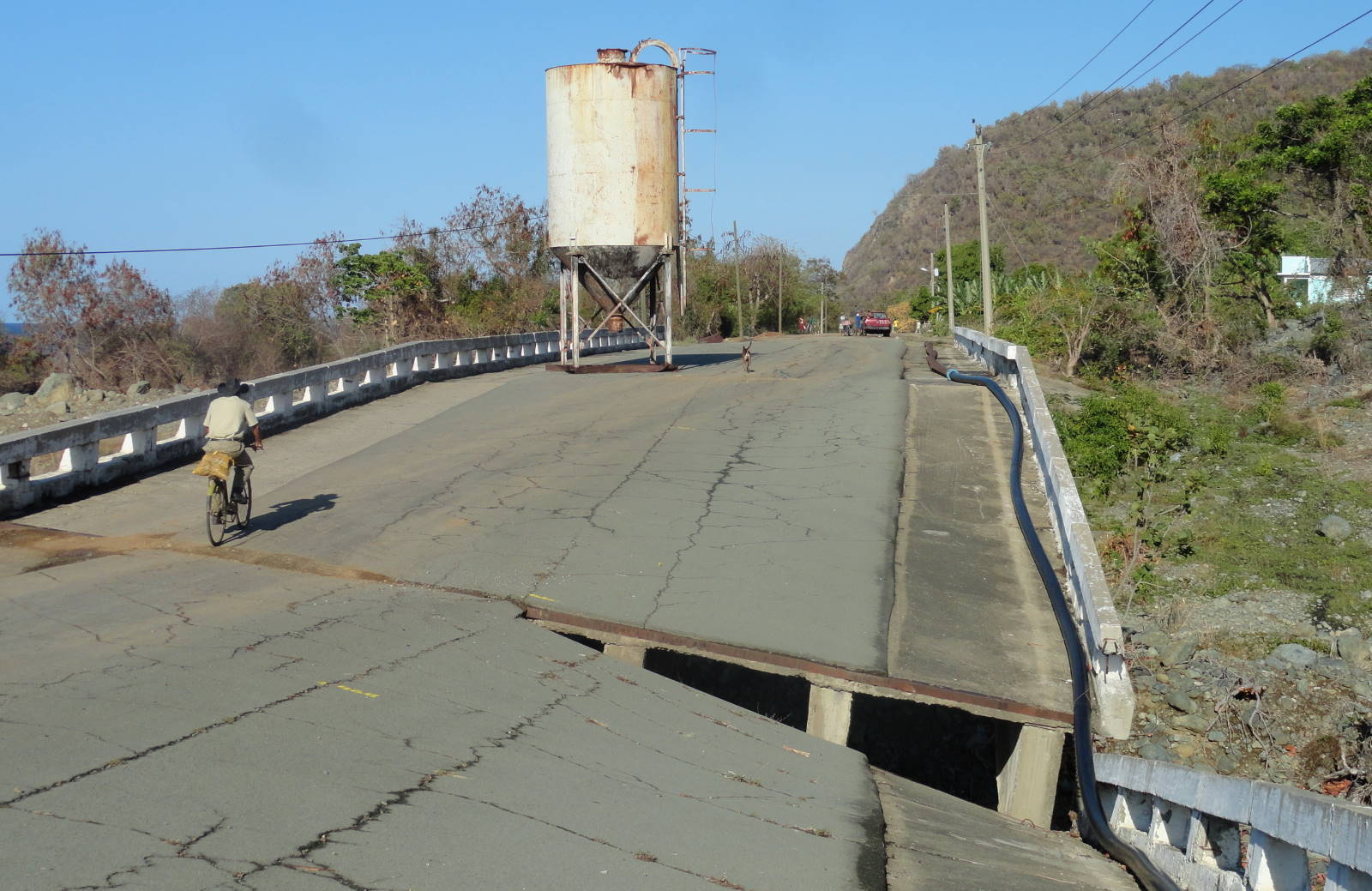 There were a few climbs, and mostly a good surface, with a light breeze behind me. It was still morning when I got to El Uvero 25km or so away, and I was intrigued by the half-broken bridge leading out of town (pic). (It had been wrecked in a hurricane some years before.) I stopped to take a snap, and decided that the composition would improve if I took a couple of steps back.

So I took a couple of steps back. And, to my consternation, about four down. I had planted my left leg firmly onto where the bridge wasn’t: a gap torn in the surface by the hurricane.

My leg disappeared up to the groin down the void, getting trapped between two angled slabs of road surface. My first thought was omigodivebrokemylegaaaargh but as I clambered out with the adrenaline rushing, I thought, I’m damaged but OK…

The leg was heavily gashed, bruised and battered, and felt like a gang of weasels was inside trying to burrow out, but I could just about cycle on. Phew: what if I had broken my leg? It didn’t bear thinking about, so of course I spent the next two hours doing just that. 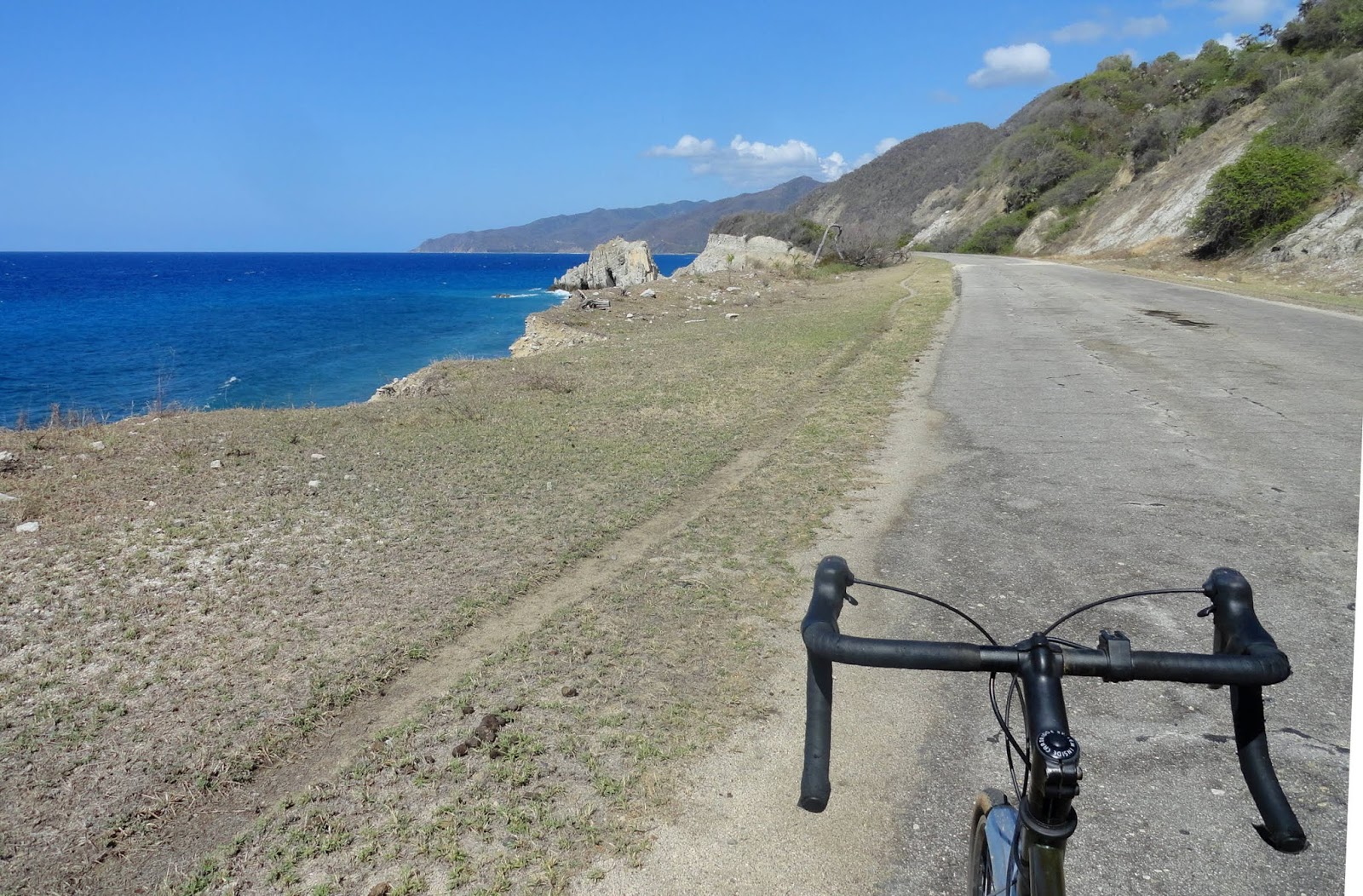 Fugitive mustolids notwithstanding, it turned into a fabulous day of cycling. This stretch of coast road is something rather remarkable in the world: a virtually untrafficked major highway along spectacular coastal scenery (pic). Between Uvero and beyond El Salvial, 50km away, I saw just two cars – though many dozens of walkers, cyclists, horse riders and buggy drivers. 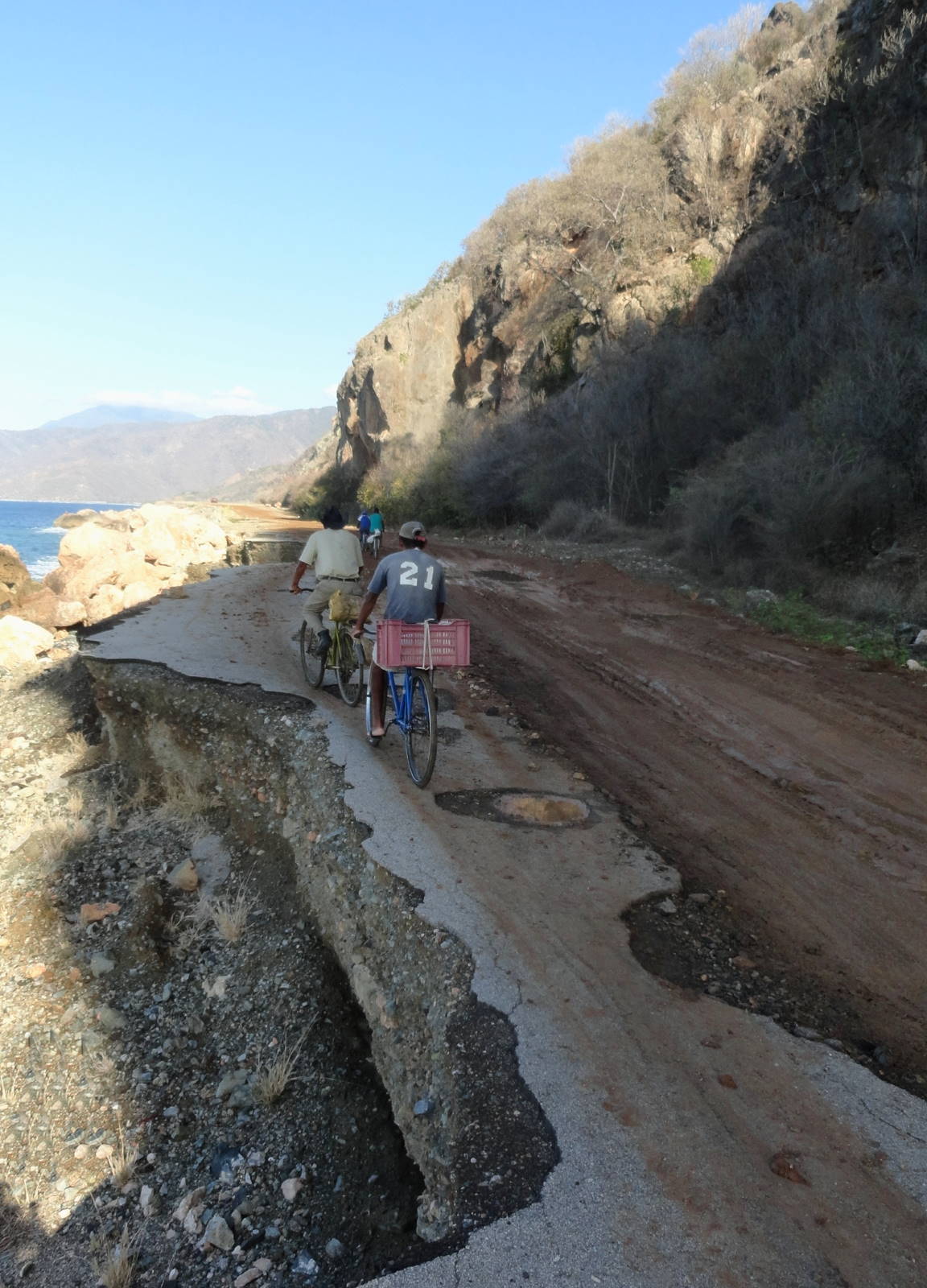 This is why there’s so little traffic. A few storm-damaged stretches are badly broken up, or even missing – virtually impassable to motor vehicles, but perfectly passable for cyclists, especially Cuban cyclists (pic).

The most exciting sections skirted the foot of a crag next to, or slightly in, the waves: the road had long since been eaten by the ocean or gobbled up by Hurricane Sandy. 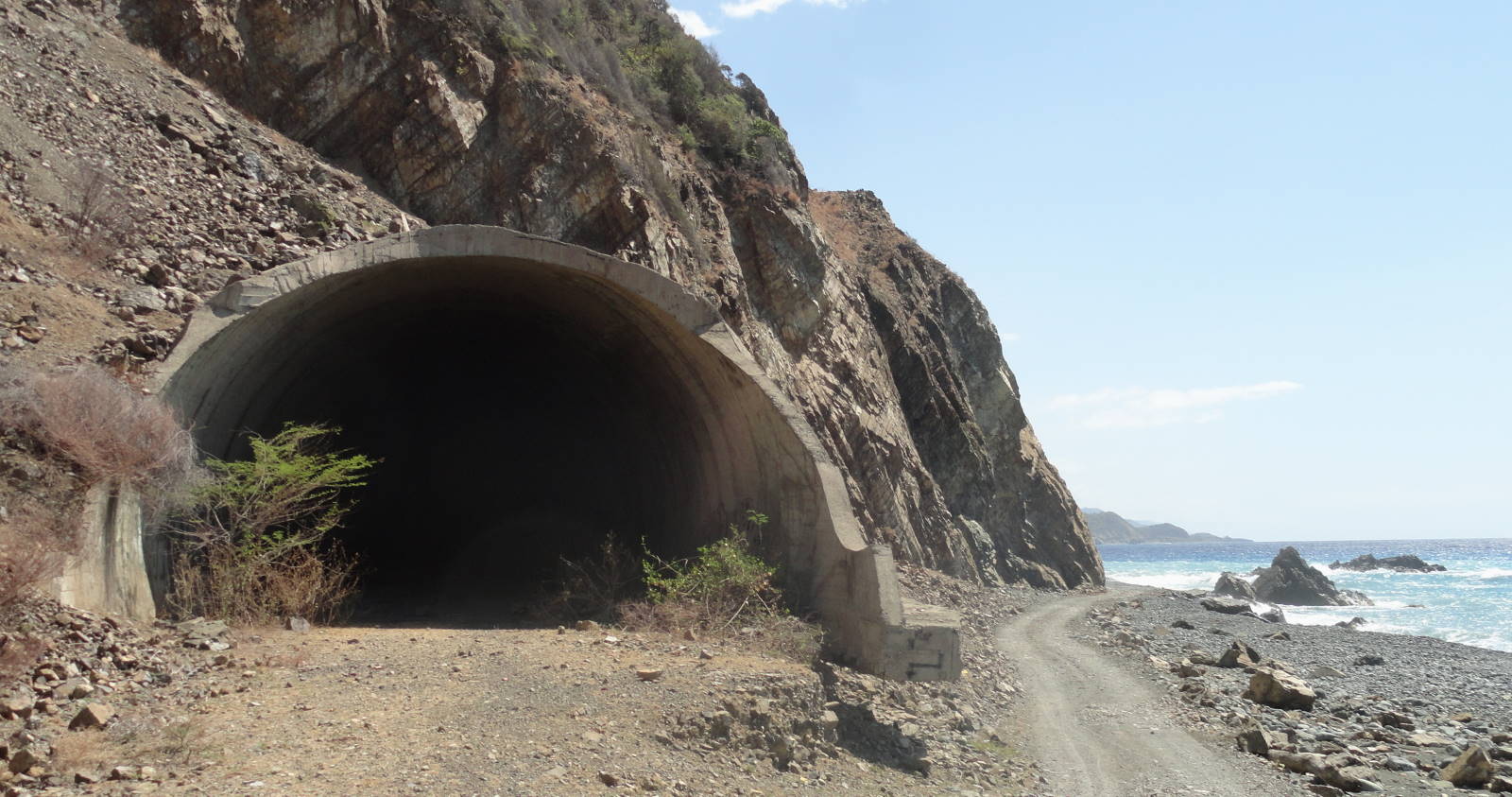 At one point the road did its flirting with the sea in order to reroute around a collapsed tunnel (pic). All a little nerve-racking, but rather thrilling.

At another point, my bike wheels got jammed solid with sticky red mud. It took half an hour to get mobile again, and rather more time to remove the gunge completely. Till September, in fact.

There wasn’t much in the way of villages, and certainly not kiosks, en route (pic). I survived thanks to having stocked up on water and snacks in Chivirico and at a dismal (but friendly) Communist campsite cafe in La Mula. There was a bit of pushing – it was hilly after La Plata – and for half an hour or so I was getting bored with the endless azure sea on the left, mountains on the right, terrible road surface, and uphills. 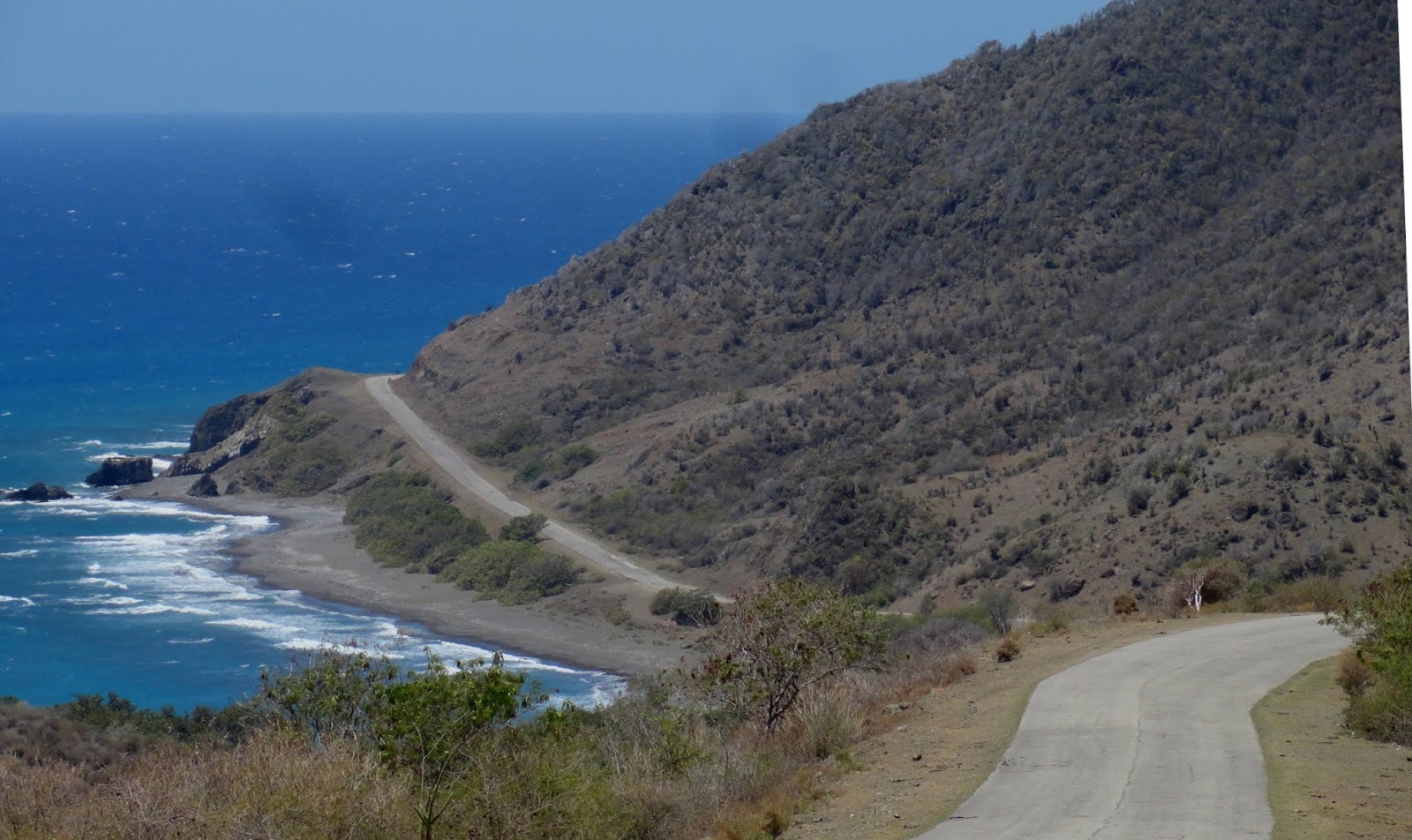 But it all passed, and the final quarter of the day’s 100km was a wind-assisted hurtle on the bike’s top ring along good flat smoothish road (pic) to Pilón, the only place of any size after Chivirico. I whooped with joy. And occasionally with pain, from my troubled left leg. 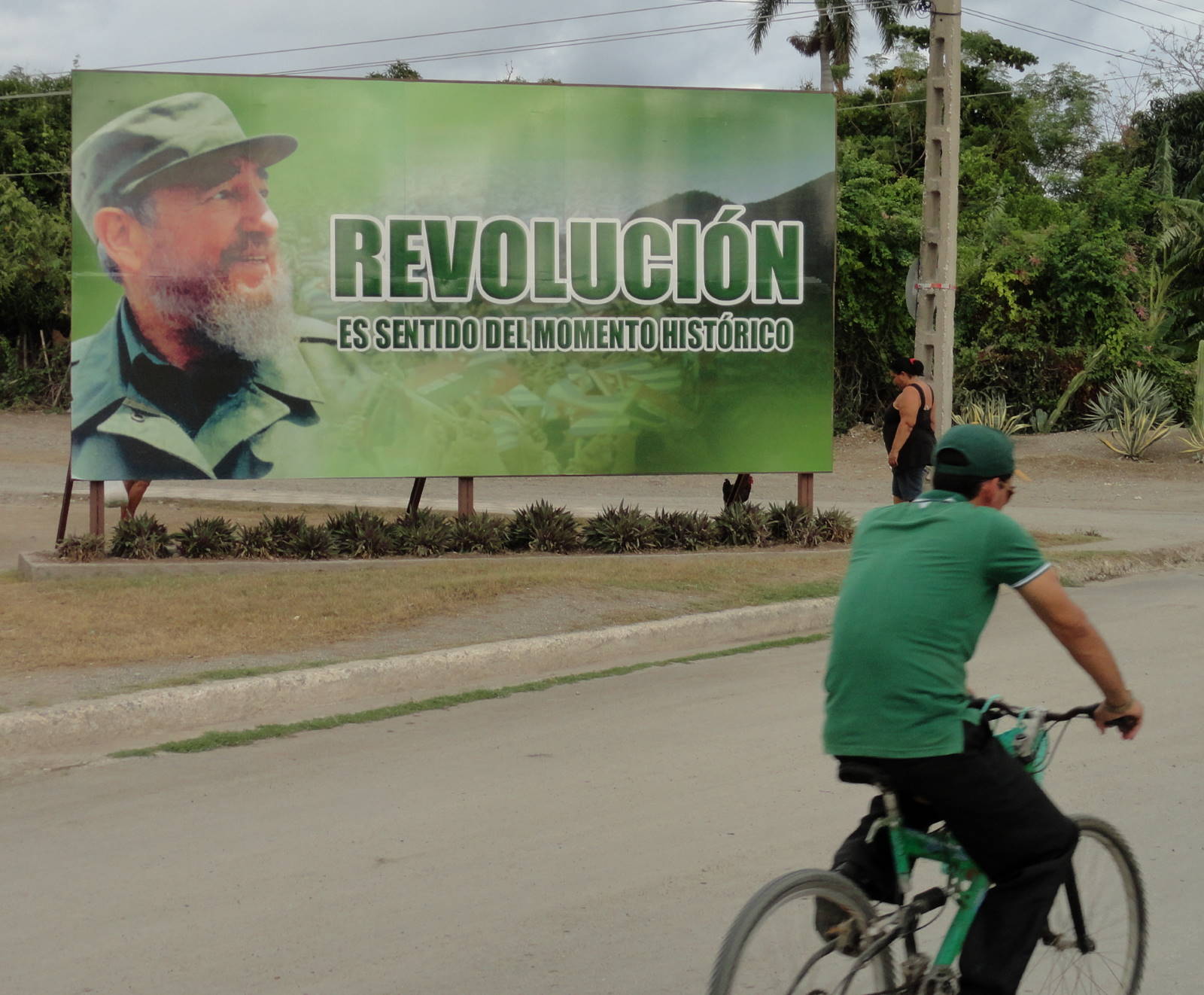 Pilón itself looked dull at first glance (pic), but after a judicious roll and sausage in a cafe on the square, I found a cracker of a casa: a big double suite for $20, with lounge and fridge and bedroom and spare bedroom and shower. I’d already stowed my bike in the owner’s garage, or it could have had a room to itself.

My leg was throbbing, and the most effective treatment was clearly sobriety and rest. So, instead, I went for some beers in the square. I went to the same cafe, which now had a hatch open filling up plastic cups from a keg of Hatuey. A cup was 4 pesos, about 13p, which is my sort of budget. 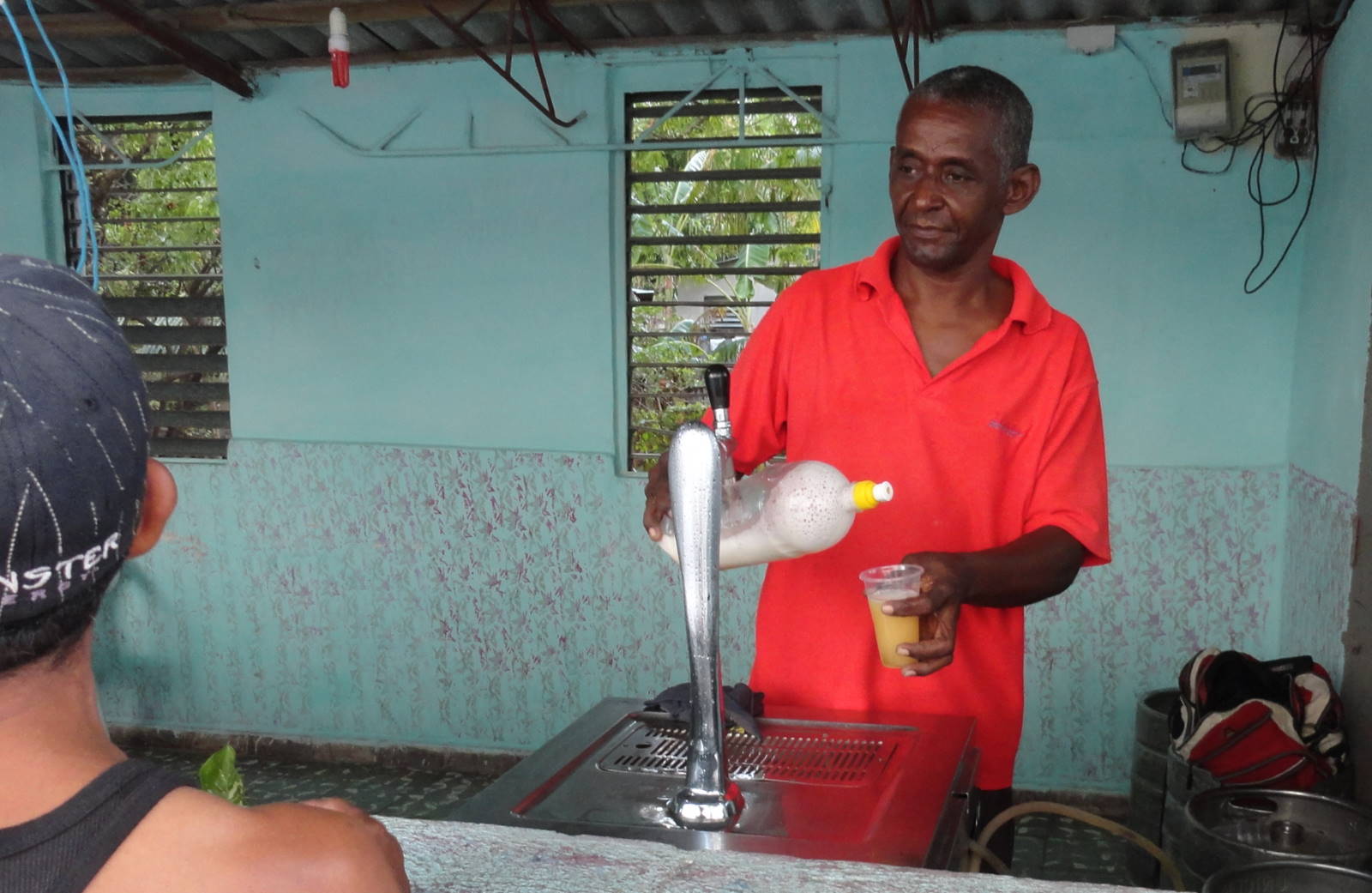 I was intrigued by barman’s technique (pic): pouring first into a horizontal plastic water bottle via a hole in the side, then dispensing it (to minimise froth presumably) into the cup via the nozzle. 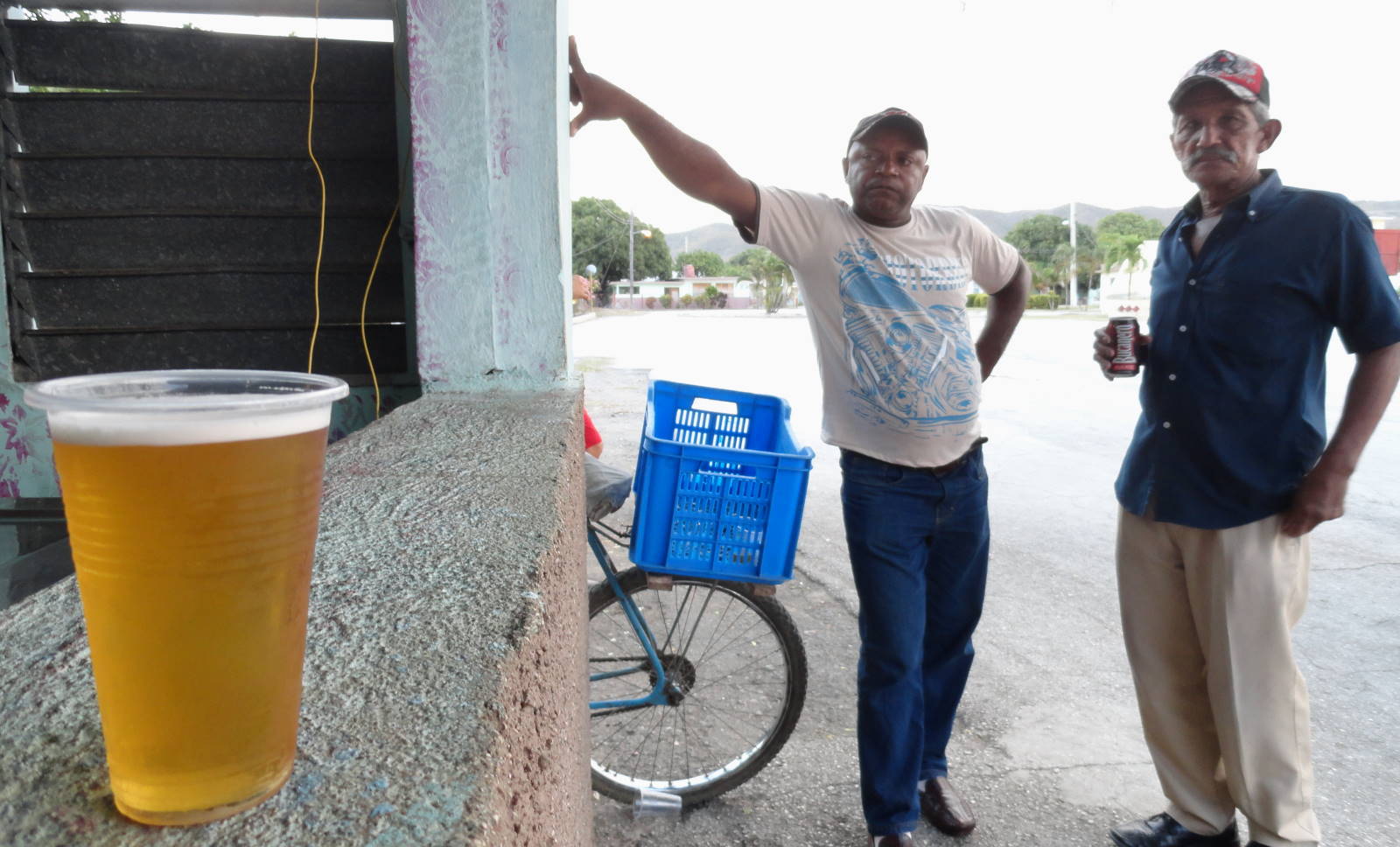 A few local guys were propping up the bar (pic), and we nodded companiably without wasting time conversing, in the manner of local guys in bars across the world. A jinetero (street hustler) on a bike tried gamely, but unsuccessfully, to set me up with a chica. I pretended not to understand over the Communist Party’s martial music blaring over the public loudspeakers, which wasn’t difficult.

So I walked to another less raucous square and put my nose into a church with a lively, packed Good Friday service going on. It was all exuberance and singalong and cheery clapping. I felt uplifted, so celebrated with a couple more beers from the stall.

I found dinner at a palador (a pop-up restaurant in a private house). There were three paladores in the town, but I ultimately decided to eat at this one, after some deliberation, on the basis of it being the only one with any food. The handwritten menu was brief, but I enjoyed a noodly soup, fish loaf in tomato sauce with rice, and fresh fruit to finish, for 23 pesos, which is also my sort of budget. Pleased with this, and happy to absorb the evening vibe of people hanging out in the square with or without bicycles, street games of baseball with sticks, and more loudspeaker music, I had a final cup of beer at the stall (pic), exchanged more nods with the local guys, and hopped home to bed.