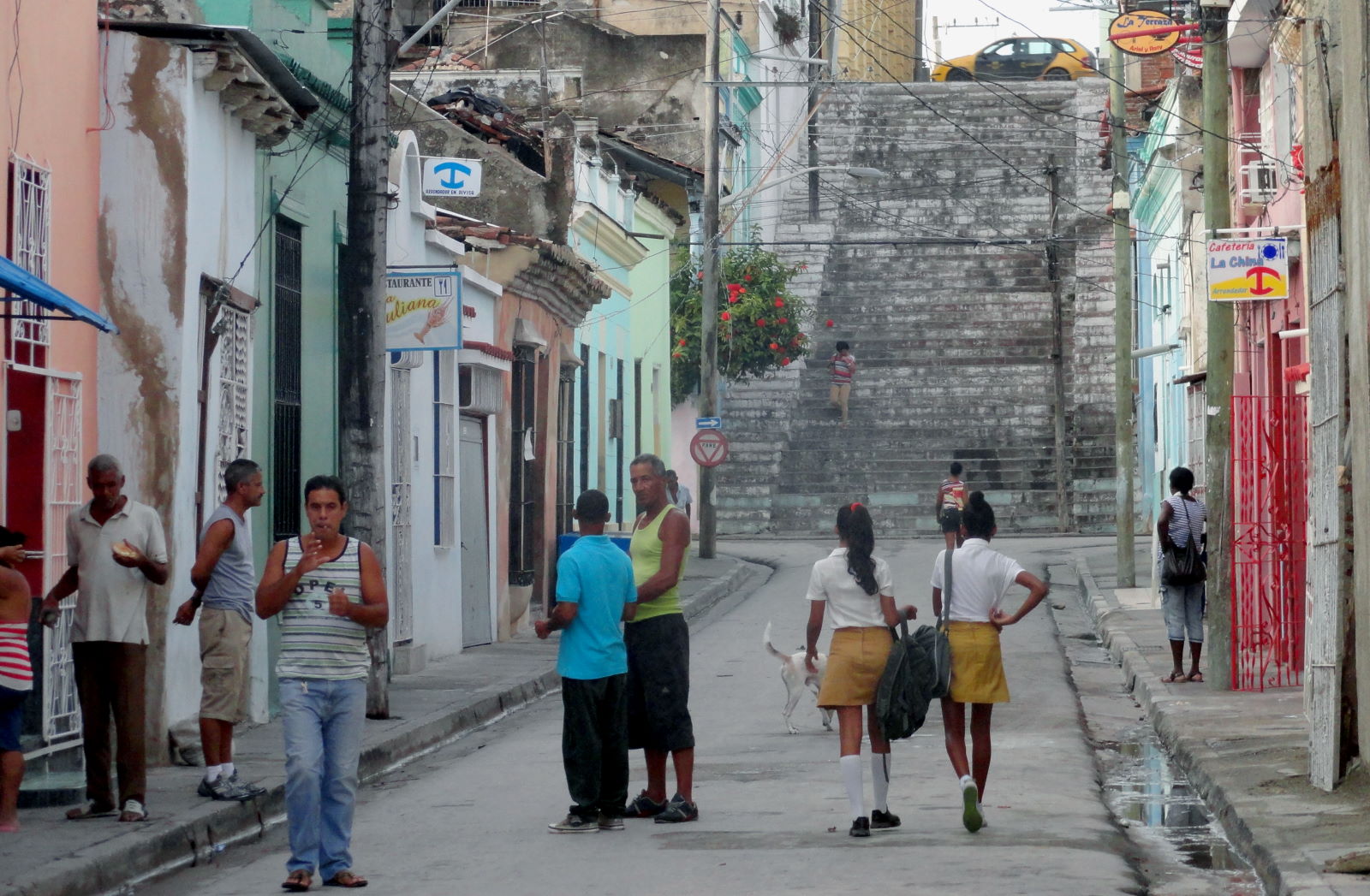 I was up and out at five, and I wasn’t alone. Mornings are warm and street life starts up early (pic), with plenty of peso kiosks open for takeaway breakfast snacks. They’re cheap, unimaginative and simple, but then so am I.

I did the guidebook’s recommended Old Town Walk, on my bike, and left Santiago via the shabby port and industrial area. The streets were busy with people off to work in horse buggies, bicycle taxis, and 1950s motor taxis smoking as if with a bootful of burning tyres.

An hour or so later got me to the coast, on a deserted road that would be (mostly) flat and smooth all day with mountains on one side, sea on the other, the sun on my back, and the occasional crab crossing in front of me. And I was lucky enough to spot something extremely rare in Cuba: a road sign (pic). It was all rather delightful. 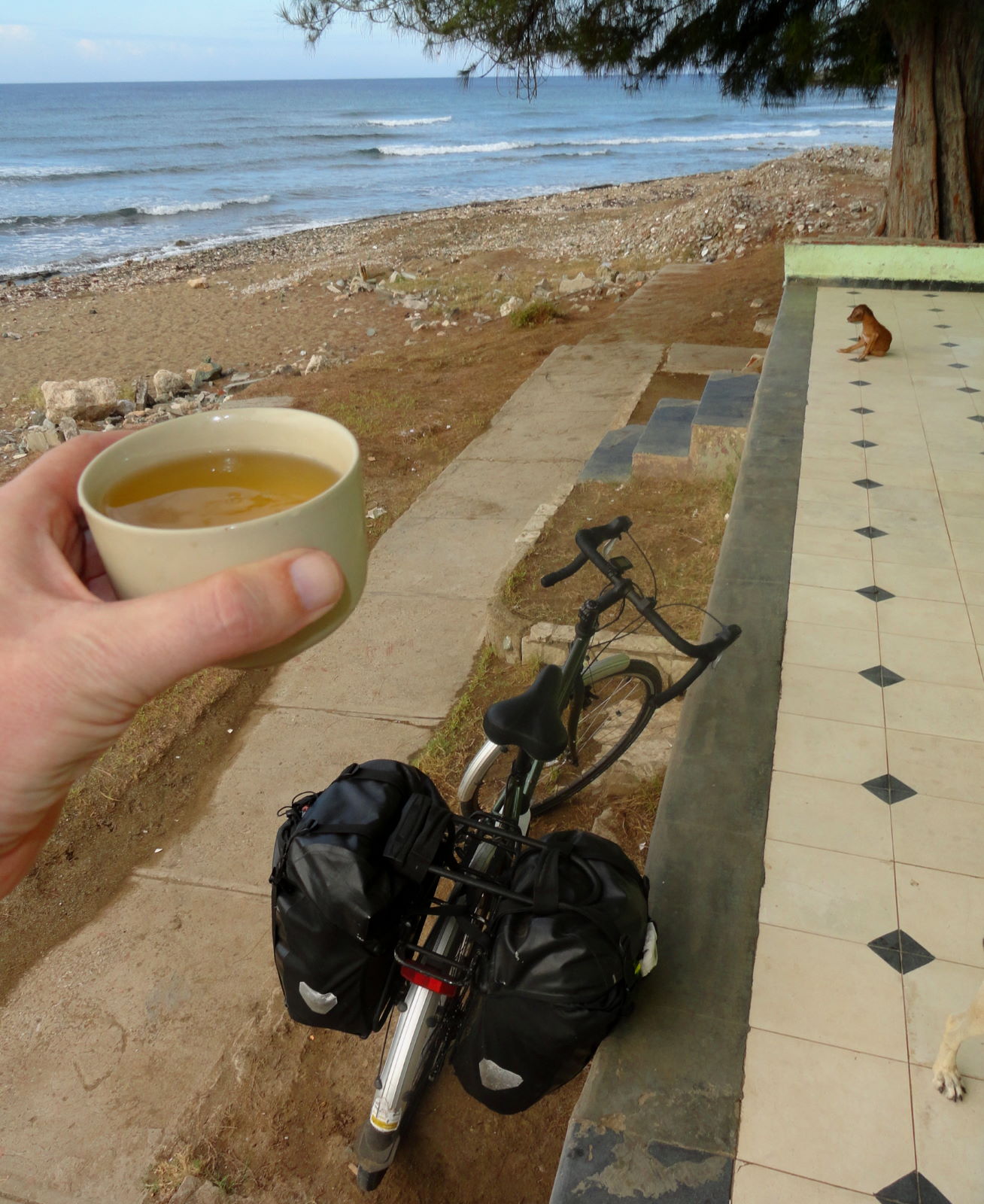 I found a few peso stalls and cafes to snag a refresco or two en route.

They tasted better than they looked. However, they often resembled a sample you’d give a vet – the verdict being that yes, this horse is definitely pregnant – so that’s not saying much (pic).

Still, they were rehydrating enough, and people unfailingly friendly and good-humoured. 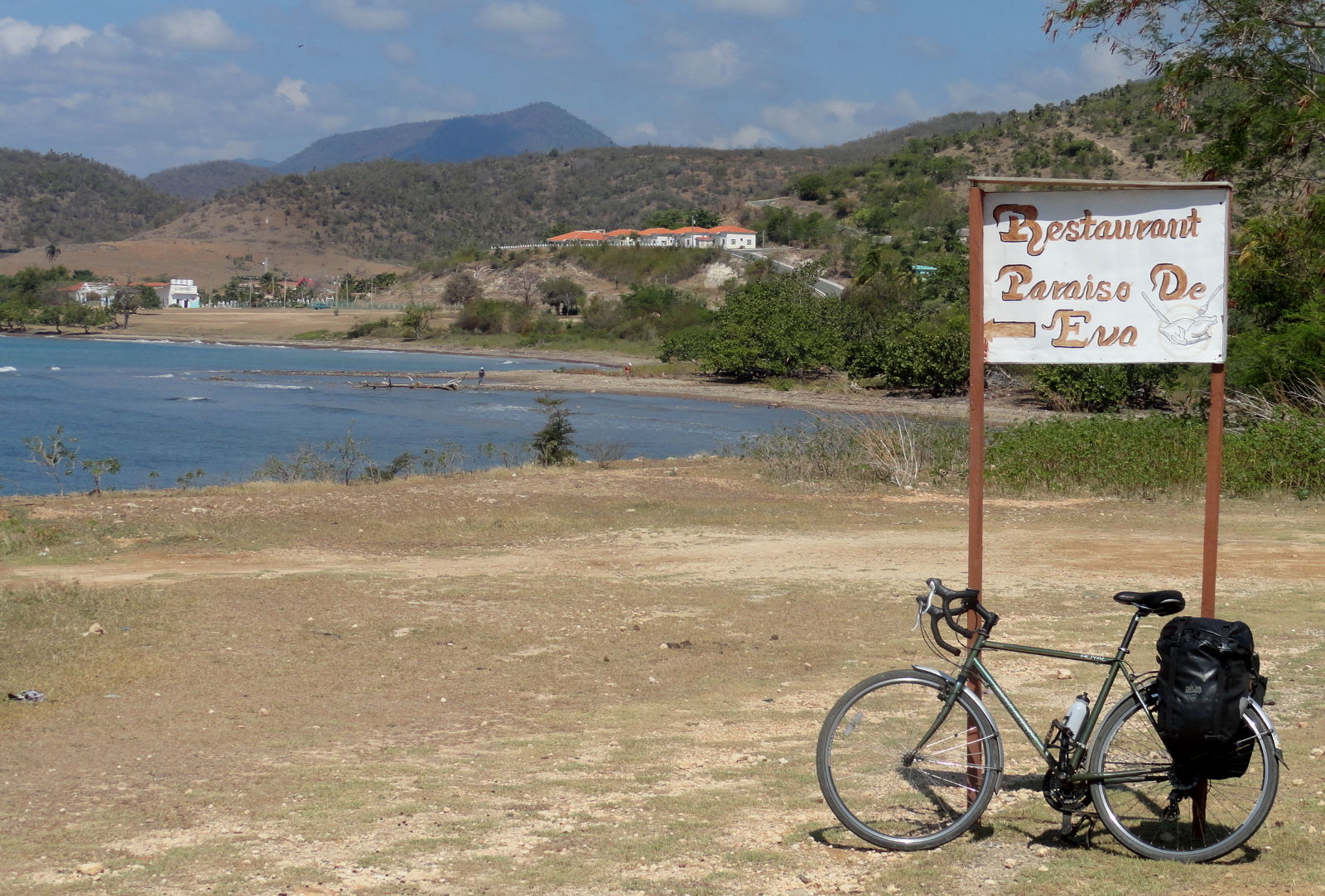 The riding was pleasant (pic), though Cuba’s southeast coast is sparsely developed. West of Santiago there’s a lot of not very much, with even less in between. However, I met my first fellow cyclist of the trip: Dieter, a Swiss guy coming the other way, helmeted and on a front-sus MTB. (That seemed overkill to me at the time – I realised how wrong I was the next day.)

Dieter had interesting things to say about changes in Cuba since he first cycled here ten years ago (global football taking over from baseball as the popular sport, for instance) and the gold-digger thing I experienced yesterday. (He tried to engage in a positive way with the women who pestered him, encouraging them to develop their meagre education and develop skills beyond latching on to foreigners, but noted glumly that this wasn’t easy.)

I arrived in my target of Chivirico at lunchtime, before the afternoon heat. It was a tiny town but with some promisingly shiny-looking shops and a newly painted park. I had a sandwich and refresco at a peso cafe and found accommodation in the usual way, by asking. (There’s officially nowhere for foreigners to stay in the town or anywhere nearby. But ask around discreetly and someone will fix it for you, in that Cuban way.)

A slightly dodgy bloke called Juanito sent me to Pedro, whose friend Eva escorted me to her cousin M—’s place, right next to the pebbly beach and a terrace restaurant. I paid the standard rate for official places – $25 inc breakfast – for an ensuite with aircon by the sea. They were a bit cautious but I reassured them I understood how things work in this country. Which I did, except perhaps for the aircon. 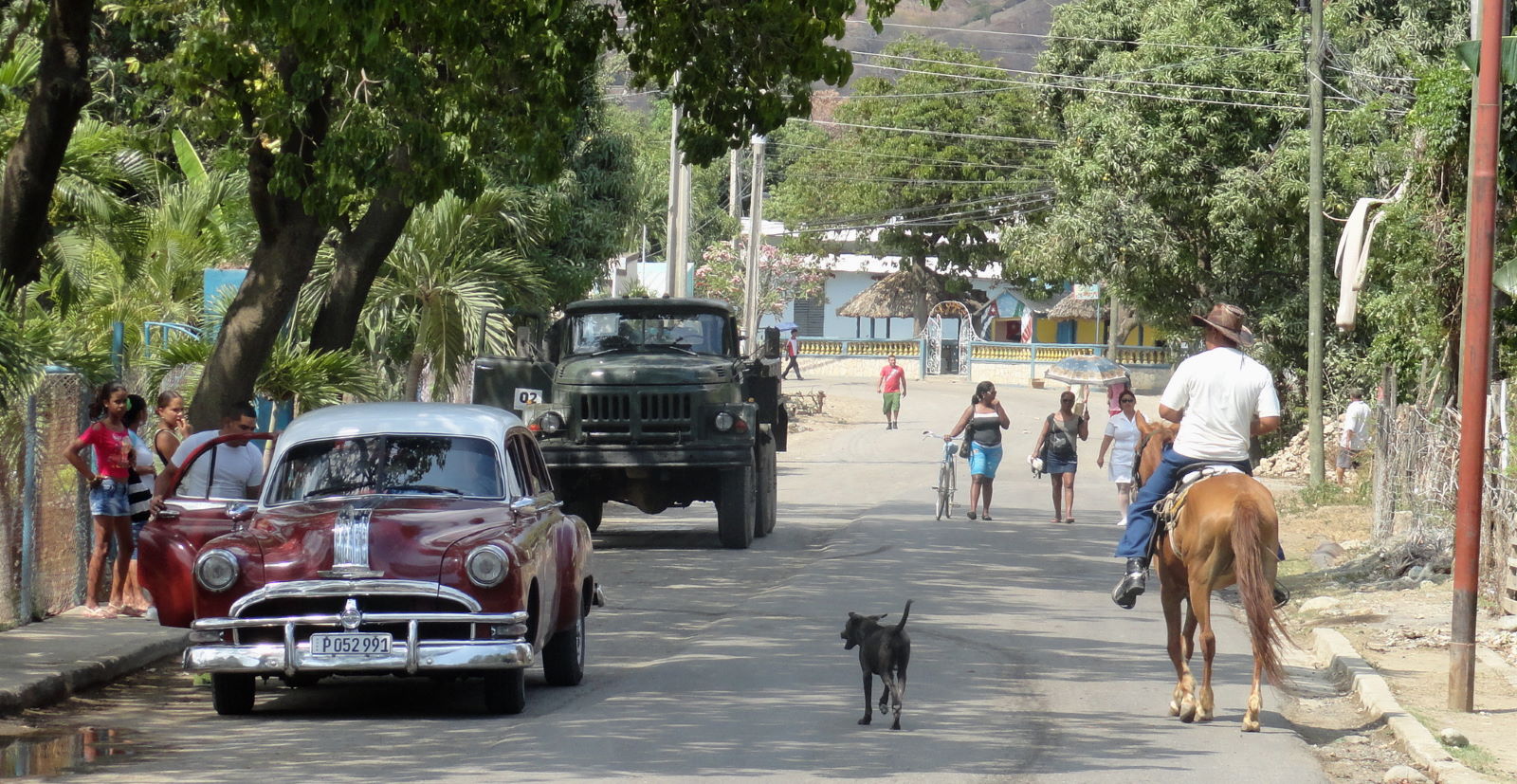 I strolled the town, snacking and chatting with locals in this remote, likeable Cuban town (pic). There were lines of people waiting in the shade for something or other, bus-trucks jammed full of passengers… 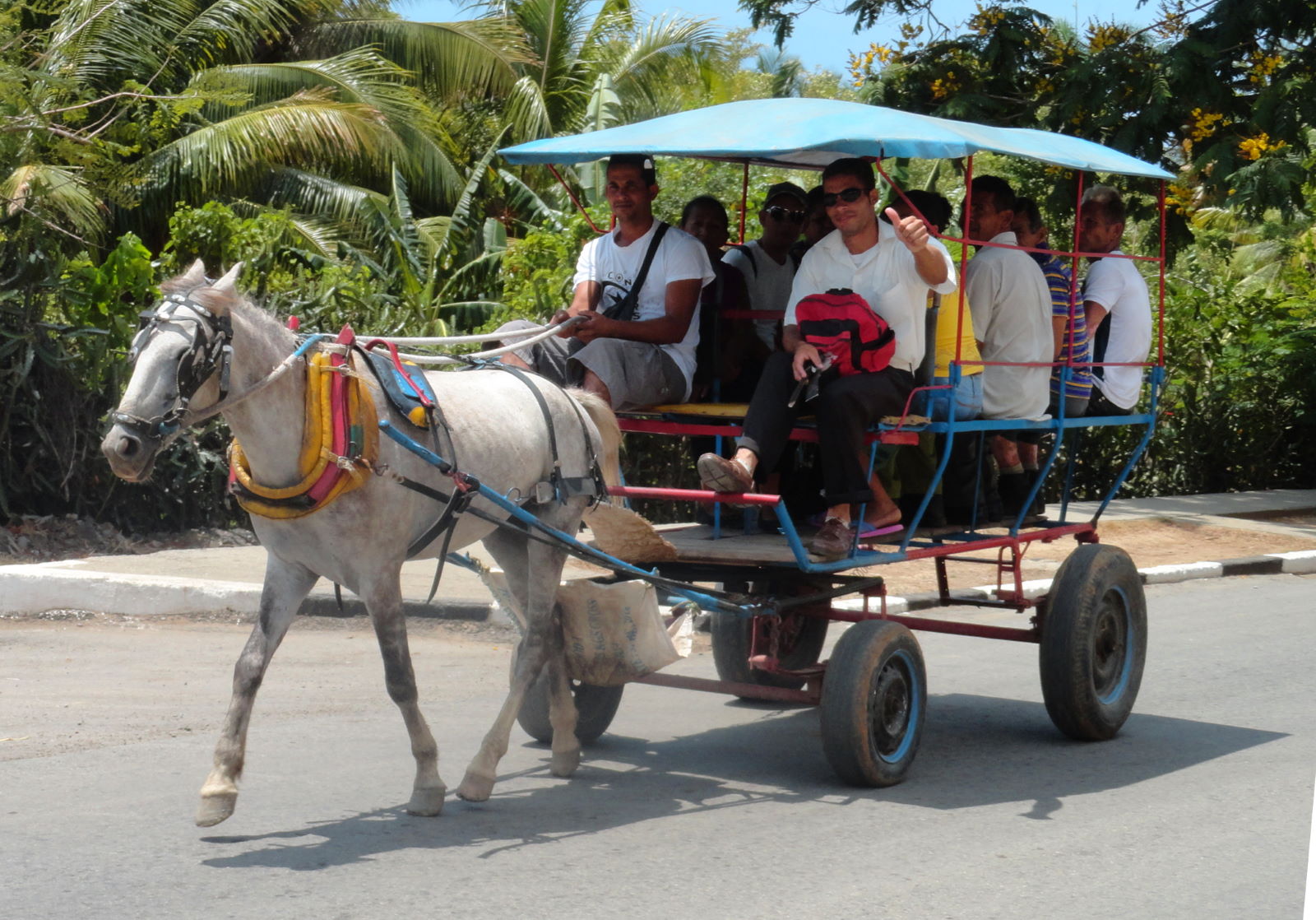 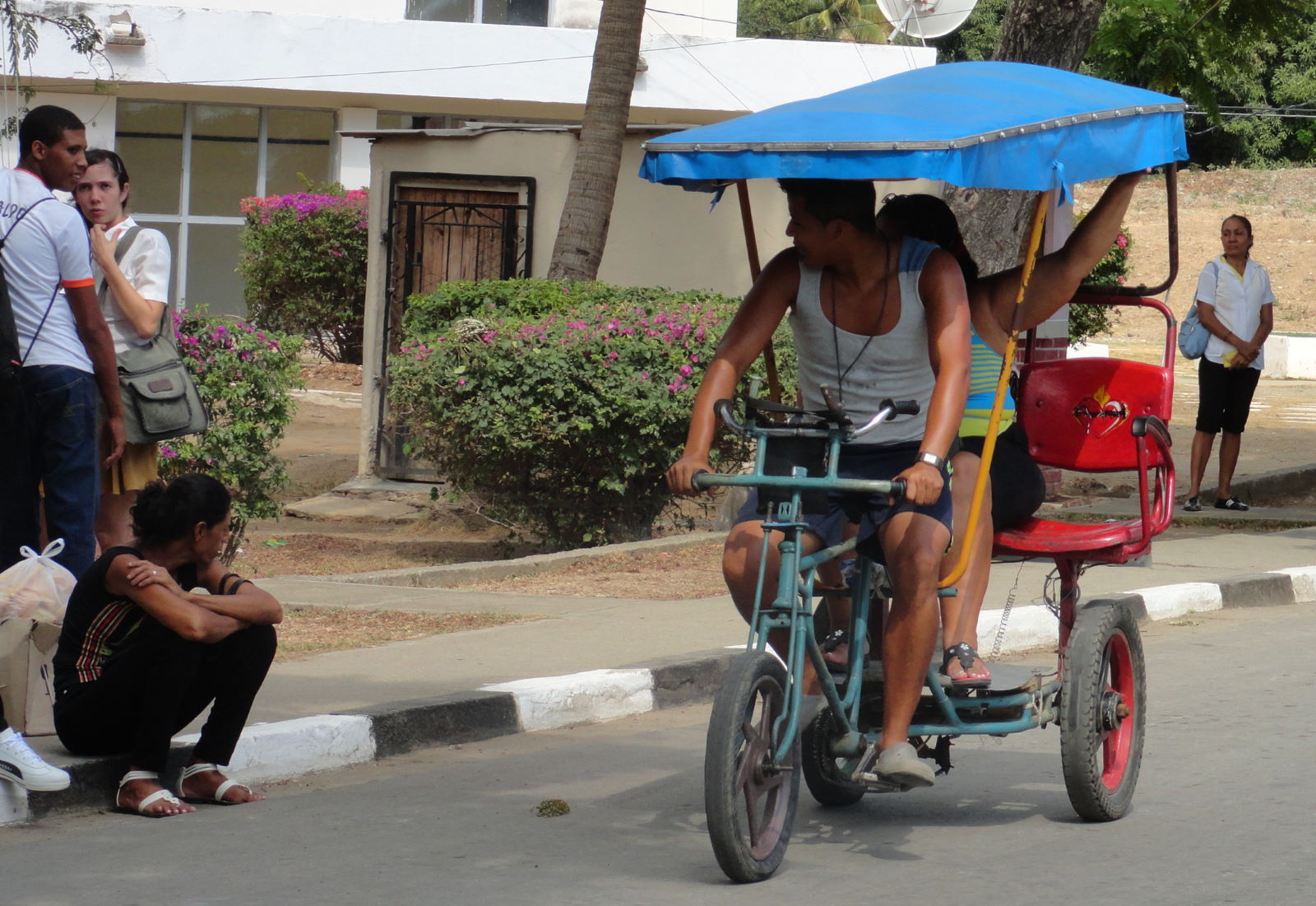 Back at my casa I had a quick afternoon dip in the Caribbean, pleased that my trunks were used at last. Beach security is normally a problem travelling alone, though in this case my accomm was on the beach itself, and Cuba is, of course, about as safe to cycle-tour as anywhere in the world. Barring your own carelessness, of course, as I was to find out tomorrow…

Anyway, another tropical downpour kept me indoors till six. I ambled to the caff on the square for a curious plate of beeflike goat chunks, or possibly goatlike beef chunks (20 pesos), and three small Hatuey bottled beers (10 pesos each). Hatuey tastes like cheap lager adulterated with cheap cider, so it was refreshingly familiar.