I’ve done End to Ends of Britain, England, Scotland, Northern Ireland, the Republic of Ireland, even the Isle of Man.

Not Wales though – well, not exactly. I did Cardiff to Holyhead in 2000, and St David’s to Llandudno in 2013, both of them traverses of sorts. That first trip was along the Lôn Las Cymru, a 250-mile odyssey across Wales’s scenic splendour, but back then I saw little except rainclouds and my own sodden feet.

For my 2020 Cambrian alpha-omega, I thought I’d reprise the Lôn Las Cymru – but take the variant beginning in Chepstow instead of Cardiff. This, I decided, has more of an End to End feel. Chepstow to Holyhead; southeast to northwest; bottom right to top left; English border to the ferry gateway to Ireland.

So this morning I got a train from York down to Chepstow. The day promised to be cloudless and sunny, with no forecast rain. Cow meteorologists had no excuse for lying down in the lush, late-summer meadows.

At first I considered starting at the Welsh–English border on the Severn Bridge. But I’ve cycled across it before, and anyway thought Chepstow’s old bridge across the Wye – on the edge of the fine old town, rather than on the edge of the motorway services – would be a more atmospheric way to set off. 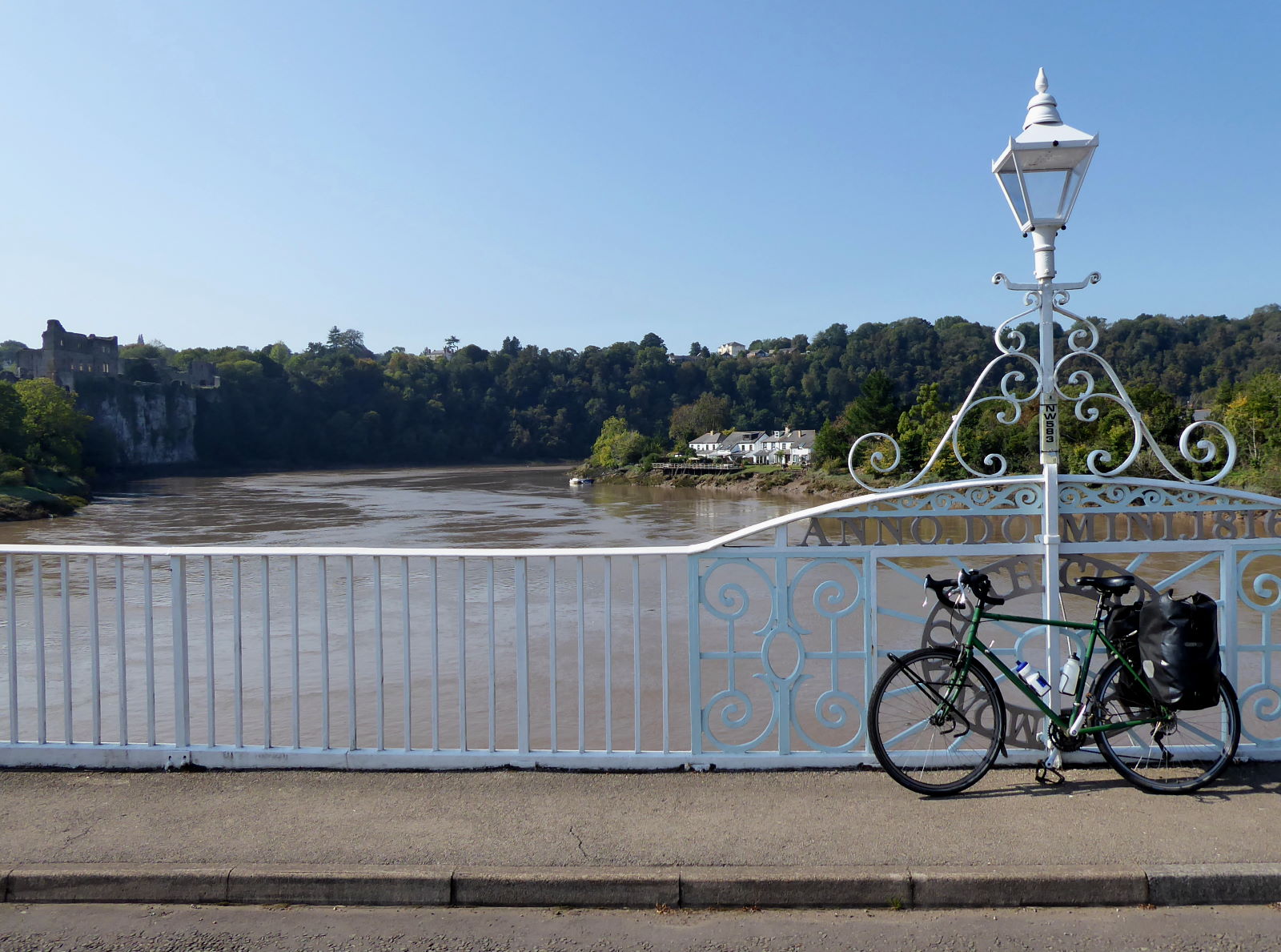 So this is where Wales starts, at this lamp post, with the castle ruins in the background (pic). How many Welsh people does it take to change a light bulb? One, probably. You’ll get no tired old racist jokes here. Just tired old non-racist ones. 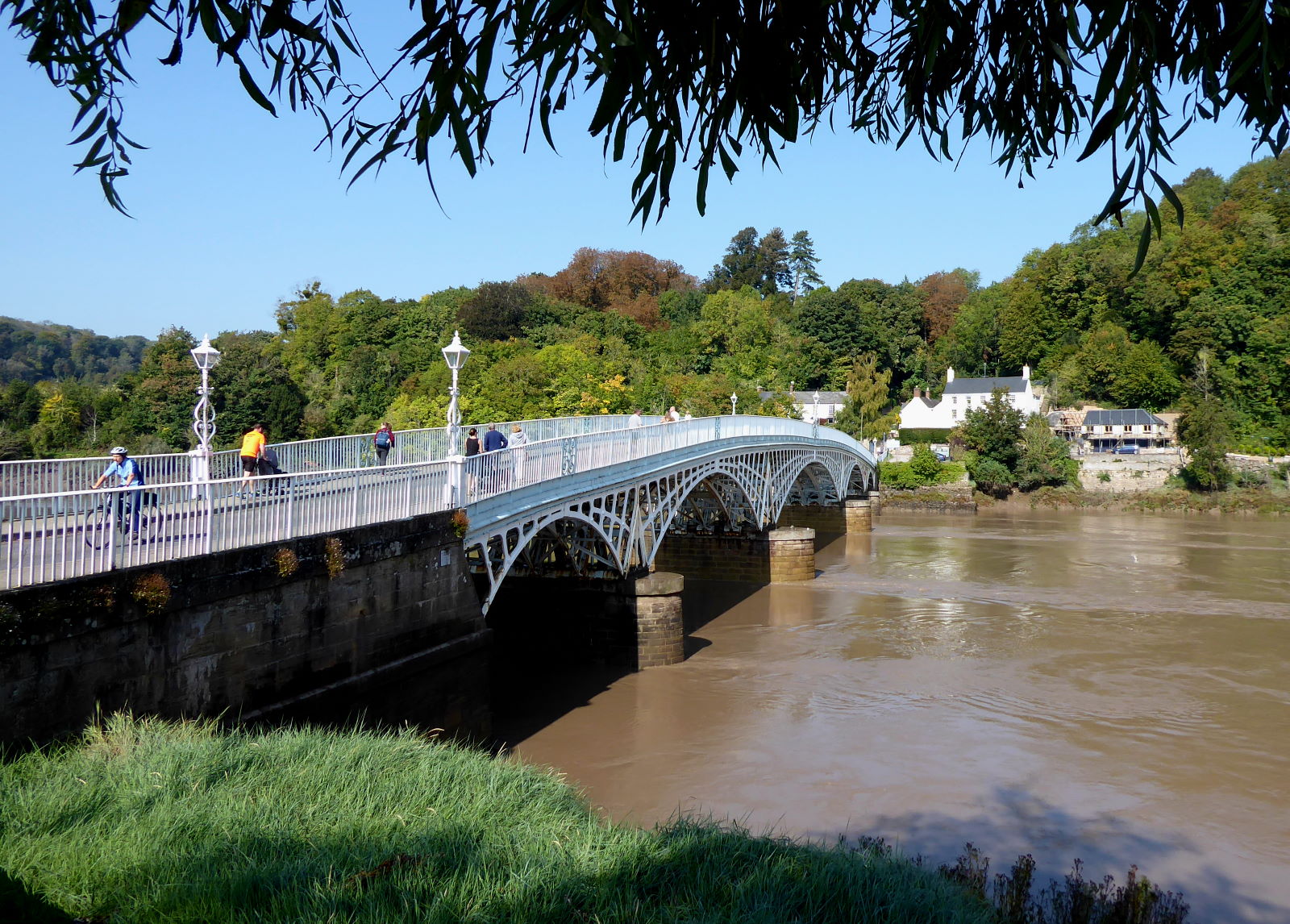 Anyway, here I was actually in Wales (pic), land of poets, singers and men of renown, and in the exciting new presence of bilingual signs. It’s amusing to see a clumsy, weirdly spelt, unpronounceable chimera of a language – essentially a degraded pidgin, actually – festooning posts and notices. So I was relieved to see there was now the Welsh alternative, too. 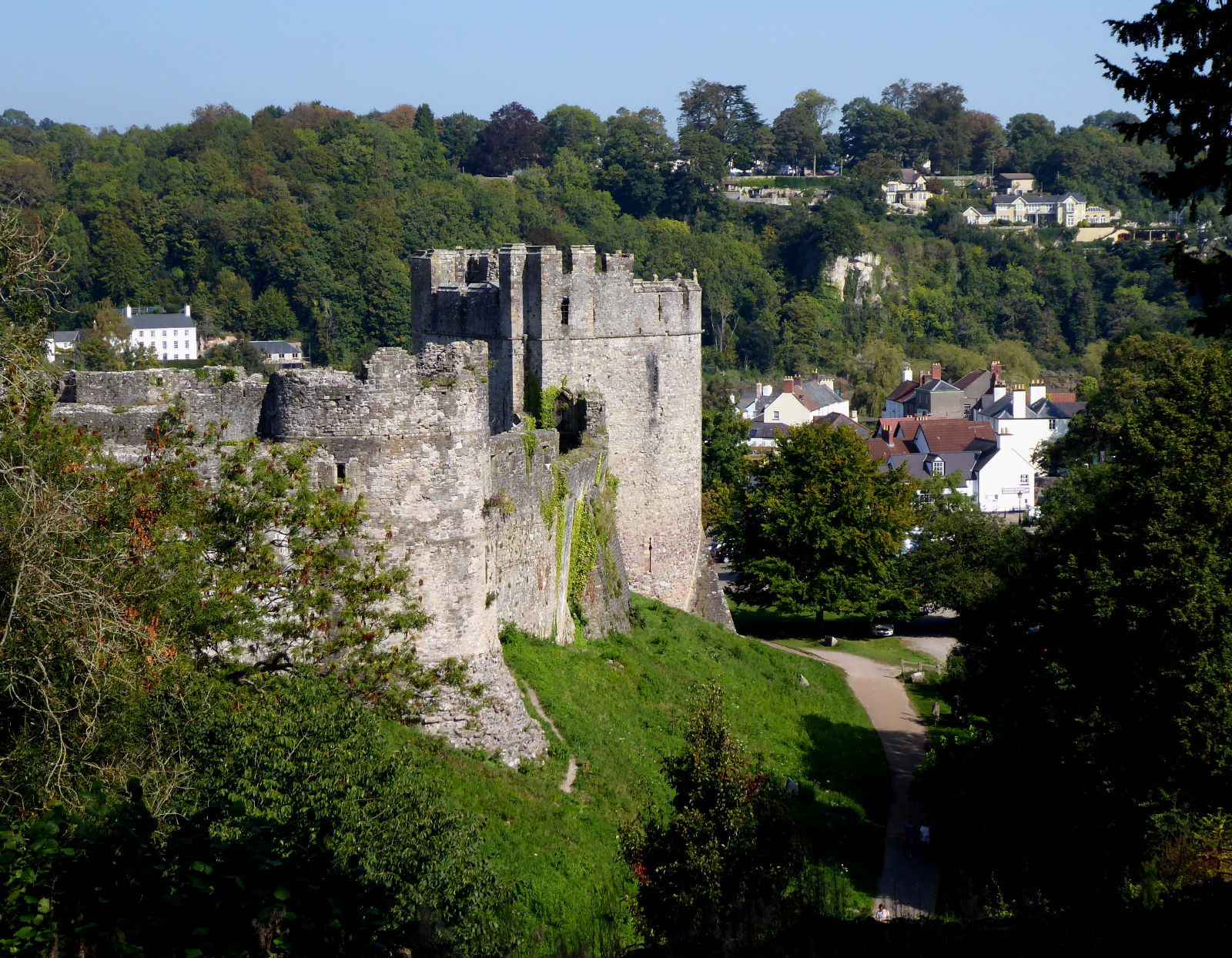 Chepstow is a pleasant town, smaller-feeling than I expected, though I still managed to get lost in the one-way system. I briefly admired the castle (pic) and set off into this fabulous, fascinating little land along quiet, lushly rural back lanes. 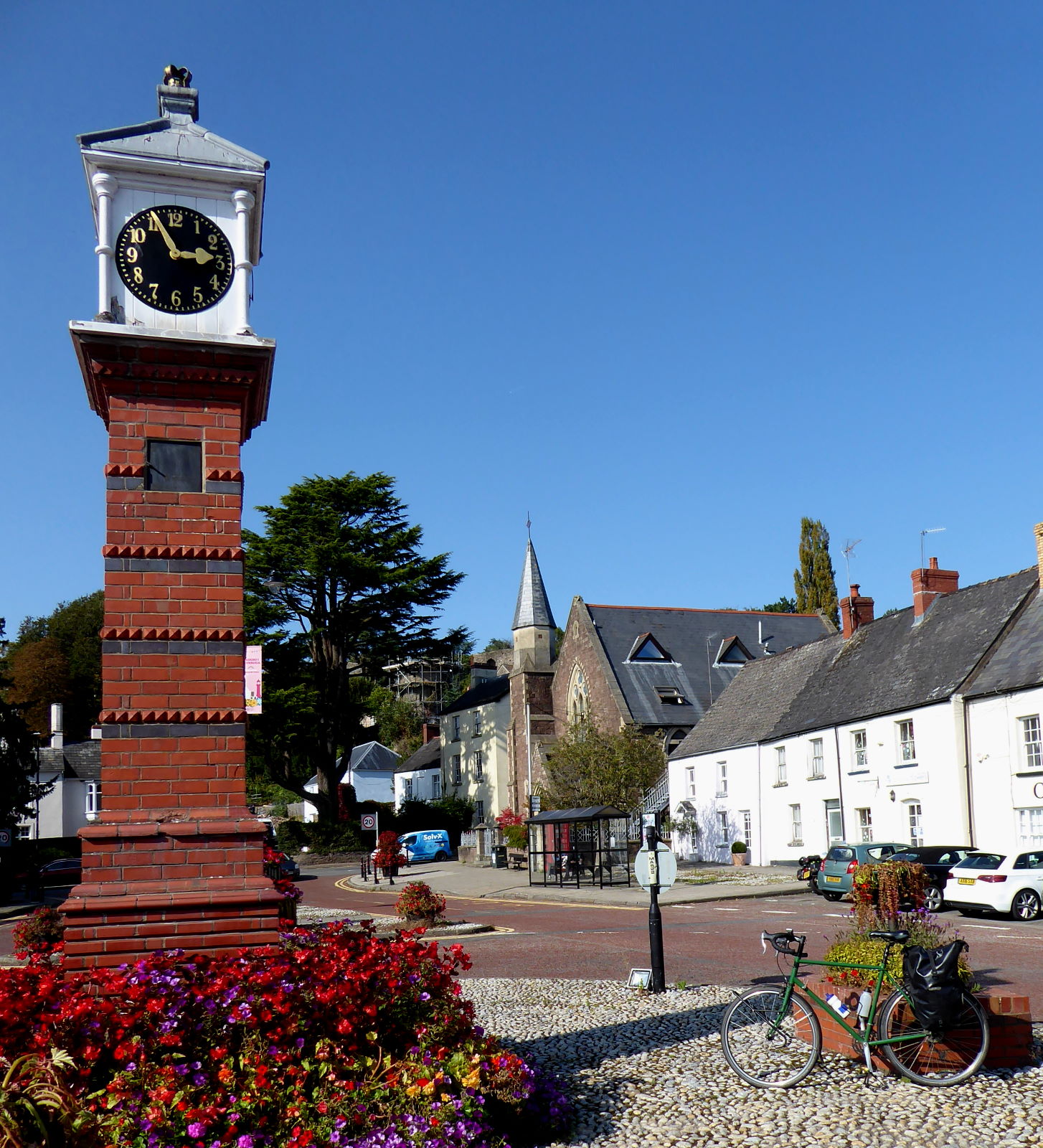 I stopped at Usk, town of flowers, for a picnic lunch. The central square (pic) had no shade and was a sun-trap, as I found when my packet of twelve jaffa cakes turned into a packet of one long jaffa cake. 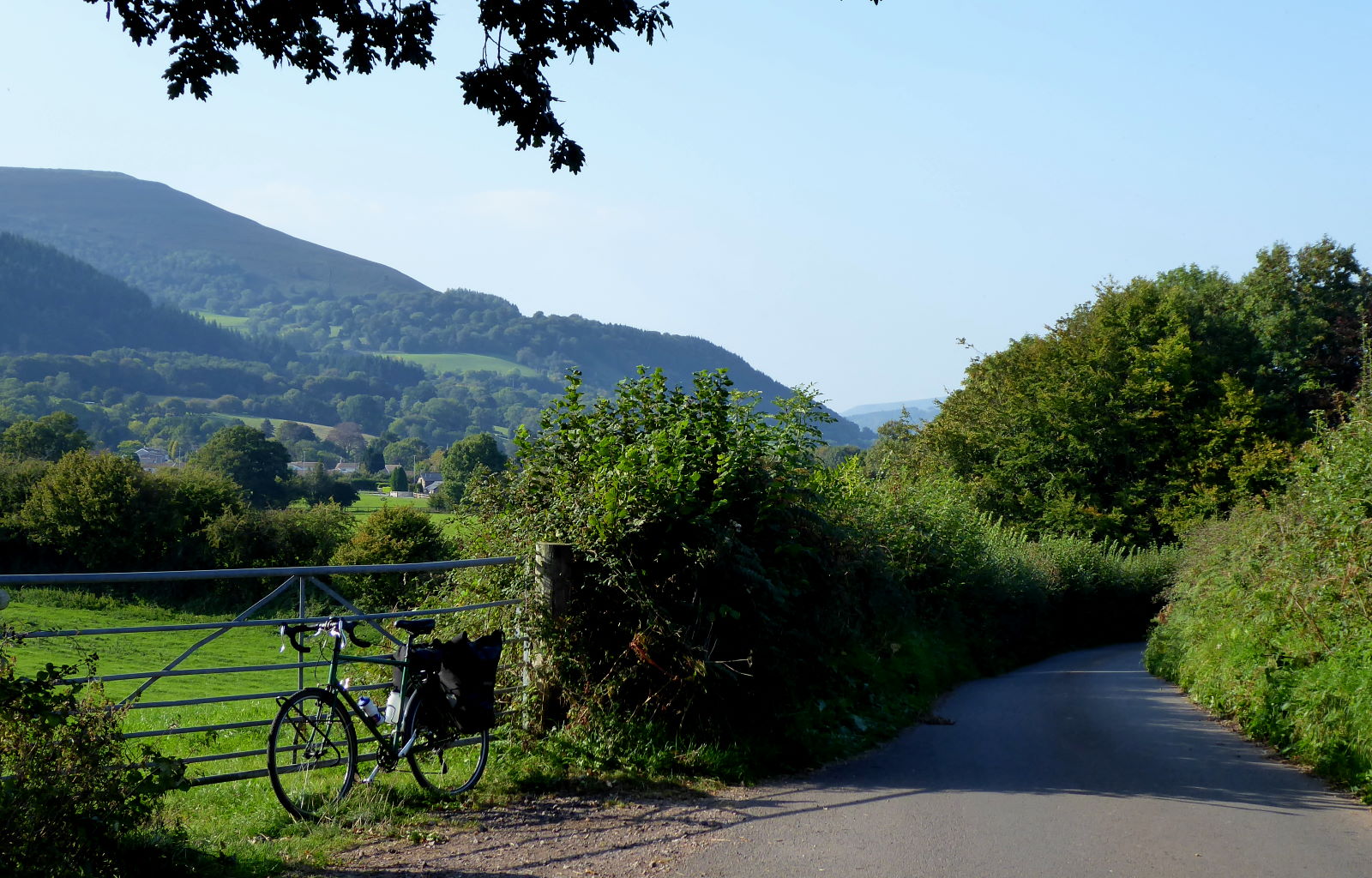 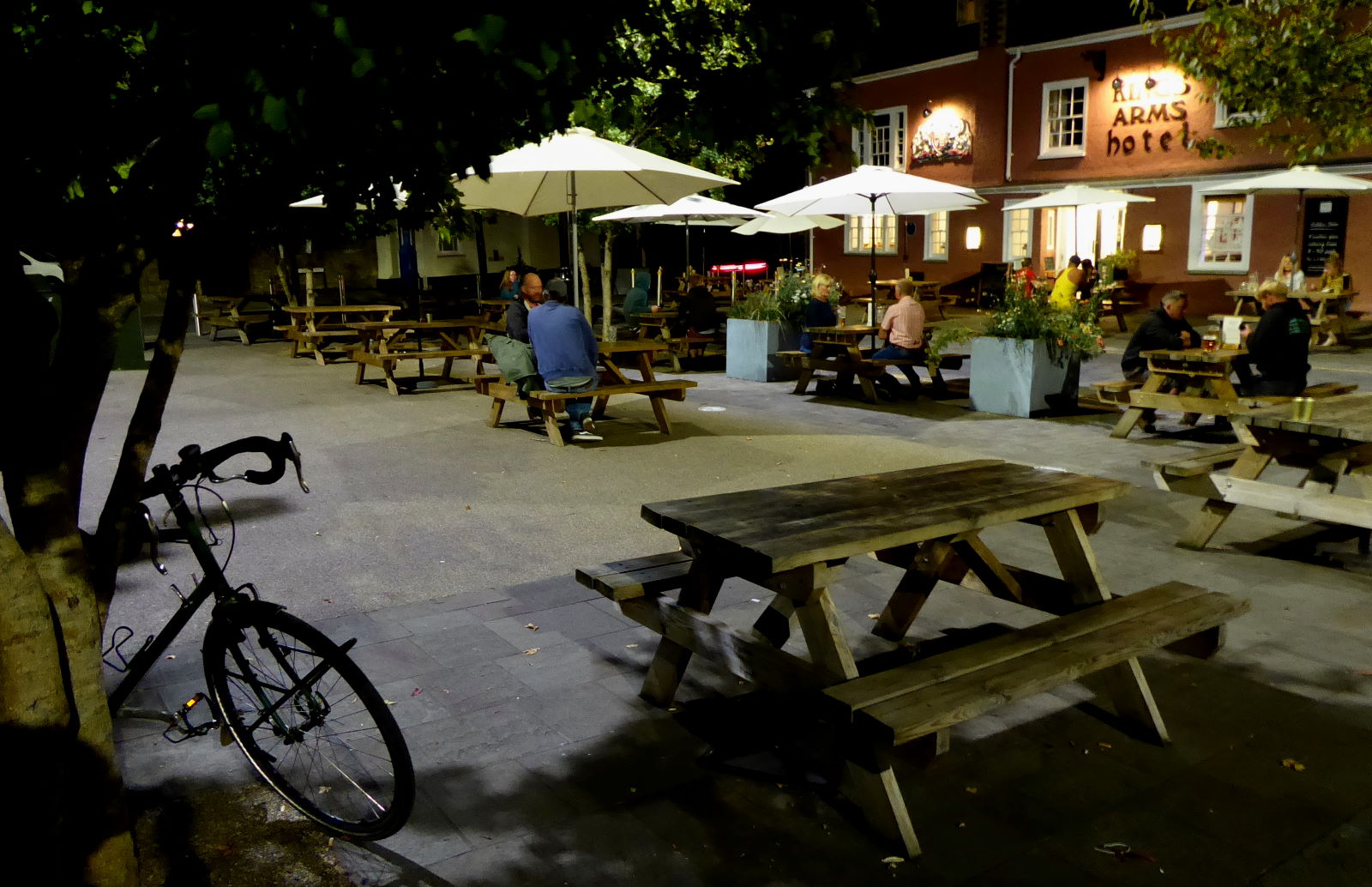 Satisfactorily fumigated, I trundled into the centre of town to look around its market streets and independent shops – OK, and its Wetherspoon – and met up with fellow cycle journo Jack Thurston, author of the excellent Lost Lanes books, who now lives here.

We had a pleasant couple of local ales in the Kings Arms in the warm, soft market square (pic). Jack had just come from his Welsh language class, and was mildly impressed by my knowledge of certain phrases and vocabulary in the ancient and poetic language, particularly those involving beer and lavatories.