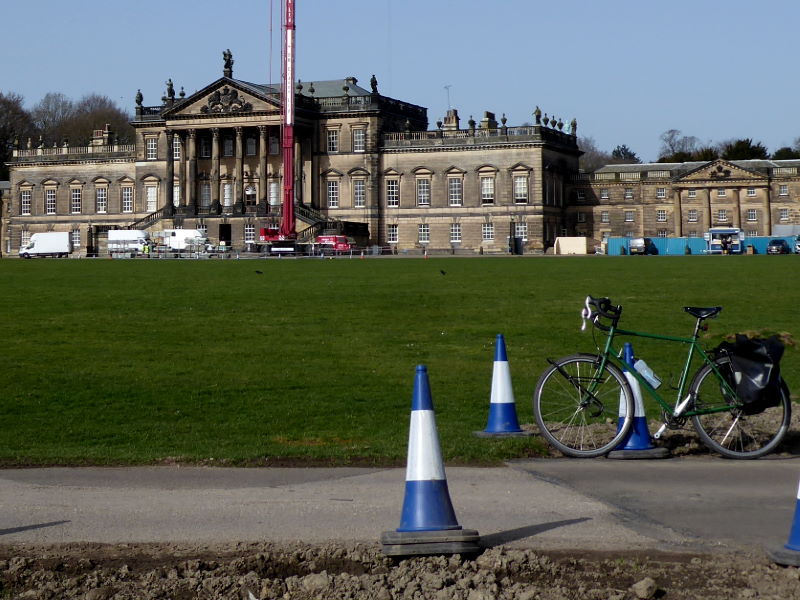 From Britain’s biggest house to its smallest today: Wentworth Woodhouse, outside Rotherham (23,000m2) to the hermit’s cell, York (7m2). This gloriously sunny ride also featured a place called Jump, a road called No, red and yellow bikes and blue cones, and a southern French village adrift in South Yorkshire.

With a windless, cloudless sunny day forecast – one which turned out to be the warmest March day in living memory – I did 60-mile trip through South Yorkshire, from Britain’s largest house (Wentworth Woodhouse, a former stately home outside Rotherham) to the hermit’s house bolted on to All Saints Church in York.

Conveniently, this latter is only a mile from my own house, which is about as ordinary as you can get: an inter-war council semi.

En route to the mighty manor house from Elsecar’s train station, I couldn’t resist cycling through the village of Jump, one of Yorkshire’s many Places With Silly Names:

Wentworth Woodhouse is big. The biggest house in Britain. Bigger than Blenheim, bigger than Versailles.

It was built by the Watsons (later Fitzwilliams) from the 1700s. They wanted to outdo every other stately home, and they outdid. Three hundred rooms, 8km of corridors, huge grounds with lakes and follies. Guests were given confetti to lay trails from their rooms so they could find them again. There was one room just for candles and another just for having your hair cut.

The discovery of coal in the grounds and the class war of Britain’s post-1945 reboot saw it requisitioned as an open-cast mine and the toffs booted out; after serving as ramshackle accommodation for Sheffield Poly it went into private hands. It’s a now a visitor attraction, but the crumbling old pile needs unimaginable millions spent on it to make it liveable again. For some reason I was put in mind of my annexe.

Indeed, the cranes and building crews were out in force across the vast East Front today, as well as countless day-trippers, though I was the only one on a bike. There was also a nice line in natty blue traffic cones: I hadn’t realised that cones are colour-coded for purpose. That said, I couldn’t see any overhead power lines here, the notional context for such a shade.

It was too early for a picnic, sadly. In any case, I had 60 miles to cover, so I set off northwards into the gorgeous morning. The sky was as blue as a traffic cone, and devoid of clouds, but not entirely devoid of overhead power lines.

I picked up the Trans Pennine Trail alongside the River Dearne for a few miles, through country parks that used to be lifeless mining spoil heaps. I cycled here in 2011 while doing the whole TPT.

The demise of the coal industry in the 1980s revitalised nature here, turning it into birdy wetlands, but destroyed the heart of many communities.

There’s little left of colliery culture now except a few sombre memorials, and bitter, boring old socialists banging on about how we’ve never recovered from the damage of the Thatcher era, such as me.

I had lunch at a memorial of a different kind: Barnburgh’s old pinfold, or sheep pen. I enjoyed a surprisingly sweeping view of the once-coaly valley below with my sarnie packup. It was warm, peaceful, and I was relaxed and happy.

Then I looked at my watch and realised it had taken me three hours to do 15 miles, and I had 45 to go.

From here it was a mix of plain, aimless B roads across progressively flatter landscapes, and charming, untrafficked back lanes winding between them. I was delighted by Hooton Pagnell, a surprisingly un-South-Yorkshire-like village that sounded like it should be in Northamptonshire and looked like it had been airlifted from rural France.

There were millions of fellow cyclists out today. I was the only one in M&S shorts and sunhat – most were in full road-bike kit. I crossed the A1 north of Adwick in the company of a dozen of them, one of whom admired my bike with admiration. I know that frame, he said admiringly. It’s a Thorn! Recognise it anywhere.

I didn’t tell him it’s from Spa Cycles of Harrogate. I preferred to let him believe I could actually afford a Thorn.

In Campsall I was intrigued to see a road called No Road. That’s the name of the road, locals confirmed. This is a sign for a road called No, not a sign saying ‘this is not a road’. Must cause all sorts of confusion when giving directions to delivery drivers.

Just up the road, in Norton, was the first of two vividly coloured bikes: one in the exact shade of red I tried to paint a Dinky toy car at my grandparents’ circa 1967, but only succeeded in redecorating the kitchen table; the other, later on in Beal, a canary yellow celebration of when the Tour de France came through Yorkshire in 2014.

I had to take a tedious four-mile detour caused by the closure of the A19 bridge over the Aire (one whose roadworks, unusually, did not admit pedestrians or bikes).

I rolled into Selby via an old main road now by-passed and cul-de-sacked and used for access only, making it effectively car-free.

I celebrated in the best way I know how, by taking a picture and having a drink. Only of water.

And in Selby itself, in front of the grand Abbey, I celebrated getting on to the home straight in the best way I know how, by taking a picture and having a drink. Not of water.

The last leg, along the Selby-York railtrail, took me past the familiar scale of model of the planets that I’ve blogged about before.

The surface is getting rough now with tree roots erupting through the tarmac, though. There are particularly bad stretches between Pluto and Neptune.

And Neptune and Uranus. And Uranus and Saturn, Saturn and Jupiter, and Jupiter and Mars.

Between Mars and the Sun is not bad. However, the astronomically savvy among you will realise that this accounts for under 4% of the distance to Pluto.

And finally, my home town. And the smallest house. No, not my annexe. Smaller than that, smaller than even a Japanese office worker’s flat, smaller even than London cubbyholes that become worth quarter of a million quid by translating the term ‘converted broom cupboard’ as pied-à-terre.

Until I can get inside both with a tape measure, I’m going to say this is smaller than the supposed ‘smallest house in Britain’, the deceptively spacious half-up, half-down cottage in Conwy, North Wales. (Which is evidently 9ft x 6ft: a smaller footprint, but with stairs to the mezzanine, so it’s not clear which is larger in a volume sense. York’s is certainly the smallest in England, anyway.)

York’s claimant is the hermit’s cell bolted on the back of All Saints Church, North Street, in the centre of York, within flooding distance of the Ouse.

Whether it counts as a house is, of course, open to debate. And dubious. It’s not on Rightmove, for instance, and you could point to any number of old hermit and anchorite cells round the country.

But this has a claim to have been a permanent dwelling. For decades it was the home of Brother Walter Wilman, the church sacristan; the BBC made a short film about him and his miniature residence in 1961, presented by a smooth, rather repetitive, Alan Whicker, who was smooth, but rather repetitive.

There’s an extra porch bit these days, clear from the newer brick, and it’s a store room rather than someone’s abode. But when Walter lived there, it was a house and home, ten feet by eight (3m x 2.5m). Snooker tables are bigger. Wentworth Woodhouse is 3,300 times bigger.

And anyway, it made for a good excuse for a ride. One which finished at my own home. Not big, not small. But big enough for me and those that I love.

I’m including bikes with people here.