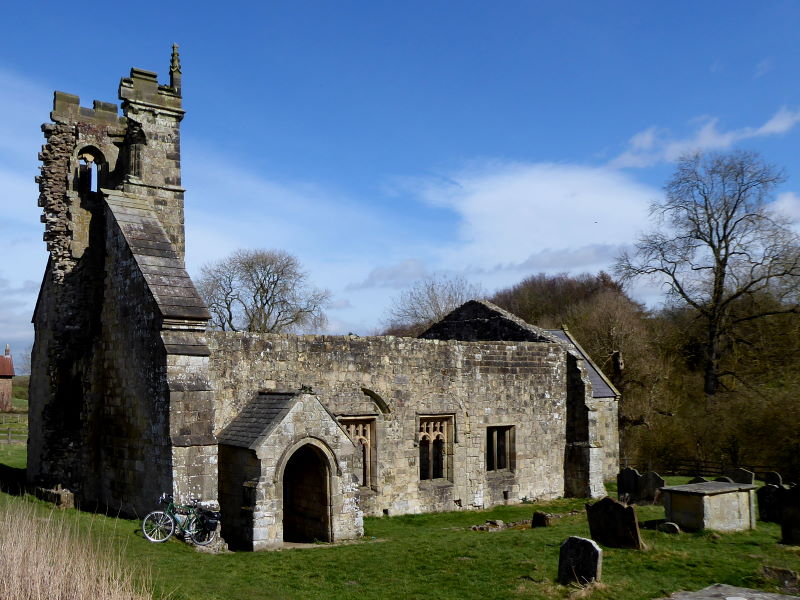 Nobody has. Because it’s not there any more. It’s Britain’s most famous DMV: deserted medieval village. A thriving little settlement in the 1300s, it was abandoned in the early 1500s when it became more profitable for the owners for sheep to live there than people. So I cycled there today, and enjoyed a fabulous day in the Wolds’ sinuous dry chalk valleys.

Past Acklam, the woldtop views of the flatlands north of York are superb – and unexpected. It doesn’t feel like such modest climbs deserve such sweeping vistas. Is this cycling’s version of Imposter Syndrome?

More superb scenery came soon after, on one of my favourite rides in Britain – the freewheel from that panoramic top down Water Dale to the village of Thixendale. I stopped for a break and had two Aldi Chocolate Hobnob knockoffs there, which reminds me, the budget supermarkets start their bargain bike stuff sale today…

The lanes from Thixendale to Wharram Percy are delightful too, with an unexpected lake – normally water just disappears without trace into the porous chalk, like Prime Ministers avoiding scrutiny on political interview programmes.

A climb to the ridgetop provided a fine view over another of those dry valleys that look for all the world like a ferociously cuttinged old railway line, as if companies at the 1840s height of railway mania had madly tried to outdo each other in threading rival Malton-Beverley lines through the hills.

And, as the sun appeared, so did Wharram Percy, accessed by a half-mile path from the car park. Britain has 3,000 DMVs, and WP is the most famous of the lot, thanks to being thoroughly researched in the second half of the 20th century.

Celebrated it may be, but there’s not much to see. Nothing remains of the houses except for some stony mounds up on the ridge. There’s a pond and ruined church and, er, that’s it.

Nevertheless, on a lovely day like today, in the tranquil car-free valley, the pondside was the perfect place for a picnic lunch of gazpacho, bacon and brie sandwiches on sourdough bread, fresh strawberries and cream, and a bottle of IPA. Unfortunately I didn’t have any of those, so had to make do with my two remaining Aldi Chocolate Hobnob knockoffs and contents of my water bottle.

But as a reason to ride on the first weekday after the clocks went forward, Wharram Percy provided a fine excuse, and getting there and beyond took me through parts of the Wolds I’d not explored before.

I headed along more lanes of austere, breezy beauty to Settrington, where the Wolds Cycle Route directs cyclists across a ford. I didn’t fancy sloshing my drivetrain through mucky water and used the footbridge alternative.

At Malton I refreshed myself at Asda, where the cycle parking was appropriate for my day based round Wharram Percy – there was nothing to be seen, in other words.

On arrival at the train station next door, about to head homeward on the next service, I was impressed by how early I arrived there, given my full day: take that, Imposter Syndrome, maybe I cycle pretty fast after all!

Then I realised I hadn’t put my watch forward on Saturday night, and it was an hour later than I thought.