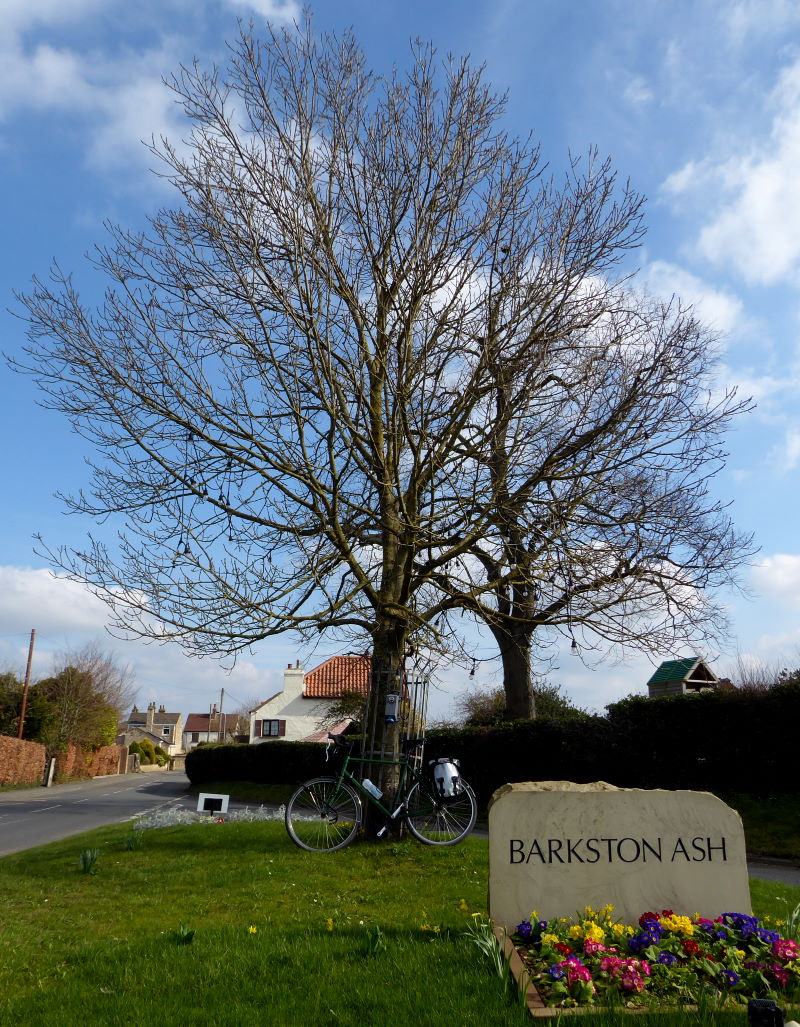 Barkston Ash’s ash tree is the centre of Yorkshire. Sort of.

The true geographical centre of Yorkshire – in other words, the place you could balance a Yorkshire-shaped jigsaw piece on top of say a cricket ball, though I’m not suggesting anyone try this – is in a field full of cows in the village of Hessay, according to the Ordnance Survey. I cycled there in 2017.

But there are other candidates. One is the Victoria pub at Cattal, not far away from Hessay. I had a pint there once. Appropriately, it was middling.

And then there’s Barkston Ash. The eponymous tree in the pleasant village, a few miles south of Tadcaster, is often cited as a ceremonial centre of the county. Today was sunny, the most cyclable day of the year so far, and I couldn’t resist biking there to see it, a round trip of 30 miles or so.

I took the bike path alongside the A64 from York to Tadcaster; noisy and humdrum, but a decent surface. Taddy was at its sunny best: lots of cyclists passing through, lots of people picnicking or just hanging out on the banks of the Wharfe, lots of people queueing outside the bakeries.

Tadcaster is of course famous for breweries. There’s Sam Smith’s, John Smith’s, and Coors: so, make that one brewery, one factory and a chemical works.

Sam’s is said to be Britain’s oldest brewery, founded in 1758, but of course its management style has moved on since then. Backwards, unfortunately. I often joke about Sam Smith’s (which is renowned for its affordability) but to be honest I am rather partial to a pint – close your eyes and you really could believe it was beer.

John Smith’s is a different kettle of fish, which gives you an idea what I think of its taste. The factory there bears the legend JOHN SMITH’S BREWED HERE. Perhaps they didn’t have space to put SYNTHESISED.

Finally, a word about Coors. Unfortunately I can’t say what the word is, because profanity filters might block this blog post. The beverage not only lacks apostrophes, but also anything resembling a taste.

But no beer for me today, what with pubs still being closed. I was keen to get to Barkston Ash, and the centre of God’s Own Country, so I headed south past Towton, site of England’s bloodiest battle, along the busy and unpleasant A162.

Barkston Ash is big enough to have a manor house: Barkston Towers, which sounds like a mid-20th-century fictional boys’ school.

There are no easy views of it though; the towers are best glimpsed from a bridleway, the house itself from the road to the fish ponds.

The village of just under 400 souls also has a primary school, a biannual scarecrow festival, a village hall and, hearteningly, two pubs: the Boot & Shoe, and the Ash Tree.

And, of course, that tree, Yorkshire’s centroid. It stands at the top of Main Street – a replacement for the original, which died in the 1980s. The current tree is monitored for signs of ash dieback disease and, more positively, is decorated with lights which must make it look nice at Christmas.

Local legend, the Barkston Ash website informs us, says that anyone who spits at the tree will be struck by lightning a year and a day later. Which must be true, because it actually happened to one Jack Foll, an apocryphal figure.

The real Jack Foll was commemorated in a medieval game of football/ fighting which took place annually in the village until 1753, but he didn’t exist either.

Talking of mud-spattered contests decided by first-past-the-post brute force rather than proportionally-represented collaboration, Barkston Ash gave its name to a whole political constituency until 1983, thanks to policy meetings for the historic administrative area around it having been held at the ash tree. It was, unsurprisingly, safe Tory.

I dawdled back through the pleasant back lanes of Scarthingwell Fish Ponds, and retraced my steps through Tadcaster and along the A64 back home.

Obviously I didn’t spit at the tree. I respect the ceremonial heart of Yorkshire. I doffed my protective cycling headgear to it: my M&S sunhat. It really was good to enjoy the first sunshine ride of the year, and to haul my sunhat out of the Bike Stuff Cupboard at last.

So yes, Barkston Ash may not quite have Hessay’s geographical truth about its claim to the centre. But given the choice between a nice ash tree with fairylights with a pub alongside named after it, and a cowpat, I know which I prefer.