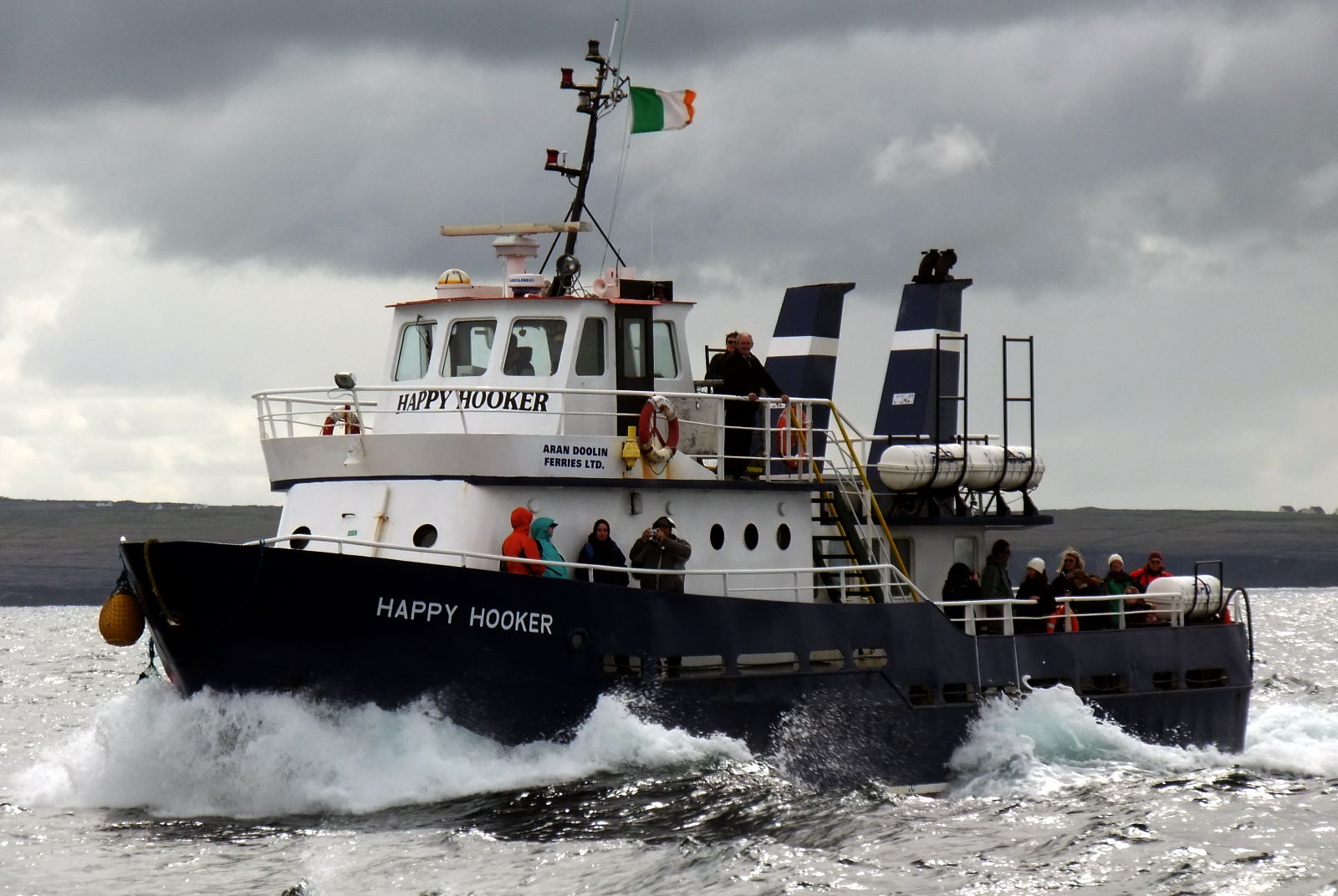 Better weather this morning enabled our ferry to the Aran Islands, from where we’ll hop north into Connemara.

Various companies ran boats across to Inishmore, like this one (pic).
We chose on a carefully-weighted algorithm taking into account factors such as price, bike spaces, and whisky on the breath of the crew. 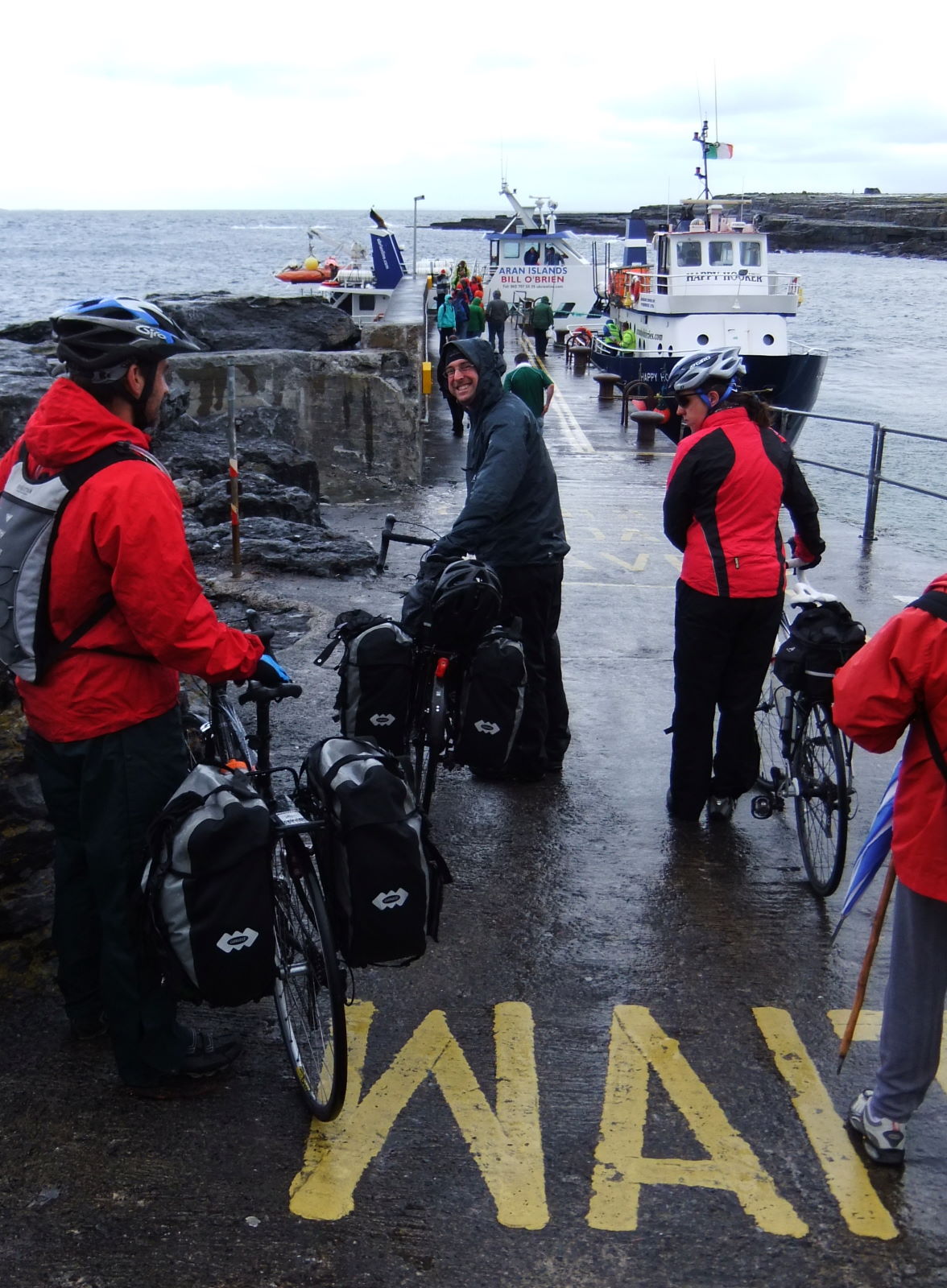 With the last especially in mind we went for the friendly but reassuringly sober Bill O’Brien and his daughter Aine, who provided good banter on our choppy crossing (pic).

We enjoyed views of the Cliffs of Mohair on the way across, as well as a shipwreck, perhaps the victim of an unexpected squall and a skipper who had over-breakfasted on Bushmills.

On Aran we were excited to find a cashpoint and supermarket, and enjoyed a coffee in the cafe next door so that a hypothermic Sue could thaw a little.

More exciting still, we saw a cycle accident. A young American woman hired a bike, but within the first five seconds of setting off – evidently unfamiliar with the concept of brakes, and downward gradients – she careered down a small slope and hit a brick wall at some speed.

A local Irish bloke was desperate to carry her away, but Mark’s cool head prevailed, advising that she not be moved until the now phoned-for doctor arrived. 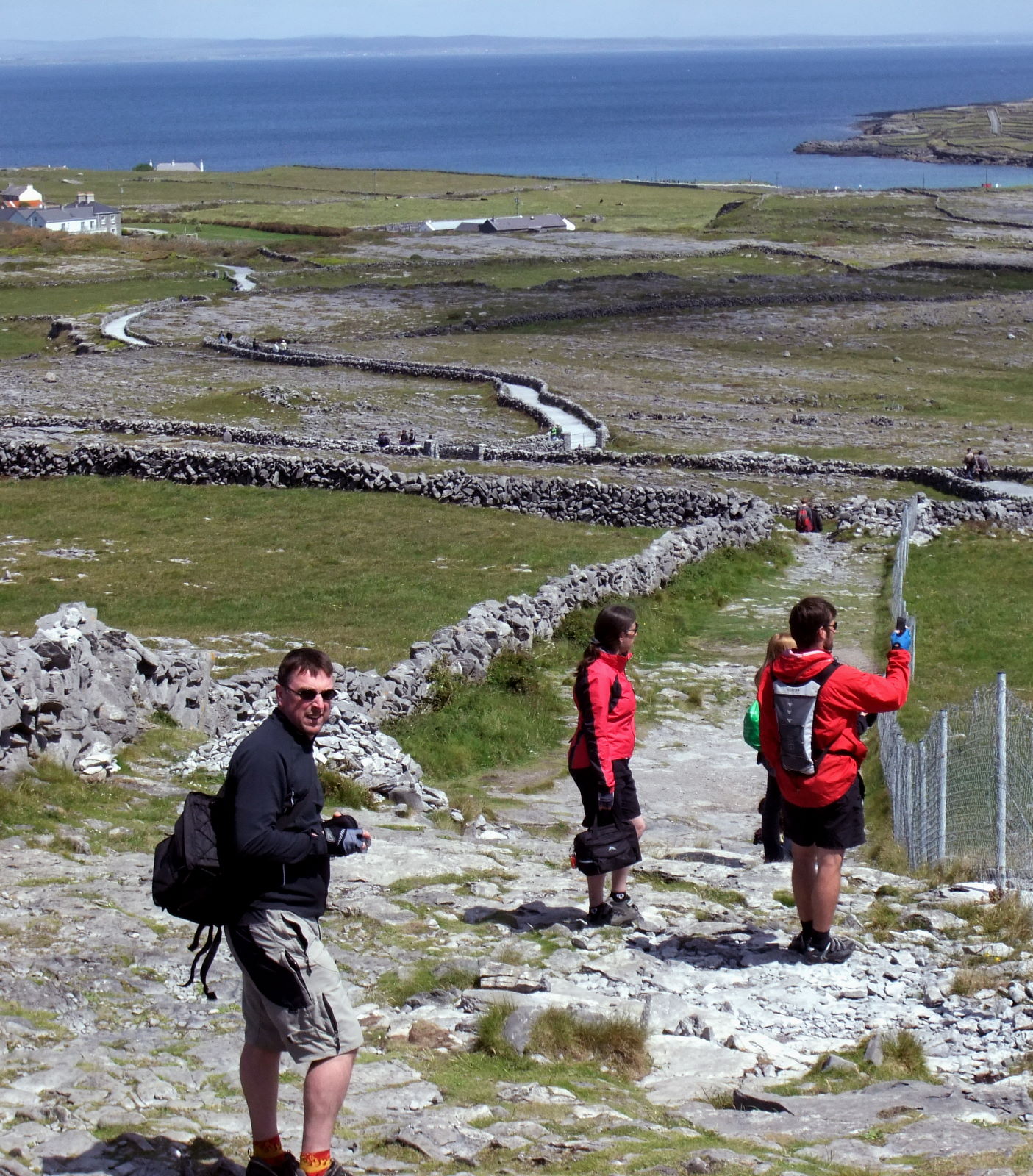 The woman had a companion who sat nonchalantly through all this at a picnic table checking Facebook and texting.

She told us, with a weary smile, that her friend was ‘clumsy’, in a tone that suggested this sort of thing was a tiringly regular occurrence.

Medical attention arrived and our duty of care ceased, so we cycled off to the middle of the island three miles away to explore an iron age fort on foot (pic). 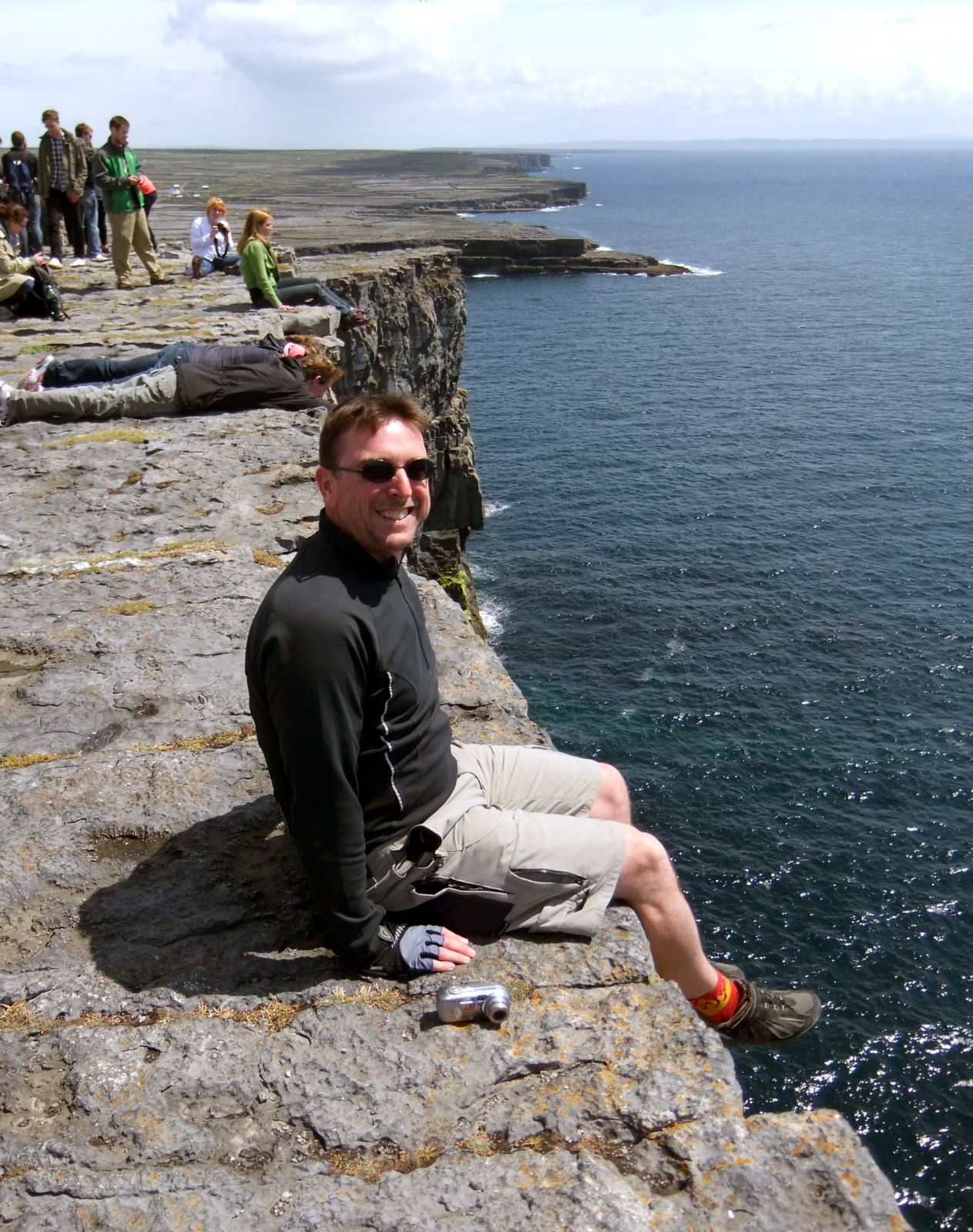 Dun Aonghasa is a fort like none I’d ever seen: it’s on the edge of a sheer 100m cliff, half-ringed by a semicircular defence wall, whose diameter is the precipice itself. No handrail, no safety barrier then or now: just the rocks and crashing waves, a terminal-velocity distance below.

We took suitably dangerous-looking but in fact totally safe photos of us on the edge (pic). And some of Si, too.

We chatted to the affable and informed Ronan the duty guide, who reassured us that people rarely fell off, and when they did, not to worry, we wouldn’t see anything, the waves would quickly wash away the remains. Excellent stuff. 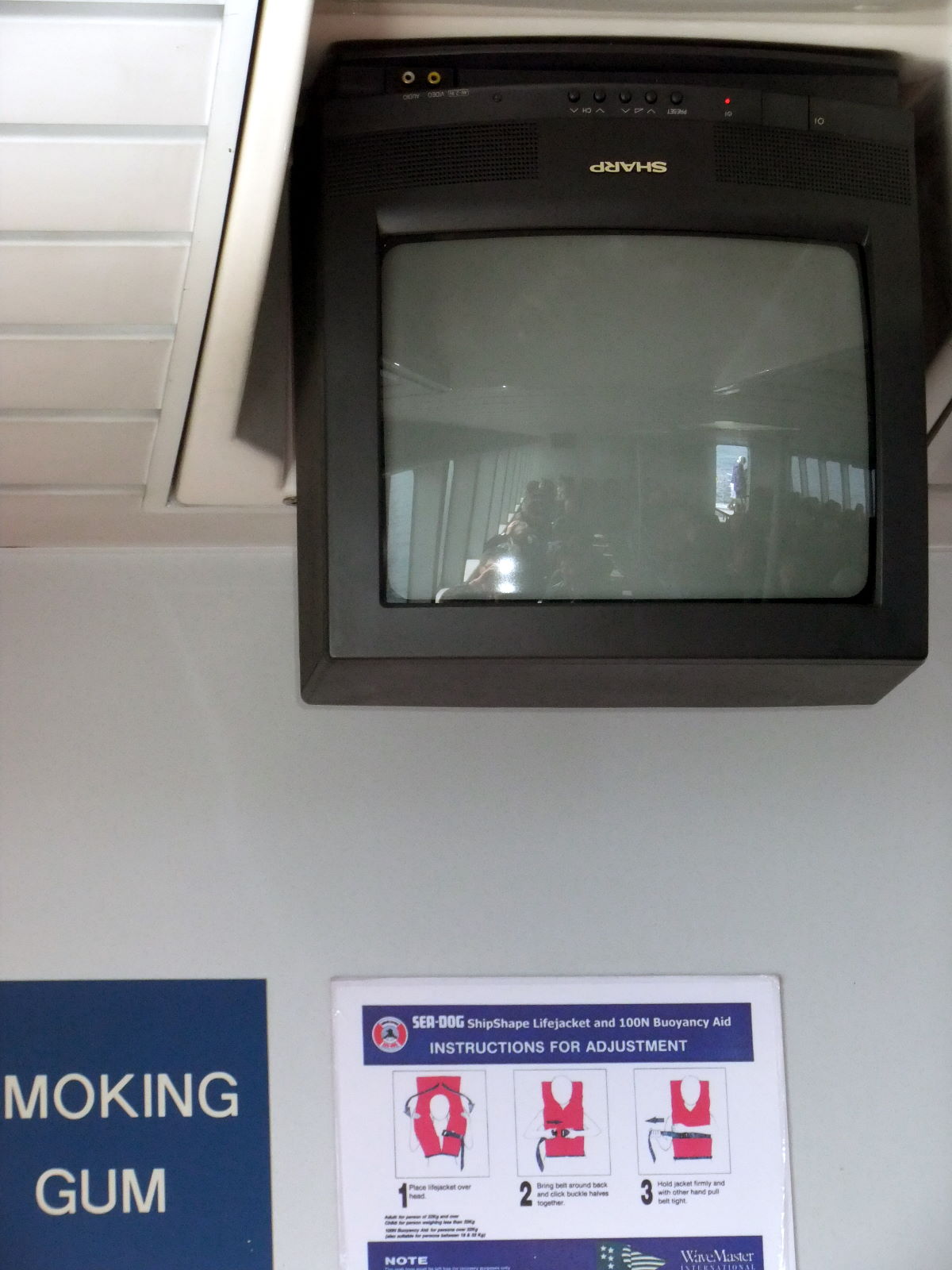 Mark went off to explore the island a bit more, while Si and Sue and I took the beautiful, lightly-trafficked coast lane back. It was now sunny and dry, and all rather fab.

We all took the ferry off the island north into Connemara, rather more swish and upmarket than our little boat out.

This one, indeed, had TV screens for the safety demonstrations, thoughtfully installed upside-down (pic) so they could be conveniently viewed in the event of a capsize. 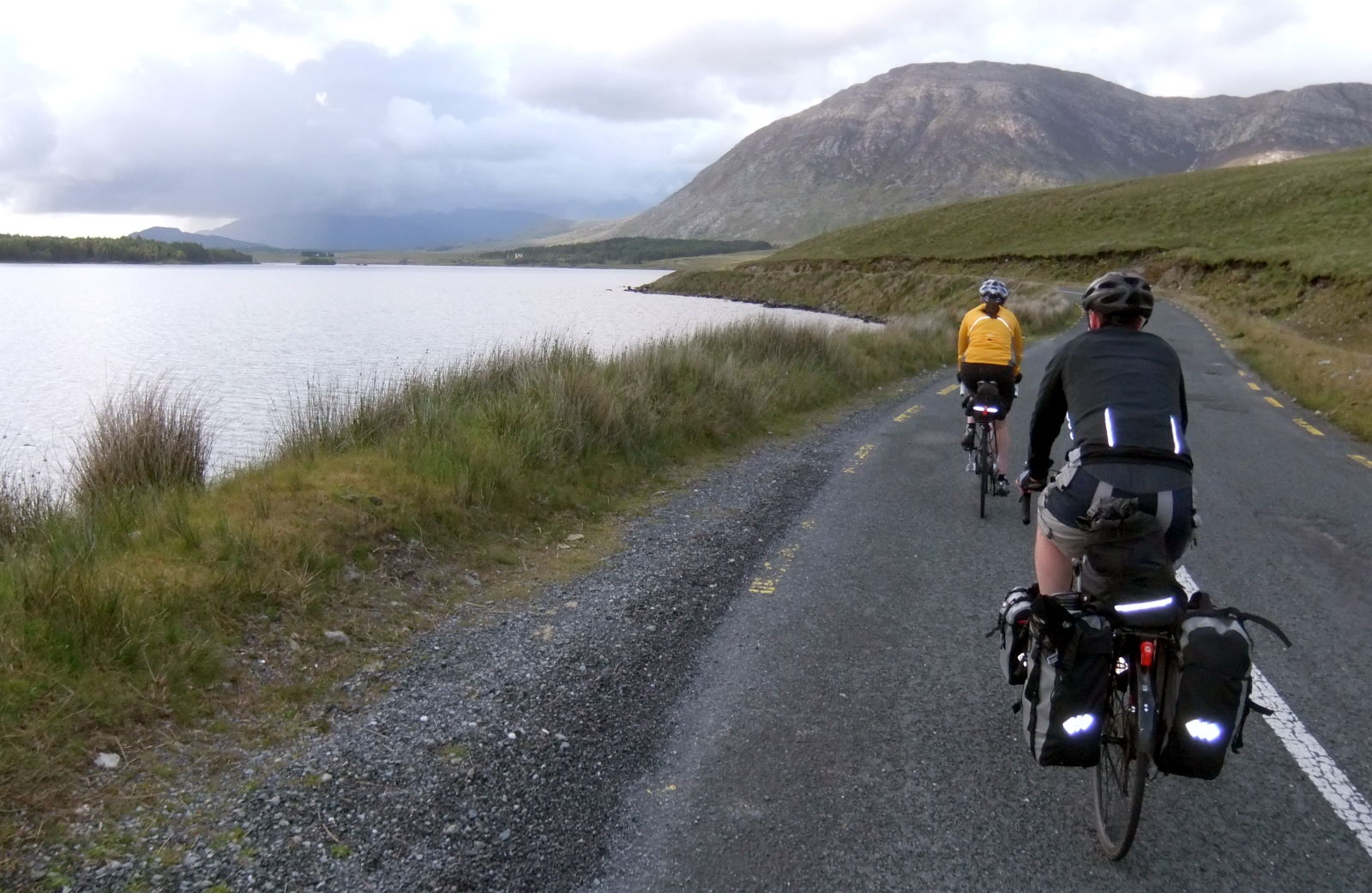 Off we rolled in mainland Connemara, and Mark left us, scooting off towards Galway to resume the job he claims to have. Sue, Si and I were plugging on up to Letter-rack, sorry Letterfrack: a quite superb ride, marvellous scenery all the way (pic), almost flat but always surrounded by hills, the wind often behind us and not too bad even when into us, good surfaces, and hardly any rain. 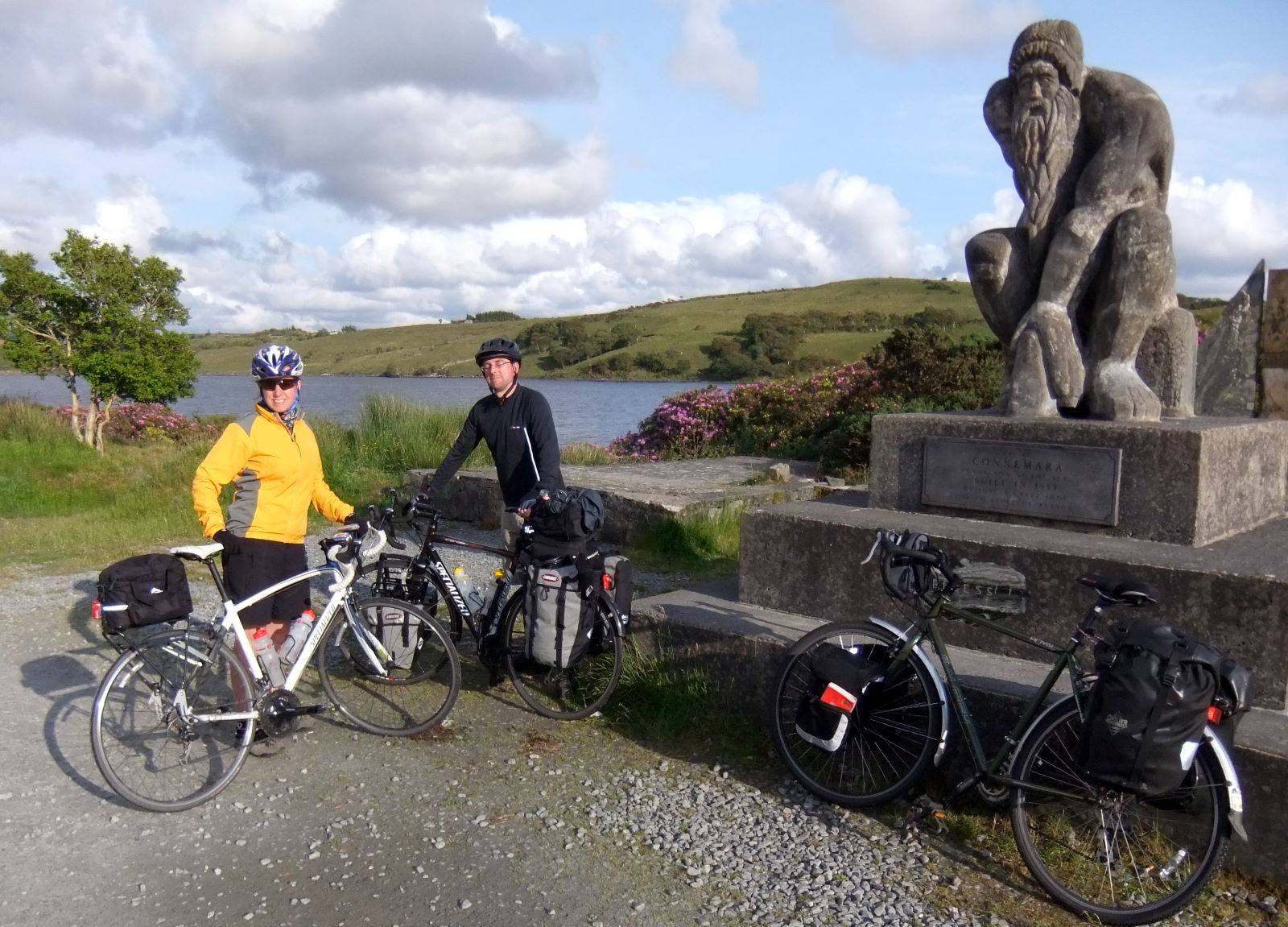 It was a lovely evening, and we stopped to admire the Connemara giant statue (pic). We don’t know who the model was, but we do know it was so cold he refused to take off his woolly hat. 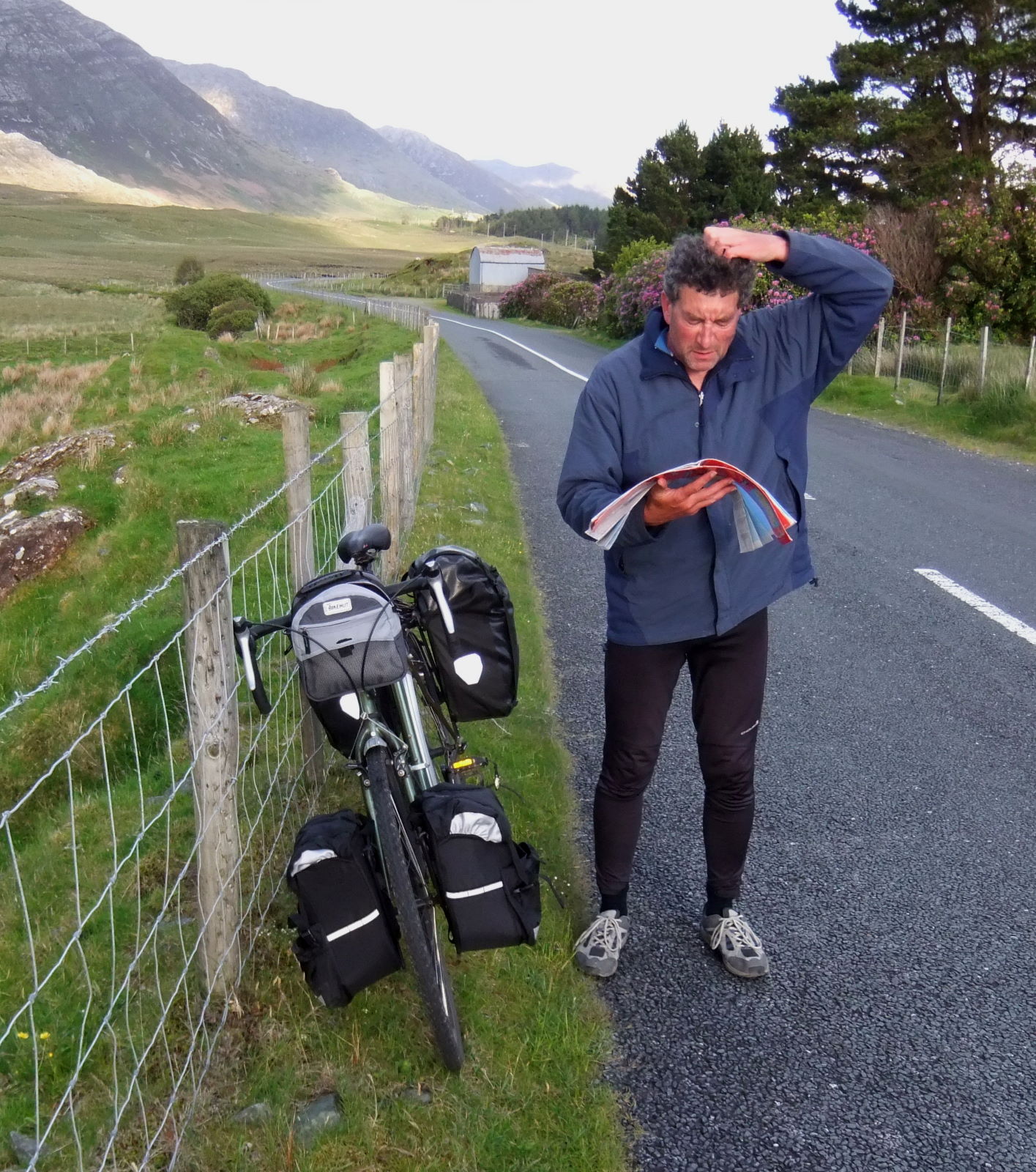 Thanks to my impeccable routefinding (pic), based on Irish satnav – asking people, in other words – we got to Letterfrack well in time for dinner.

Our accomm was a half-junkshop, half-hostel in the grey area between ‘eccentric’ and ‘creepy’.

Reunited with Chris and Paul, who had done a different route today, we enjoyed a splendid and convivial evening of hostel homecook and cheap booze in the grey area between ‘enough’ and ‘too much’.