Today was the day I finished the End to End. 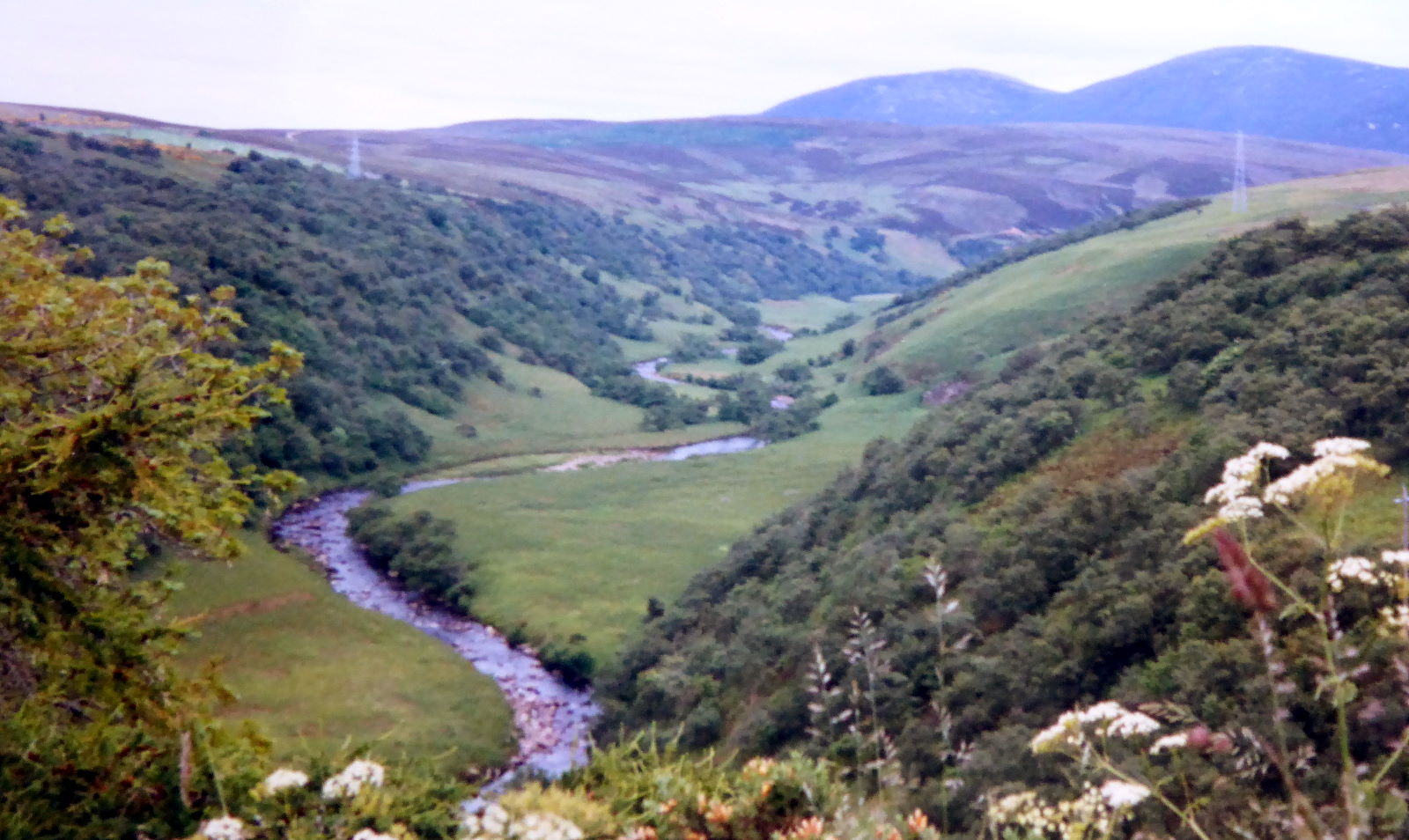 Yesterday’s sunshine was too good to last, and today was another long slog into a chilly headwind with grey, blank, Tupperware skies. Riding up and down the Ord of Caithness (pic) felt like tracing a sine wave. 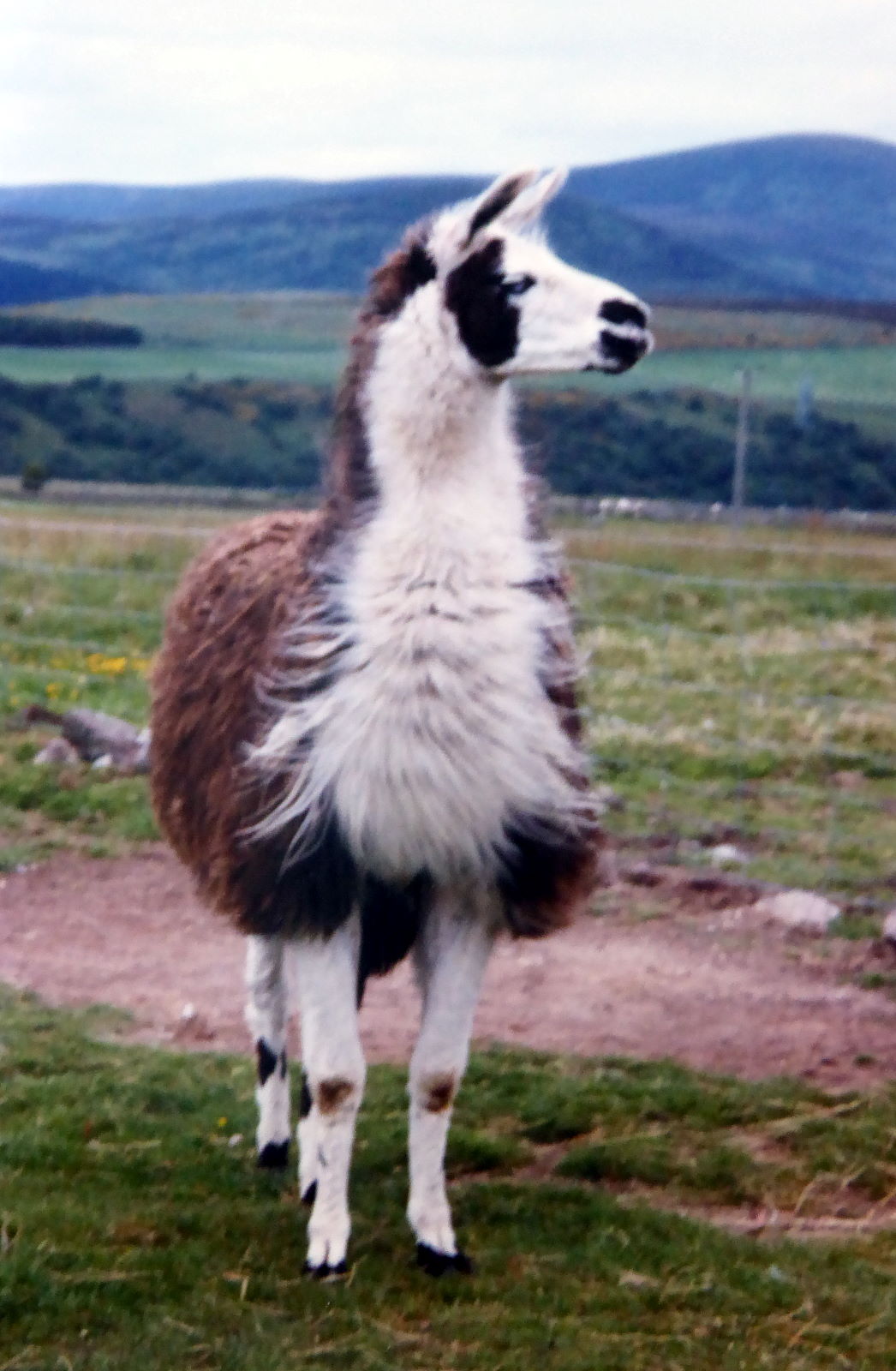 I stopped at a farm, run by a friendly couple from Bristol, to admire the livestock. They were llamas, wondering the same thing I was: what on earth were they doing here (pic).

At Wick I spent a couple of hours, intent on a locally-sourced lunch. In the 1860s this was the greatest herring port in Britain, possibly the world. Today I couldn’t find any local fish anywhere.

I ended up having chicken nuggets and chips, in a shabby cafe full of tarty women with bawling kids.

But I’d also come here for family research. My mum’s lot, fishing folk, came down from here to the then-boom town of Hull in the late 1800s. Perhaps their departure hastened Wick’s decline. 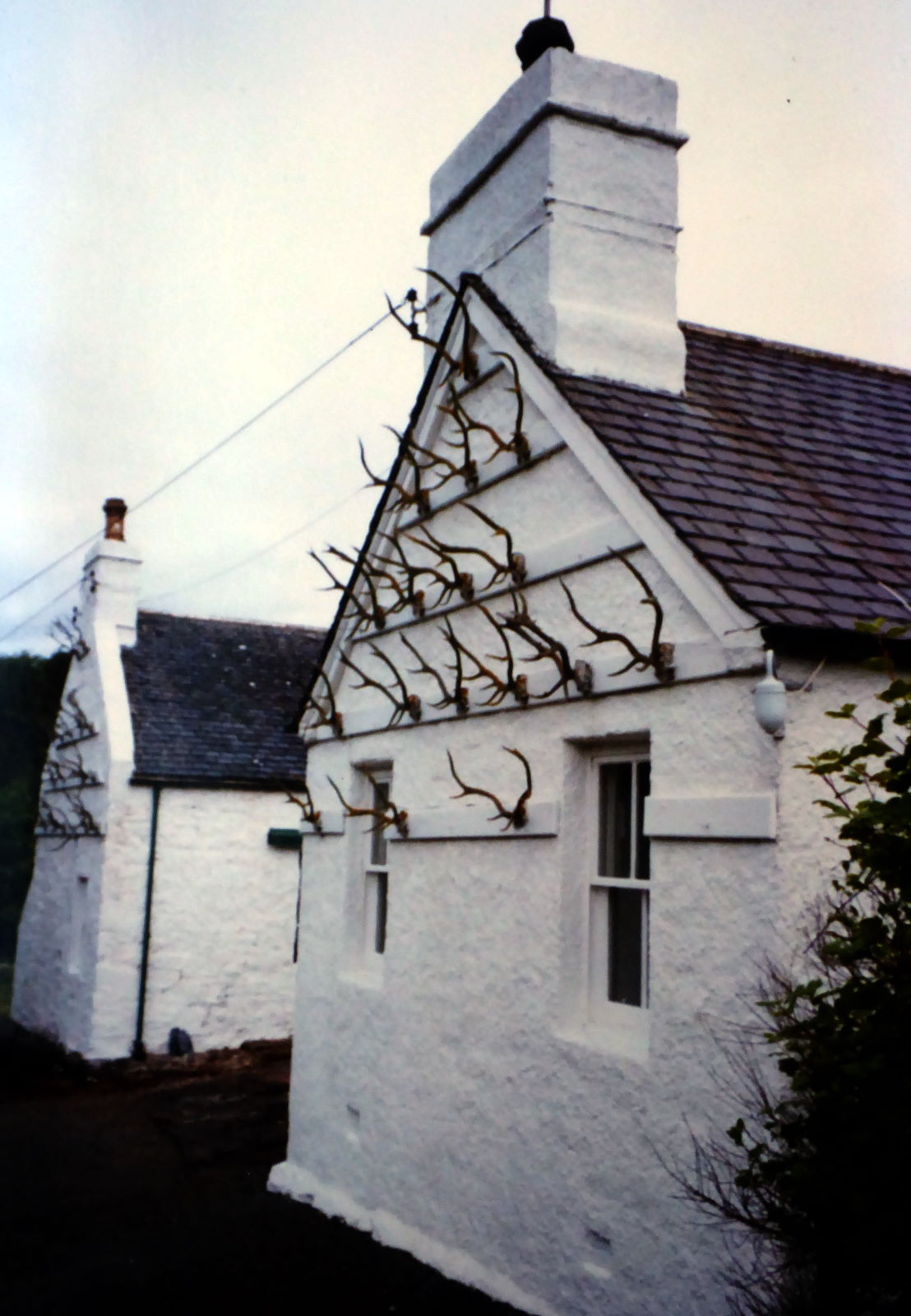 The Heritage Museum had illuminating displays on their way of life, and huge photographs of that era’s street scenes on the walls; I scrutinised them for faces that might resemble my grandad’s.

There were about two hundred candidates.

I plugged on, and paused to admire one farmhouse’s splendid collection of coathooks (pic). 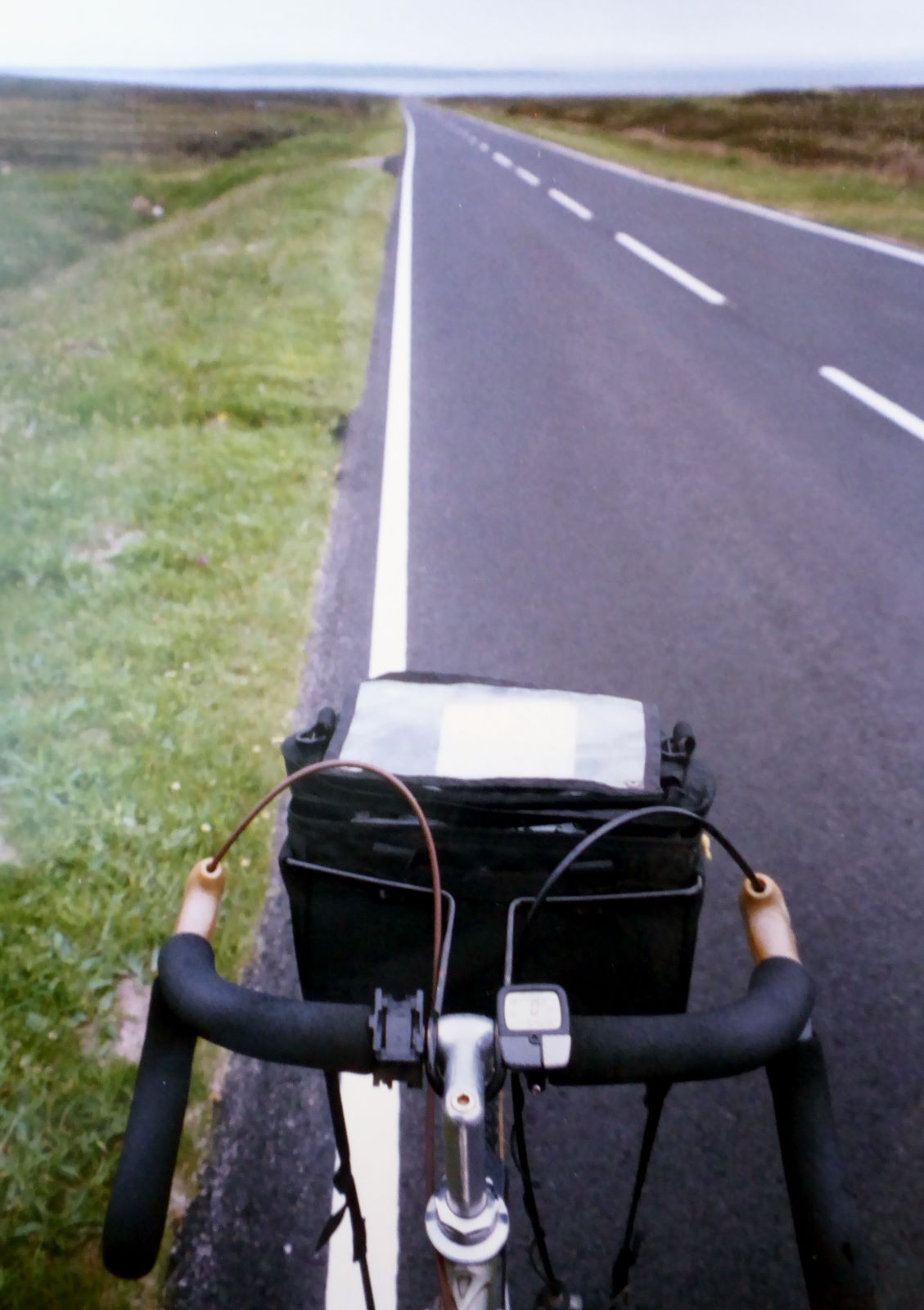 After a stopoff at Caithness Glass – presumably to get out the wind for half an hour, I’m not in the least bit interested in glass – I plodded the final few miles into the brutal northerly.

At around 6.10pm, I made my final descent to John o’Groats itself (pic).

I played Glenn Gould’s Bach 48 on my barbag stereo and saw the Orkneys appear in the distance, sleeping giants in the blue-grey distance.

Three ladies out walking cheered me home and I felt euphoric. So much that I burst into tears. 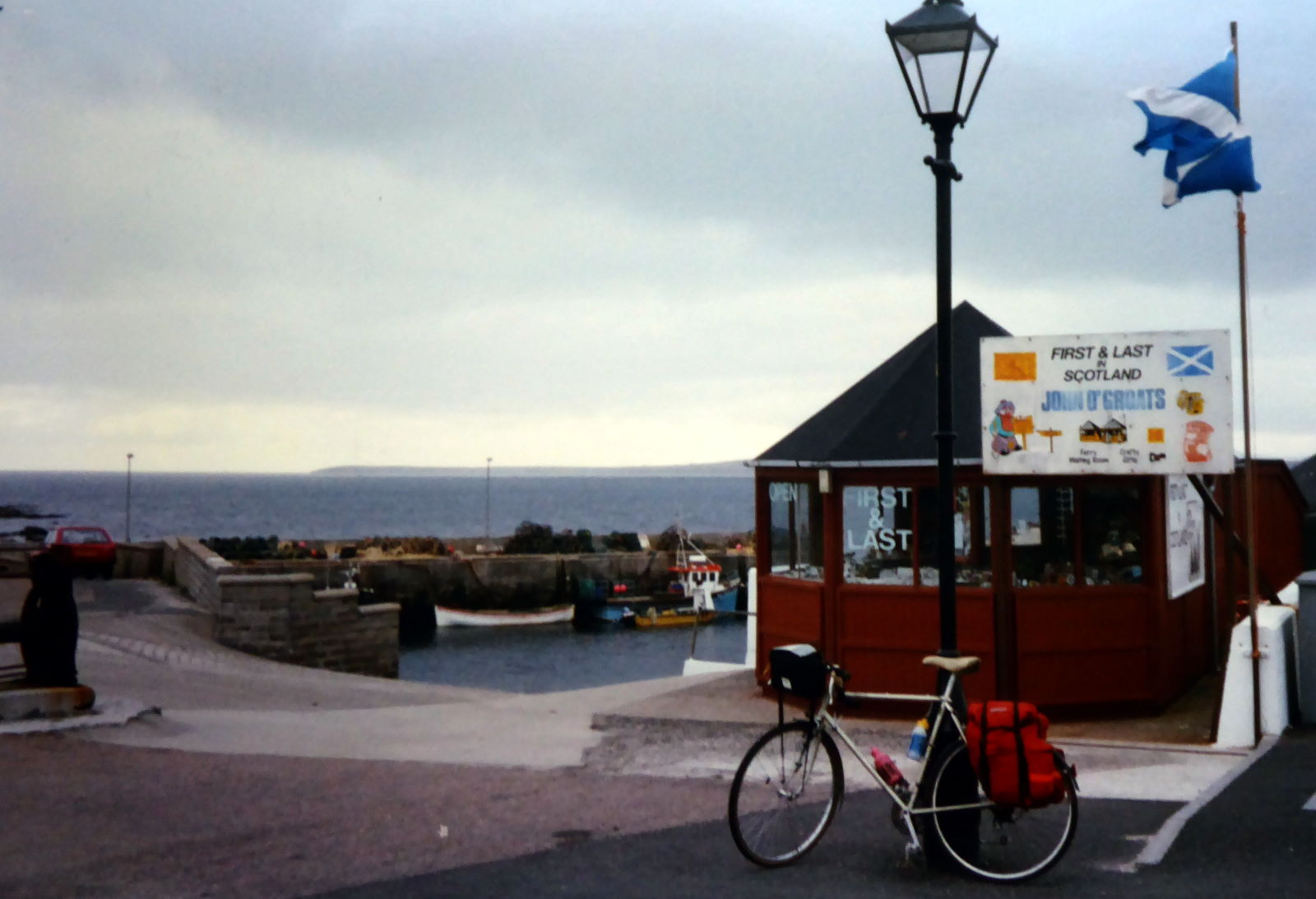 The finish line. As majestic, scenic and thrilling as I’d expected. Not very, in other words (pic). 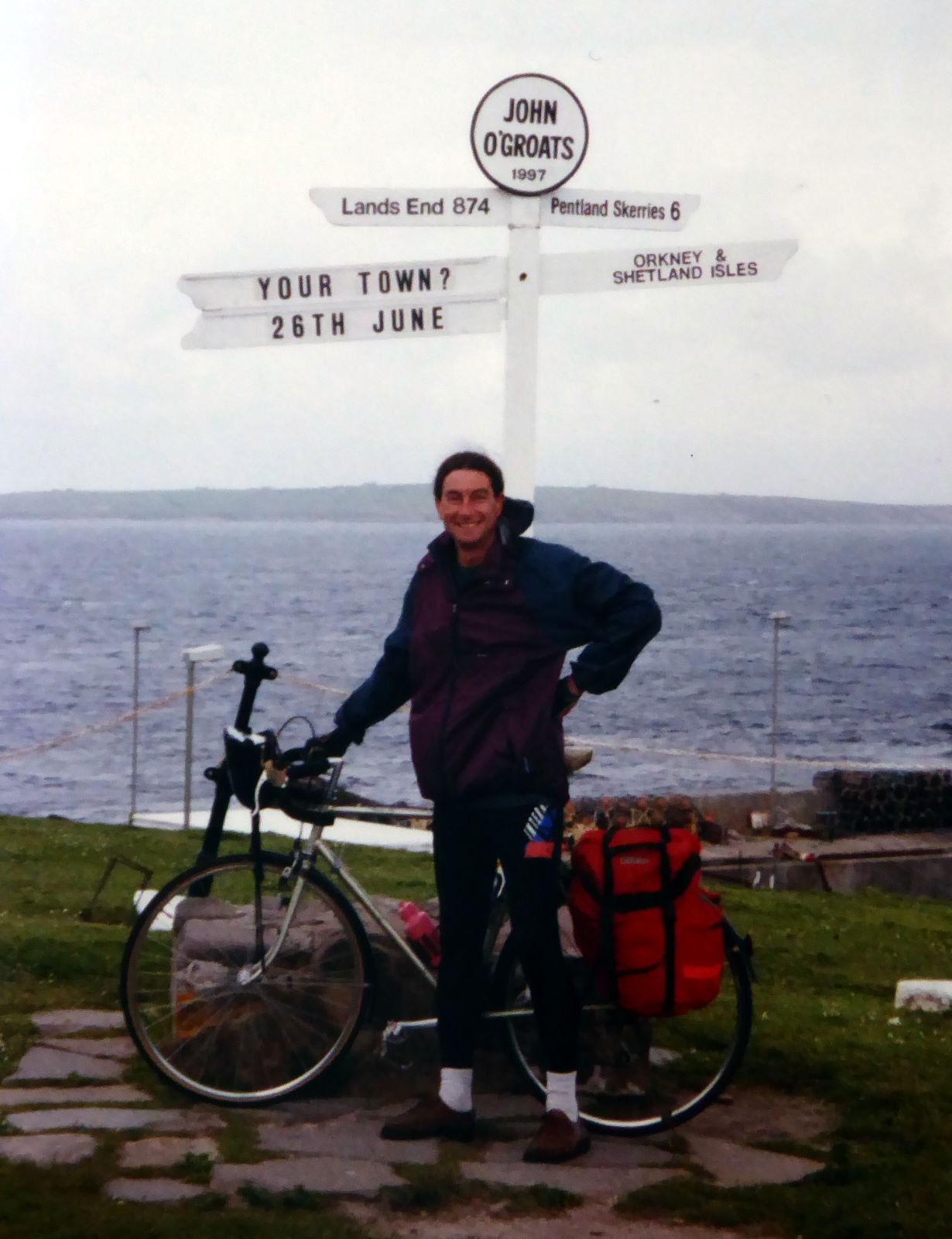 And the signpost. I was actually here. I had made it.

I got out my miniature whisky from Tomatin and toasted myself, feeling as elated as I have ever done (pic – it was taken the morning after, as explained in tomorrow’s post). The sun even came out.

I phoned mums and dads and girlfriends and celebrated with a slap-up, treat, dinner in the John o’Groats House Hotel. With the Wick debacle still on my mind, and my stomach, I went for the Scottish Seafood Platter.

Smoked salmon, smoked mackerel, herring, ‘prawns’ Marie Rose. All ‘local’, but how local was a moot point: the ingredients had all come via Inverness from ‘Scotland’, which was a touch vague. Net rating: Highly strung, several loopholes.

There was no doubt about the provenance of the gateau, anyway. It hailed from Shrewsbury.

There was no draught Scottish beer available in the hotel, so I had a narrow escape. Instead I slurped three pints of passable Theakston’s before bedding down in the adjacent hostel for a beautiful night’s sleep.

Over a thousand miles, three weeks, a lot of local food, two punctures, countless beers, friends and relatives, awesome scenery, and it didn’t rain once. That once was in Helmsdale yesterday. (It proved to have been the wettest June for 136 years.)

Butnoseriously, this is probably the achievement I’m most proud of in my life. So far, of course. And I’ve enjoyed every minute.

Well, except for a few in St Just. And Stow-on-the-Wold. And north of Coldstream. And Perth. And Caithness. And…

Miles today: 57
Miles since Land’s End: 1167
Overall rating: Five-star experience. Not sure out of how many.