Day 3 of the eighth and last of my Yorkshire Compass Rides saw gale force winds, the remote Tees valley – and the culmination of the whole project at High Force, Yorkshire’s version of Niagara Falls. 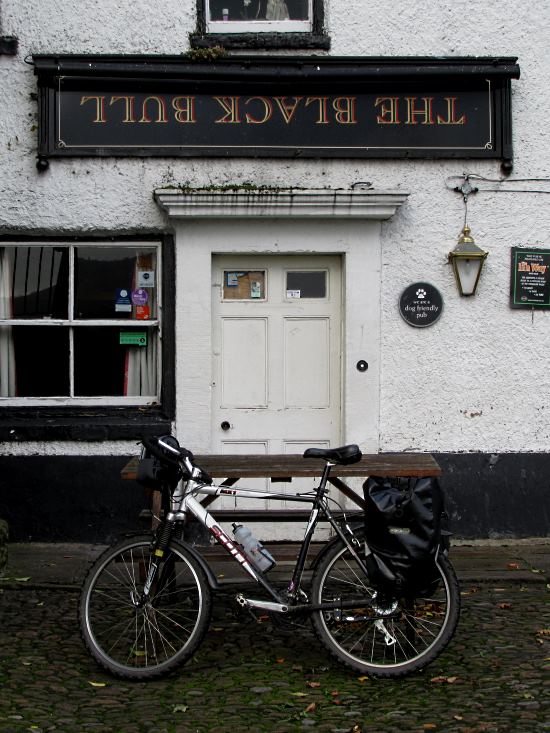 Dales Bike Centre in Reeth fixed my broken spoke in under ten minutes, so I was able to set off earlier than expected into the teeth, claws and talons of ex-Storm Brian. There were 30mph headwinds and 60mph gusts, so as Yorkshire folk round here would say, it was a bit breezy, like. Evidently the gale was so strong it had upended the pub sign for the Black Bull in Reeth’s ruggedly fine village green (pic). 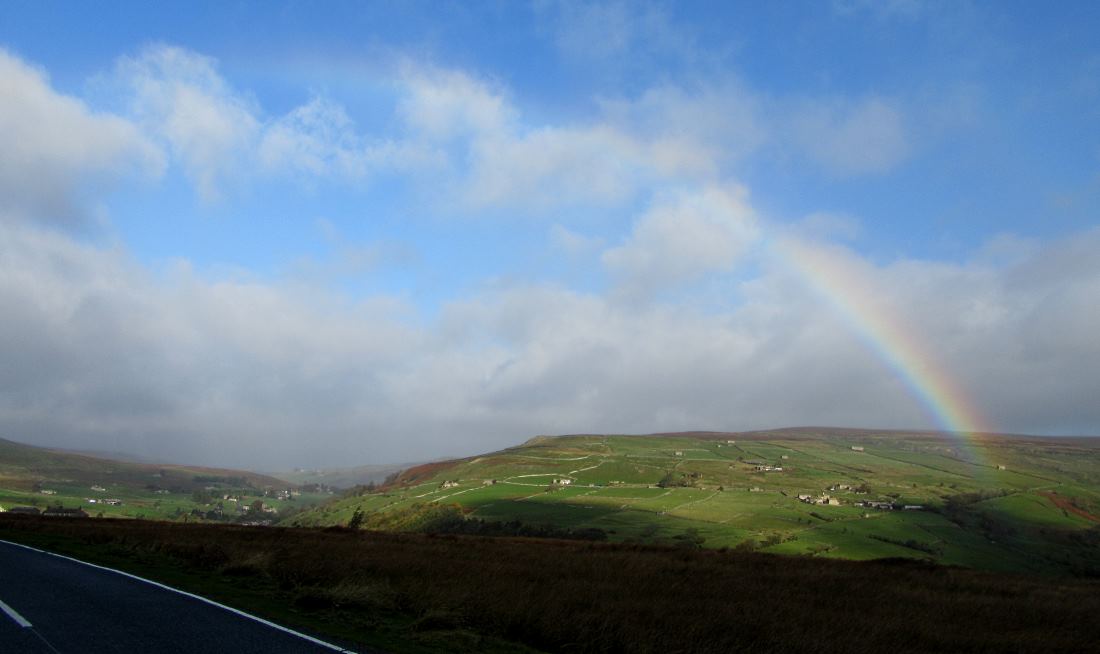 Heading northwest out of Reeth up the Arkengarthdale road, the scenery was blessed with this fine rainbow (pic). Bulgarian legend says that if you walk underneath one, you will change gender. I was reluctant to risk this. I know how expensive it is to get a really good women-specific bike frame. 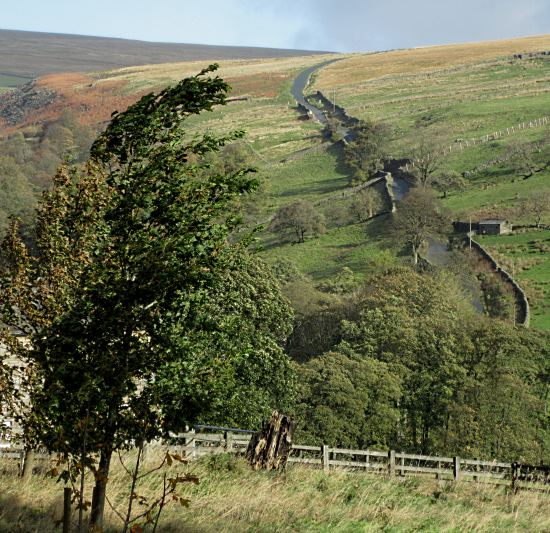 This is the Stang (pic), the road towards Barnard Castle. The bend in the tree gives little idea of the sheer force of the headwind: I had been pushing, even downhill, much of the time since Reeth. But up the Stang it gradually became a mighty tailwind, whisking me uphill without pedalling like I was on an electric bike. 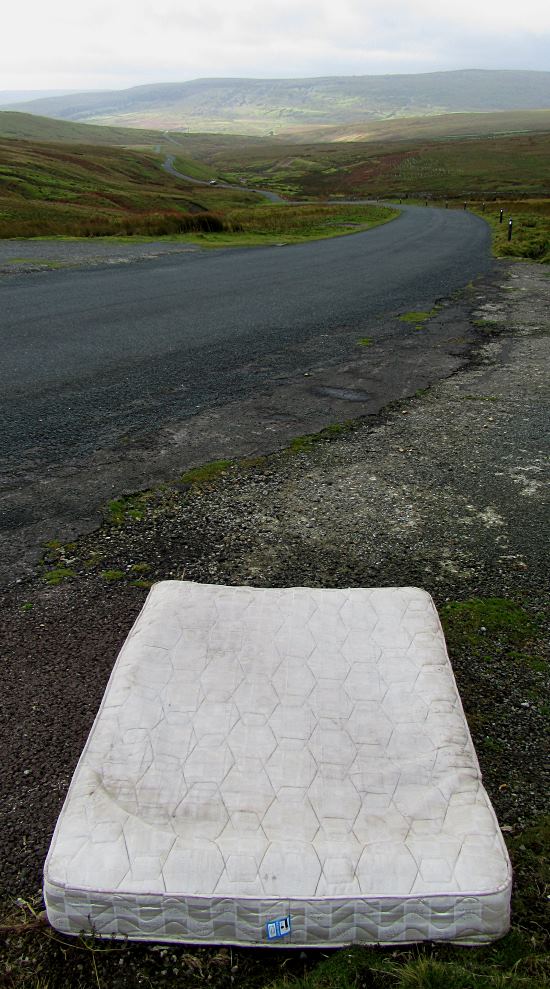 At the top of the Stang, someone had thoughtfully left a mattress for cyclists exhausted by the mile or so of steep climb (pic). This is the modern-day border with County Durham, but of course historic Yorkshire went much further. I hurtled down into the plains towards the Tees.

Barnard Castle didn’t detain me: it would have meant crossing the river from historic Yorkshire into historic County Durham, and I wanted to stay inside the great county until the very northwesternmost point.

So I carried on, alongside the Tees’s southwestern banks, along a narrow straight lane to the cul-de-sac village of Holwick (pic), dramatically situated under cliffs at Yorkshire’s very top left corner. The pub was closed for the day, which was probably just as well. 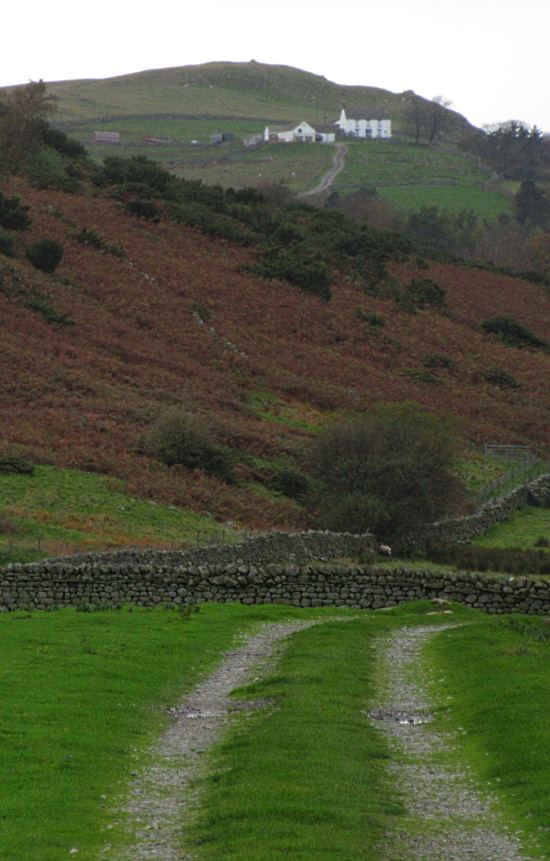 The tarmac road became a farm track (pic), and the Tees valley to my right was now pretty dramatic, like one of the classic Yorkshire Dales. I was heading for that farmhouse, from where a short footpath runs down to the river…

…where a wooden footbridge allows Pennine Way walkers over the water (pic). This was my final goal, my choice as the far northwesternmost point you can cycle to in historic Yorkshire: High Force bridge, just round the corner from the waterfall itself. 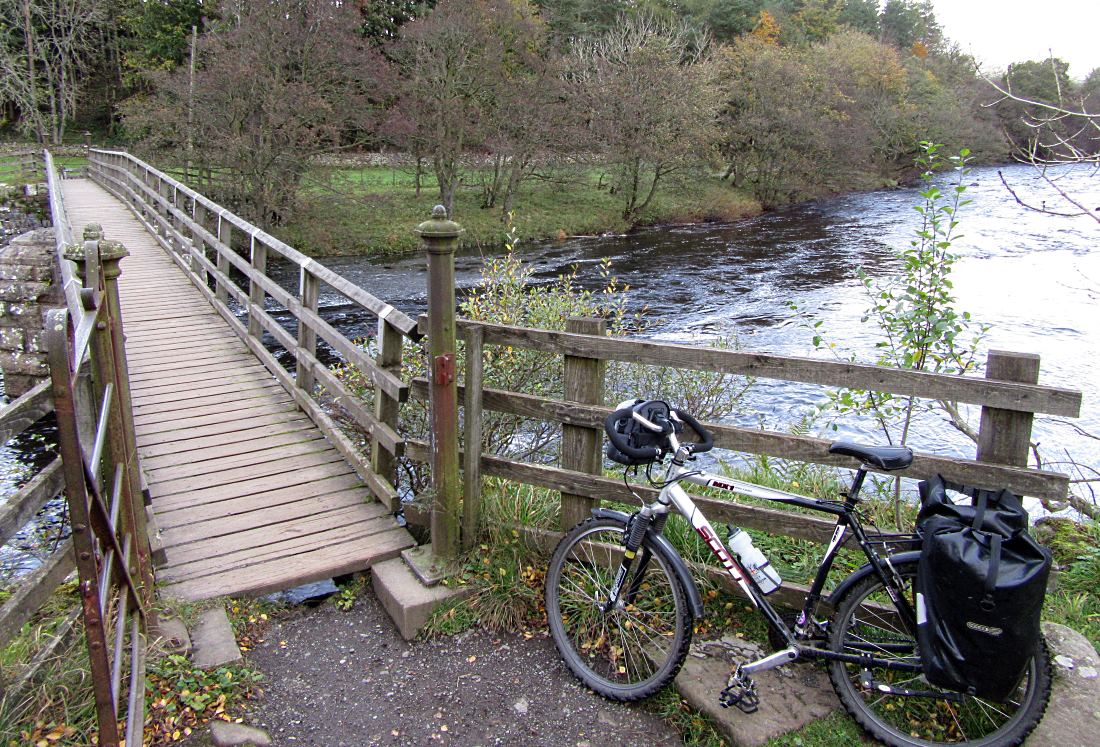 So this was journey’s end, the culmination of a fabulous summer of rides exploring my home county. Walk across here (pic) and you can see the tumbling brown liquid torrents of High Force: I’m referring to the pub of that name, and its decent, reasonably-priced local real ale. After a quick walk down to the waterfall itself, I settled in the pub to sit out the rainstorm before adjourning to my hostel up at Langdon Beck. 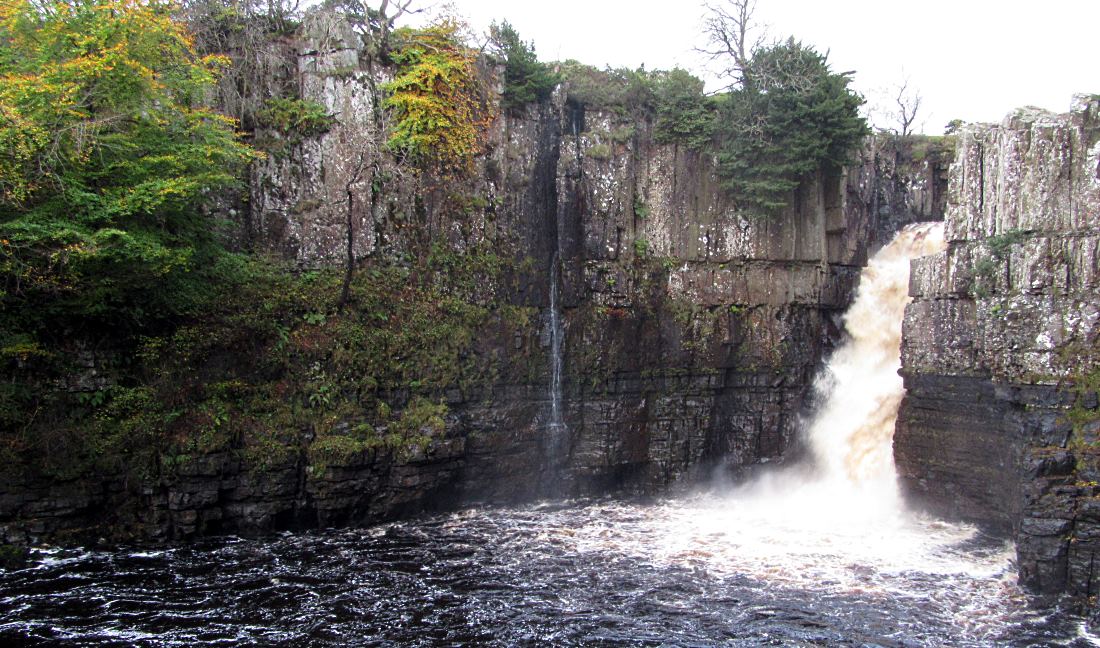 High Force itself was looking impressive (pic), thanks to the recent rains. It’s not nearly the highest waterfall in England, but in terms of flow it’s the biggest, and is possibly the loudest, so it’s an appropriate endpoint for a Yorkshire project. Why bother going to Niagara Falls or Iguazu when we have this?

A couple of miles’ walk along a muddy footpath from High Force, on the south bank of the Tees, is the rocky outcrop of Cronkley Scar (pic): the northernmost point in historic Yorkshire, seen from across the river looking west. Why bother going to Uluru or even Ayers Rock when we have this?

It’s been another superb ride, showing me many different sides of my own county. I’ve thoroughly enjoyed this project and I’m a little sad that these eight rides are all over. Stunning dales and moors, vibrant industrial towns, lively people and great pubs, historical gems and fabulous cycling everywhere: Yorkshire’s a grand place.